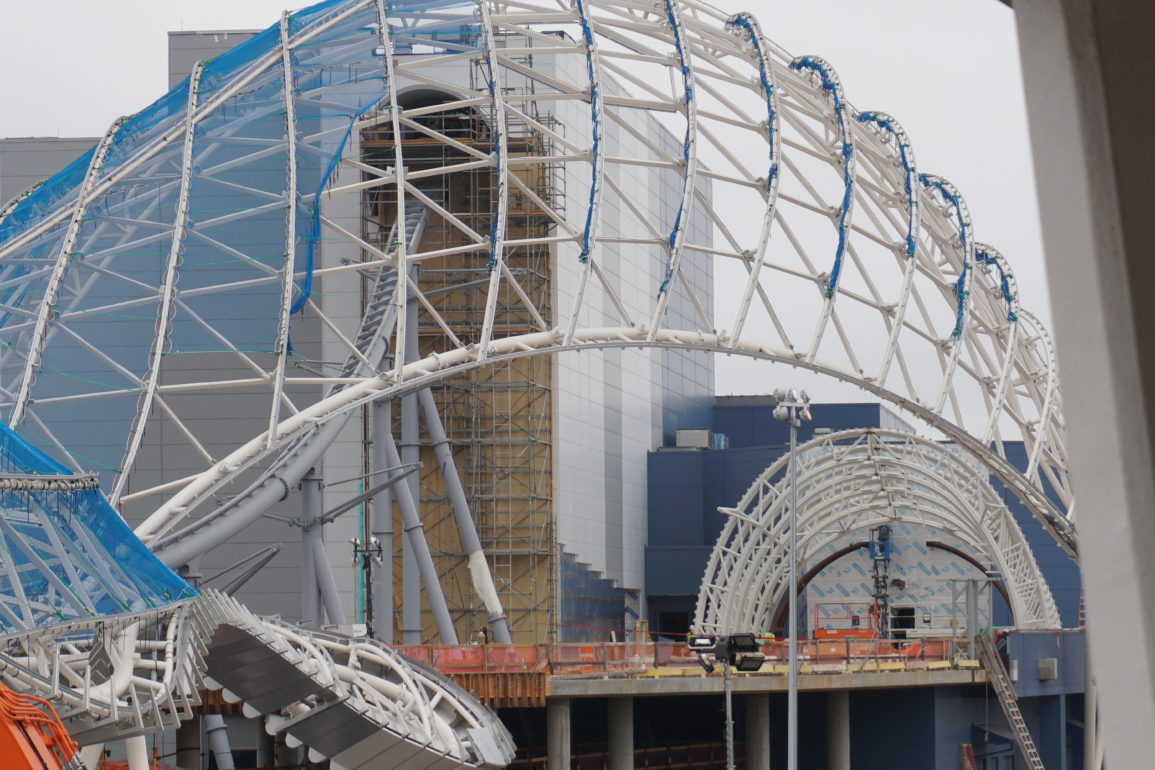 We may have to wait another year to actually ride TRON Lightcycle / Run at Magic Kingdom, but construction has been moving steadily on the exterior of the attraction in recent weeks.

From the Monorail, we could see construction vehicles parked behind the show building.

We also got a look at the crane towering over the guest entrance to the building.

The crane is being used to build the entrance canopy.

From the PeopleMover, we saw crew members in cherry-picker vehicles beneath the canopy.

They have been installing pieces along the edge of the framework that will hold the future opaque canopy. They have also installed tubing along the edges.

On the ground, many crew members were working on the walkway leading up to the coaster.

The walkway is mostly wood and rebar right now.

Some crew members were working on the floor of the walkway.

Scaffolding is in place for the Walt Disney World Railroad tunnel beneath the coaster (on the lower right in the image above). The tunnel has been paved, and work is underway on the walls.

Some of the blue netting has been removed from the canopy framework near the show building.

Some strips of netting remain attached to the framework.

Behind the canopy, scaffolding remains around and beneath the coaster’s entrance into the building. Brown paneling is now behind the scaffolding.

We saw more crew members working on the main entrance tunnel, which has another arched piece.

On the other side of the construction site, more paneling has been added to the mysterious small structure.

The stairs used by crew members have been moved while paneling continues to be installed.

Are you excited for TRON Lightcycle / Run to eventually open? Let us know in the comments.

Next
PHOTOS: Repainting Begins on Poseidon’s Fury Façade at Universal’s Islands of Adventure