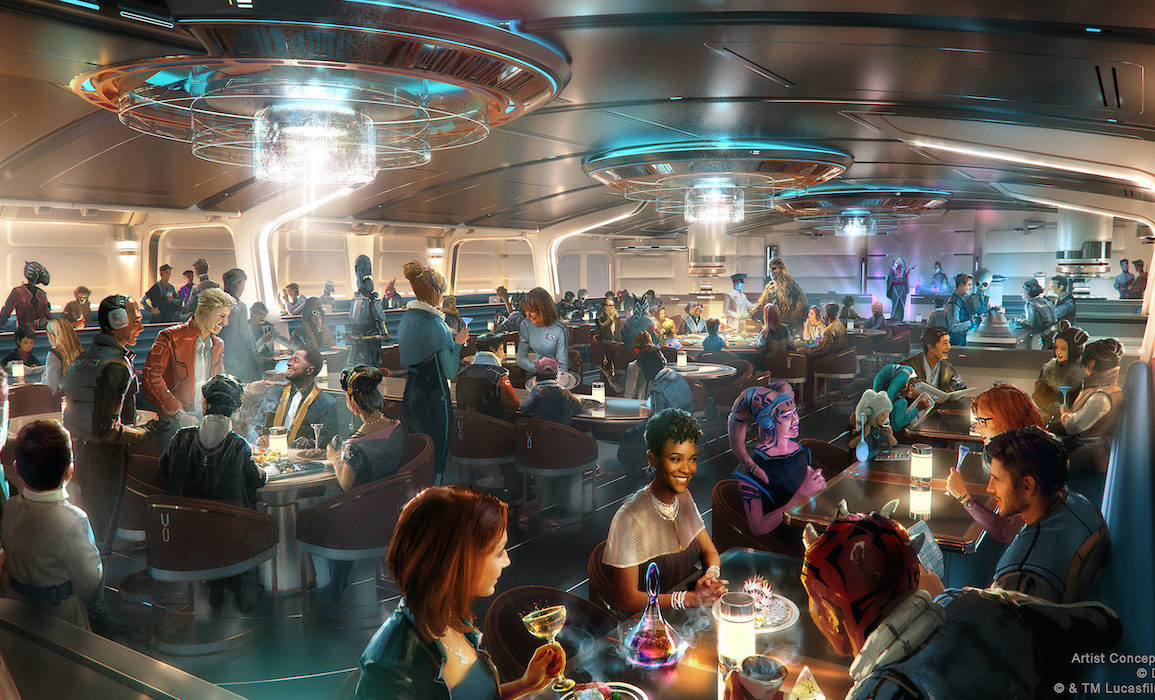 This artist concept rendering does not represent current operational guidelines or health and safety measures such as face covering and physical distancing requirements. Guests experiencing Star Wars: Galactic Starcruiser – opening in 2022 at Walt Disney World Resort in Lake Buena Vista, Fla. – will have fantastic meals in the Crown of Corellia Dining Room, seen in this artist concept rendering. The enticing supper club is a bright and welcoming hall offering menus of both otherworldly and familiar origins. One night’s dinner will feature a live performance from a galactic superstar. (Disney/Lucasfilm)
Home
Parks & Resorts
Walt Disney World Resort
Hotels & Resorts

Star Wars: Galactic Starcruiser Having Trouble Hiring Experienced Waitstaff Due to Wages and Other Concerns

Disney may be hoping for smooth sailings once the Star Wars: Galactic Starcruiser opens on March 1, but they’re facing yet another struggle to get off the ground. Waitstaff are in seemingly short supply as experienced Walt Disney World Cast Members hesitate to leave their current positions.

Reportedly, servers have expressed concerns about the working conditions and wages. The environment is different from a normal restaurant, and even that of a cruise ship as Disney has been comparing to the two-night experience. There are concerns about working shifts in a windowless room (the artificial windows will give diners a view of space, but no sunlight).

Additionally, potential waitstaff are concerned about leaving money on the table, so to speak. Doubts are being cast on whether the gratuities will be comparable with their current locations. Waitstaff often rely on gratuities to make up the difference for the reduced wages. The exact pay rate for the Starcruiser waitstaff has not been released to the public. With only 100 rooms onboard, the reduced turnover plays into the calculations as well.

As a result, Disney may have to resort to hiring inexperienced servers for the Crown of Corellia Dining Room.