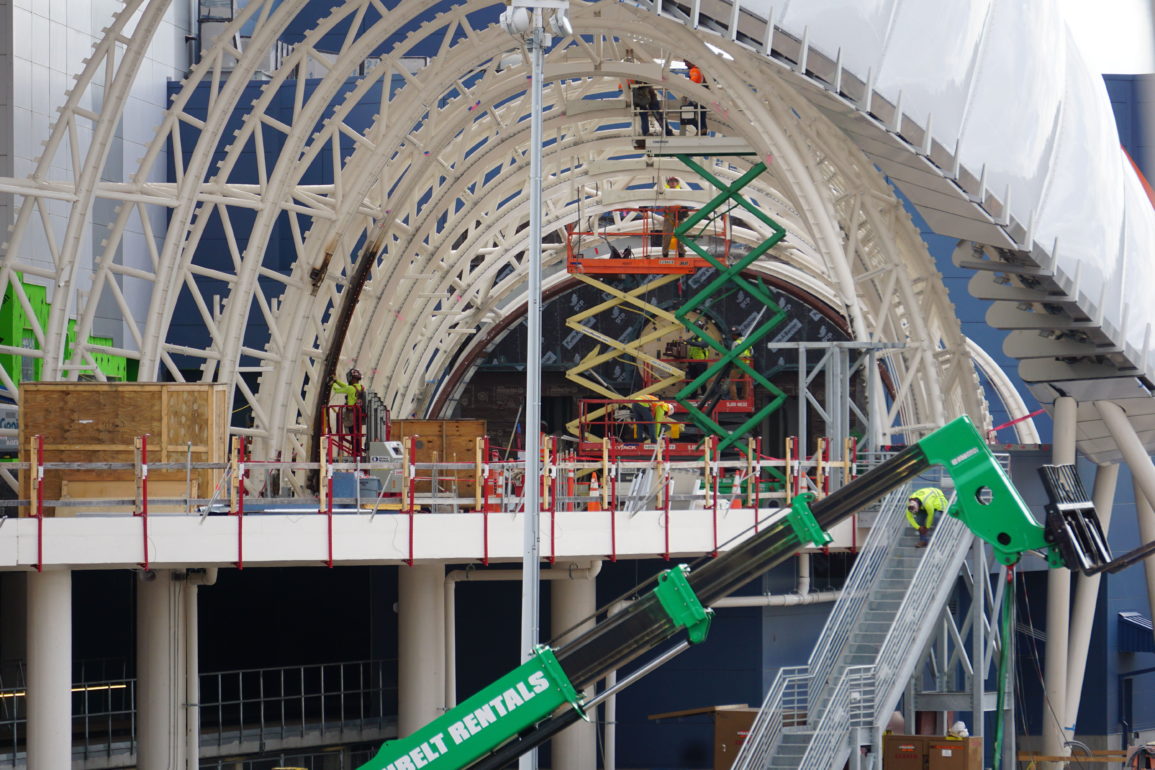 The Walt Disney World Railroad at Magic Kingdom has been closed for over three years while construction continues on TRON Lightcycle / Run, a new coaster in Tomorrowland. The railroad will go under the coaster thanks to a new tunnel.

A smaller canopy framework leads to the coaster’s entrance, but crews have yet to install an actual canopy there.

We could see crew members in scissor lifts this morning working on the white framework.

Above the actual entrance, black weather-proof sheathing remains exposed and crews were working on a circular shape.

Guests will enter the coaster through the show building and board it inside.

The coaster will then launch from beneath the walkway.

Speaking of walkways, crew members have been constructing a long curved wall outlining a future sidewalk.

This second walkway will go beneath the first and may connect Tomorrowland to Storybook Circus.

The main walkway is getting another layer of paving.

We can see slightly elevated sections that crews recently paved.

Next to the main walkway is the Walt Disney World Railroad tunnel.

A curved roof now covers most of the tunnel.

A green construction vehicle sits at the entrance to the tunnel.

We could see ladders and crew members inside the tunnel.

Meanwhile, construction crews are working on the side of Tomorrowland Light & Power Co.

Guests will walk past or through the store to reach TRON Lightcycle / Run.

Crews removed decorative elements from the exterior of the store and hung tarps all over it.

The side doors are now uncovered but remain blocked inside.

A construction wall blocks the pathway from guests, but the store remains open.

In Storybook Circus, we can see the other end of the Walt Disney World Railroad tunnel.

Crew members were working above the tunnel on the walkway.

The walkway remains surrounded by a temporary wood railing.

We previously saw construction vehicles back here, but they have now left.

Much of the Walt Disney World Railroad track was replaced last year and Engine 1, the Walter E. Disney, was refurbished.

The refurbished engine has been used to test the new track throughout Magic Kingdom.

There is no announced opening timeframe for either TRON Lightcycle / Run or the Walt Disney World Railroad at Magic Kingdom.

Next
UPDATE: Walt Disney World Annual Passholders Will Have to Show My Disney Experience for Dining and Merchandise Discounts