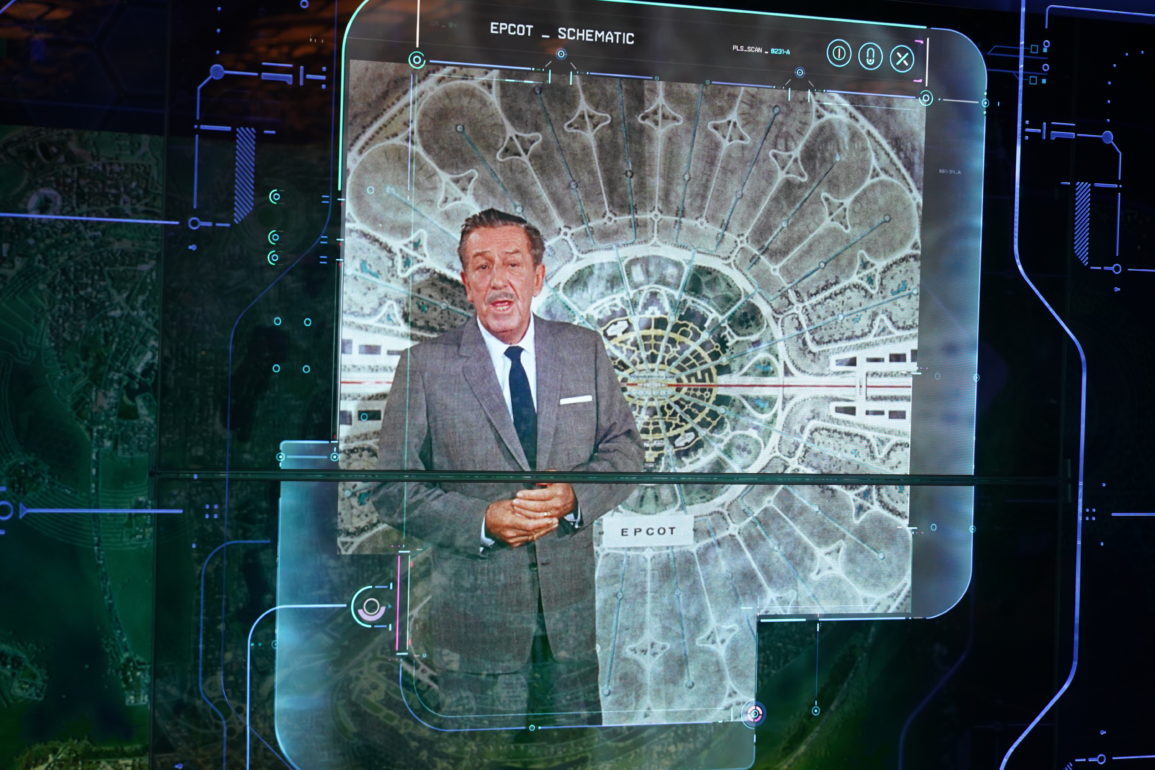 The death of the original vision of EPCOT has been proclaimed many times: the closure of Horizons and the first Journey Into Imagination, the introduction of attractions based on intellectual properties, and the moment I personally consider the end, the conclusion of IllumiNations: Reflections of Earth. Either way, no matter when you think it happened, EPCOT Center, Epcot, and all that it has ever been are long buried now, survived by a few museum pieces in Spaceship Earth, Living with the Land, The American Adventure, and Impressions de France. Guardians of the Galaxy: Cosmic Rewind is the greatest leap away from the park that was, purely into the realm of fantasy.

The Wonders of Xandar pavilion is supposed to be a legitimate World Showcase pavilion, in this case, an Other-world Showcase one, where the people of this far away planet are presenting their incredible technologies to the population of Earth, here called EPCOT Terrans (or EPCOTians jokingly at one point). Mission: Space does send guests into a vision of tomorrow once you step inside, but entering this pavilion blends our world with that of the Marvel Cinematic Universe. The queue takes itself seriously, presenting “educational” narration over the exhibits guests pass.

In fairness, many attempts were made to tie some actual facts about our solar system to the imaginary one presented inside, but it is unlikely a guest will take away any factoids from this. It’s clear that edutainment aspects about the solar system and city planning are an attempted tie to EPCOT of old, both the Universe of Energy and Walt’s vision of a city of the future. It’s nice that it is referenced, but to long time fans, it will feel forced. The most forced fan service comes from some dialogue Star-Lord delivers about wanting to see Horizons, the Energy dinosaurs, and “the Veggie Veggie Fruit Fruit.” It is horribly delivered and will make anyone who actually visited EPCOT in the 1980s wince.

The acting is horrendous in some places, with theories claiming that Imagineers had very little time to film with the stars of the movies. The pre-show has some groan-worthy jokes in it, while the main ride provides some actual laughs from the Guardians gang. There are also some tremendous inside jokes, should there be a slight delay on the ride. At one point, Rocket even made light of the fact that we were in a dark tunnel waiting to launch.

The queue looks an awful lot like Space 220 and the 2012 Test Track in places. The Galaxarium is meant to be this “wow” moment, but it is little more than a projection on the ceiling. The room is cold and lifeless beyond this, a cavernous empty space. The following room, the Xandar Gallery, on the other hand, is fantastic. A beautiful model of a Xandarian city, a Nova Corps Starblaster, and the Milano are photo-worthy props, while interesting forms of “illusioneering” with projections really place you in another world.

The pre-shows are well produced. The dual-projection surface in the first room has some neat effects that the more eagle-eyed guests will notice and enjoy, while the second pre-show provides a big “wow moment” no one can miss. The narrative of a race from space coming to Earth to show off a interplanetary teleportation system is shockingly similar to the premise of the ExtraTERRORestrial Alien Encounter, but honestly, I am here for it.

WDI figuring they could just decide on the villain and some plot points later since they would just be media played on flat surfaces. This worked out in the end, but a few audio-animatronics would’ve really put this over the top. There is something lost when every character encounter in the entire experience is through a screen or projection. It doesn’t allow guests to connect with the character and feel much emotion in my opinion.

As for the ride itself: it is very, very fun. The ride system is a game changer and I can’t wait to see them do something more grandiose with it. The ability to freely spin to face scenes is a fun element that could be utilized to deliver the world’s next immortal E-Ticket rich in storytelling, like Pirates of the Caribbean or The Haunted Mansion. Here, it accomplishes something I would equate to a modern version of Space Mountain, and I wouldn’t be surprised if a version of this is what Tokyo Disneyland has ordered from Imagineering to replace their nearly-40-year-old coaster.

I am not a huge fan of the overuse of projection technology, but it is clear at this point that they can achieve nearly anything with it. Projection scenes go on seemingly forever, following the cars around the gravity building that houses the ride. I would say the first attempt at something like this was Space Mountain: Ghost Galaxy and Hyperspace Mountain at Disneyland, where a space creature or TIE Fighters appear to follow you, as best could be achieved with the technology of the time in an existing ride. TRON Lightcycle Power Run in Shanghai took this to the next level, having another lightcycle race against you almost seamlessly. Cosmic Rewind perfects this technology, thoughtfully spreading scenes out before your eyes, while the rotating cars ensure everyone in the train sees everything that is going on. As poorly as Mickey and Minnie’s Runaway Railway shows every guest what is happening in the story is as good as Cosmic Rewind is at making sure everyone gets the full show. I do worry that the TRON ride at Magic Kingdom will look a little out of date with this down the road, while also having a WAY shorter ride time, but the Lightcycle vehicle may be novel enough to win guests over.

The entire Cosmic Rewind roller coaster ride is wildly fun, and how could it not be as it presents the world’s most expensive roller disco. The smoothness of the cars spinning and speeding down the track combined with groovy musical hits does create this roller rink party vibe that will leave anyone smiling, even a supposed curmudgeon like me. If you don’t know what a roller rink is, well, that’s what Wikipedia is for.

The few times the train circles physical props are magnificent, a taste of what could be with a larger budget and more elaborate scenes. Sitting at Connections Eatery after my four rides, I overheard some kids talking about the spin around the moon being their favorite part. I was happy to hear this from younger guests as I think it reaffirms that physical props elicit the strongest emotional reactions. I fully understand that some of the scenes in the ride are too big to be presented physically, and projections have their place in this art form, but less reliance on media can be a good thing.

Guardians of the Galaxy: Cosmic Rewind is what many would call a “gate-buster attraction”. It will draw huge crowds to EPCOT, they will leave it clapping and smiling, and they will ride over-and-over to hear all of the different musical tracks. When it starts to feel dated, the projections can be changed to display anything, whether it’s a different Guardians of the Galaxy tale or even something completely different with another intellectual property. In short, what has been a sleepy corner of EPCOT for decades is now going to be the most trafficked.

I want to hate Cosmic Rewind as I know it is another step away from a park that was so special, probably amongst the three best Disney has ever built including Disneyland Paris and Tokyo DisneySea, but it is clear this is a new park. It is time to simply accept that this is a different place built in the spot where EPCOT Center was, not the park we have visited for years. What happened to Disney’s Hollywood Studios has happened to this park: it was rebuilt to purely exploit the latest Disney properties and nothing more. Luckily, Walt Disney Imagineering is still full of talented people who can execute fun and engaging experiences despite this creative stifling.

If you miss original storytelling, I’d recommend you expand your theme park horizons and save up for that trip to the more traditional Disney theme parks elsewhere that boast their own unique versions of classic attractions, as well has some IP-free masterpieces we likely won’t see again stateside. If you’re visiting EPCOT, don’t expect to learn, just expect to eat, drink, and have fun.