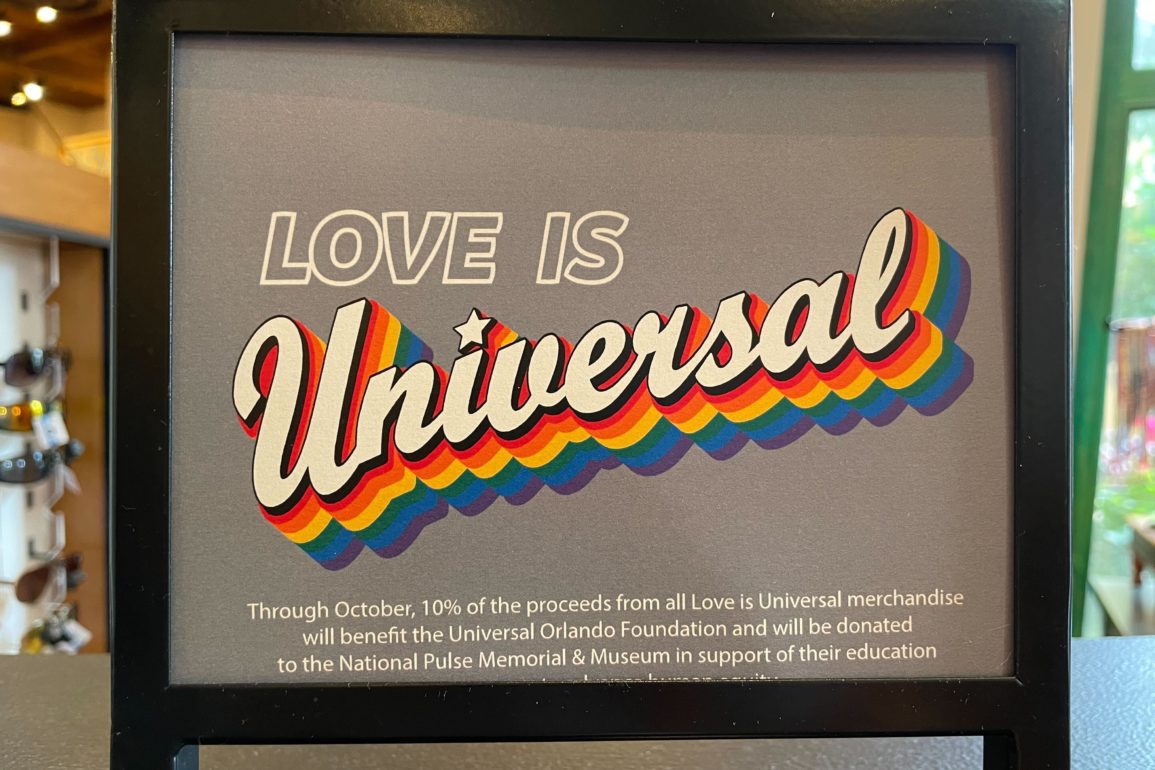 Several Universal Orlando Resort Team Members were killed in the Pulse nightclub shooting on June 12, 2016. A window in the park is dedicated to them and proceeds from this year’s “Love is Universal” collection will be donated to the National Pulse Memorial & Museum. Despite that, the company has remained silent on LGBTQIA+ issues this year in particular.

While The Walt Disney Company has taken heat this year for their contributions to all sponsors of the bill and initial failure to condemn it, Universal has been largely ignored. Comcast, the parent company of NBCUniversal, donated to many of the same politicians as Disney.

Taran, who is queer and also works for Disney, started their thread by tweeting, “So I quit Universal last night so I can now share this.”

They explain that, during a mandatory company meeting last month, they asked leadership “what the company was doing in the wake of the silence to the ‘Don’t Say Gay or Trans’ bill and would do to honor LGBTQ employees & guests during Pride month after their silence.”

“Not only did I get an incredibly round about answer,” they continued, “where I was told that while personally they disagreed with Desantis’s bill, they didn’t want to ‘continue the political debate’ and chose silence [a]nd I could go to the company and Comcast websites online to see the offerings they had for LGBTQ employees and what the company did for LGBTQ people and what they were planning for Pride month. Which they couldn’t tell me in any detail what those would be or even hint at.”

Taran says they remember “shutting down after that answer because I had never felt more dismissed or given the run around in my life.” They said that for days after this incident, coworkers told them they appreciated what they said and that the conversation was necessary.

“So while I was annoyed with the higher ups,” they wrote, “I felt like I wanted to stay because atleast I had the support of my team members and they were really great people.”

This last Sunday, Team Members got an email about what the company was doing for Pride Month. Taran says they “hadn’t been as incensed by an email since everything that first went down with Chapek.” Universal stated in the email that they would be hosting four workshops for Team Members about LGBTQIA+ issues, but no meetings to introduce staff to their resource group for LGBTQIA+ Team Members and allies. They would also be “centering higher up leaders in the company,” Taran wrote.

The third workshop planned was about “how we can better honor” the memory of the victims of the Pulse shooting. They were shocked by, “the absolute audacity at that after everything with what the CEO herself said last month and the silence before? Absolutely galling.”

They recently checked on the scheduled workshops and found that since the email, the one about Pulse is no longer on the calendar. Only three workshops are now listed.

Taran spoke to several of their coworkers over the last few weeks and decided, “I don’t want to be in a company where so many in leadership choose silence over action, even while team members are begging to be heard.”

As for why they are choosing to stay at Disney, they wrote, “[D]on’t get me wrong, I’m not happy with how the high management has done things. I’ve been clear on that. But since 2020, I’ve repeatedly seen my immediate leaders and mid-level management [at Disney] show that they are listening and caring. To show by their actions they believe in inclusion and want to, within the confines of the system, make that possible.”

“It’s going to work,” they went on, “and in multiple locations almost a year after the Key of Inclusion being announced and having permanent installations talking about why pronouns are so important and showcasing the different pronouns of cast members in your department. [A]nd having multiple booths led by members of marginalized groups and supporters sharing about their culture, how representation is so important, [then] providing info for ways we can help or get connected to support groups.”

They also reference Disney Cast Members and employees speaking up about Chapek’s silence, including employees at Pixar and Disney Animation, stating these are things “I never saw nor heard while at Universal these last several months of working for them.”

Taran says that they heard a lot of talk about Universal championing diversity, but never saw this in action. According to Taran, support groups for LGBTQIA+ Team Members never have physical events, so seem more like an online forum, and diverse Team Members in leadership positions were frequently “stonewalled” when trying to make changes and burnt out of their jobs.

They cite another example of Universal’s failure to listen to Team Members: the wardrobe for The Wizarding World of Harry Potter. It took until this year for Universal to change the costume policy for the land, where Team Members were required to wear dark winter clothing in the summer heat.

“Anyway I’m back now to working for the [mouse],” they conclude, “as my only job because even with all the difficulties with upper management, I still witness and hear more advocating going on internally and seeing greater pushes for positive changes here than I have on the otherside[,] and where I feel that my voice is actually heard and I’m not alone like I did in that packed auditorium, with every eye looking at me and wondering why in the world I would bring that up now?”

Anna Eskamani of the Florida House of Representatives responded to the thread, saying, “Thank you for sharing your story, and for your advocacy too. We need it now more than ever.”