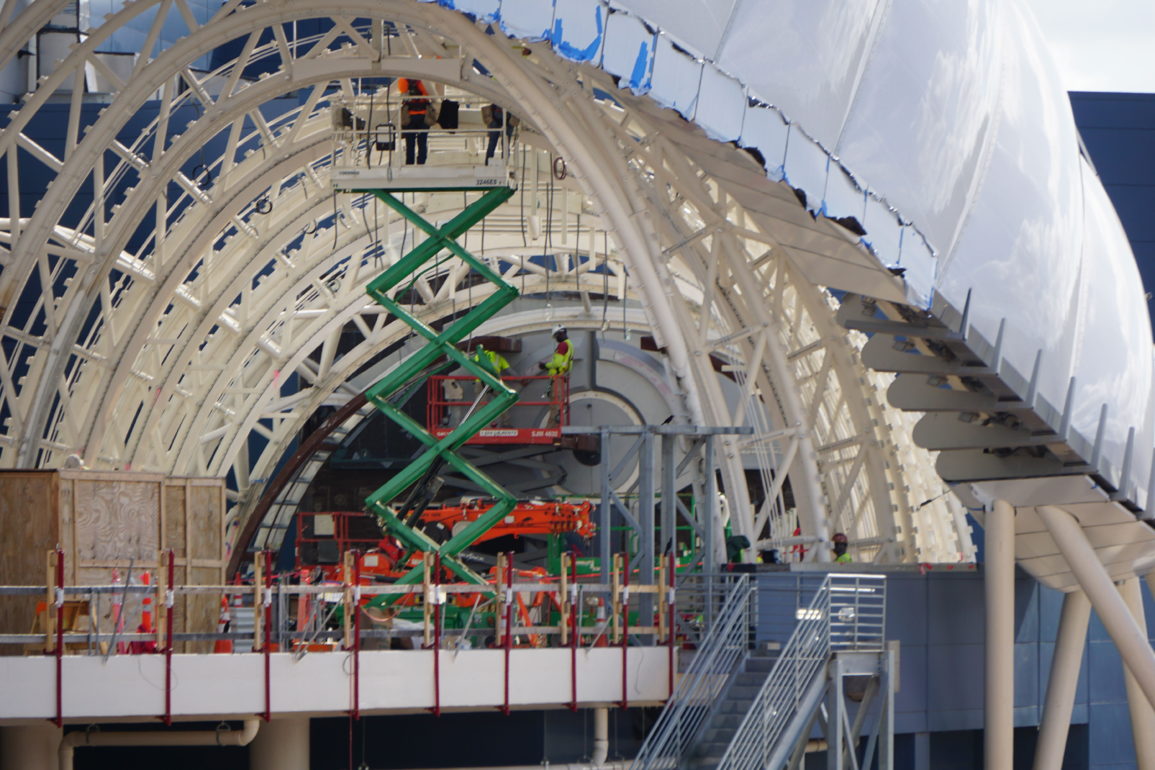 Crews have added themed elements to the entrance of TRON Lightcycle / Run at Magic Kingdom.

From the Tomorrowland Transit Authority PeopleMover, we can see new white pieces at the entrance, covering the weather-proof sheathing.

Crew members in scissor lifts were working on the entrance and the canopy framework above.

There are two silver circles, one inside of the other, and a black circle at the center.

In the story of the ride, this frame supports the device that transports guests into The Grid (the digital world of TRON).

Some black sheathing is still visible behind the new themed elements.

Meanwhile, another group of crew members were gathered at the walkways near the rest of Tomorrowland.

One paved walkway leads to the lockers building and the entrance, while another walkway will lead to Storybook Circus.

The Walt Disney World Railroad will go through a tunnel beneath the coaster.

The seemingly final piece of curved roof was recently installed on this side of the tunnel.

We could see several crew members working inside the tunnel.

Crews also continue to refurbish the side of Tomorrowland Light & Power Co. Guests will walk past the Space Mountain store to reach TRON Lightcycle / Run.

Spring is in the Air at Tokyo Disney Resort from April 1 to June 30 with Disney Easter, Springtime D...February 19, 2022
EDITORIAL: Bob Chapek Is Trying to Change His Legacy From Bean Counter to Innovator, But Is It Too L...February 18, 2022
Disneyland Paris Adds Park Reservation Waitlist for Annual PassholdersJune 13, 2022

Previous
BREAKING: ‘The Princess and The Frog’ Splash Mountain Replacement Will Open in 2024 at Disneyland, Magic Kingdom