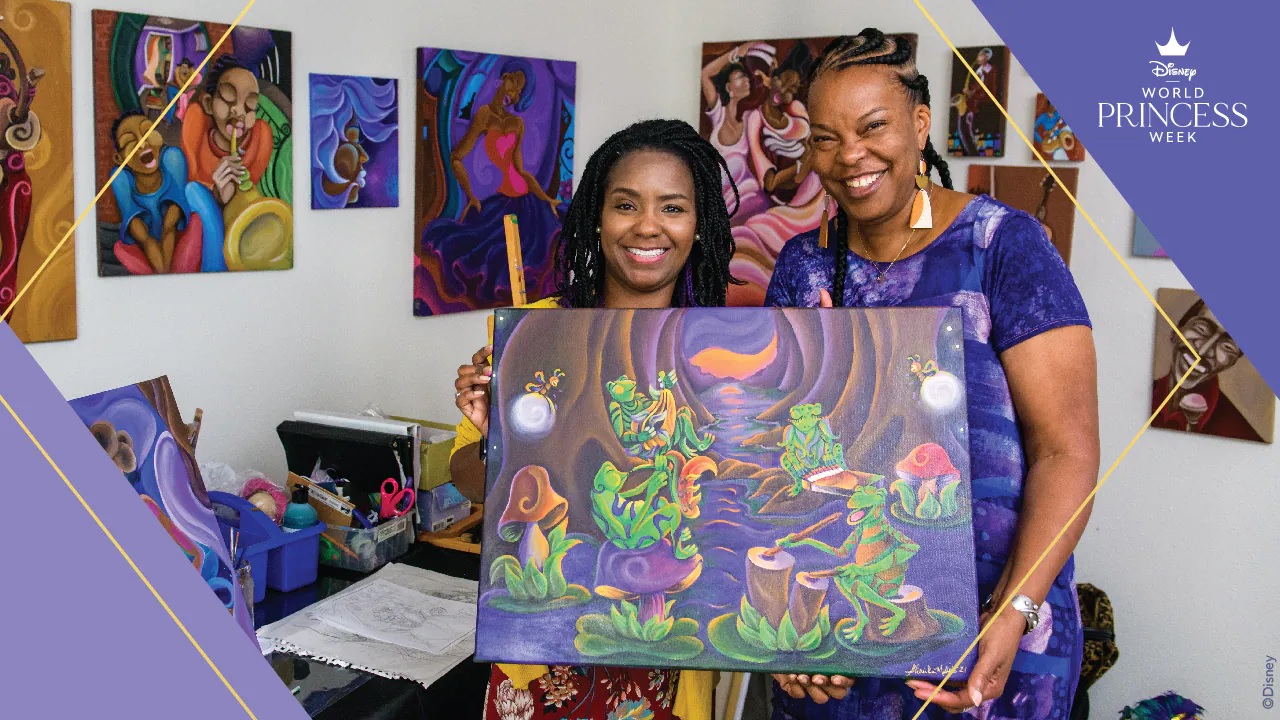 Walt Disney Imagineering is turning to a New Orleans artist to create art that will help inspired the look of Tiana’s Bayou Adventure coming to the Magic Kingdom and Disneyland in 2024.

We’re taking a trip to the enchanting city of New Orleans for another look at Tiana’s Bayou Adventure – an all-new adventure inspired by Walt Disney Animation Studios’ film “The Princess and the Frog.” We’re excited to share a unique dimension evolving around Tiana’s next chapter at Disney Parks, and one that I’m particularly proud to share during World Princess Week: a painting inspiring our Imagineers with the fresh perspective of New Orleans artist, Sharika Mahdi.

As we announced at ESSENCE Fest, Tiana’s Bayou Adventure is coming to Magic Kingdom Park in Florida and Disneyland Park in California in late 2024. Guests are joined by a cast of friends – new and familiar – as they prepare for their first-ever Mardi Gras performance. Much like the story unfolding within the attraction, our team’s own journey has been enriched with a bit of magic and some help from our friends. To ensure this experience authentically reflects the real-life inspiration of Tiana’s story, Imagineers have consulted and collaborated with a host of academics, musicians and artists across the New Orleans region.

When our Walt Disney Imagineering project team first looked for local inspiration, we were drawn to the work of an incredibly talented artist, Sharika Mahdi. Sharika has contributed a unique and authentic perspective to the project, capturing the essence of New Orleans through a series of original artwork commissioned by our team. “Making a big deal about everything and celebrating everything,” Sharika remarks of the region that inspires her artwork, “I want to show this is what it’s about, being a part of New Orleans and being a part of the culture.”

Sharika was introduced to Walt Disney Imagineering through the esteemed YAYA (Young Aspirations Young Artists) youth art program, an organization that empowers creative youth in New Orleans through visual arts education combined with entrepreneurial and life skills training. An alumna of YAYA, Sharika’s unique composition and bold color techniques caught our team’s attention. The series we commissioned will serve as a source of inspiration to the Imagineers responsible for bringing Tiana’s story to life.

During a recent visit to New Orleans, I joined Charita Carter, executive producer at Walt Disney Imagineering, to pay a visit to Sharika. It was here that we were treated to a tour of her studio and a first look at the second piece of artwork commissioned in this series: a jazz club scene with an ensemble of affable amphibians (the first piece in the series was shared during World Princess Week last year). It’s a delightful painting that lovingly illustrates the jubilance and liveliness of this musical city.

During World Princess Week, we reflect on Disney’s beloved canon of heroines, and the courageous and compassionate mark they leave in our legacy of storytelling. Tiana’s Bayou Adventure builds on the story of Princess Tiana, a character whose pride and perseverance reminds us of a universal truth: within us lies the potential to make our dreams come true.

As an African American woman in pursuit of her own creative ambitions, Sharika connects with Tiana on this very meaningful level. Similar to how Tiana reached so many through her culinary gifts, Sharika adds that she “always wanted to reach more people and inspire more people with [her] art.”

This beautiful collaboration between Walt Disney Imagineering and Sharika Mahdi will be sure to reach and inspire all Disney Parks guests that experience Tiana’s Bayou Adventure once it opens in late 2024. Thank you for joining us on this journey as we celebrate World Princess Week all weeklong.