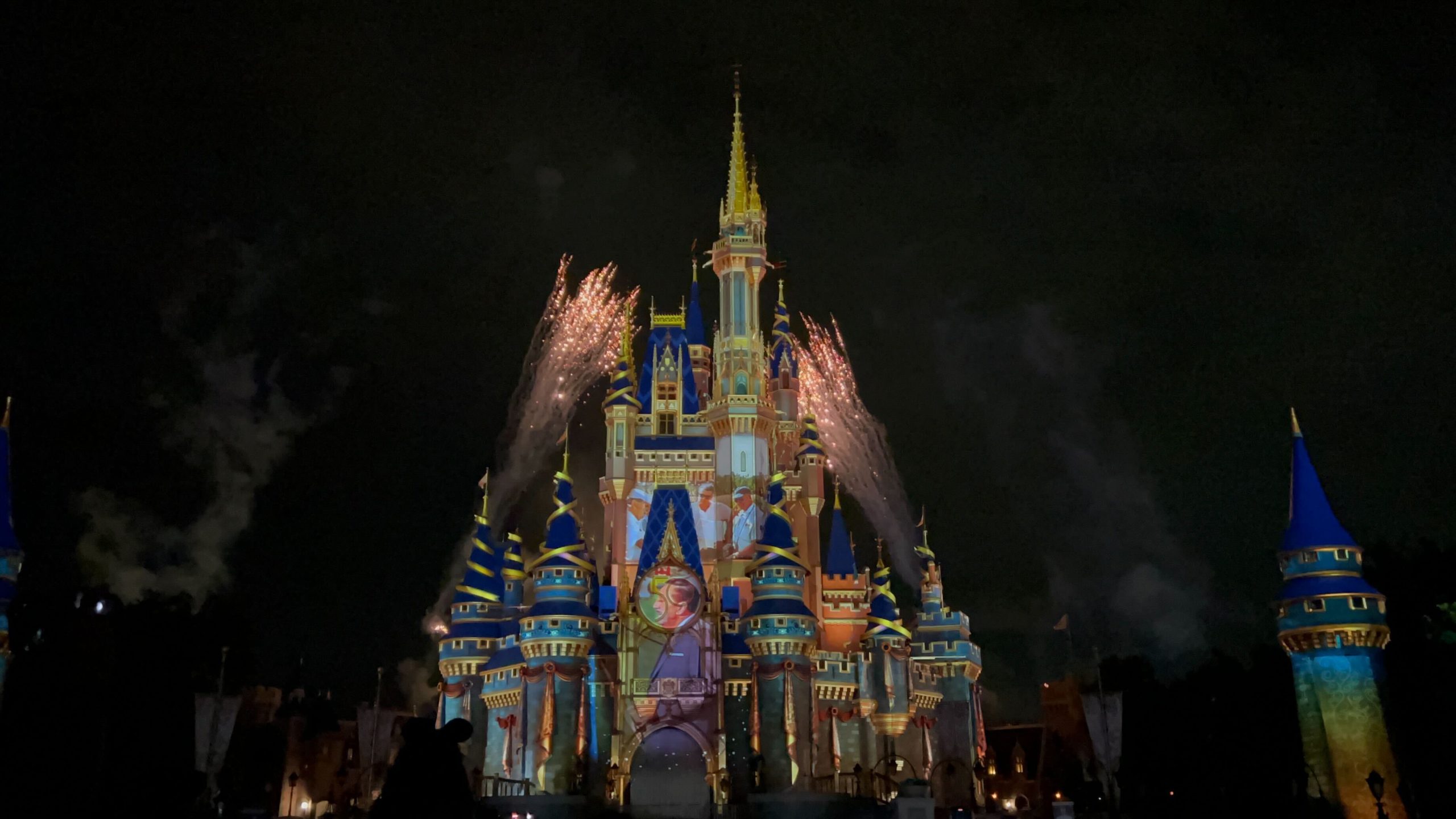 Nearly a year after its debut, “Disney Enchantment” has added a new sequence to celebrate Walt Disney and his brother Roy, who were both instrumental in the creation of Walt Disney World. There’s also new pyrotechnics, updated narration, and even an appearance by the main mouse himself!

You can watch the updated sequences in our video above or keep reading for photos and more details!

“Disney Enchantment” begins as it always has with a triumphant fanfare of the show theme song “You Are the Magic,” with two fireworks exploding at its conclusion. But instead of leading into “You Are the Magic”, we skip straight to Angela Bassett welcoming guests to the park, as she used to after the song. Her lines are slightly altered, now saying “Good evening. Tonight we gather in a most enchanted kingdom. One overflowing with magic. And once upon a time, it all began with a dream.”

New projections light up the castle to “When You Wish Upon a Star” before images of the “it’s a small world” clock face and Sleeping Beauty Castle at Disneyland appear. Over the music we hear “Yesterday, Disneyland and the New York World’s Fair. Tomorrow, a project so vast it has already been called a whole new Disney World” as images of the early Florida Project map appear.

A famous photo of Walt, Roy, Joe Fowler, and Card Walker surveying the future site of the Magic Kingdom appears as clips of the iconic EPCOT film play below.

Walt Disney points up as the entire castle is covered in blue. Icons from classic attractions sing brief bars from “Yo Ho (A Pirate’s Life for Me)”, “it’s a small world”, “Grim Grinning Ghosts”, and “There’s a Great Big Beautiful Tomorrow”.

The show continues with more clips of Walt Disney at Disneyland appearing on the 50 medallion while audio of Roy Disney dedicating Walt Disney World in October 1971 plays over.

Mickey balloons rise over the castle as fireworks burst.

Finally, an animated Mickey Mouse appears on the balcony to say “Oh boy, this place sure is swell! Some folks like to say that it all started with a dream. But you wanna know what makes this place real special? It’s you! Each and every one of you. Any time you set foot here, you leave this place brighter than it was before. Because you are the magic!”

The show then continues as normal… until the very end.

Instead of Angela Bassett at the show’s finale, Mickey appears once again as a balcony projection to say “You are the magic!” at the show’s climax.

If you’d like to compare to the original show, you can check out the original version from its debut last October below.

What do you think of this attempt to better honor Walt and Roy Disney and their legacy at Walt Disney World? Let us know in the comments below!