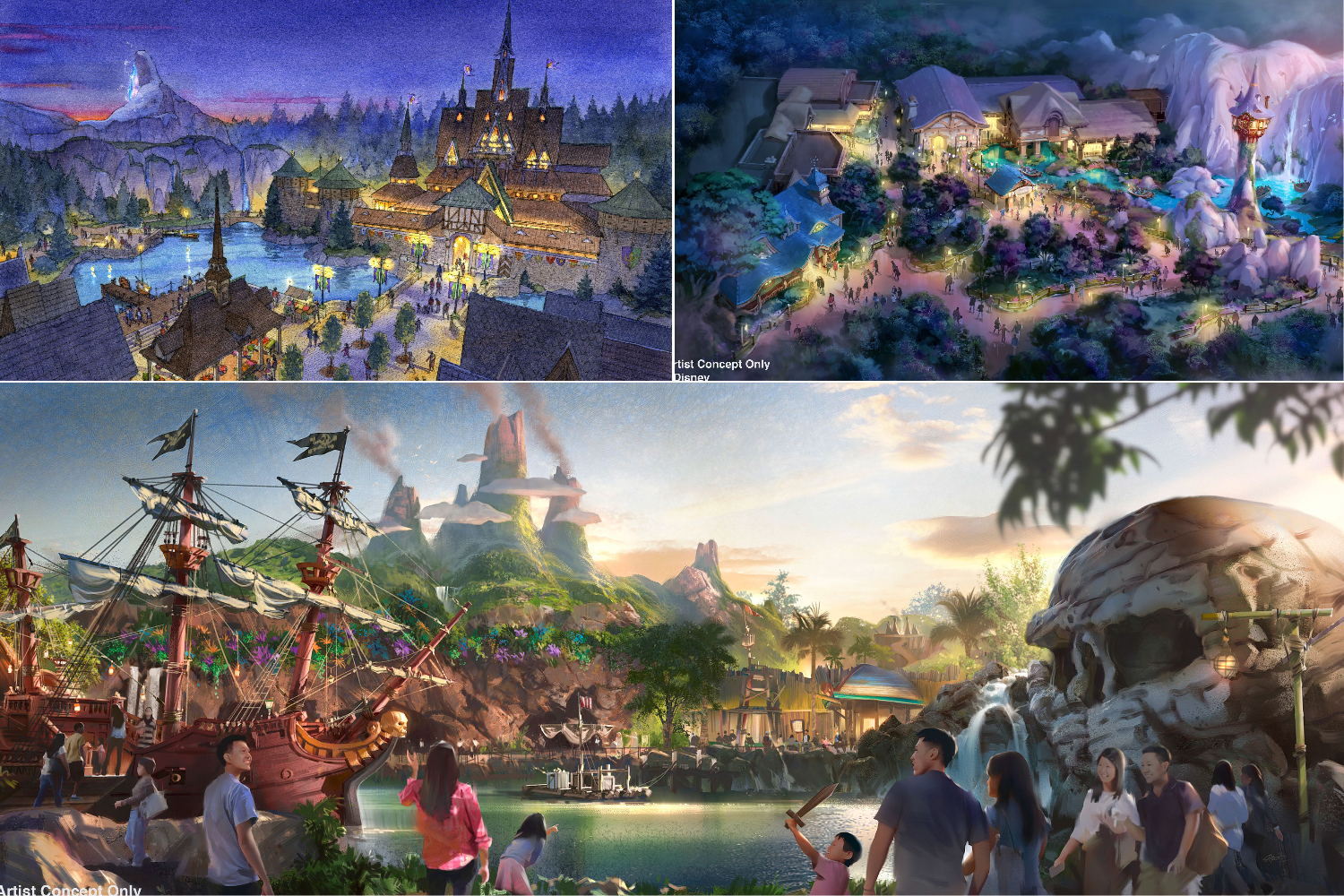 The Oriental Land Company announced today that Fantasy Springs, the massive new eighth port at Tokyo DisneySea, will officially open in spring 2024, and released a new look inside the land along with new concept art and the individual area names with in the port.

Frozen Kingdom includes both Arendelle and the North Mountain in the distance. Set between the first and second films, when Queen Elsa has embraced her magical power to control snow and ice. She has since opened the castle gates so guests can freely visit the Kingdom. Located here will be a heartwarming attraction that tells the story of Elsa and her beloved sister, Anna. Guests will board boats and experience the sisters’ heartfelt journey while enjoying iconic songs from the film and encountering surprising thrills. Also located in this area will be a restaurant set inside Arendelle Castle at the foot of beautiful, snow-capped mountains.

New drone footage released by the Oriental Land Company shows there’s still work to be done on the land, pretty consistent with our latest construction report.

Rapunzel’s Forest also features a boat ride themed to the film. The area will include an attraction that follows Rapunzel to the lantern festival and a restaurant inspired by the hideout of the humorous band of thugs who appeared in the film. In the attraction, guests will board gondolas for a romantic boat tour of Rapunzel’s “best day ever” as she journeys with Flynn to the lantern festival. Countless flickering lanterns illuminate the attraction’s climactic scene while Rapunzel and Flynn sing an iconic song from the film, building to an unforgettable finale. There also appears to be a replica of The Snuggly Duckling tavern.

In the new drone footage, we see the flume and much of the work around the boat attraction is done, along with Rapunzel’s Tower being nearly complete. There was even some water in the flume, perhaps basic testing has already begun?

Finally, Peter Pan’s Neverland will be home to a massive E-Ticket experience as well as a Pixie Hollow-themed attraction. Visible are the mountains of Neverland, Captain Hook’s ship, and Skull Rock. It’s likely that the Peter Pan E-Ticket attraction will be inside these mountains and will fly Guests over the jungles of Neverland into a battle with Captain Hook and his crew of pirates. Guests will join Peter Pan in an adventure to rescue Wendy’s younger brother, John, who has been kidnapped by Captain Hook and his pirates. Guests board boats and follow the Lost Boys down a river. When Tinker Bell sprinkles the boats with pixie dust, Guests find themselves flying through Neverland on an unprecedented adventure that features iconic music and dynamic 3D imagery of the characters from the film.

A second attraction immerses Guests in the oversized world of Pixie Hollow where Tinker Bell and her fairy friends live and work. The restaurant is inspired by the Lost Boys and their hideout, affording lovely views of Neverland that Guests can enjoy while they dine.

We can see the Jolly Roger is pretty much complete in the drone footage, and a good amount of decoration is in place on the Neverland mountains.

The hotel is officially called the Tokyo DisneySea Fantasy Springs Hotel, and is built around the magical fountain of Fantasy Springs. Paintings inside depicting Disney princesses and motifs of flowers and grasses can be seen throughout the hotel, allowing guests to enjoy their hotel stay within the parks, while retaining the Fantasy Springs experience. The hotel is actually split into two categories — a Deluxe type with 419 guest rooms and a Luxury type with 56 guest rooms offering the finest lodging experience at Tokyo Disney Resort.

As we’ve reported, much of the scaffolds are coming down around the hotel itself, with much work still left in the park itself.

You can watch the new drone footage above, and our latest construction update below.

All of this opens in spring of 2024, so start making your plans to visit and check out Fantasy Springs! Let us know if you’re excited in the comments below!