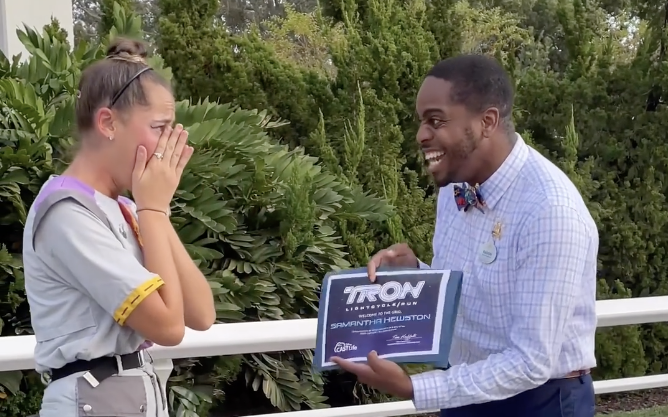 The Walt Disney World Ambassadors released a video on their Instagram of them telling Cast Members throughout Walt Disney World that they will be part of the opening team for TRON Lightcycle / Run at Magic Kingdom.

We got our first look at TRON Lightcycle / Run Cast Member costumes, as well as the ride vehicles, in late 2019 at D23 Expo.

The costume tops are black with white stripes and blue center panels.

TRON Lightcycle / Run is scheduled to open in spring 2023. New signs and themed lampposts were recently added to the construction site in Tomorrowland. The Walt Disney World Railroad has been closed for almost four years to accommodate construction but is expected to reopen before the new roller-coaster. Tomorrowland Light & Power Co., the Space Mountain gift shop, is also currently closed for a refurbishment. It will act as the gift shop for both Space Mountain and TRON Lightcycle / Run.