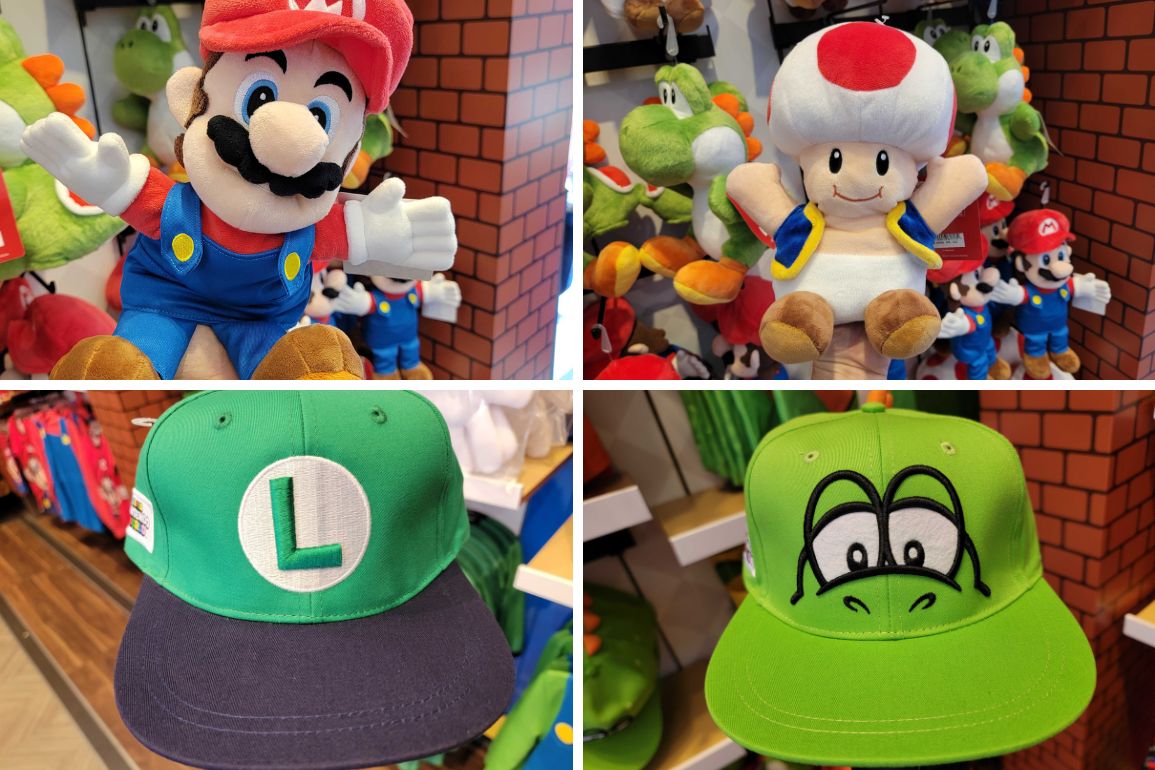 This past August, we reported that a new shop, the Character Shop, has opened on the Lower Lot at Universal Studios Hollywood. It is not far from the Warp Pipe that will take guests into Super Nintendo World in early 2023.

We visited the shop and found these adorable Mario, Luigi, Yoshi, and Toad puppets and hats now available for sale. We also found these in other shops in the park.

These are not your ordinary puppets. This charming Mario hand puppet has all the classic features of Mario Mario (yes, that’s his real last name) from the global franchise sensation, Mario.

To operate the puppet, there is a slot at the bottom of his blue overalls. You can see the opening will fit anyone’s hand comfortably.

Yoshi is a dinosaur who debuted in Super Mario World  on the Super Nintendo Entertainment System as Mario and Luigi’s sidekick.

This lovable dinosaur hand puppet is covered in soft synthetic fabric of green and white. He has a prominent snout and big eyes.

On the back, his spine is in bright orange and he has a large red and white spot in the center of his body.

The opening to operate the hand puppet is generous and lined in a soft white fabric.

Toad, who is also known in Japan as Kinopio, primarily appears in Nintendo’s Mario franchise. He’s a humanoid with a mushroom-like head. He is a citizen of the Mushroom Kingdom and is one of Princess Peach’s most loyal attendants. He is constantly working on her behalf.

As with all the hand puppets, Toad is so soft and cuddly he can also double as a comfy plush doll.

The Toad Hand Puppet faithfully recreates his iconic outfit from his prominent trait of a large head that resembles a mushroom in white with red spots down to his trademark blue vest trimmed in yellow. He also sports white pants and brown shoes.

From the red cap and center white patch with a red “M” down to the dark blue brim, this Mario character baseball hat has all the signature colors representing everyone’s favorite plumber, Mario.

On the right side of the baseball cap is a large white patch with “Super” and “World” embroidered in a colorful thread, while “Nintendo” is in white embroidery. The letters are off-set with black stitching giving them a 3-D look.

The left side of the baseball cap is left unadorned.

The back of the hat has a red plastic adjustable strap making it easily fit almost every head.

The inside of the hat carries a red, white, and blue pattern throughout. There are also vent holes on the top of the hat – reinforced in red stitching.

Not to be left out, Luigi, Mario’s younger fraternal twin brother, is represented in his predominately signature colors of dark blue and green.

The hat features a double-stitched dark blue brim and a green crown. In the center is a large white patch with a generously sized “L” embroidered in green.

On the right side of the cap, on a back panel, is the “Super Nintendo World” patch.

The left side of the cap is plain.

The Luigi Baseball Cap also has a plastic adjustable strap with coordinating green stitched air holes in the crown.

Note: a Luigi hand puppet is also available for sale.

How sweet is this hat?! Yoshi’s cap is covered entirely in lime green fabric. The front panels have Yoshi’s big, lovable eyes and black outlines for his nostrils.

The entire hat is stitched in a contrasting thread.

He also features the signature Super Nintendo World colorful patch on the right side.

His bright orange spine is just off-center from the top of the cap and runs down the back.

The inside is roomy and it also comes with an adjustable head strap – in lime green … of course.

Will you be picking up a puppet or baseball cap? If so, let us know in the comments below.