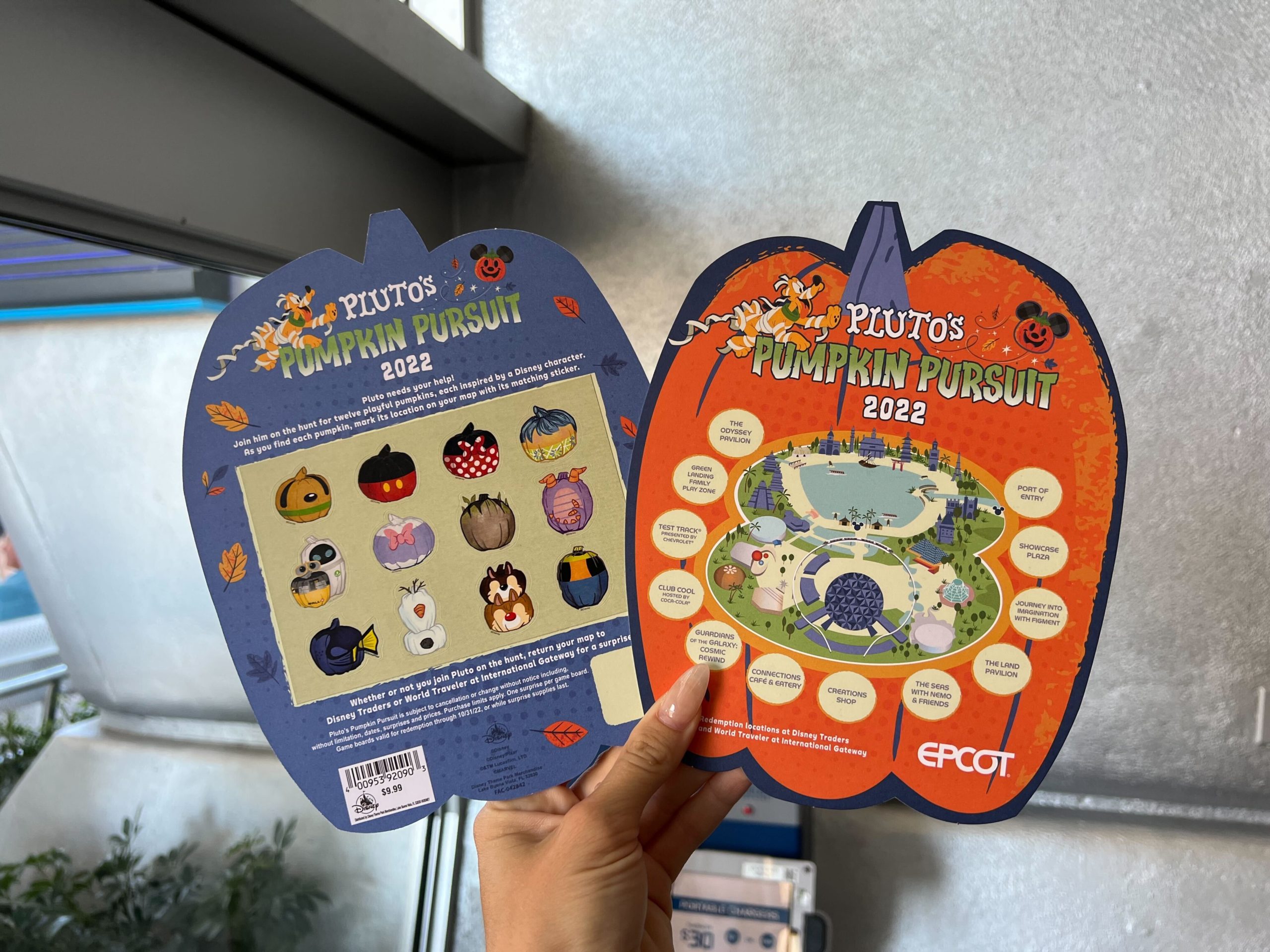 After a delay due to Hurricane Ian, Pluto’s Pumpkin Pursuit has debuted at EPCOT. This Halloween-themed scavenger hunt is originally from Disneyland Resort.

Guests can purchase maps for both Pluto’s Pumpkin Pursuit and Remy’s Ratatouille Hide & Squeak at Port of Entry, Creations Shop, and World Traveler. One map is $9.99.

The Pumpkin Pursuit may be why the Remy figures were replaced with plates.

The map for Pluto’s Pumpkin Pursuit is pumpkin-shaped, with different locations labeled on one side.

After finding a character-inspired pumpkin, place the corresponding sticker from the back onto its location.

The prizes are small jack-o’-lantern candy buckets. They are the same Pluto, Minnie, and Mickey buckets from Disneyland Resort, but the Stitch bucket is not available.

These are basically hand-sized buckets, so don’t hold much candy, but are a cute item.

They all say “Pluto’s Pumpkin Pursuit” on the back.

Now let’s get into the pumpkin locations. Don’t read on if you want to avoid spoilers and play the game yourself.

The Mickey pumpkin can be found inside Port of Entry.

It’s on a shelf above merchandise displays, next to a Vault Collection signs.

Guardians of the Galaxy: Cosmic Rewind

A Groot-inspired pumpkin is in the bushes outside Guardians of the Galaxy: Cosmic Rewind.

Minnie Mouse is on the archway above the Connections Cafe entrance in the breezeway.

The Daisy pumpkin is on the Creations Shop overhang across from Minnie.

Inside Club Cool, two pumpkins create Olaf on a shelf above the coolers.

Pluto can be found outside Test Track.

Though the map lists the Green Landing Family Play Zone as the location of these two pumpkins, they were really on the lawn nearby.

It’s a pair of WALL-E and EVE pumpkins.

Figment is, of course, at his home attraction.

He’s at the edge of the planter overhang next to the attraction entrance.

Look to the right when approaching The Land to spot these next two pumpkins.

Chip ‘n’ Dale are stacked on top of each other on the wall before the pavilion’s entrance.

The Dory pumpkin is swimming across some rocks next to The Seas sign.

A Goofy pumpkin is above one of the entrances to Brew-Wing at the Odyssey.

Finally, a Joy pumpkin is in Showcase Plaza, to the right when facing Spaceship Earth.

Will you be playing Pluto’s Pumpkin Pursuit at EPCOT? Let us know in the comments.