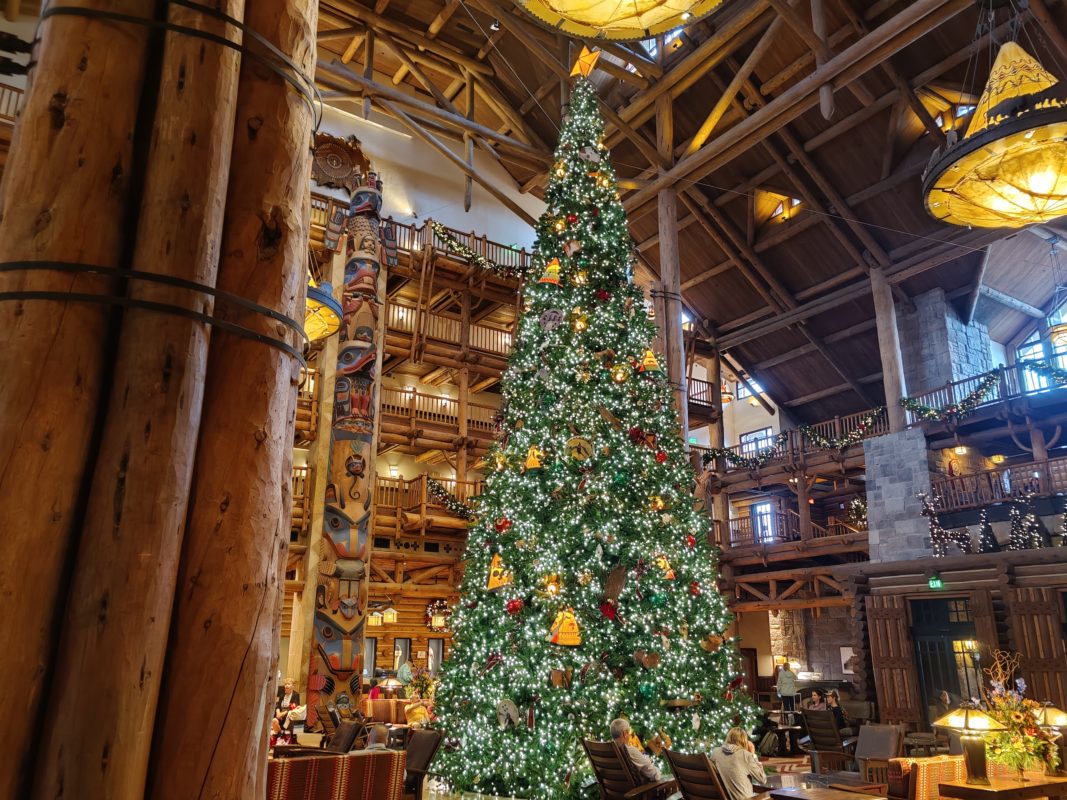 Good morning from Walt Disney World! Today, we are making our way around Disney’s Wilderness Lodge before heading to Magic Kingdom, so let’s get started!

We stopped by the resort first thing to take a peek at the beautiful Christmas tree that is now up in the lobby! It’s one of our favorite trees.

The fireplace in the lobby is also adorned with wreaths and garlands line the railings of Whispering Canyon Cafe.

We even found some friends lighting the way up above the entry way!

We found another new character hand sanitizer at Wilderness Lodge Mercantile. This one features Ariel on one side and “I’m really a Mermaid” on the other for $11.99.

Near the front of Wilderness Lodge Mercantile, Humphrey the Bear is taking over this very cute gingerbread house ornament for $19.99.

Balcony refurbishment appears to be completed on the Copper Creek Villas just outside of the main lobby. The towering levels of scaffolding have been removed to reveal the exterior of the villas once again.

Time for the next stop before heading to Magic Kingdom!

At Disney’s Polynesian Village Resort, we found more new gold frame Princess pins at Boutiki. These pins are $14.99 each.

Once we arrived at Magic Kingdom, we stopped in at the Emporium for some shopping amongst the new holiday merchandise. There is a new ceramic cake stand featuring Minnie Mouse for $34.99.

A set of three new mixing bowls is on the shelf nearby, These have some cute winter depictions including Mickey, Donald, Goofy, Pluto, and Minnie decorating a Christmas tree in the woods for $34.99.

Just across the way at Uptown Jewelers, a gold octagonal Mickey Mouse earring and necklace set is sparkling on the shelves for $39.99.

In the far back room with the hats and ears, there is a funky new White Rabbit checkered sherpa hat for $34.99.

The Confectionary is now displaying the new Pixar holiday tins near the popcorn stations. The cans come empty for $9.99 but appear to be a great holder for whatever popcorn concoction you come up with.

Curtain Call has a few new apparel items for youths including this hot pink Mickey and Minnie silhouette cardigan for $44.99.

A pullover button up long-sleeve collared shirt is $39.99 and black and white dress are also available for $44.99 for youths.

Once the park was open, we hopped aboard the PeopleMover to get a good look at what was happening down below at TRON as it’s looking pretty busy down there!

The tracks have been complete for a few days now and its been fairly common to see the Walt Disney World Railroad testing daily.

We also saw some TRON trains testing along the track today! Some of the trains had audio and some had weights as we watched them speed by.

We also found Princess Tiana and Moana pins for $11.99 each at Sir Mickeys.

On our way out of Frontierland, we spotted the Walt Disney World Railroad testing again. It’s so good to see it back!
Thanks for following along today!

PHOTOS: Disney Characters Don Special Costumes for 2022 Festival of the Holidays at EPCOT