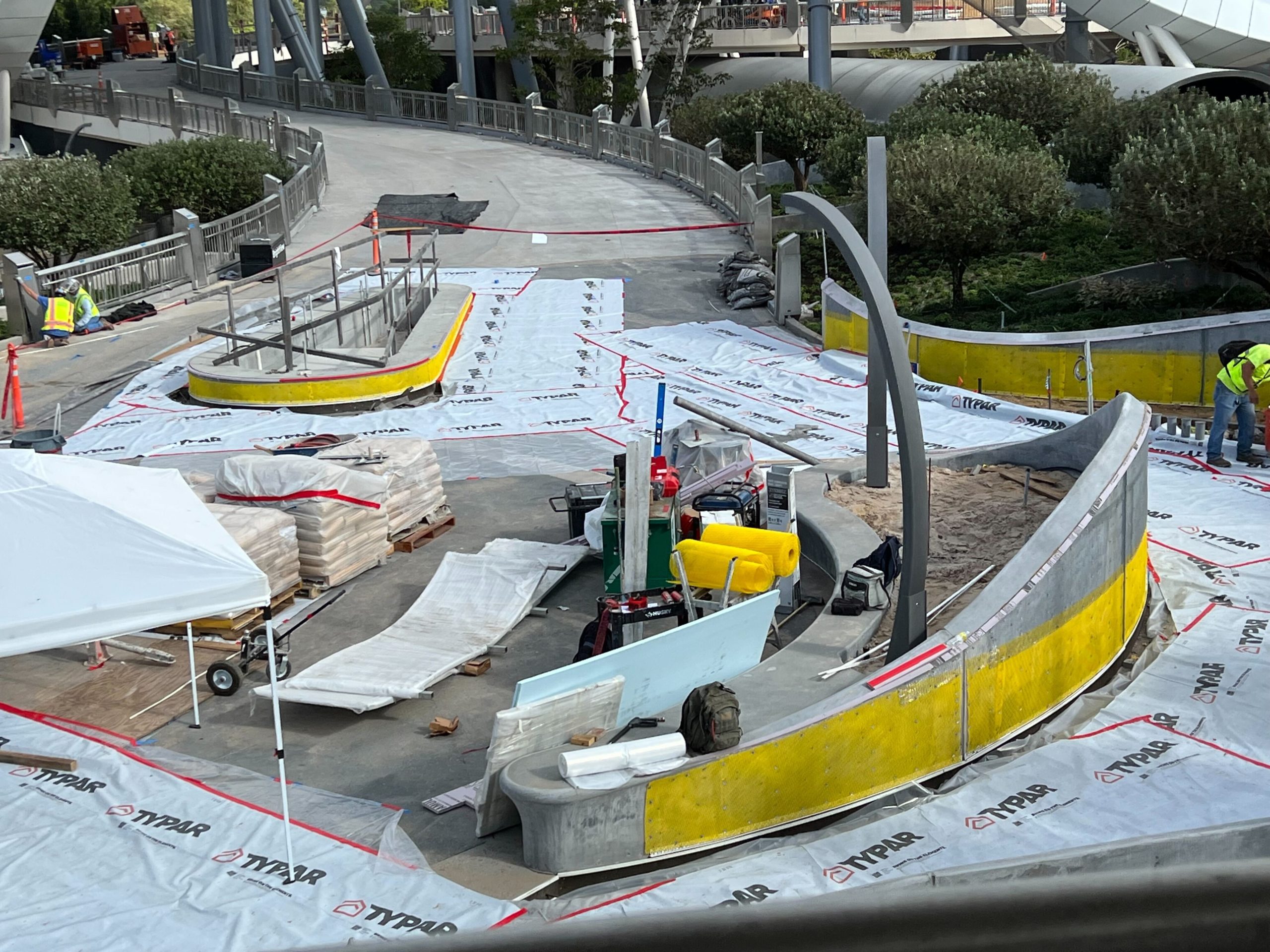 Every day seems to bring something new to the site of TRON Lightcycle / Run in the Magic Kingdom, so let’s see what’s been going on over the last two days!

Coming across to the site on the Tomorrowland Transit Authority PeopleMover, we can see the path furthest to the left is being flattened, likely ahead of paving.

More dirt has been added to the planter where we found two new themed light poles last week.

Further away from the bridge leading to the attraction, wooden markers are up on the path (as seen below the railing in the picture above).

Perhaps the biggest change is the yellow wrap going up around the concrete barriers. Tarps have been laid down around them, though the reason why isn’t exactly clear.

Moving over to the Walt Disney World Railroad, we could see protective covering on a portion of the track, as it looks like some element will connect the ramp leading up to them to the other side, likely either an emergency or crew exit.

Speaking of the railroad, we also saw workers attending to the section outside Tomorrowland Light & Power Co.

Not much was going around the rear of the building.

The back still looks unfinished, though the pattern in the concrete walls does have a very industrial look.

One worker was preparing the dirt for concrete to be poured around the front half of the building.

The last time we visited, the doors were open, though we couldn’t see much inside. Currently, they were closed once again.

The very bottom of the front remains unfinished.

The shop closed for the extensive refurbishment in early August. No timetable has been announced for its reopening, but it’s very likely that will happen when TRON Lightcycle / Run opens next year.

Heading back today, the center planter just before the bridge was covered with silver wrap.

The same treatment was given to the barrier furthest to the right.

Little changed on the train tracks. While testing of the trains has been going for several months, no reopening date has been announced.

Looking towards the locker area, we can just make out signage for restrooms. These will likely provide much-needed relief when waits get long for the ride.

Little has changed at the entrance, while the Lightcycle banners remain up. They look very much like the ones that hang in front of its sister attraction, TRON Lightcycle Power Run, in Shanghai Disneyland.

Right now, black protective sheathing covers the rear entrance. A white covering with a large slit up the middle marks the doorway.

The shop will serve as the gift shop for both TRON Lightcycle / Run and Space Mountain, so the refurbishment is aimed at unifying the look with the new building.

Above, concept art shows the store with a light blue roof accented with white concrete. It’s unclear how accurate this is to the current vision, as the decorative towers have already been removed. Meanwhile, Cast Members are already learning they’ll be assigned to the new ride ahead of its Spring 2023 opening.

If you’d like a sneak peek at how the ride itself will look, check out our POV video of Shanghai Disneyland’s TRON Lightcycle Power Run!