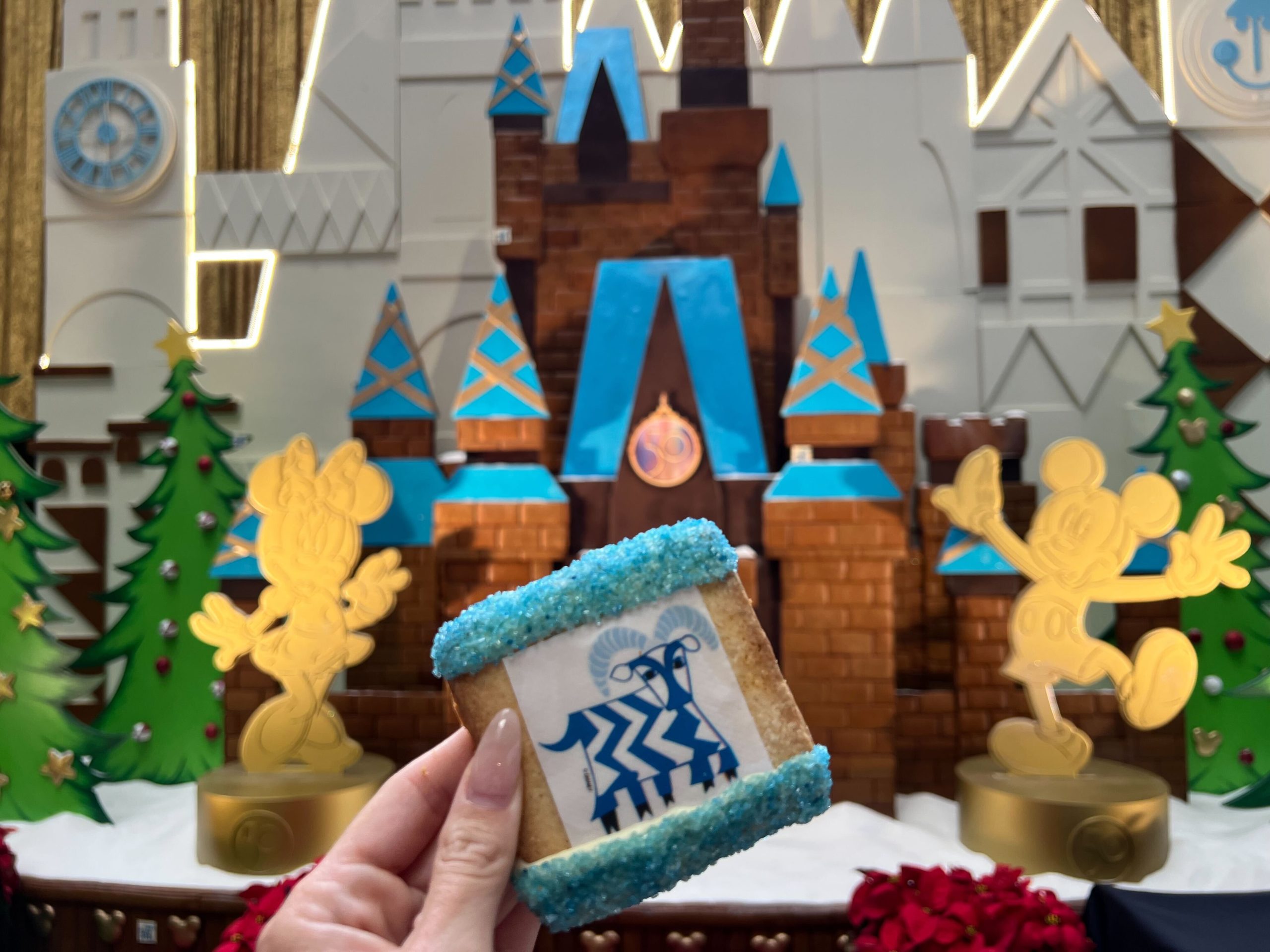 In celebration of Mary Blair’s influence on Disney’s Contemporary Resort, this year’s gingerbread castle is themed to “it’s a small world” with hidden five legged goats. They’re also selling a five legged goat cookie, which we had to get.

The goat is in reference to the five legged goat seen on the Grand Canyon Concourse mural on the 4th floor of Disney’s Contemporary Resort. The mural was created by legendary Imagineer Mary Blair, who was also responsible for the iconic aesthetics of “it’s a small world.”

A sign gives the story of the Five Legged Goat. It reads, “Mary Blair was an American artist, animator, and designer, who worked with Walt Disney, drawing concept art for such films as ‘Alice in Wonderland,’ ‘Cinderella,’ and ‘Peter Pan.’ Mary Blair also created the designs and art for “it’s a small world” as well as the art throughout the Contemporary and the Grand Canyon Concourse Mural, behind you.

In 1970, Mary Blair was asked to design a series of murals for the development of the Contemporary.

The striking mural she created is 90 feet tall and is made with 18,000 hand painted tiles that are lovingly fire glazed. Mary Blair’s color choice and magnificent forms illuminate post war optimism and tie the hotel to Tomorrowland — as this was an era of ‘believing in an optimistic future.’

The theme that she wanted to import was that ‘nothing made by man could ever be perfect.’

Therefore she created one Five Legged Goat, which the mural is now known for, its one hidden ‘five-legged goat’.”

As adorable as it is, this still just tastes like your classic sugar cookie. It’s slightly powdery but nice and sweet and crumbly.

The goat is not edible paper but like a confectionery sugar. It’s very bland and adds nothing to the flavor profile.

The sprinkles give it an extra crunch and sweetness. It’s a cute cookie, and they did try to make it pretty photogenic. It is very basic, though, and there are other desserts that you may want to try.

Many of the 50th anniversary offerings at Disney’s Contemporary Resort have included homages to Blair. The resort also underwent an extensive refurbishment in which more of Blair’s art and design ideas were added to the lobby (including another goat!). The five legged goat has become a fan-favorite of many guests.

For more holiday treats around Walt Disney World, check out the following:

Florida Residents Can Save Up To 20% on Walt Disney World Resort Hotels in 2023October 26, 2022
Fight Over Magic Kingdom Fireworks Spot Leads to Hospitalization of Woman with "Bleeding on Her Brai...June 16, 2022
EPCOT Experience Now Permanently Closed, Odyssey Pavilion Blocked OffMarch 14, 2022