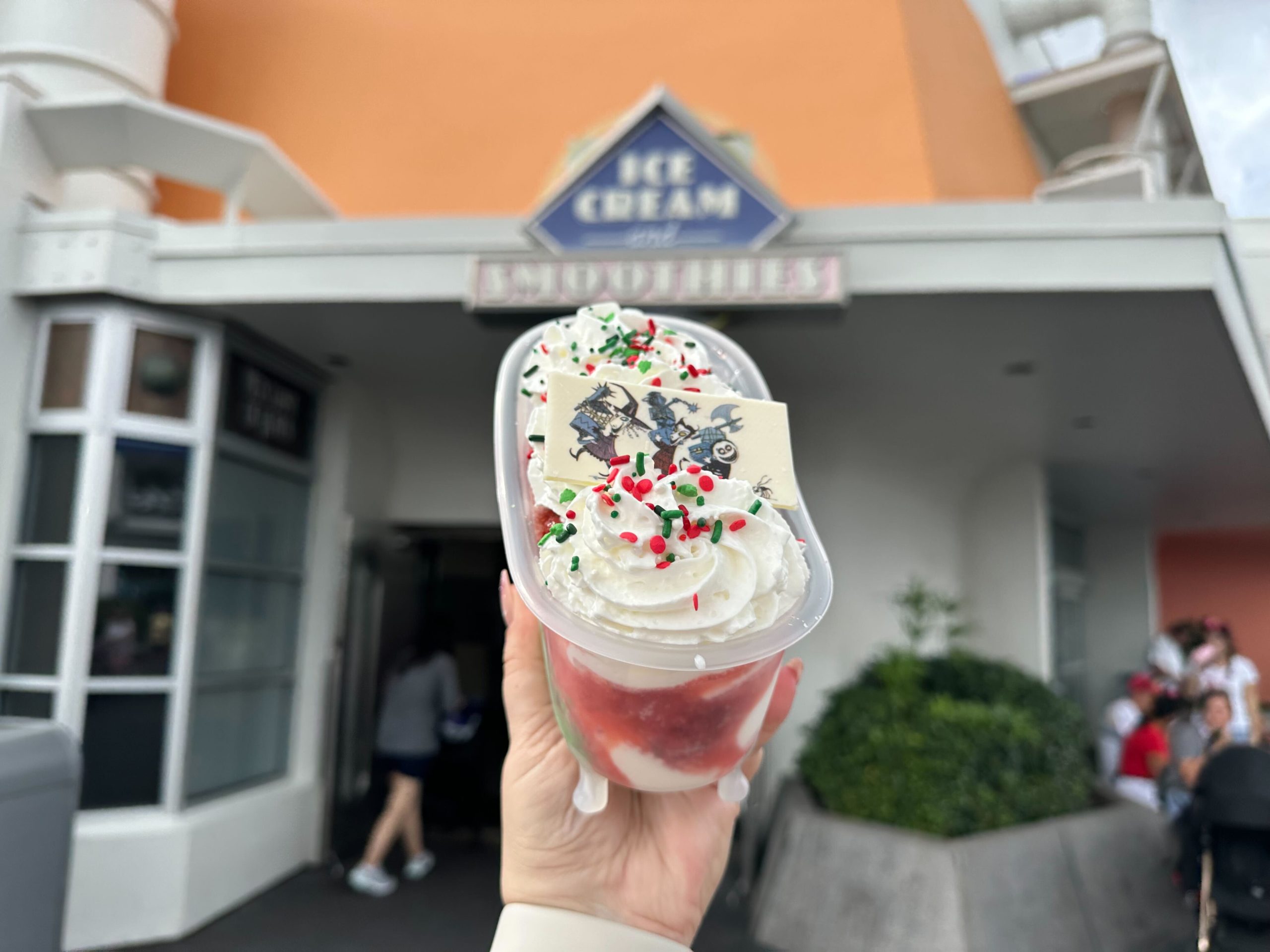 To celebrate the season at Magic Kingdom, Auntie Gravity’s Galactic Goodies is serving a “Nightmare Before Christmas” Lock, Shock, and Barrel sundae. Like the 50th anniversary Uncle Orville treat, this sundae is served in a bathtub.

The Lock, Shock, and Barrel Sundae at Auntie Gravity’s Galactic Goodies is Christmas in a bathtub! Yes, it’s pricey for a snack at $17.99, but you get to keep the bathtub!

The tub is filled with a light, fluffy, and green vanilla cake topped with vanilla soft serve, strawberry topping, and whipped cream.

Sprinkled across the fluffy whipped cream are red, green, and Mickey-shaped holiday sprinkles. The white chocolate square features Lock, Shock, and Barrel themselves. The mischievous “Nightmare Before Christmas” trio is carrying gadgets galore atop this sundae.

We found this to be quite the shareable treat due to its size and price point. It’s certainly photogenic, too. But how does it taste? The Lock, Shock, and Barrel Sundae is a decent dessert, but it’s nothing special. It’s an ice cream sundae with cake.

The cake itself was fluffy and moist with a light vanilla flavor. The vanilla soft serve blended well with the cake and the strawberry topping and was actually quite refreshing. There was an ample amount of whipped cream and Christmas sprinkles scattered along the top of the sundae, which made it very festive and cheery.

The disappointment here was actually the Lock, Shock, and Barrel white chocolate square. It was tasteless. Well, almost tasteless. It had a taste much akin to cardboard, like most white chocolate decorations at Walt Disney World.

The Lock, Shock, and Barrel Sundae was acceptable. Kids will likely share this and be delighted. It’s ice cream, so that’s a win. Is it the most “Christmas-y” snack you’ll find in Walt Disney World? Not by a long shot. But it’s cute, light, and you get to keep the bathtub.

The Lock, Shock, and Barrel sundae is available during regular park hours and during Mickey’s Very Merry Christmas Party from November 8 through December 31.

REVIEW: Impossible Meatloaf, Pumpkin Cheesecake, and More From Grandma’s Recipes Marketplace at the 2022 Festival of Holidays in Disney California Adventure