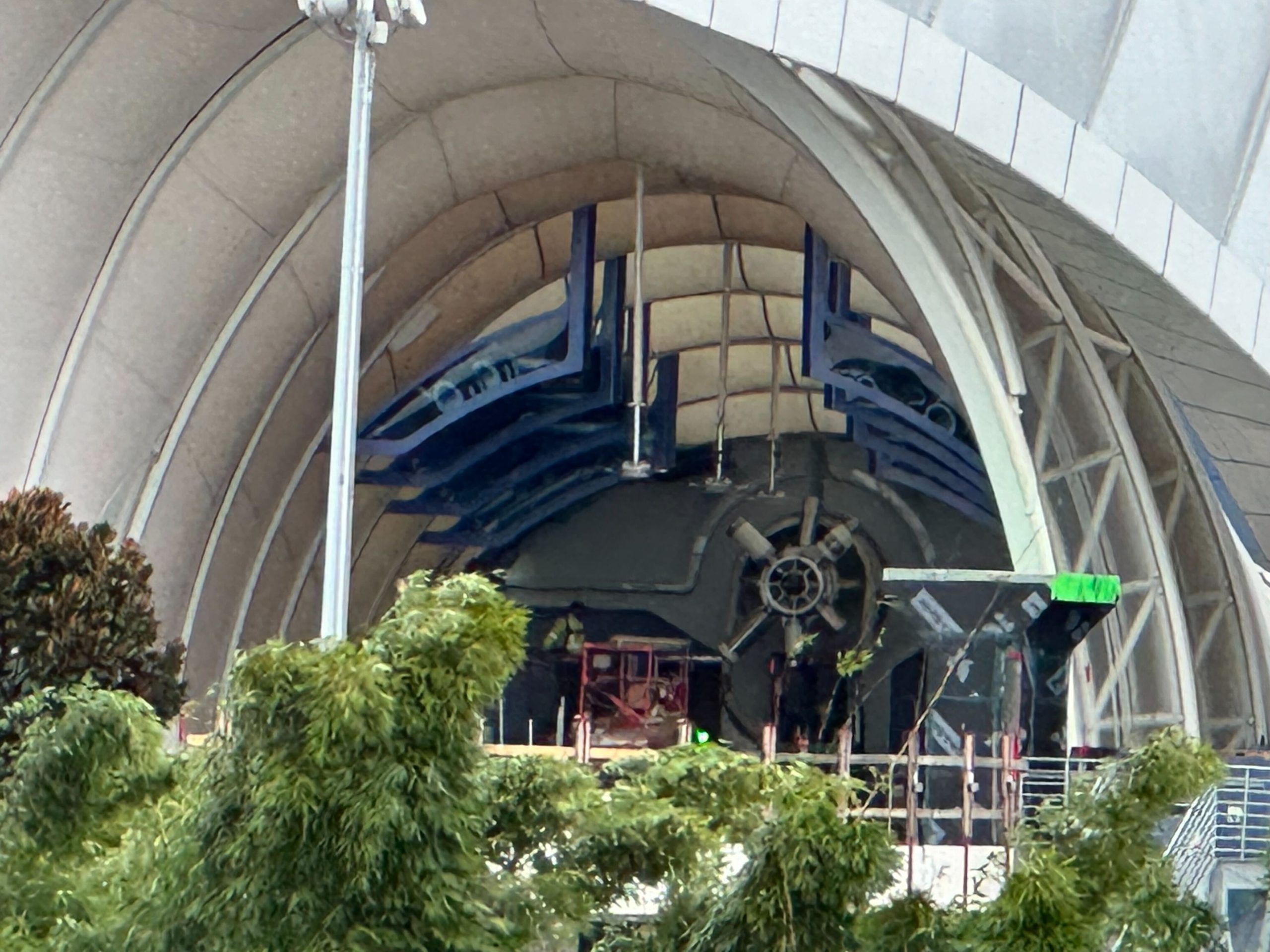 Before Hurricane Nicole hit Florida, we took a ride on the Tomorrowland Transit Authority PeopleMover in Magic Kingdom to see progress on the construction of TRON Lightcycle / Run.

While the weather worsened ahead of the hurricane, very few crew members were on site.

We saw a few on the elevated walkway preparing to leave.

The curved poles in the courtyard area are lampposts.

Railings have also been installed along the lower walkway, which will lead to Storybook Circus.

As we noted last month, many trees have been planted around the attraction recently.

Most of the courtyard has been paved, but there are still sections of dirt showing through.

Construction equipment was tied down and covered in tarps in preparation for the storm.

This row of trees partially blocks the Walt Disney World Railroad tunnel and tracks from view.

A month ago, signs were installed above the attraction’s main entrance.

A new wheel-like element has been added to the wall of the building.

Three poles for ceiling fans also hang in a row between the blue signs.

A line going around the new silver wheel is the blue light seen in Shanghai Disneyland.

The archway to the side will presumably be a backstage entrance. Right now, it does not yet have a final layer of paneling, with black and green sheathing still exposed.

Permanent railings have yet to be installed on the stretch of walkway leading to the entrance.

Further along in our ride, we got a look at Tomorrowland Light & Power Co., the Space Mountain gift shop that is being refurbished in anticipation of TRON Lightcycle / Run.

Crews have been working on the pavement at this end of the building.

Guests haven’t needed to walk on this sidewalk for years now. It previously led to Storybook Circus, but will now lead directly to TRON Lightcycle / Run.

The slight overhang of the building has been rebuilt after elements were removed to open up the walkway.

The gift shop is also currently closed as the interior is refurbished.

Black sheathing is still exposed on the top of the overhang, as well as between some of the doors.

The building is also in need of a fresh paint job once construction is complete.

Gear elements, some of the last remnants of Tomorrowland 1994, were removed from the front of the building.

Over in Storybook Circus, we took another look at the coaster.

This small building will likely be for lockers and restrooms.

TRON Lightcycle / Run is scheduled to (finally) open in spring 2023.