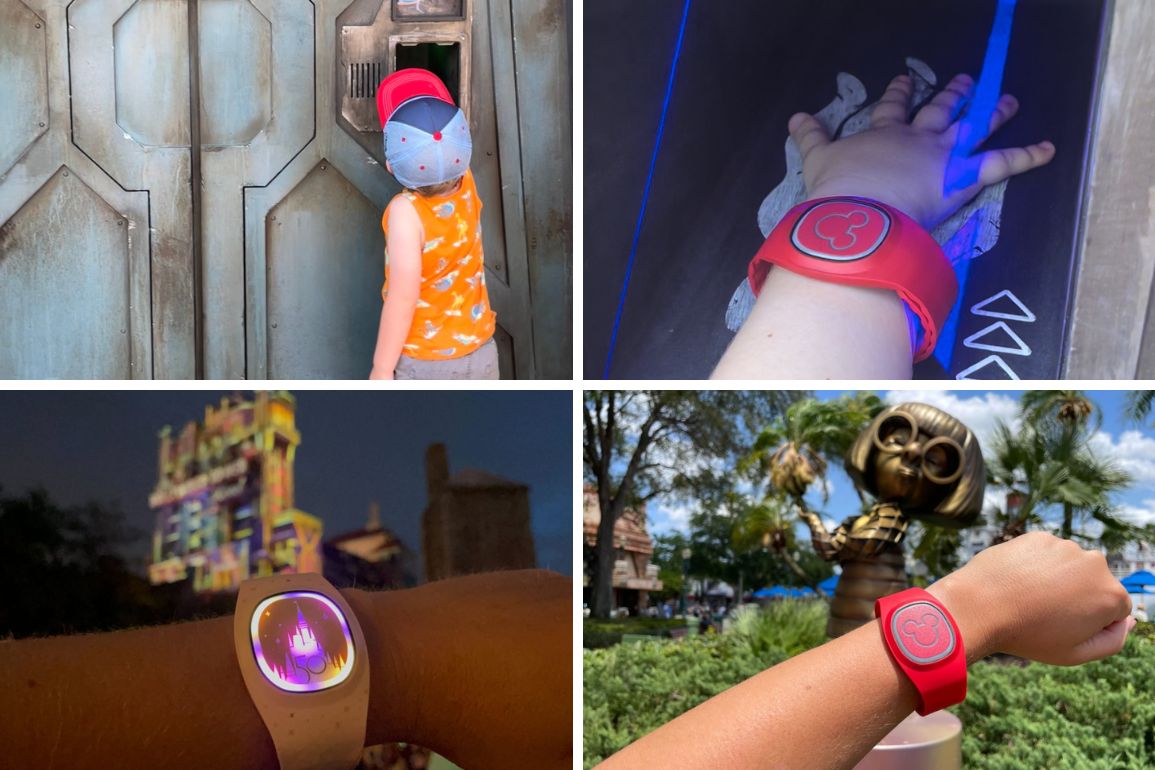 I’m going to preface this by stating, you do not need to have the Play Disney app to play Star Wars: Batuu Bounty Hunters, or interact with Fab 50 Statues. Every child and/or guest is going to have a different experience, and these are my own opinions based off my family’s experience.

When MagicBand+ launched, I was excited to bring my son(4) to interact with the Fab 50 Statues, and play Star Wars: Batuu Bounty Hunters. Our first stop was to let him pick out his new MagicBand+, and link it our account. We did not have any issues with battery life or linking to our My Disney Experience account.

Next stop, Star Wars: Galaxy’s Edge to become bounty hunters. I had the Play Disney app up and ready for him to use. By using the Play Disney app during the game, it becomes a more interactive experience but, you can play without the app. You can use the app to help you find bounties, and see those bounties hidden behind doors. Unfortunately, when starting our hunt we found out that to use his own MagicBand+, he needs his own Play Disney account. We dove deeper to try and figure out a solution for him to play on my phone with his band. We spoke to cast members, who seemed to think we could add a child’s profile under mine on the Play Disney app, which you can for other games on the app like Andy’s Boardgame Blast!. Star Wars: Batuu Bounty Hunters is a one player game, therefore; we cannot add his own profile, on my account, to this specific game.

We tried making him is own account on Play Disney. That prompted us to connect a MagicBand+, that brought us to My Disney Experience where it says “no MagicBand+ found” because his MagicBand+ is already linked under my account. All this mislinking means my 4 year old would need his own My Disney Experience account, essentially his own email account to use for the My Disney Experience account, to link to his band and Play Disney app. Seems absurb to not have the ability to make a childs profile or add more guests, with their own bands, to this one game. Normally, one family member is the holder of the account and adds different profiles for the other members of their family. Now, the “childs profile” on Star Wars: Batuu Bounty Hunters might be coming soon but, we have not seen it updated yet.

Instead of using his new MagicBand+ that we just purchased for almost $40, that includes our Annual Passholder discount, he had to use mine if he wanted to use the Play Disney app. So, that’s what we did. He had a blast playing, and searching for bounties.

As we were playing and walking around, we were stopped by numerous other families that we were having the same issues as we did. Their children all had their own bands on and were playing, but not able to use the phone to see the bounty hidden behind doors. Parents seemed frustrated that their children were missing part of the game by not following along on the Play Disney app as well. In my opinion, skip the Play Disney App part of this game. You don’t need it and it ended up being a hassle. My son had the same amount of “fun” being a Bounty Hunter without it.

Our next stop was the Fab 50 Characters statues. When you get into range of a statue, your MagicBand+ will vibrate, prompting you to step closer and wave. When we first tried, he was having a hard time waving hard enough to activate an interaction. I went on our My Disney Experience App, to “MagicBands and More,” selected his MagicBand+, clicked “Settings,” and turned on “Increase Gesture Recognition.” This helped tremendously. If you have a younger child, do this while you’re linking your bands.

MagicBand+ also lights up and interacts during Beacons of Magic and nighttime entertainment. He didn’t even notice his band was vibrating and lighting up because he was watching fireworks going off in front of him. Honestly, I completely understand this and did the same thing.

Overall, I personally do not think this is a necessity for a trip to Walt Disney World for a young child. While we did have fun becoming Bounty Hunters and waving at the statues, it’s an added cost that could go towards a character dining experience, or lighting lane purchases. That’s something to keep in mind. My son was getting a little frustrated at the fact that he could not use the app to play but, once we figured out that you do not need it to participate he seemed okay. He is only four and older children may understand the concept of Bounty Hunters better. Since the launch of MagicBand+, he uses his MagicBand+ for entry to the theme parks and entry to the attractions. We played Star Wars: Batuu Bounty Hunters two times since it’s debut, and the second time he did not use the Play Disney App because he chose to use his own MagicBand+.