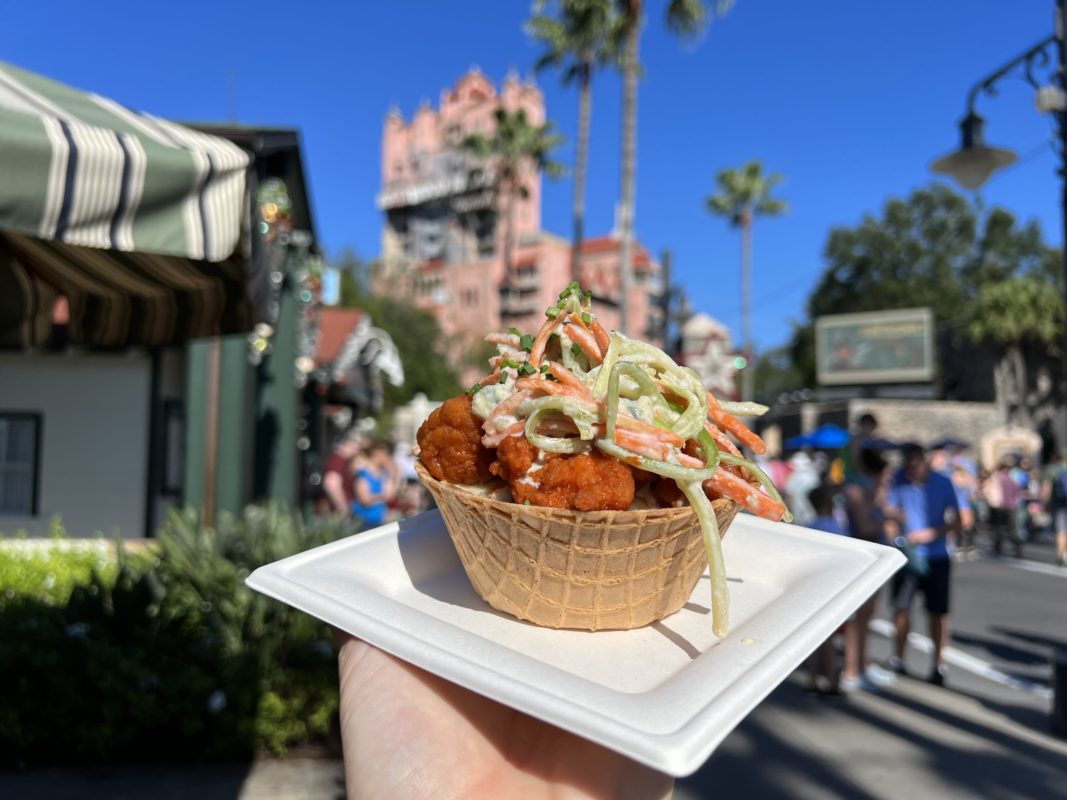 Good morning from Disney’s Hollywood Studios! We’re talking a walk around the park and trying some new food today so we hope you’re hungry!

A new press-on light keychain by Ashley Eckstein is available at Crossroads of the World right when you enter the park. The keychain is $14.99 and part of the Star Wars “Guided by the Light” collection.

There is also a fun blue limited edition of 4,000 Stitch Aloha Kalikimaka surfing pin for $17.99, limited release Scrooge McDuck pin for $19.99, and Guardians of the Galaxy Holiday Special logo pin for $17.99.

There are also these very cute talking Toy Story Living Magic Sketchbook ornaments along the back wall. Bullseye, Jessie, and Woody are in their toy boxes and say fun phrases for $22.99 each. Bullseye makes “clippity-clop” horseshoe noises.

There’s a new Star Wars Holiday 4-pack puzzle set for $34.99 at Mickey’s of Hollywood. Each puzzle is 500 pieces and features different characters such as C-3PO, R2-D2, and Ewoks in holiday settings.

There is now an adult version of the fuzzy pink embroidered floral Walt Disney World Spirit Jersey we found previously. The material is soft with embroidery along the sleeves and a light puffy letter logo along the back of the pullover for $89.99.

This adorable puffy-cheek Meeko is very busy eating biscuits on this grey water bottle for $27.99.

“Woof” and “purrr” read all across this coral-pink metal water bottle featuring some of our favorite Disney pets including Oliver, Little Brother, Meeko, Gus, and more for $34.99. This water bottle holds 34 ounces so it is much larger that the usual bottles we see.

This very cute button-up rolling wooden utensil holder has more of our furry friends on the wrap and silverware. Our favorite is Meeko on the serving fork that reads “Crunch, crunch.” The set is $19.99.

The last part of this dog-gone cute collection we found is this large ice chest tote for $44.99. More furry friends are running along the pattern all around the bag which also comes with a removable strap. The entire collection can be found at Mickey’s of Hollywood.

This adorable holiday Disney Parks Jewelry Pixar set has Sulley, Eve, and Woody to name a few on charms. The earrings are $24.99.

A large circle of pavement has been filled near the front of the PhotoPass studio near the entrance to the park.

We found this quilted Captain America belt bag at Keystone Clothiers for $29.99.

The Star Wars section of Keystone Clothiers has a grey plaid flannel button up for kids that is rather stylish. The front has some fancy pockets and the back has a small hood with a Mandalorian comic strip. The button-up is $49.99.

As we were passing by MuppetVision 3D for our daily dose of Muppets, we noticed a new gelato cart set up just outside of the theatre with many new flavors, including pumpkin spice.

We passed by Roundup Rodeo BBQ, where the facade of the building is covered in white but we couldn’t see much else happening since our last visit.

All that walking has us hungry! We tried all four new waffle bowls at Fairfax Faire, but were they as delicious as they looked? Find out here!
That’s all for us from Disney’s Hollywood Studios, thanks for following along!