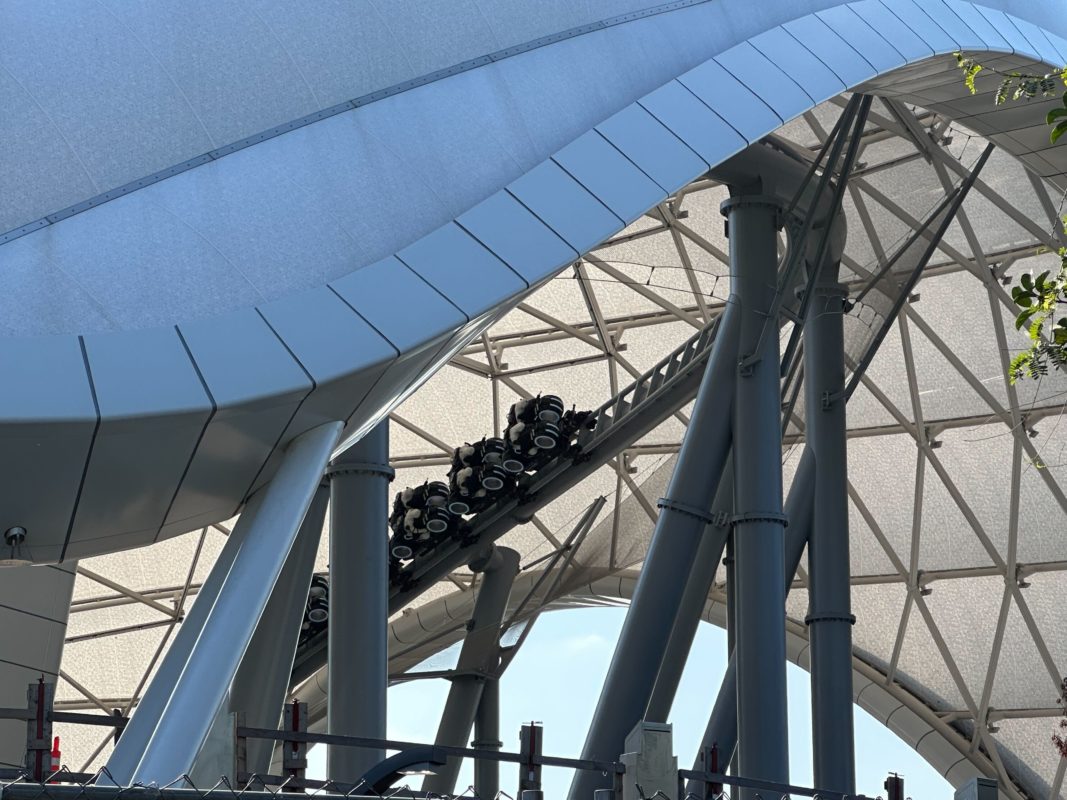 Last month we updated you on the progress of the upcoming TRON Lightcycle / Run roller coaster, showing the new entranceway lighting. Today when we stopped by we noticed that the train was running with test dummies on board, and that progress has been made to the walkways.

If you look closely, you can spot the test dummies in the ride vehicles as the attraction is tested.

Not every ride vehicle had test dummies on board.

Construction workers continue work near the entrance to the lockers building. The elevated walkway now has a permanent railing, where previously there was a temporary one made of wood.

The signs hanging from the entrance tunnel were added earlier this year, while the semi-circle and suspended machinery were installed recently. The machine and design over the doorways represent the device digitalizing you and sending you into The Grid.

The Grid is the digital world where TRON takes place. The premise of the ride takes guests aboard Lightcycles, the iconic vehicles from the films. Disney’s description of the attraction reads, “Lean forward into the ultimate race of survival! Leave the real world behind and join Team Blue in an epic quest across the Grid—the dark, computerized world with no horizons from TRON. Here, there’s no limit to the excitement.

Climb aboard your very own Lightcycle and take off on a high-speed adventure, racing against the Grid’s most menacing Programs. Surge past your fierce opponents as you attempt to cross through 8 Energy Gates and secure your team’s victory—so you can survive to race another day.”

The walkways leading up to the entrance of the attraction continue to see more pavement poured, and since our last update there are also more curved, futuristic light posts added around the area.

Work looks nearly complete near the tunnel for the Walt Disney World Railroad. We were able to see the train finally use these tracks and tunnel last month.

Work continues on the exterior of Tomorrowland Light & Power Co., which will operate as both the Space Mountain and TRON Lightcycle / Run gift shop.

While some weather-proof sheathing is still exposed, the exterior has been mostly cleaned up since the decorative towers were removed.

Guests will walk past the shop to reach TRON Lightcycle / Run, so the sidewalk has been opened up.

Are you getting excited for TRON Lightcycle / Run to finally open in spring 2023? Let us know in the comments.