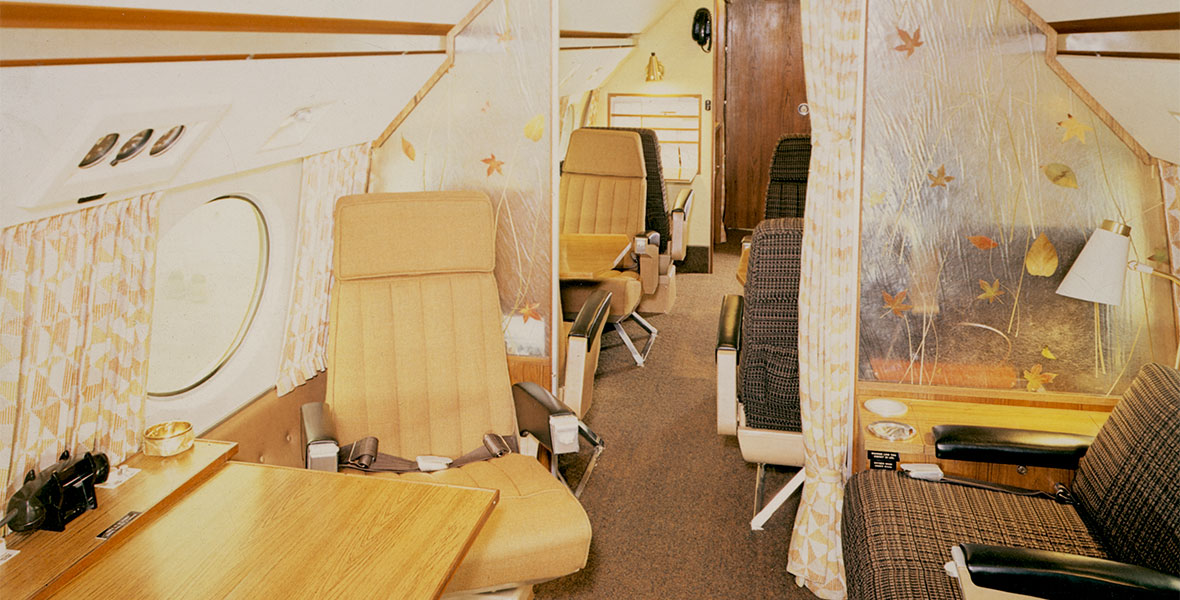 This past September, Disney unveiled Walt Disney’s fully restored Grumman Gulfstream I airplane at the 2022 D23 Expo. After the expo closed, the plane went to its new home at the Palm Springs Air Museum. Yesterday, on Walt’s 121st birthday, it was announced that the interior of the plane would be restored to how it looked when Walt flew in it. The restoration and recreation are expected to take approximately two years.

In conjunction with the announcement, an exhibit opened yesterday at the Palm Springs Air Museum with rarely seen items from the interior of the aircraft — also known affectionately as “The Mouse.” Items include a customized instrument panel originally located near Walt’s favorite onboard seat that allowed him to monitor flight conditions; a telephone handset that gave Walt a direct line of communication to the pilot in the cockpit; a flight bag featuring an image of Mickey Mouse sitting on the tail of the iconic plane; and more. These items are on long-term loan from the Walt Disney Archives to the museum.

“We are so thrilled to partner with the Walt Disney Archives on this amazing restoration project,” said Museum Vice Chairman Fred Bell. “The Palm Springs Air Museum has restored over 60 aircraft in its 26-year history. Phoenix Air Group, out of Cartersville, Georgia, has offered to donate any parts we need. Phoenix Air Group is a worldwide provider of aviation services, and at one point, owned and operated 20% of the world fleet of Gulfstream I’s flying at the time. We know that we have a special responsibility to Walt Disney, to the Archives, and to the millions of Disney fans around the world to do this work as accurately as possible so that the airplane can be enjoyed for decades to come.”

The Walt Disney Archives worked with Amazon, to restore Walt’s Grumman Gulfstream I company airplane and have it transported to Anaheim.

Walt Disney’s Grumman Gulfstream I plane journeyed from D23 Expo 2022 in Anaheim, California, to Palm Springs, California, in September. The aircraft, which is on a long-term loan from the Archives, is now displayed alongside the Palm Springs Air Museum collection. This new exhibit highlights the history of the plane, showcasing its significance to The Walt Disney Company’s history and its relevance to the Palm Springs area.

In 1963, Walt acquired the iconic Gulfstream. The interior of the plane, initially designed with creative input from Walt and his wife, Lillian, seated up to 15 passengers and included a galley kitchen, two restrooms, two couches, a desk, and nods to the mouse who started it all, including matchbooks and stationery adorned with a silhouette of Mickey Mouse. Mickey’s initials were eventually included in the tail number of the plane, too, as N234MM, in 1967. Throughout its 28 years of service to The Walt Disney Company, the plane flew 20,000 hours and transported an estimated 83,000 passengers before it was decommissioned.

When they visit the Palm Springs Air Museum, guests will have the opportunity to learn about the role this iconic plane has played throughout the company’s history, such as:

The Palm Springs Air Museum is a living history museum that contains more than 75 vintage airframes, including those from the Wright Brothers at Kitty Hawk. The museum is also home to airframes from across the spectrum of military aviation: World War II, the Korean War, the Vietnam War, and the F-117 Stealth Fighter. The planes are housed inside 91,000 square feet of open hangars and on the tarmac at a 10-acre facility. To learn more, visit PalmSpringsAirMuseum.org.

Will you be heading out to Palm Springs to check out Walt’s plane and new exhibit? Let us know in the comments below.