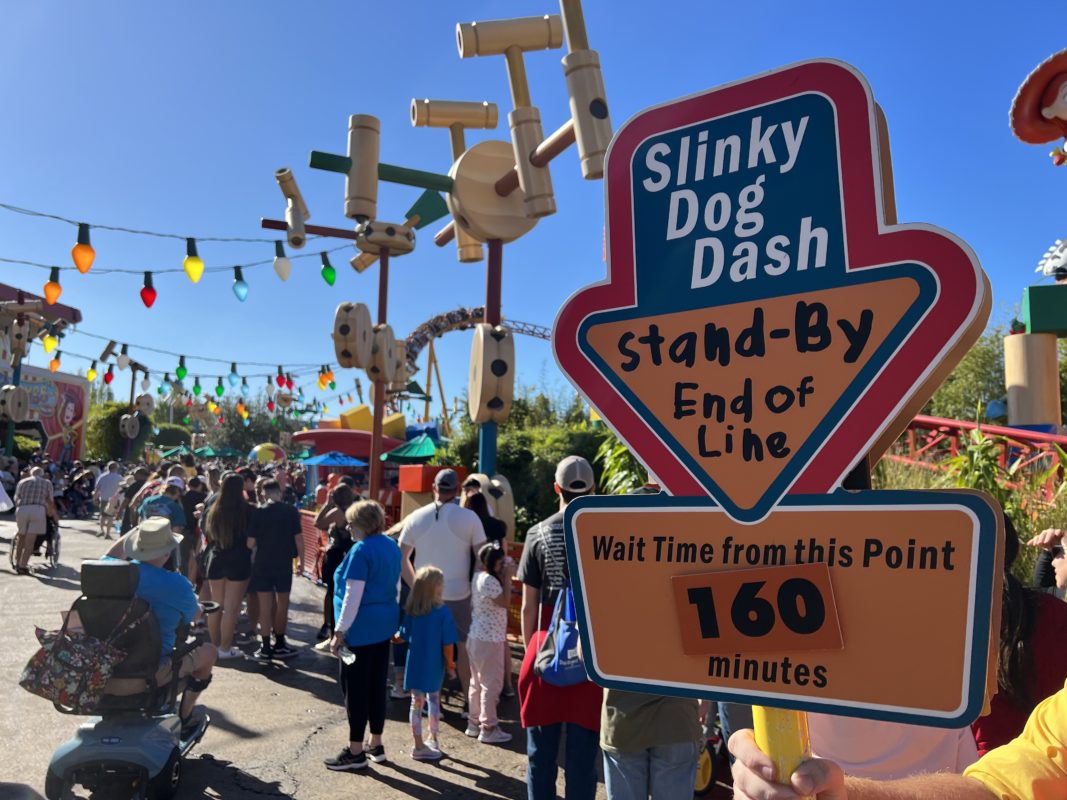 Good morning from Disney’s Hollywood Studios! It’s a cool and breezy morning here, so let’s go on a walk around the park to see what’s new!

As we walked up to the tap points to enter the park, we noticed the usual large crowds waiting as well.

Hollywood Boulevard was packed with guests early on, making their way to the next attraction. Getting across the street to the shops was a battle, but we made it!

At our first stop at The Darkroom, we found a colorful new Disney Skyliner Pin. Look at how cute Mickey and Minnie are in their own car!

MARVEL fans will love this Infinity Stone Gauntlet digital watch cover for $19.99 also at The Darkroom. It is a stretchy rubber casing with each of the stones around the watch border.

Festive (and a little late) new Chip ‘n’ Dale, Minnie Mouse, and Goofy ornaments can be found along the ornament wall at the back of Celebrity 5&10. Each ornament features the character’s face on one side and name on the other. Each ornament is $23.99.

A sprinkle of gold glitter surrounds the face while pixie dust sparkles on the ears of the ornaments.

In the Vault Collection portion of the store, we found a few new 100 Years of Wonder merchandise items, including this rather silver Mickey Mouse figurine.

These new Star Wars mystery Grogu plush boxes are so adorable! You can get one of six Grogus participating in various mischievous activities like playing with his food, meditating, and eating. This plush is $14.99 at Keystone Clothiers.

Do you “heart” Star Wars? You will after seeing the newest Spirit Jersey!

We made our way down Sunset Boulevard to Mouse About Town, where there is a new Chip ‘n’ Dale “Better together” floral waffle thermal shirt for $39.99. Those two are always getting into trouble.

The views on Sunset today were unmatched! We made our way down to take a ride on Tower of Terror before realizing the wait time was 120 minutes shortly after park open. We opted for the coffee line instead.

Rock Around the Shop has two new 2023 items — a magnet and acrylic ornament featuring the main mouse himself walking around the four theme parks. The magnet is $14.99, and the ornament is $19.99.

As we headed back down Sunset towards Hollywood Boulevard, we stopped at Reel Vogue for these cute “Cars” shirts. There is a short-sleeved “Dino Park” orange and teal youth shirt for $19.99.

“TRex Terror” reads on this green and beige long-sleeve top for youths. On the front of the shirt, you can see a prehistoric-looking Lightning McQueen and Tow Mater running for their lives from a towering t-rex. A dino and palm trees can be seen on the sleeves. The shirt is $34.99.

Frozen Fractal Gifts has an Anna headband set. There are three headbands in the set that match her color story in “Frozen II.” It also goes along with a few of the new Frozen apparel by Brittney Lee we found at EPCOT. The headbands are $24.99.

Look at this guy! A large and smiley Wampa plush is the latest Cuddlez stuffed animal that you can find at Tatooine Traders. The Wampa is $39.99 and can be found in a large basket near the Create-Your-Own Lightsaber station.

The Resistance Carts in Star Wars: Galaxy’s Edge held more merchandise for us, including this awesome new X-Wing Fighter Pilot Jacket. There is also one for adults!

Jessie’s Trading Post has a “Howdy Partner!” vintage distressed shirt with Woody giving a friendly hat nod. The shirt is $19.99.

Long lines plagued the park early on, with many wait times topping over 100 minutes shortly after park open. The line for Slinky Dog Dash pushed to the edge of the park and was at 160 minutes before 10:30 a.m.

Not much change has been happening at Roundup Rodeo BBQ since our discovery of the large pencil. There appear to be two new metal posts installed on either side of the entrance sign, but it’s not clear what these are for just yet.

After escaping the masses at Disney’s Hollywood Studios, we took the Skyliner over to Disney’s Riviera Resort. DVC members can pick up this “Let the good times begin” Mickey Mouse youth shirt for $19.99 at La Boutique.

On the other side of the shop, we found a few more new resort-exclusive pieces. A hat, scarf, and this woven bag are among the newest additions to the resort’s merchandise collection.

We took a walk outside the resort and noticed some refurbishment announced for the Bocce Ball court area. The green turf is peeling and badly distressed, a common theme we’ve been noticing around Walt Disney World as of late.

That’s all for us today! Thanks for following along!