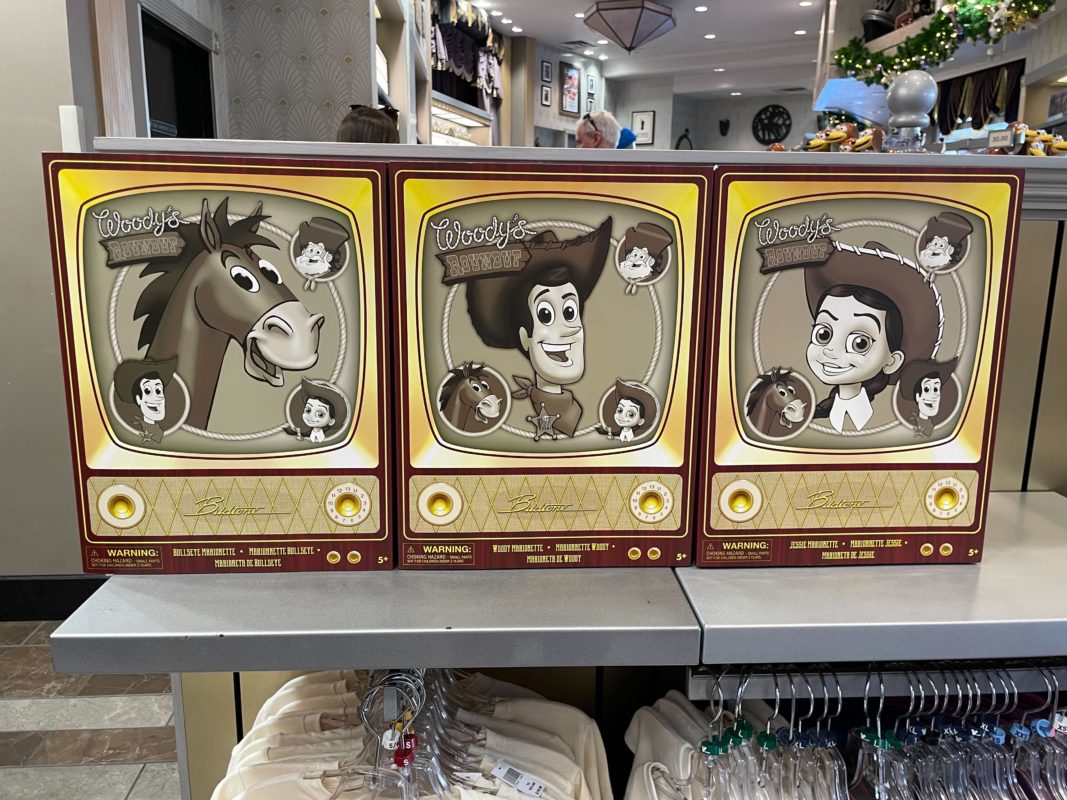 Fans of the “Toy Story” series might remember the origins of Woody and Jessie as characters on a classic 1950s-era show “Woody’s Roundup,” where they were played by marionettes. Now if you want to recreate those fun and kooky scenes, you can pick up a set of Woody, Jessie, and Bullseye marionettes at Walt Disney World! We found these at the Beverly Sunset Shop at Disney’s Hollywood Studios.

Bullseye stars in his own show here, kept in a TV-like box.

The marionette has strings attached to the four legs. The marionette itself is made of fabric and canvas, and is in black and white to keep in theme with the fictional TV show. In this scene, we see Bullseye sitting outside the town schoolhouse, which Woody and Bullseye built together in the final episode of “Woody’s Roundup.”

The back side of each box resembles a 1950s-era black-and-white TV, with a protruding black piece which holds the cathode-ray tube, and the vents next to it.

Just like Bullseye, Woody is housed in a faux 1950s TV-looking box. His face along with the other show characters are on the screen, which is in black and white. Fake channel and volume dials are below and the brand reads “Budtone.”

Inside the box, we see Woody.

He’s also made of canvas and fabric, with a plastic face and hands. Strings control his arms and legs.

His face is ever so slightly unsettling. Just like Bullseye, the puppet is rendered in black and white.

Two of the “Woody’s Roundup” critters are included in this box. Woody is set on a background of the sheriff’s office, of course.

Just like Woody and Bullseye, Jessie is housed in a faux TV set-looking box.

Like Woody, Jessie has marionette strings attached to her arms and legs. Her outfit is made of canvas and fabric with a plastic face and hands.

Her pants appear to be faux leather. Jessie also comes with two critters from the show, and is set on a background of a barn.

Will you pick up these Woody’s Roundup marionettes to recreate your own version of the fictional show? Let us know in the comments below! And if you’re a fan of the classic cowboy aesthetic, don’t miss the Woody’s Roundup-themed room at Disneyland Paris!