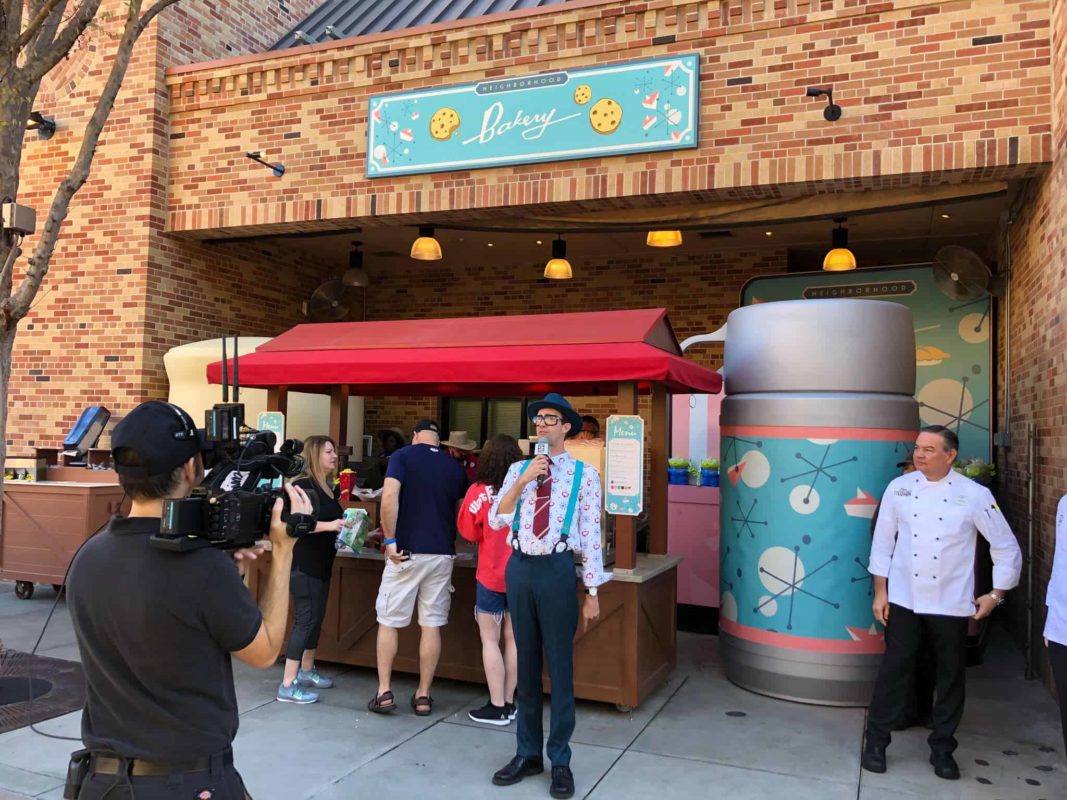 Starting today through September 30, 2019, you can experience the world of The Incredibles at Disney’s Hollywood Studios! Bask in the world of Supers at Pixar Place, which has been transformed into a Municiberg city block right out of Metroville! An Incredible Celebration hosts a number of neat activities just in time for Hollywood Studios’ 30th Anniversary. To go along with the theme, a booth named Neighborhood Bakery was created with a menu of specially-themed foods just for the event. 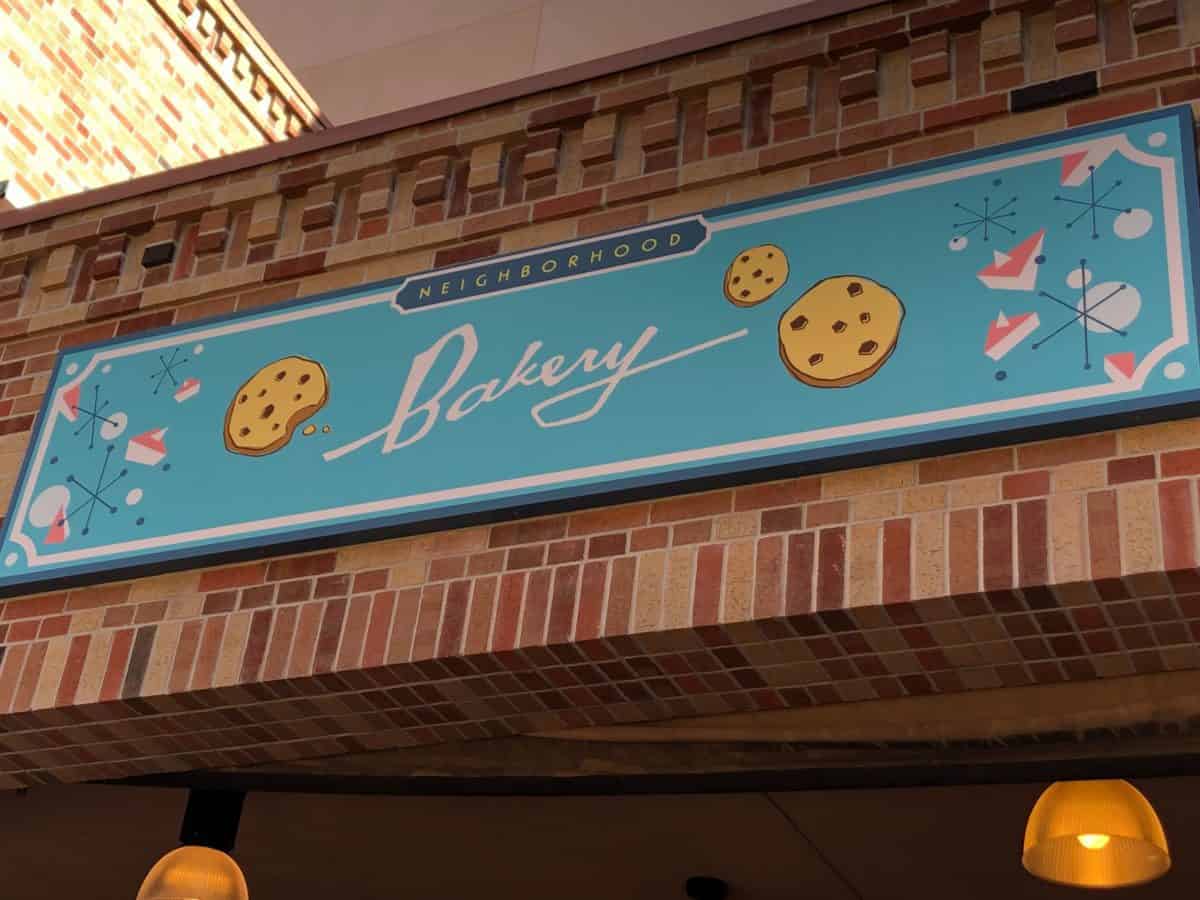 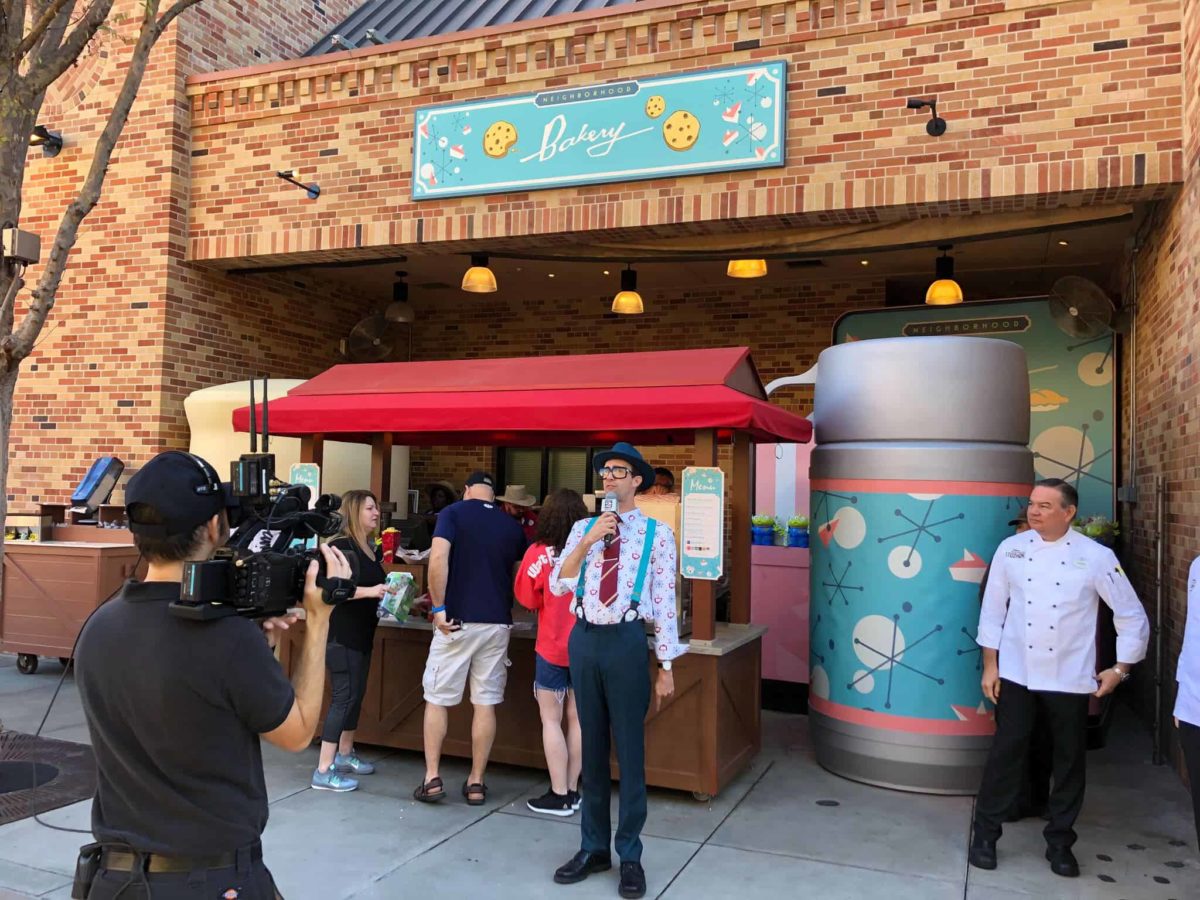 We were surprised to see a bit of Streetmosphere throughout Pixar Place. There was a host narrating various events and chatting with guests. 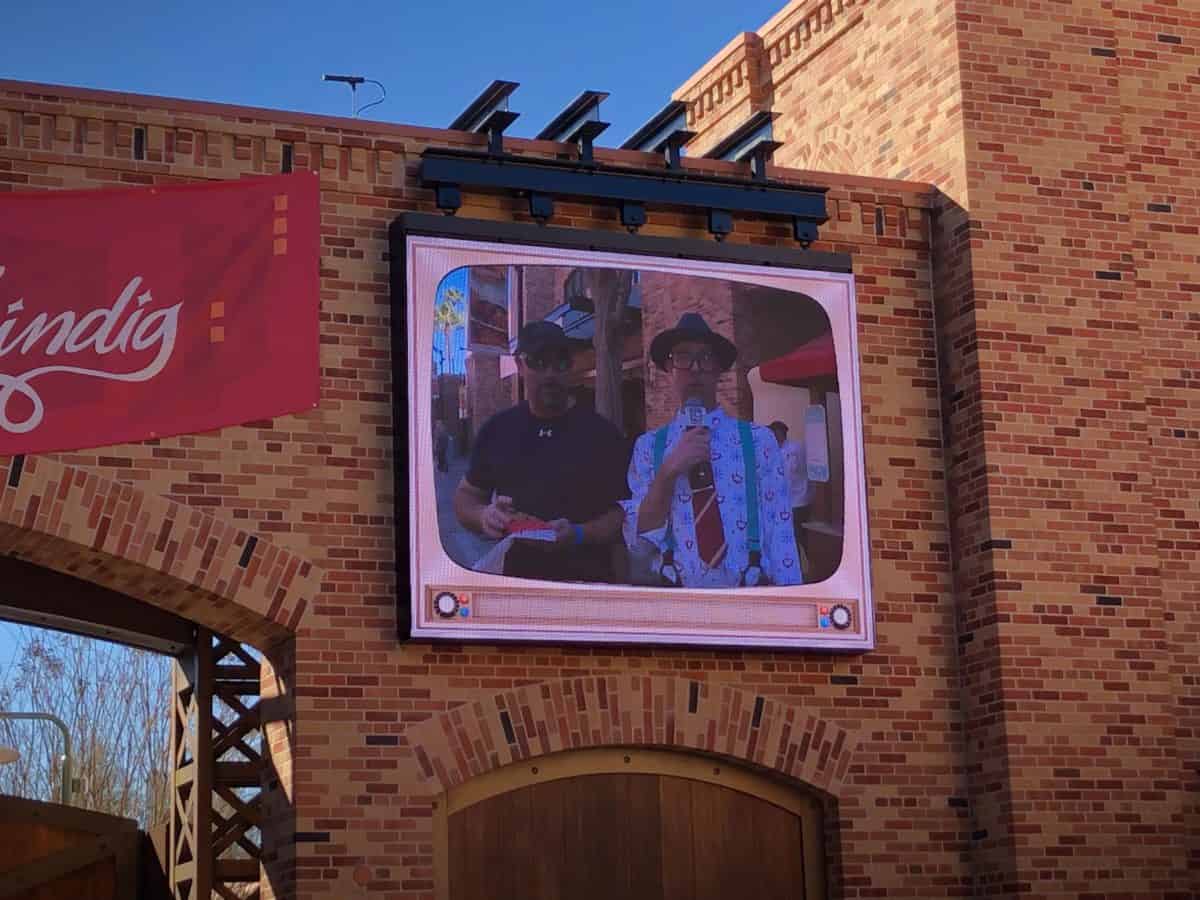 They live broadcast him on this old-timey TV screen projection on one of the walls. 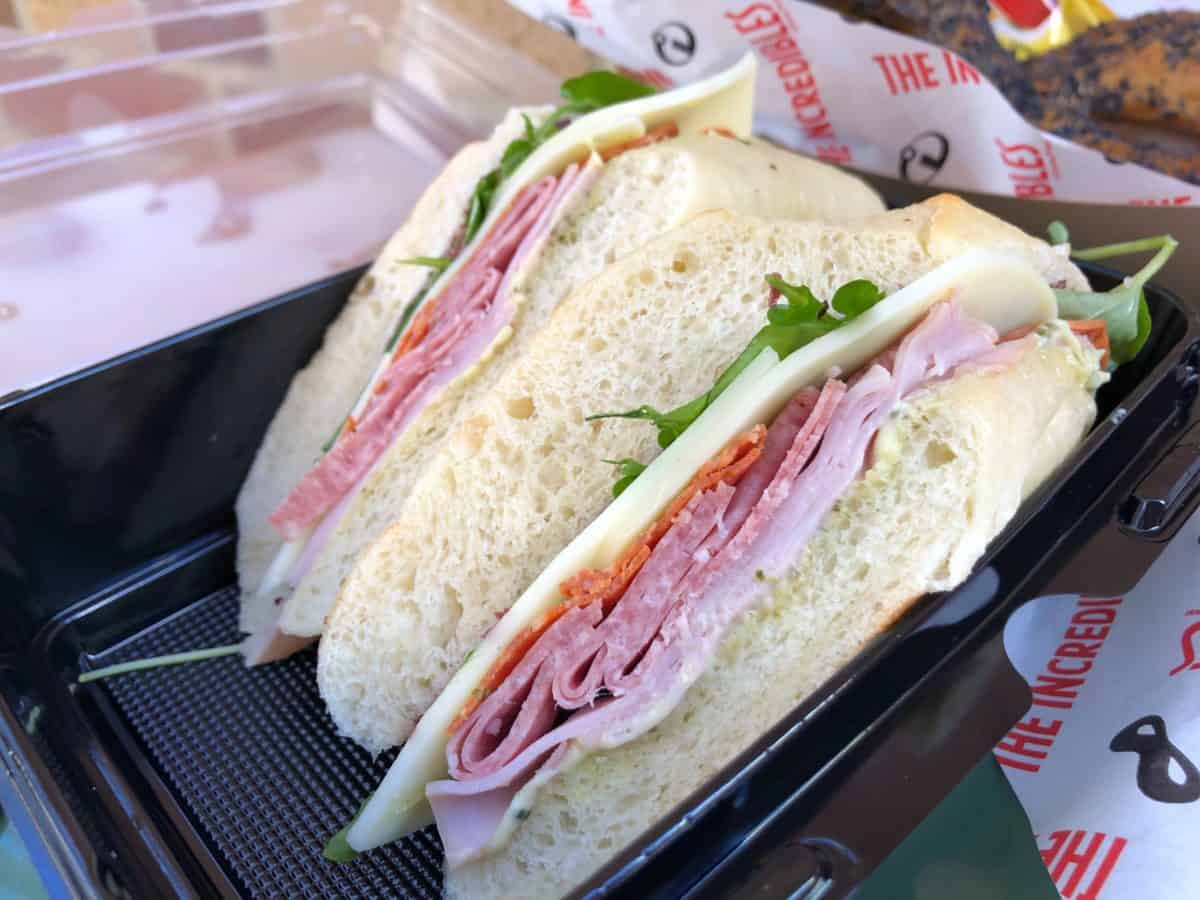 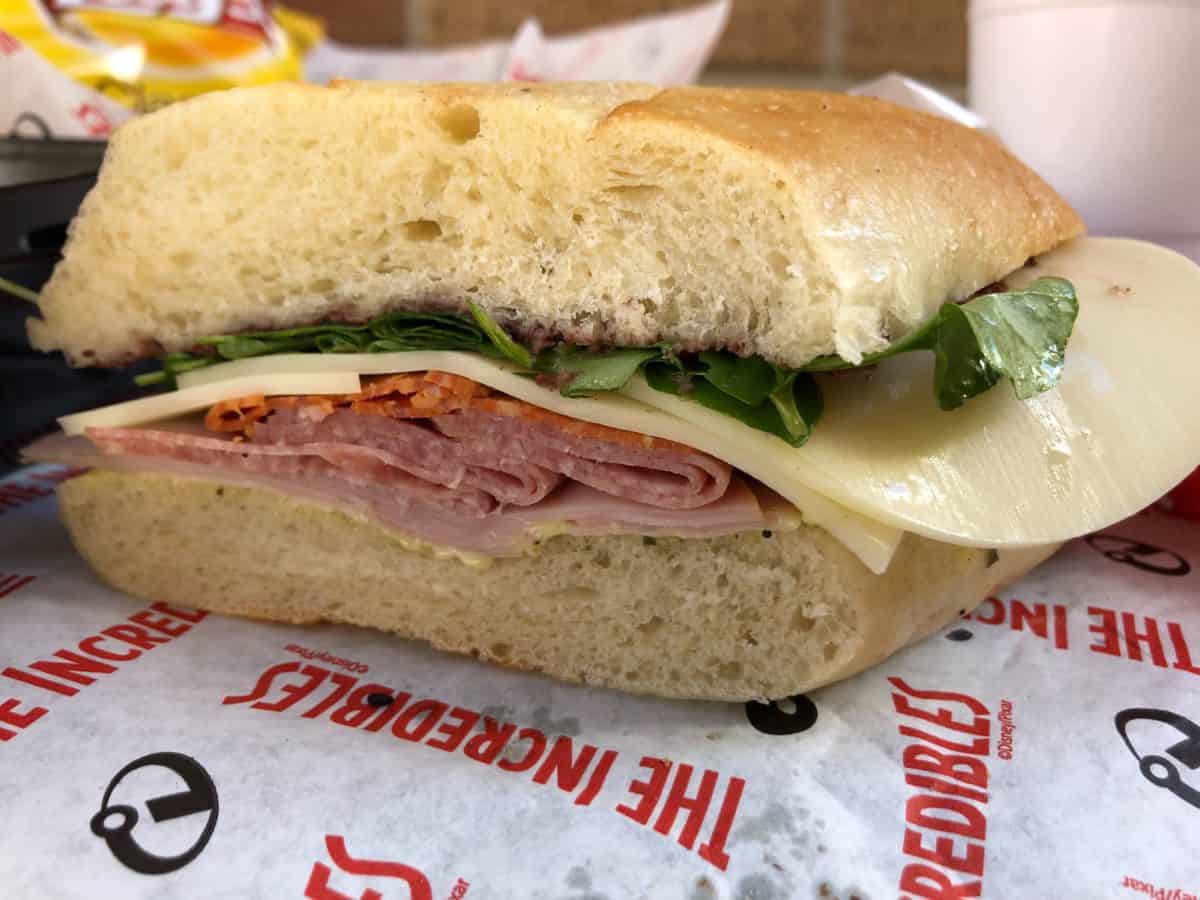 This sandwich was a standout. It’s served cold, but the Italian meats (pepperoni, salami, ham) and provolone cheese pair surprisingly well with the olive tapenade, greens, and hero bread. It’s one of the better cold sandwiches we’ve had in the parks to date. A bit on the pricey side, but you do get a bag of chips to round the meal out. 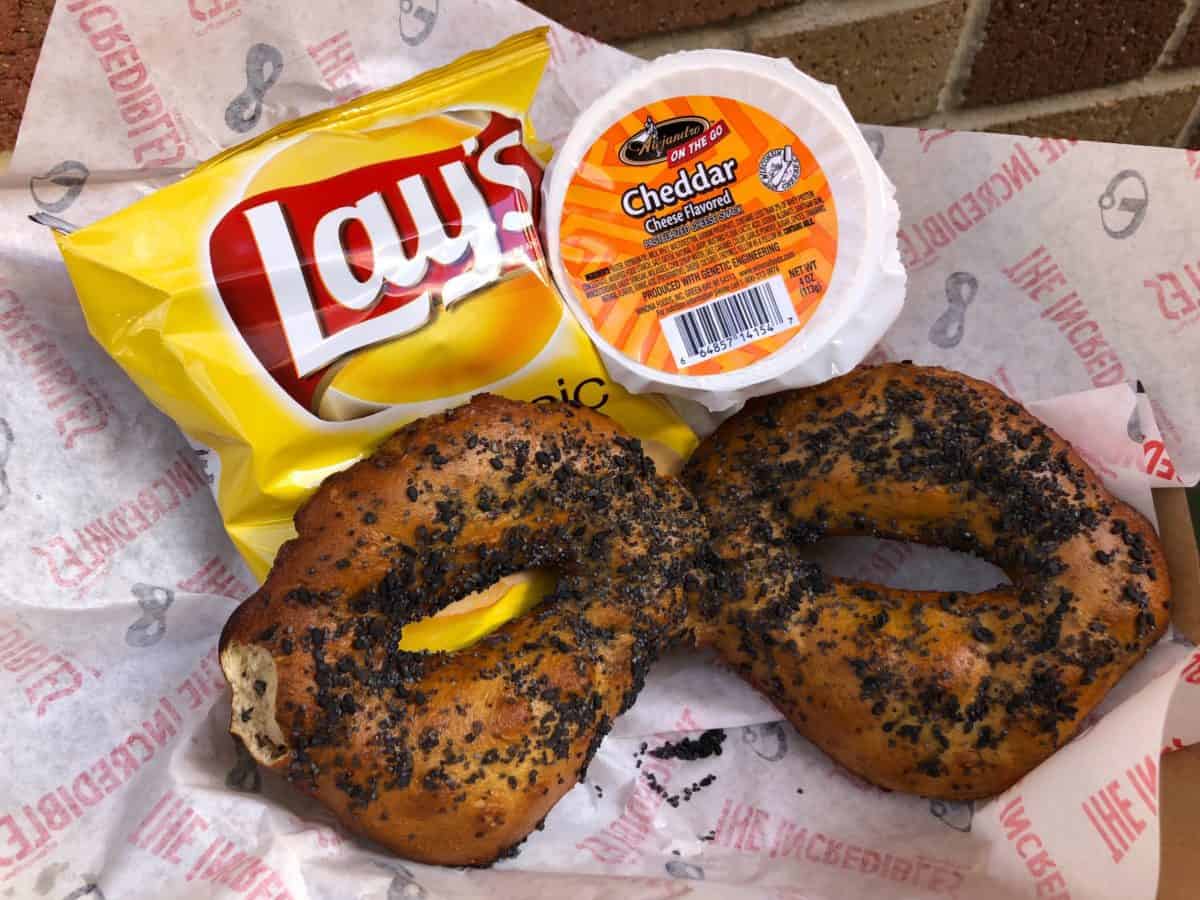 Disney attempted this treat in the past and it was received well, but not all of their Incredibles-themed menus have been a success. This was the same as the pretzel released during previous Incredibles-themed events and it’s otherwise a standard Disney pretzel, save for the black salt and black sesame seeds. 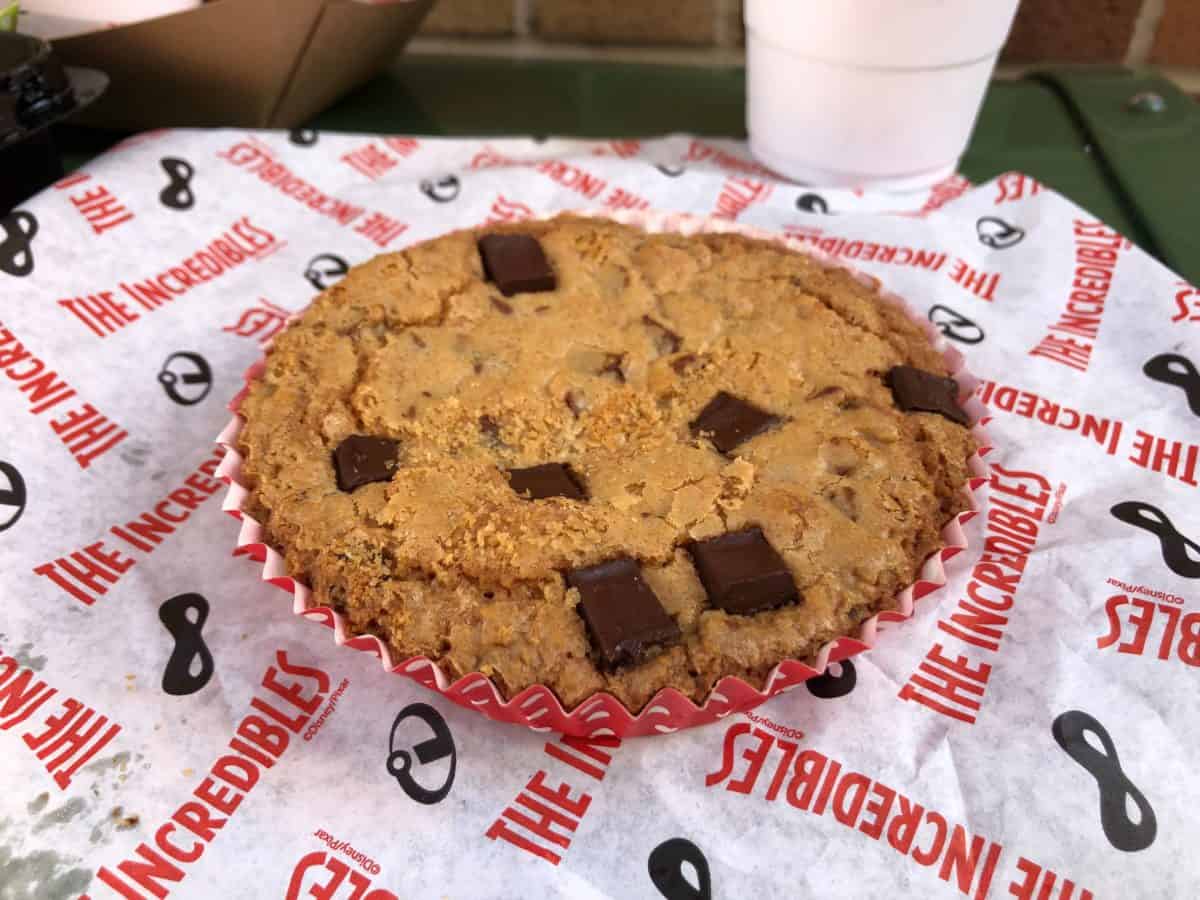 The beloved baked good from Pixar Pier made its way to Walt Disney World! This is the thick, delicious cookie num num we know and love. They’re served warm, which is great, but at the risk of getting a slightly dried-out one. They should probably serve these with milk like they do at Pixar Pier. 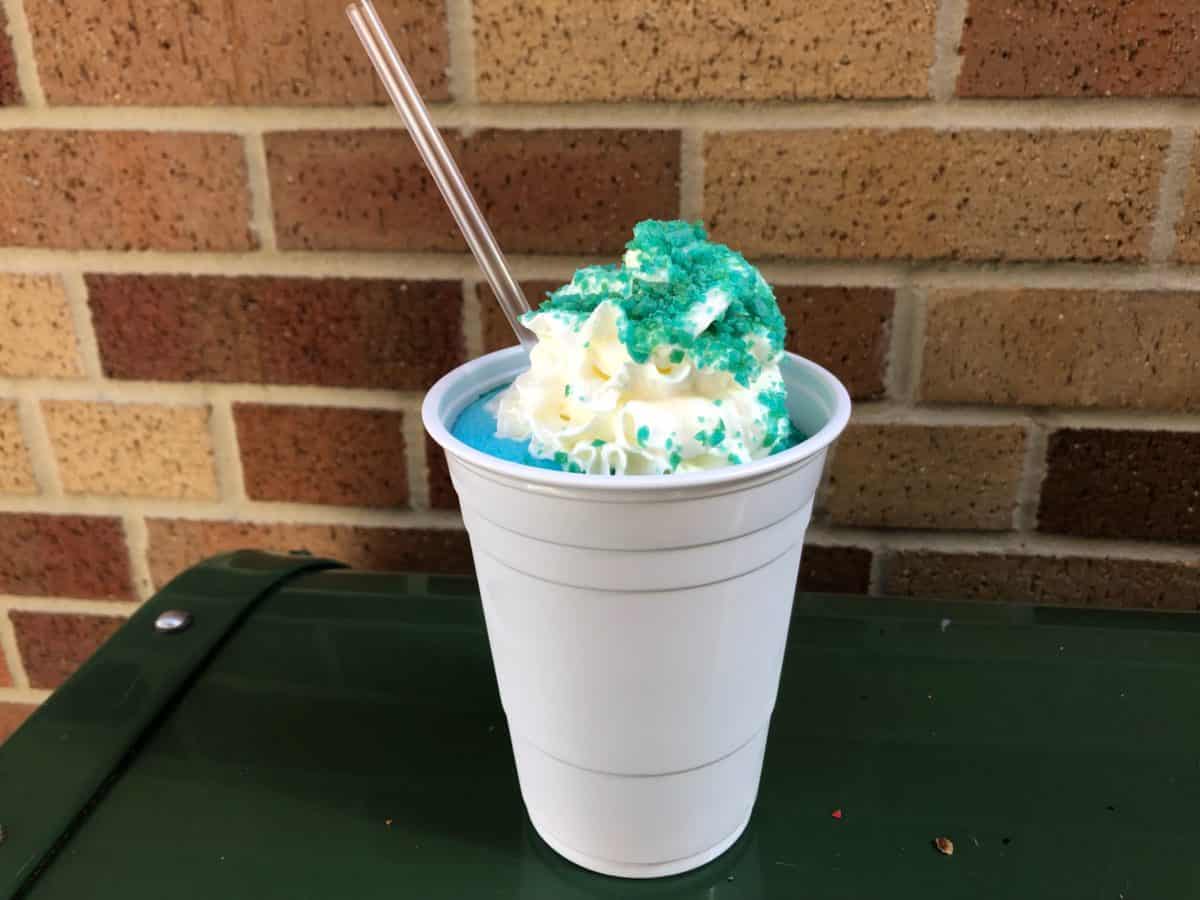 This is a Fanta Blue Raspberry slush with whipped cream and Pop Rocks. Besides the addition of the popping candy, it’s basically your average slush. The cool thing is, you can hear the pop rocks actively popping up top. 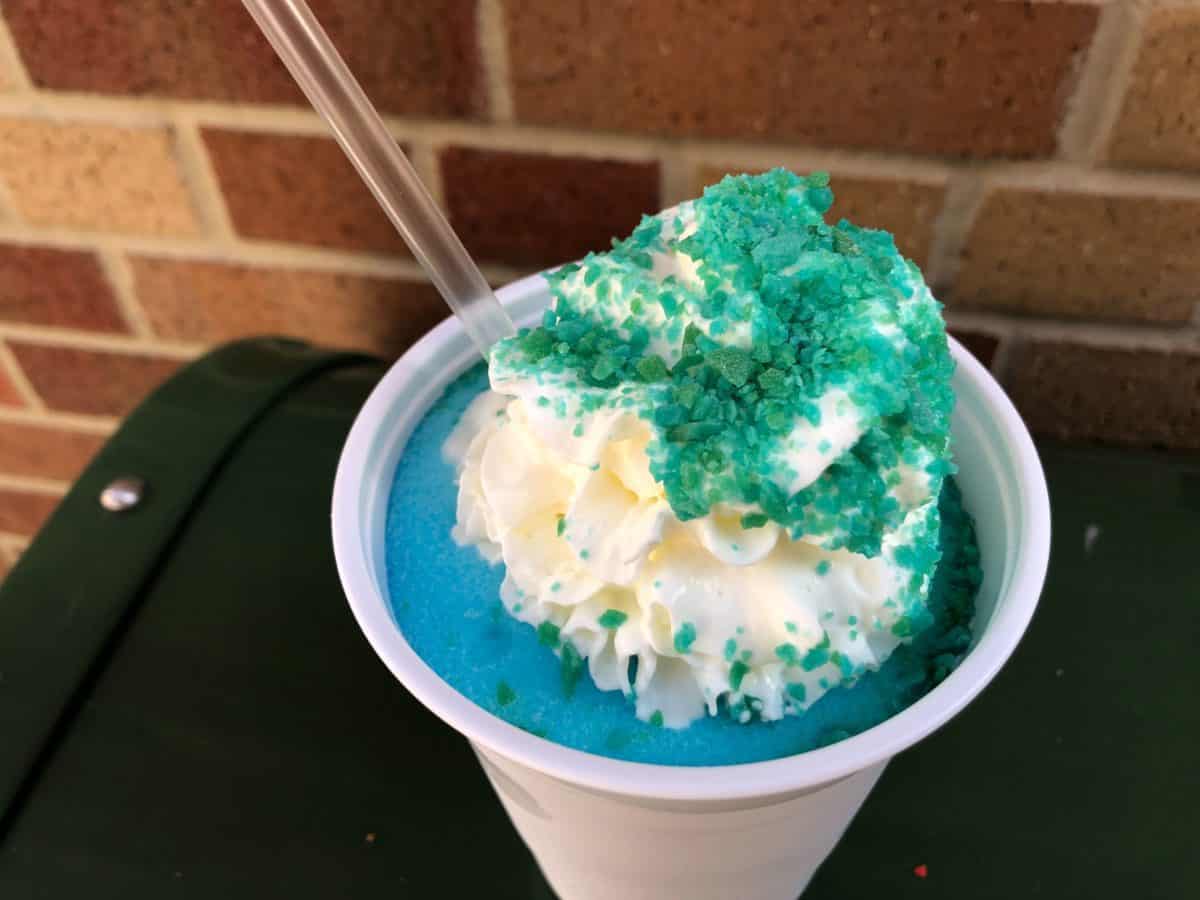 We’d consider it if we had a hankering for slushies. 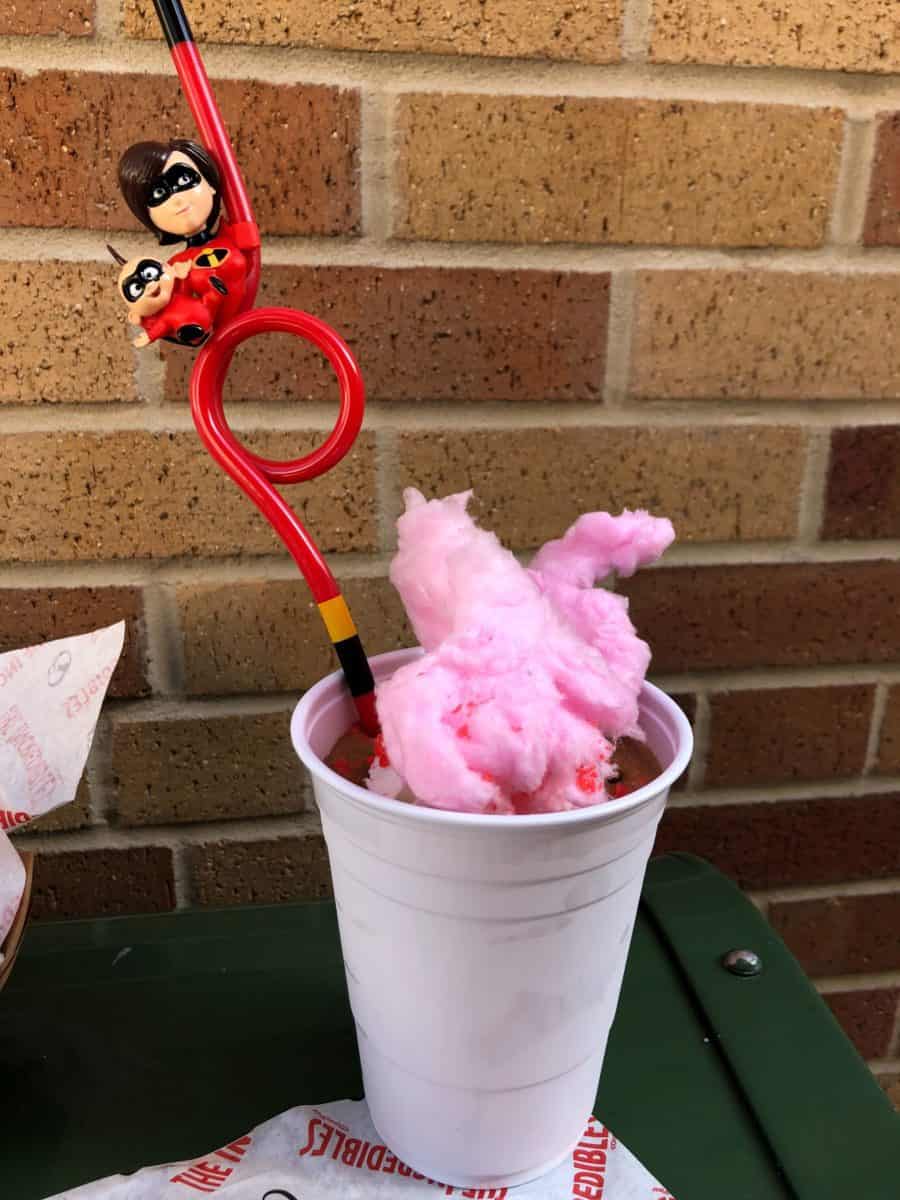 This is a Coke slush topped with cherry cotton candy and even more Pop Rocks. You can’t get all the flavors in one because the toppings don’t really mix into the drink, but the cotton candy is good on its own. Again, another otherwise basic slush just dressed up a bit. 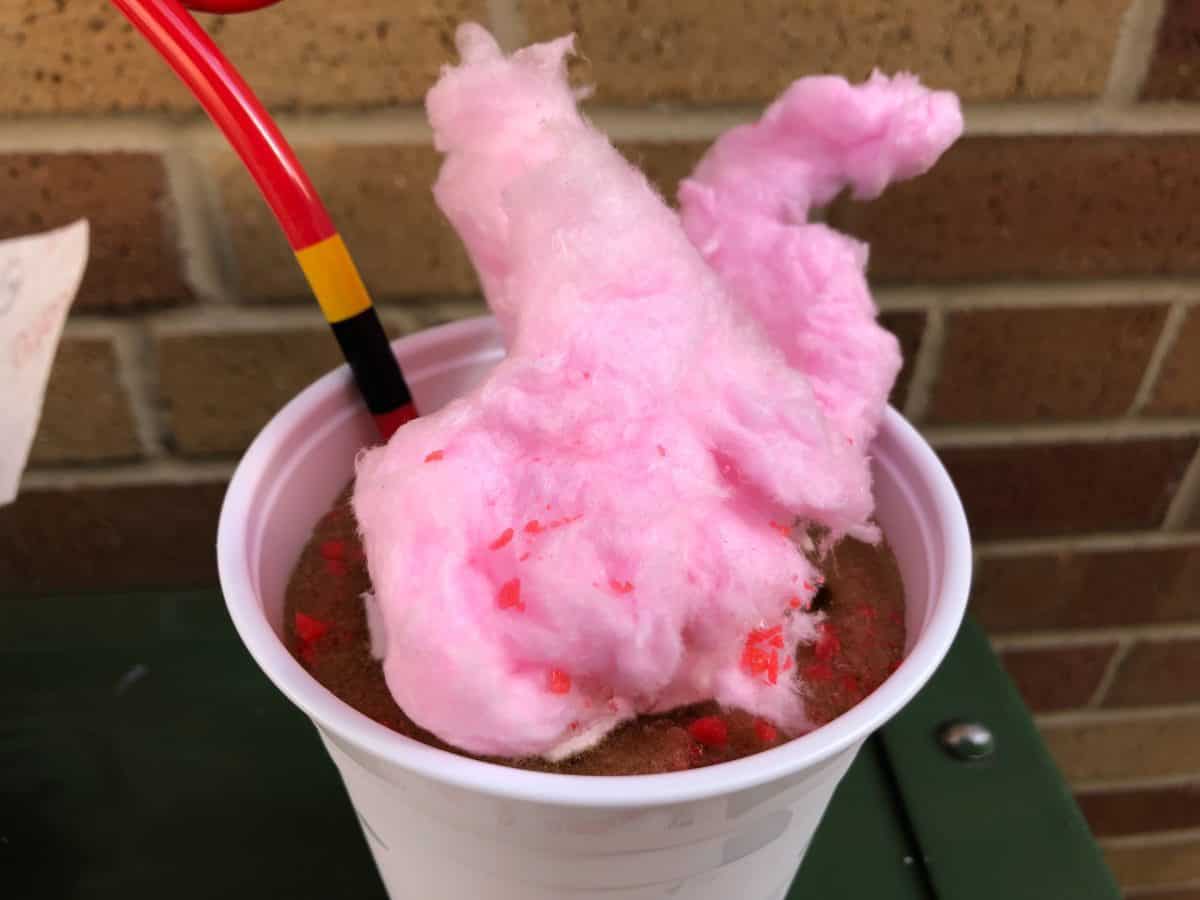 The Elastigirl and Jack-Jack straw sells for $4.00. 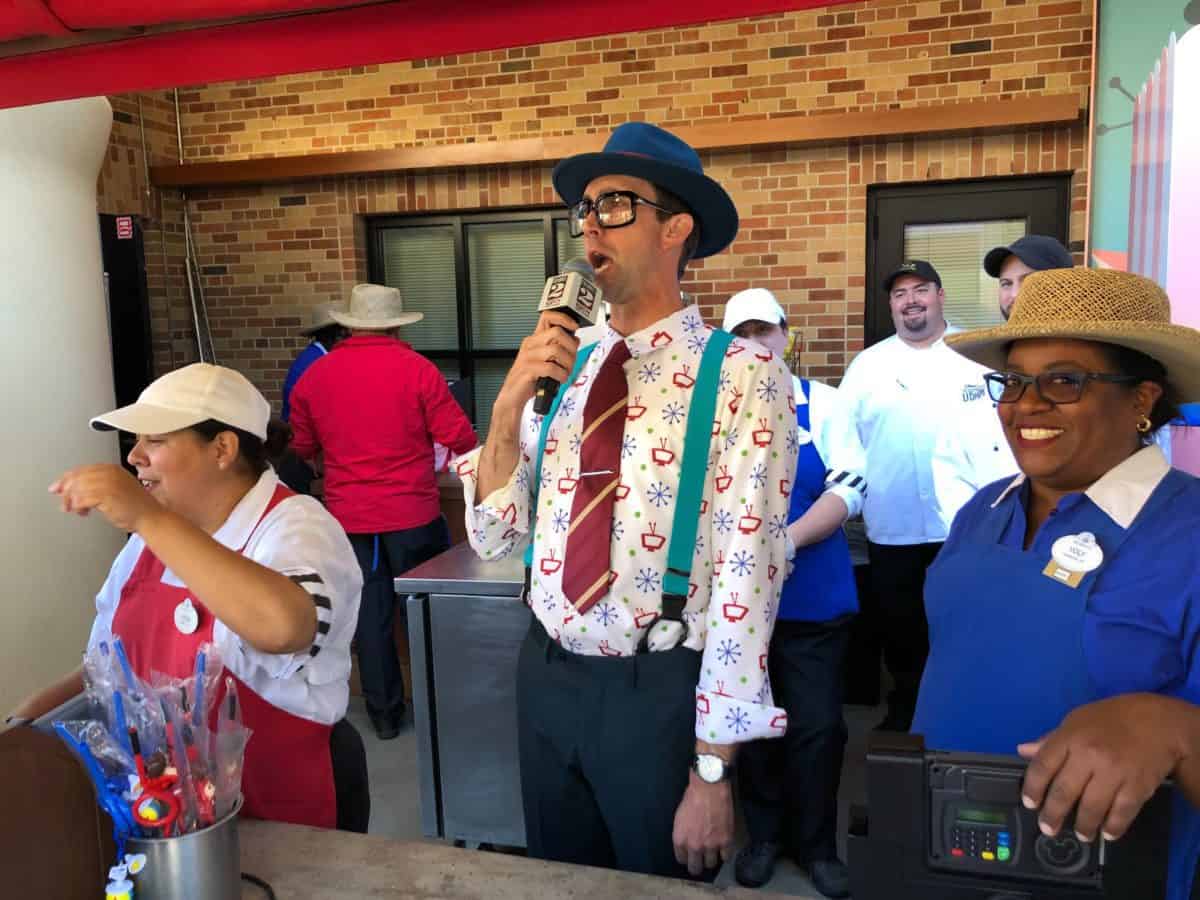 If you notice on the left, they also have Luxo Jr. straws! Green Alien popcorn buckets are also available at this location.

Not featured on the main menu are these two additional dessert options, the Key Lime on a Stick and Apple Cobbler.

All in all, Neighborhood Bakery has lots going on for it despite being just another kiosk. Its fresh sandwiches and cookie num nums are sure to make this a lunch/light dinner hit.

VIDEO: New “Move It! Shake It! MousekeDance It! Street Party” Debuts at The Magic Kingdom