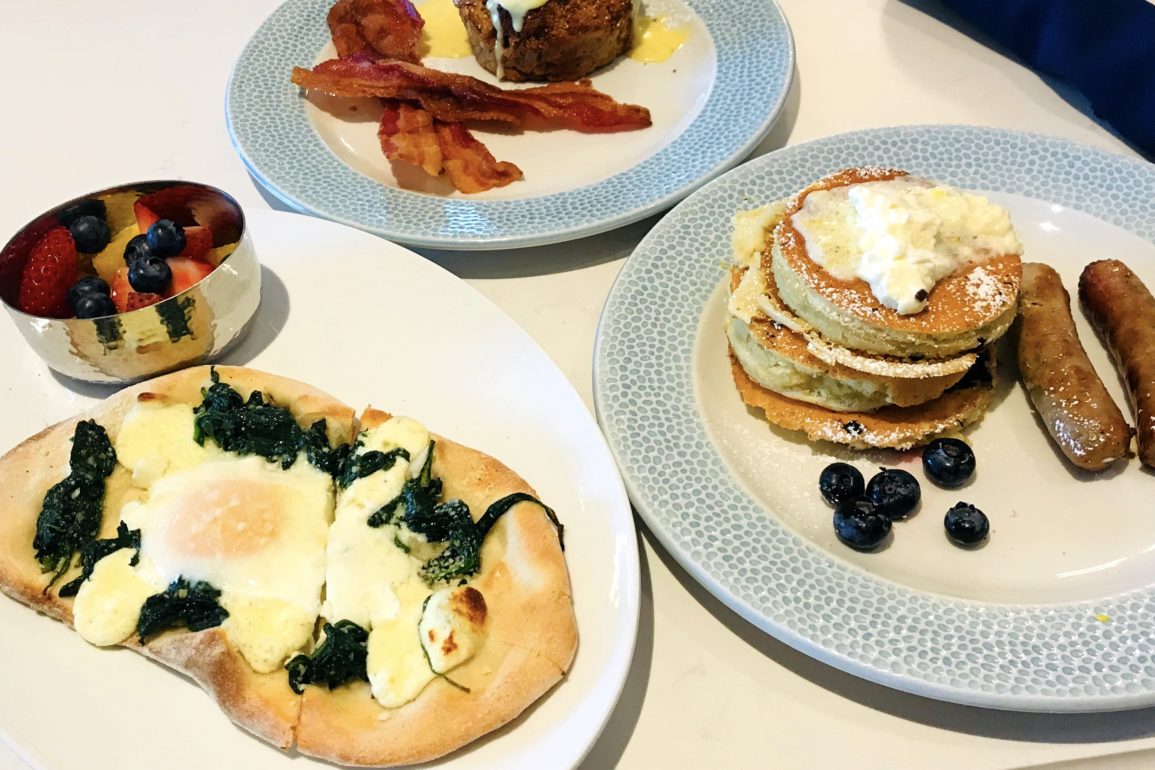 If you’ve been following along with our coverage of the new Disney’s Riviera Resort, you’ll know that so far, the resort has one of the best Character Breakfasts on property, and we’re happy to relay that the quick service morning offerings don’t fall far behind. 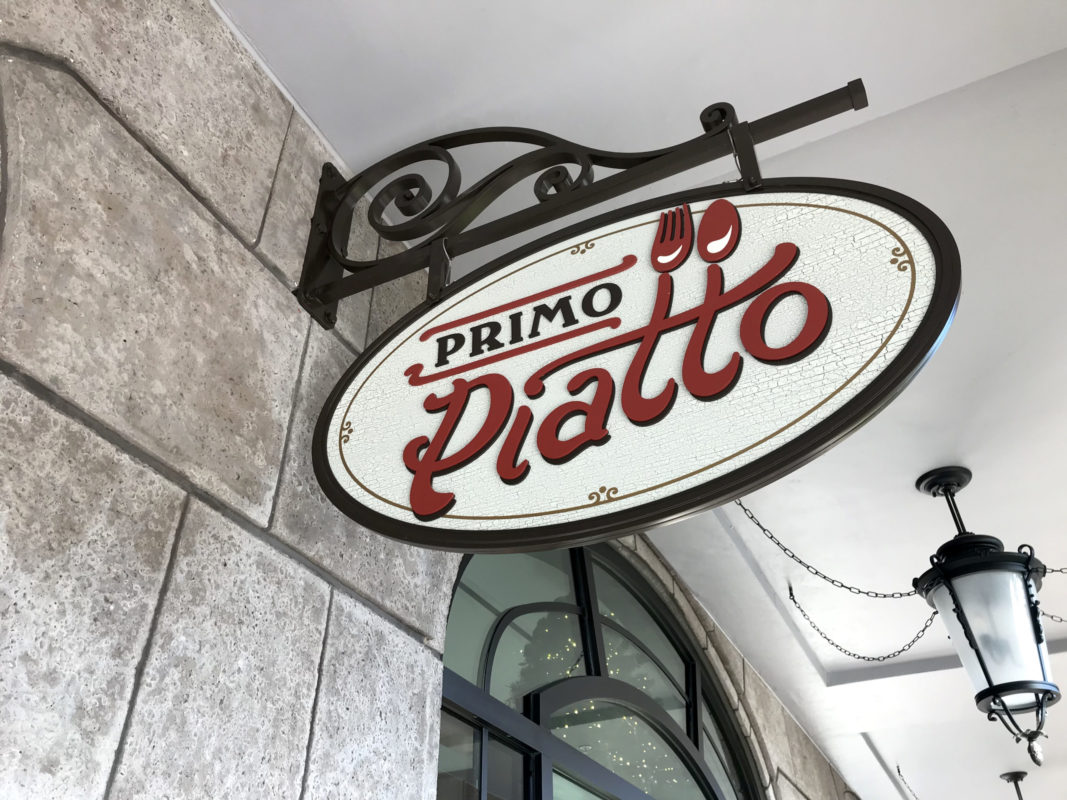 Primo Piatto, the resort’s counter service restaurant, has proven to be one of the best executions of the fast casual concept, with excellent service, real silverware, and fresh, piping hot food. We tried out a few breakfast dishes this morning, and can’t wait to return for lunch and dinner based off of how good everything was. Let’s dig in! 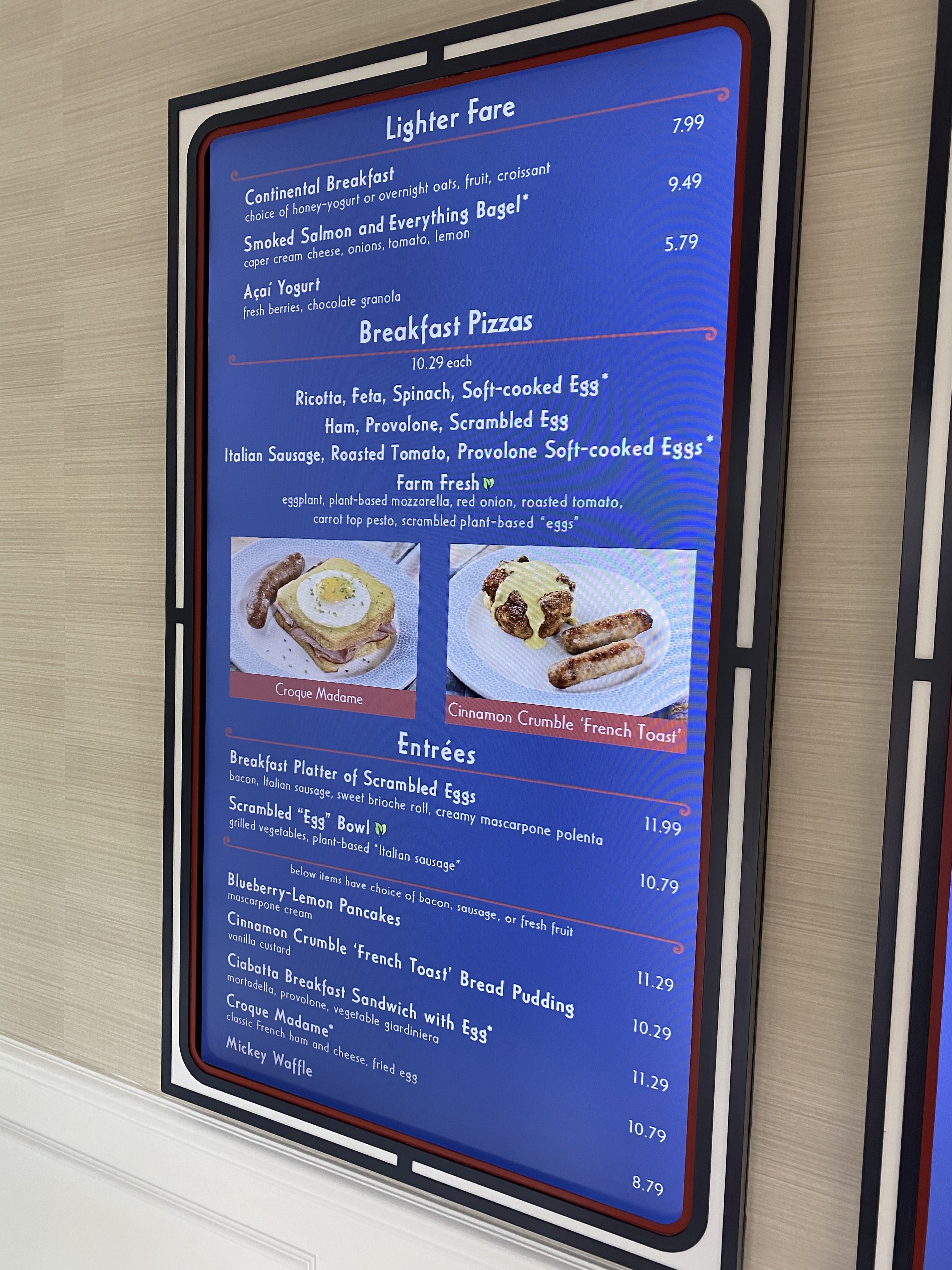 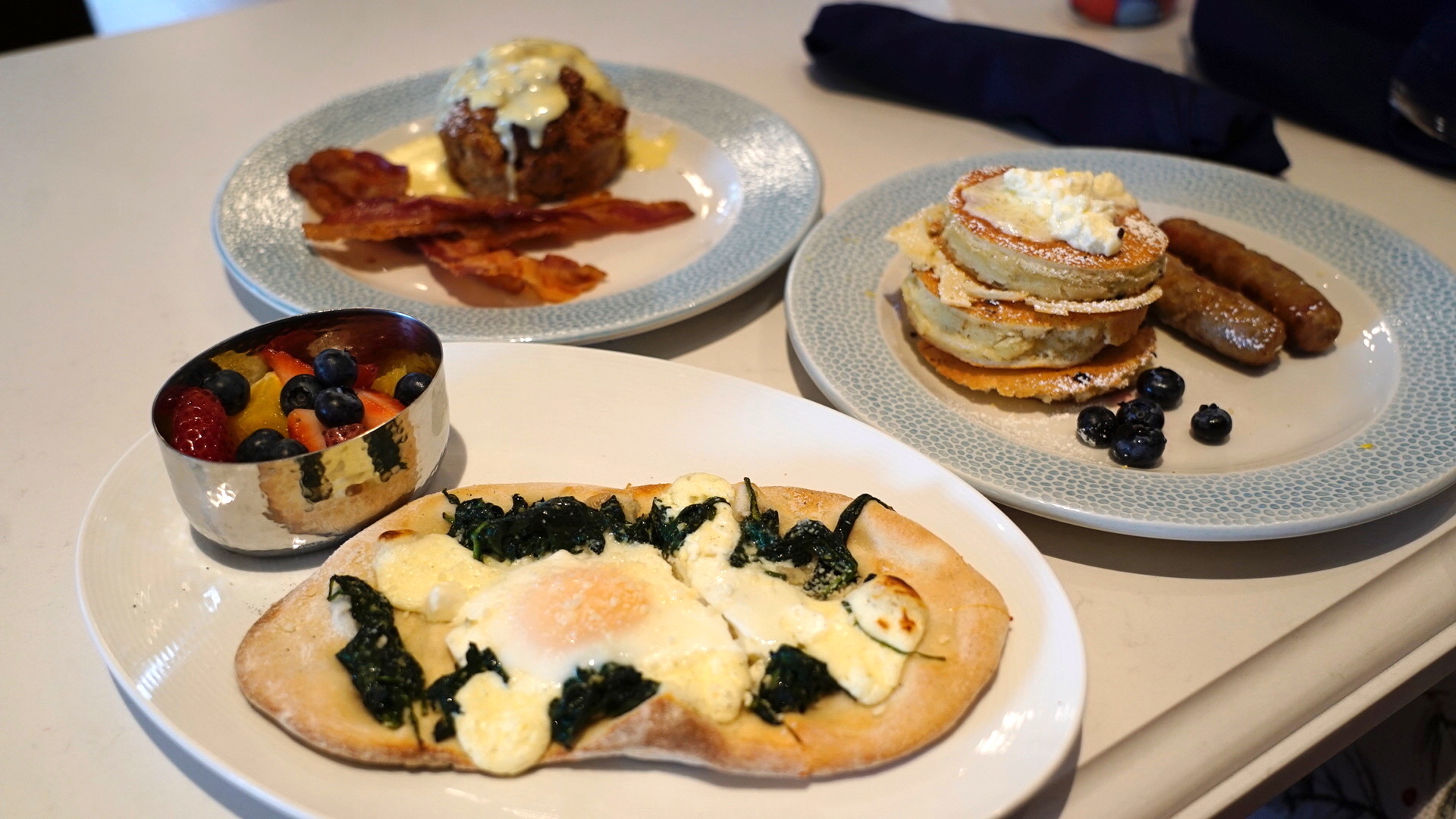 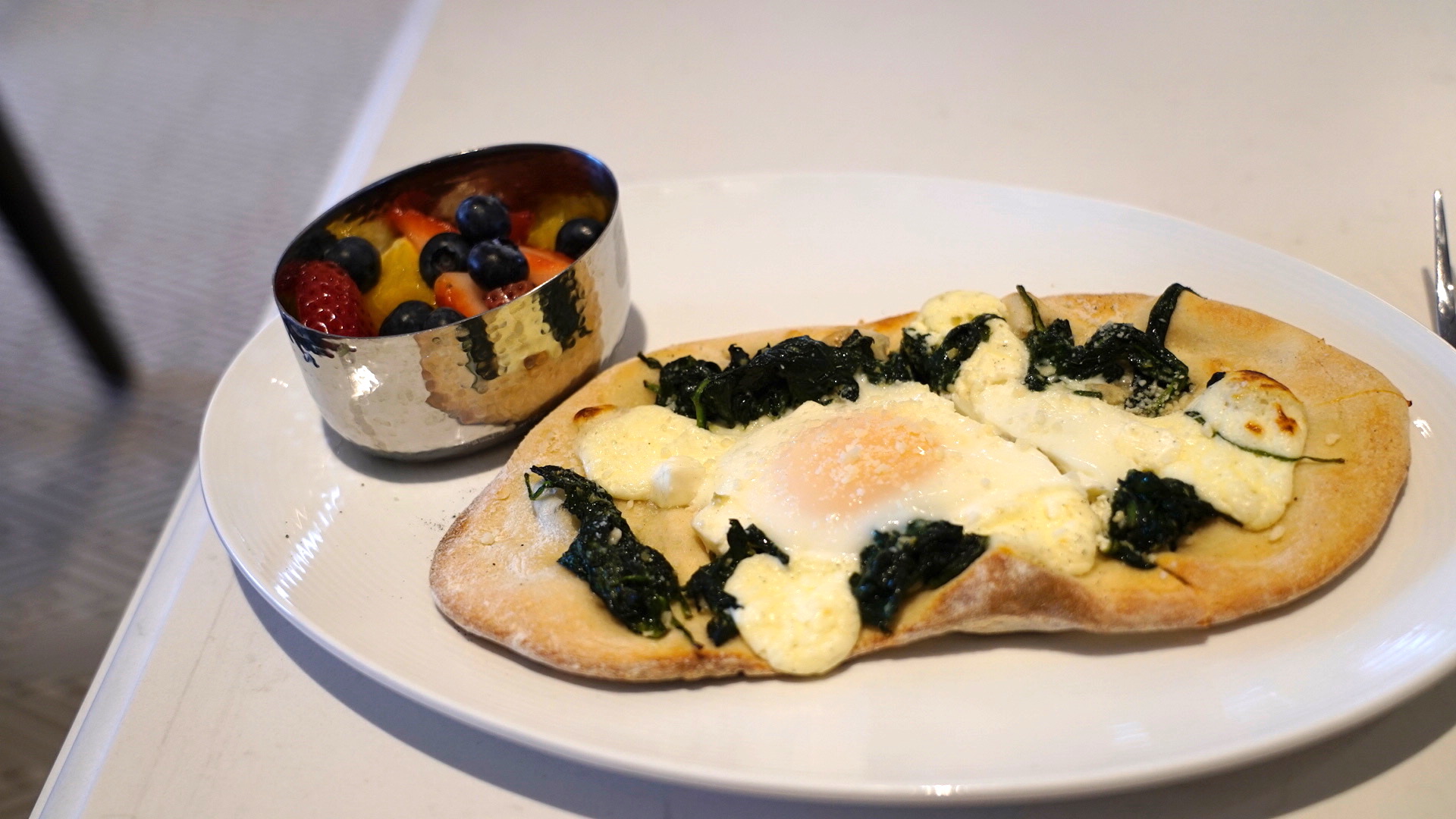 All of these dishes have warnings due to dangers of raw egg… me, I’m overjoyed to see a proper soft-cooked egg with a runny yolk at a Disney restaurant, especially a counter service! (I remember being excited about the poached eggs at Be Our Guest only to realized that they were fully cooked through.) 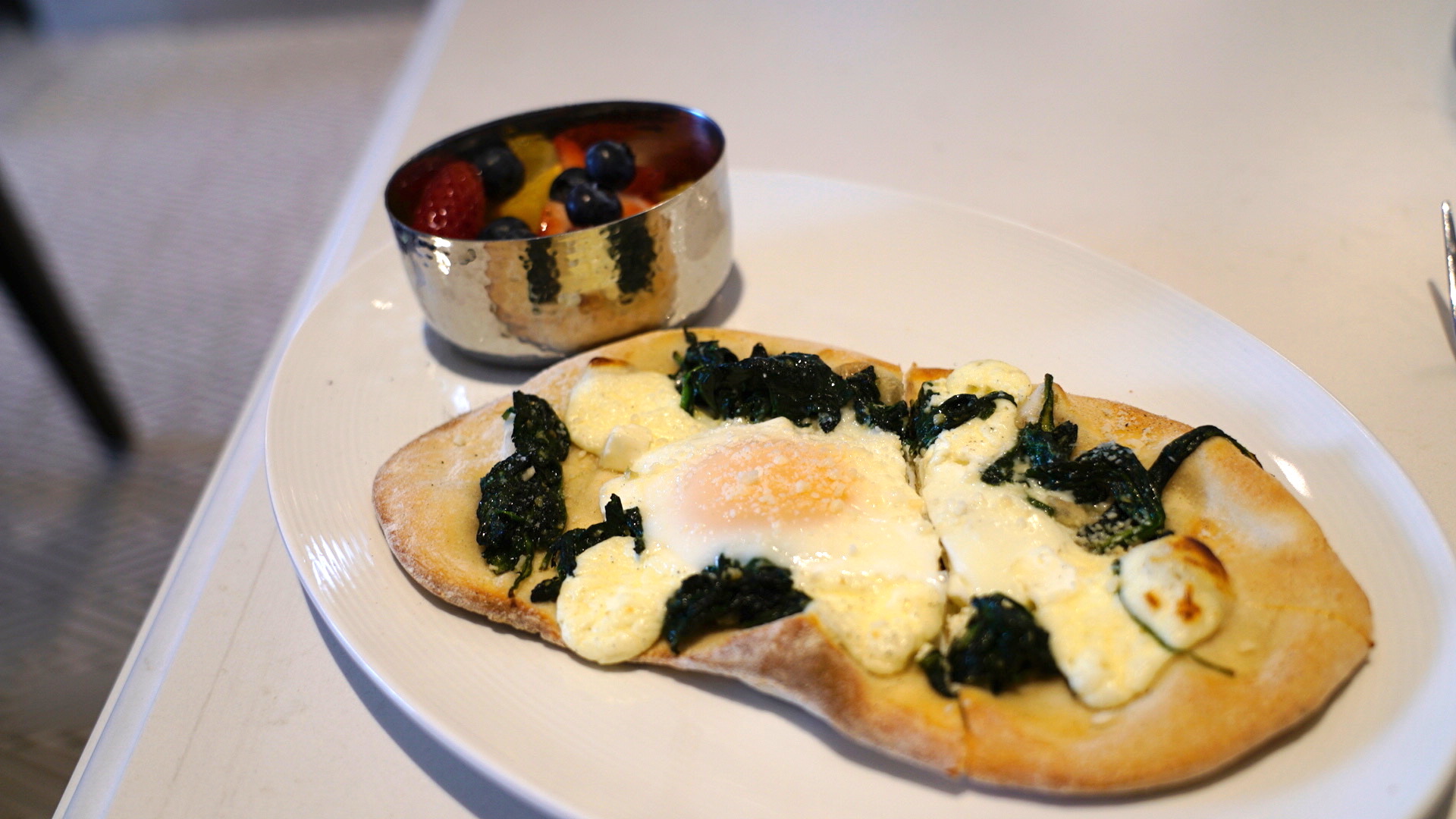 What we have here is a free-form pizza crust baked to a crisp on a hearth oven (you’ll know because of the slightly burnt bottom.) It’s topped with dollops of fresh cheeses like ricotta and feta, plus some spinach. While this looked amazing, it tasted somewhat plain, almost like it needed salt… unless you got a full cheese chunk in your bite, then it was all kinds of delicious. While this is eons better than any quick service pizza you’ve had anywhere else on property, it still suffers from a lack of toppings to the edge. 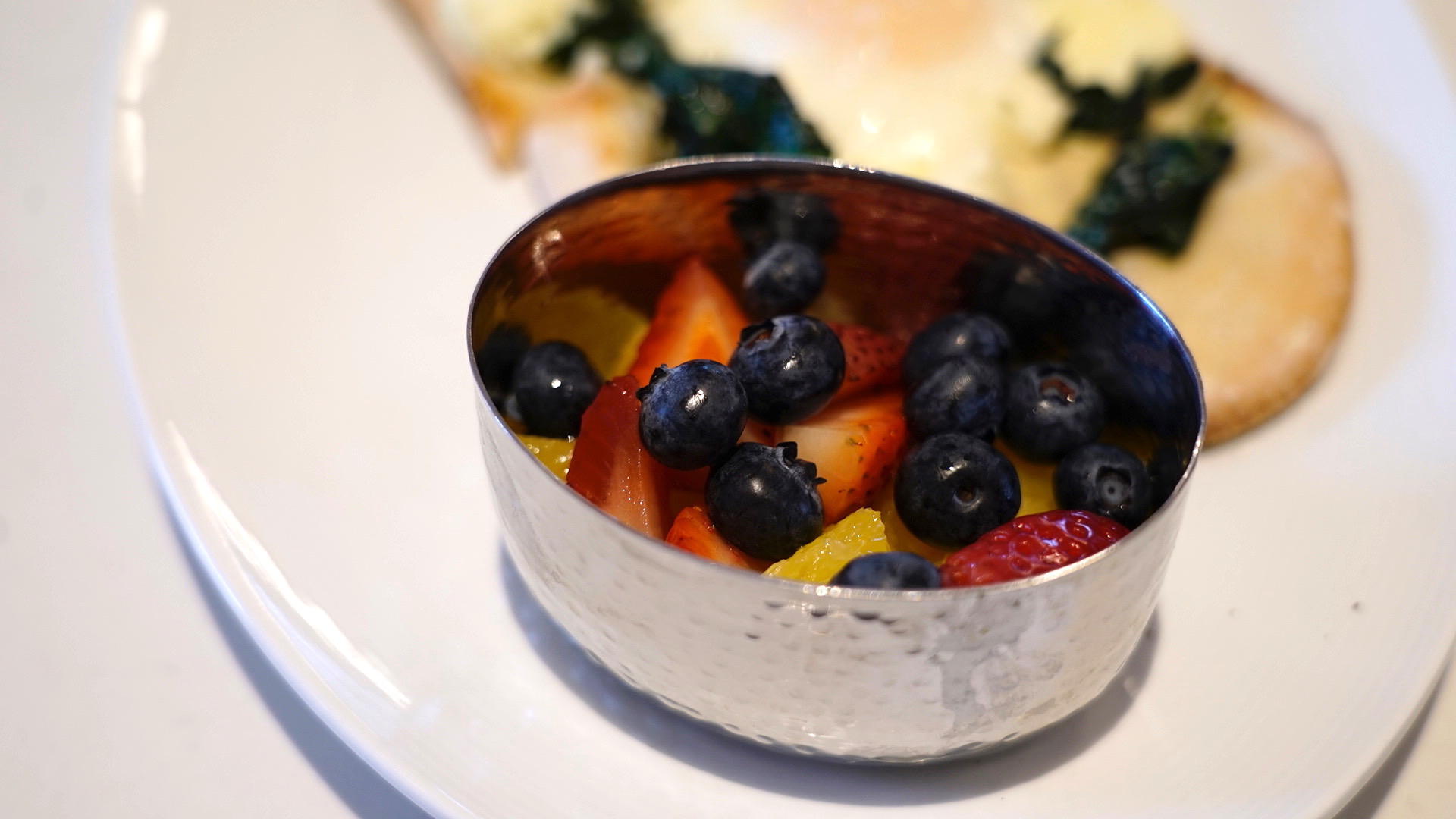 The pizza didn’t advertise coming with a side, but we were pleasantly surprised by this tiny cup of fresh fruit. There were strawberry slices, blueberries, and orange segments, and not a singly slimy melon chunk in sight.

Classic French Ham and Swiss with a Fried Egg served with choice of side. 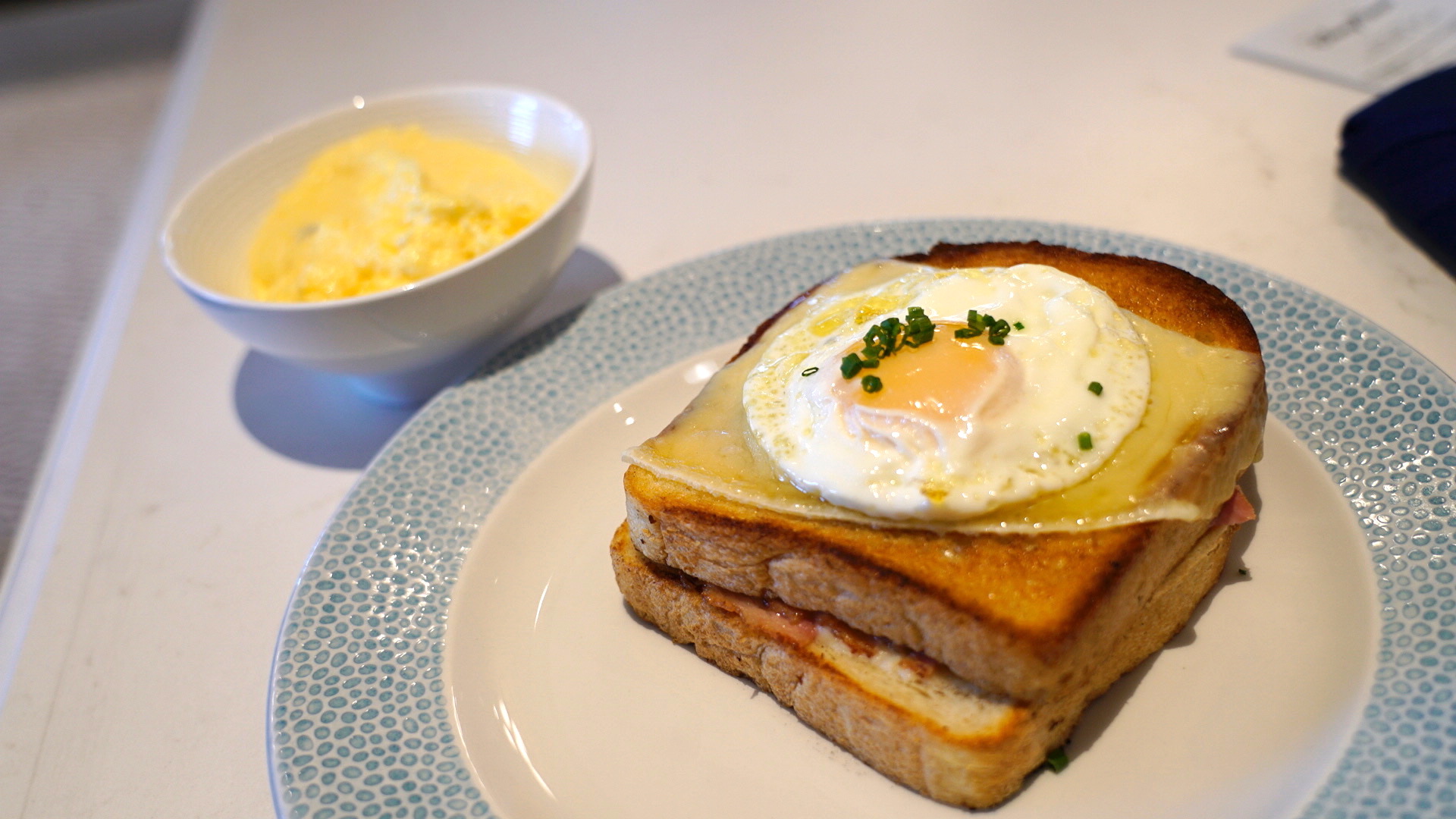 While we struggled to recommend the Croissant au Jambon from Topolino’s Terrace breakfast at $41, we can definitely recommend this Croque Madame. 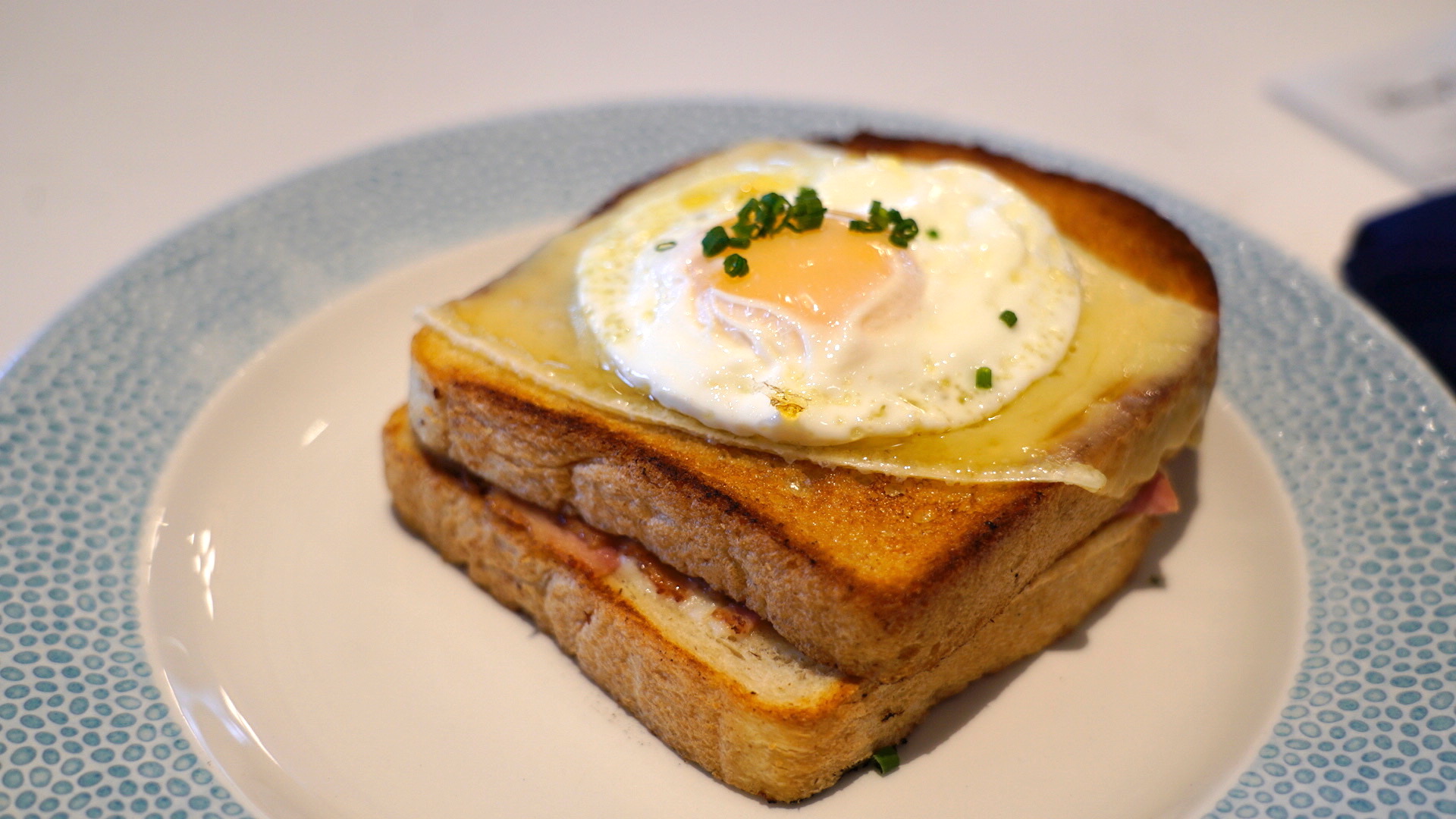 There’s nothing revolutionary about this sandwich, it’s your average Croque Madame, but we have to applaud, again, the perfectly runny egg it’s topped with. (This time fried as opposed to baked on the pizza.) 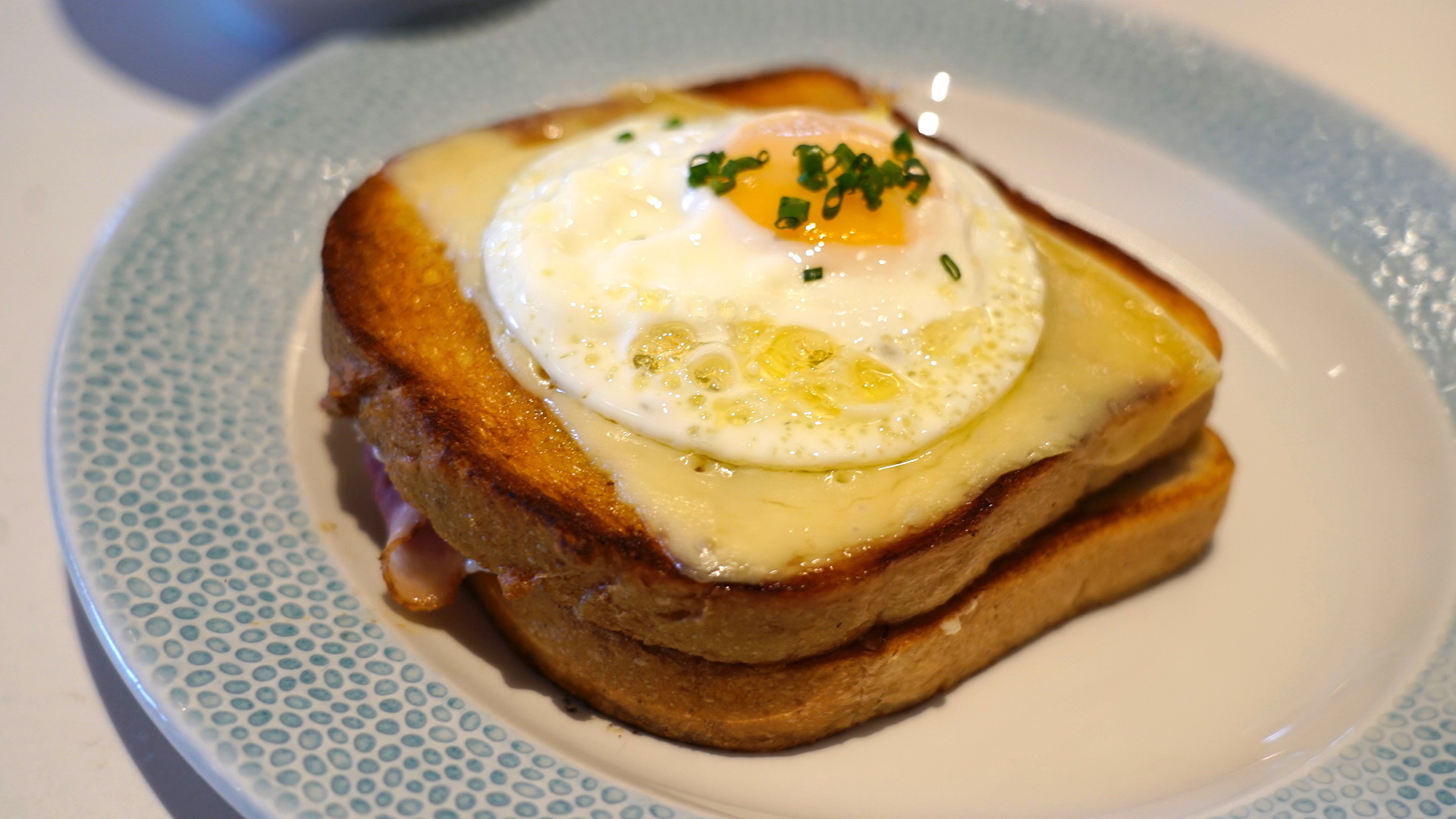 This would make for a hearty morning meal, especially if you’re arriving near the latter breakfast hours.

While not advertised on the menu board, we were also offered a side of mascarpone grits––I mean, polenta. Much like the ones served with the steak at Topolino’s for breakfast, these are perfectly creamy and a unique side compared to the usual potatoes.

Three, Fluffy House-made Pancakes filled with fresh Blueberries topped with Mascarpone Cream and Lemon Zest served with choice of side 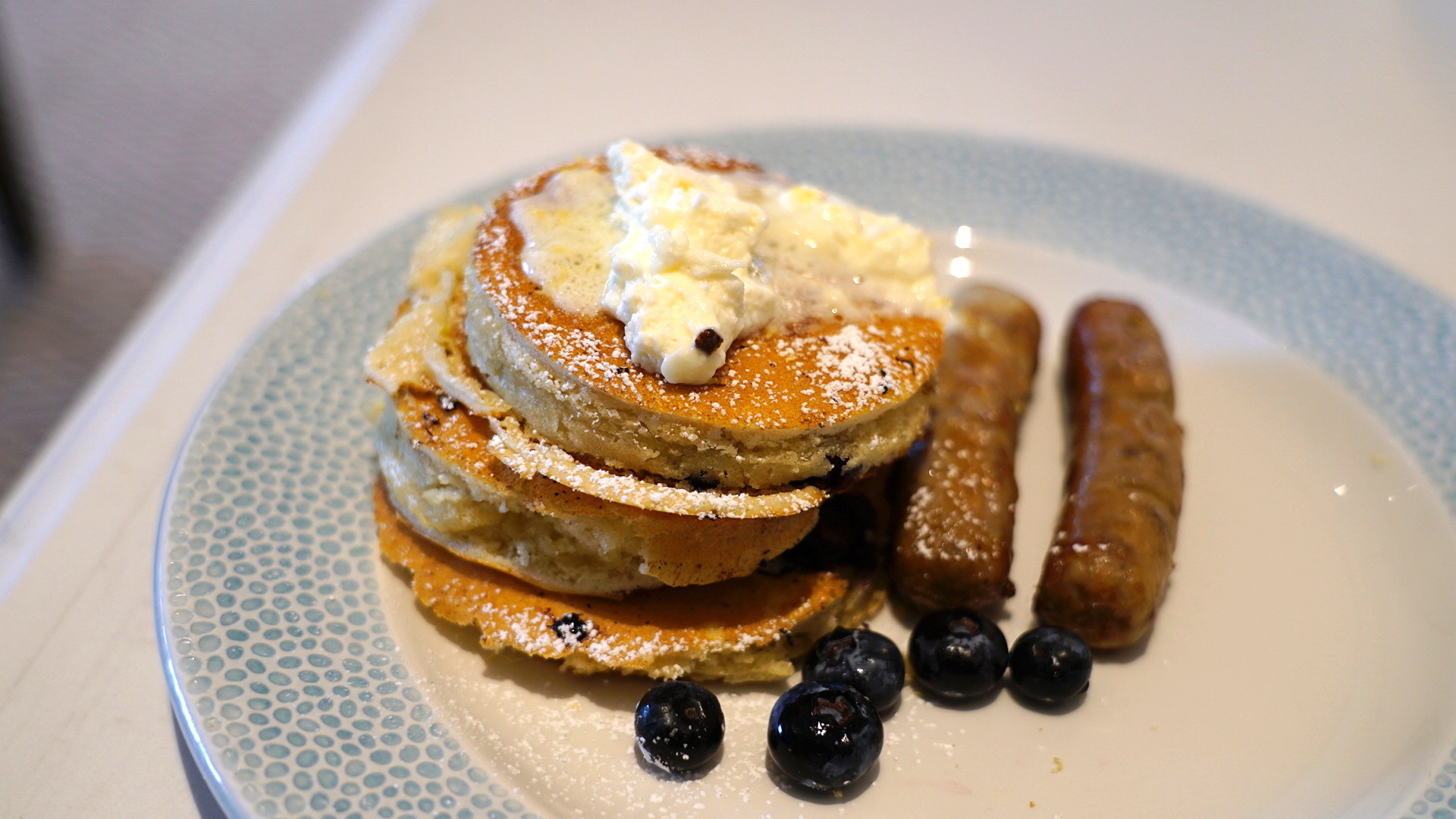 After a huge dinner at Topolino’s last night, the last thing I wanted to do was tuck into a stack of pancakes, but these are actually incredibly light and fluffy. 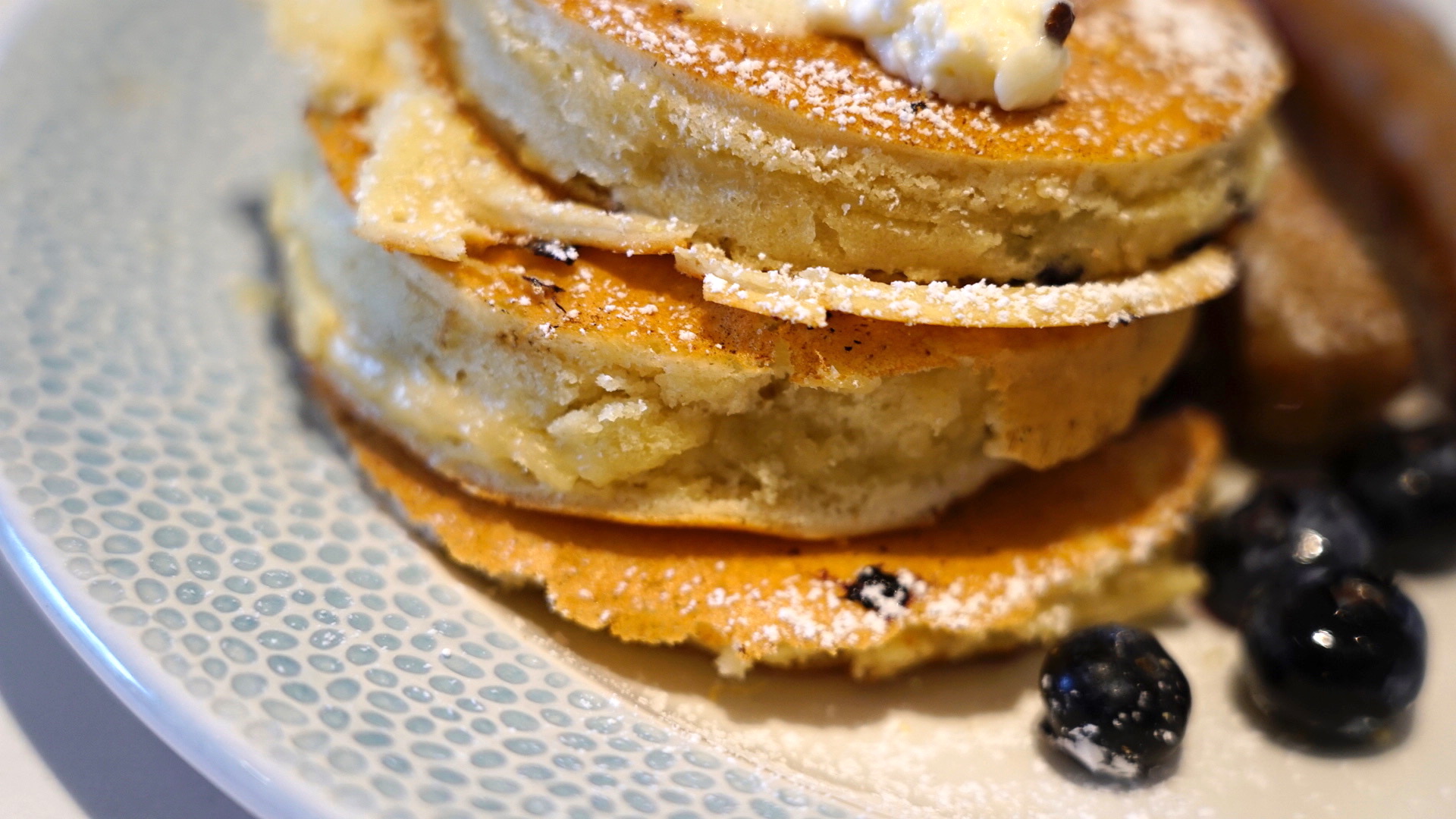 I was pleasantly surprised by the crumb on these too. These aren’t dry and ashy, and they don’t taste like they’re from a mix, either. The top crunchy layers give way to a soft, dense interior that’s studded with juicy blueberries. Between the fruit and creamy topping, these were perfectly sweet as-is. They didn’t even need syrup… (but if you feel inclined, there are some packets behind the registers.) 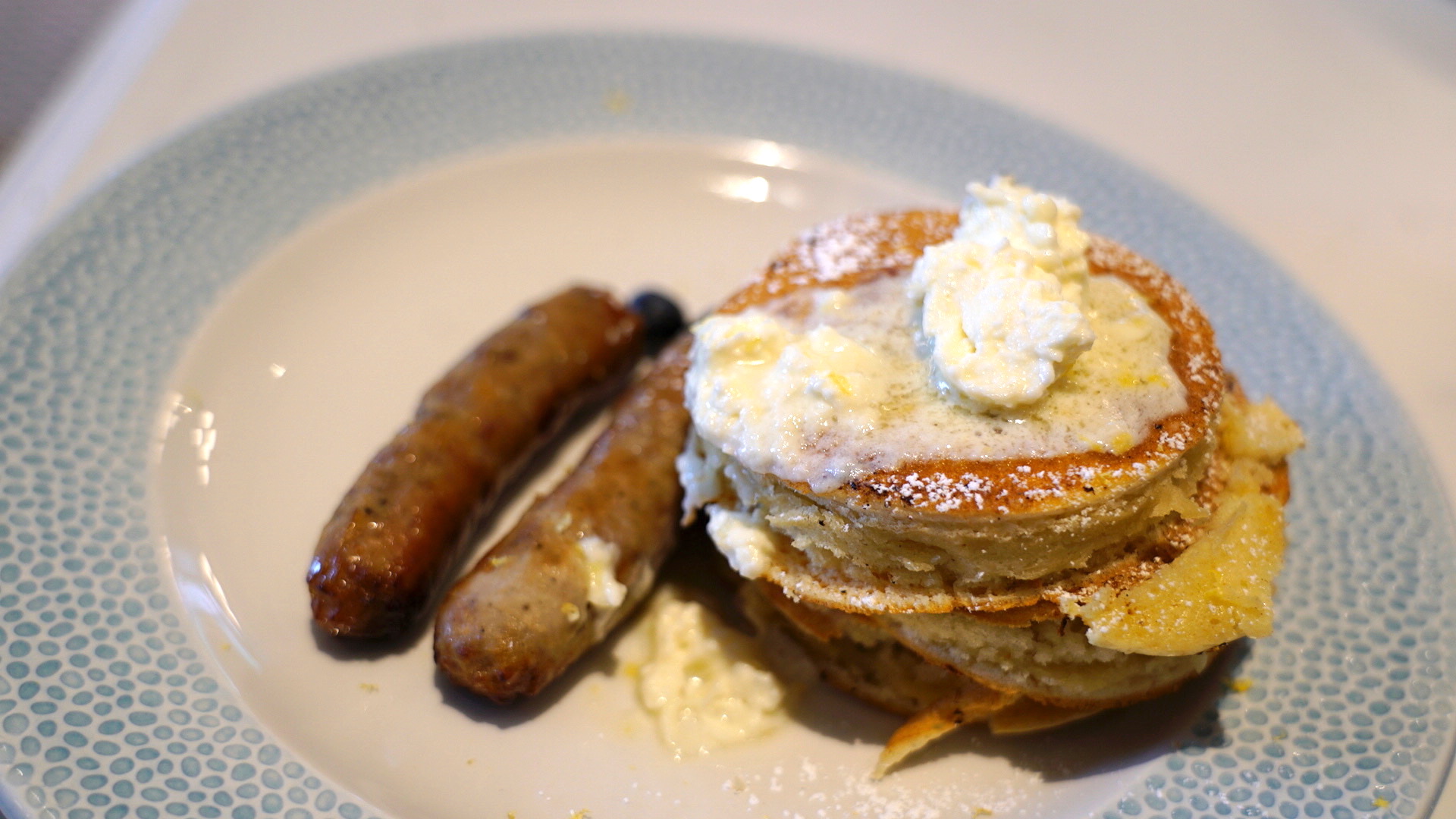 The mascarpone cream was delicious, an authentic Italian touch. My only complaint here is that it needed another dollop of it. A small tub would do. 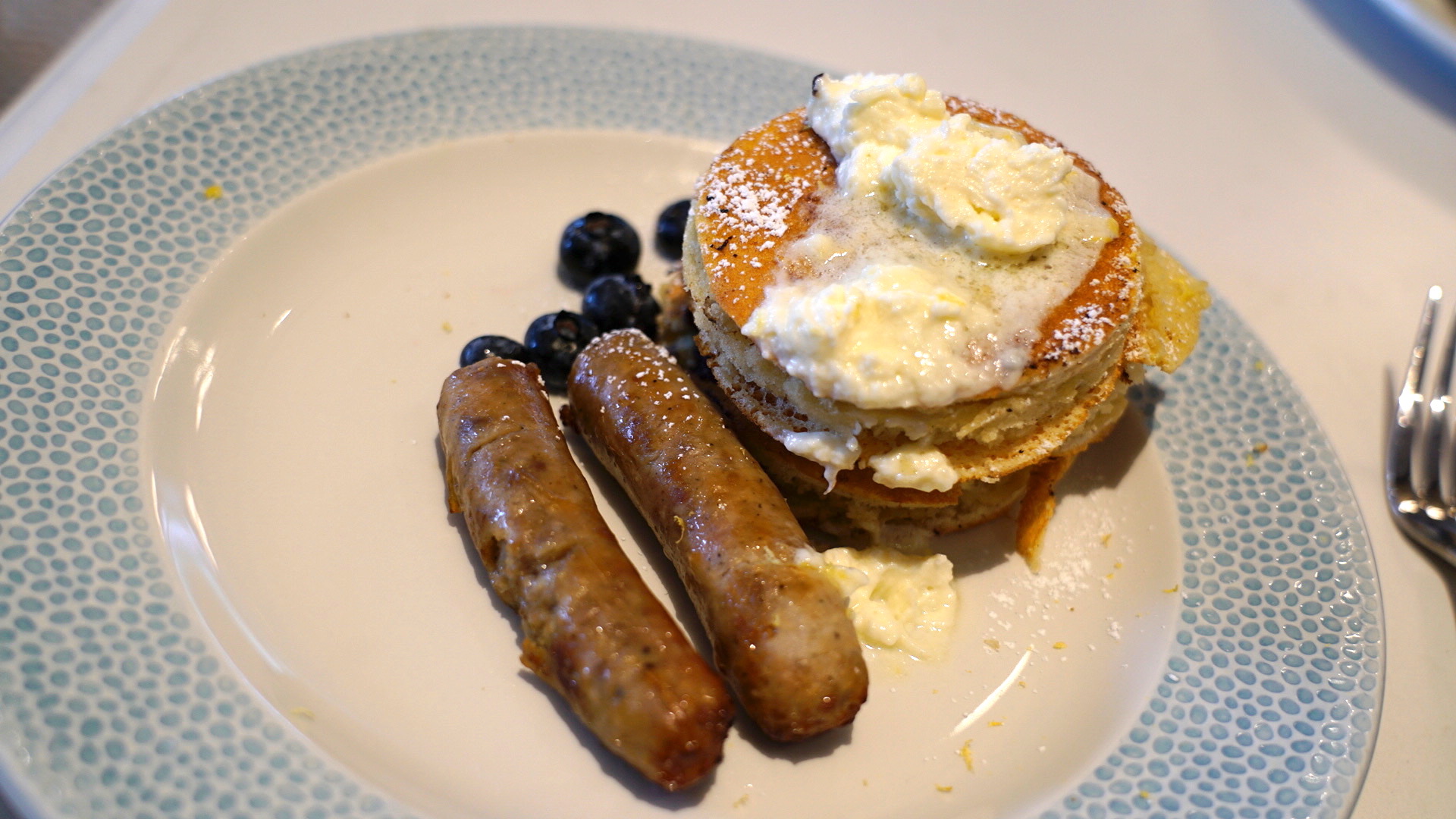 The breakfast sausage was billed as being Italian, and while robust, these didn’t taste all that different from the usual breakfast sausage that accompanies these breakfast dishes. I also appreciated the five (5) blueberries that were added as garnish. 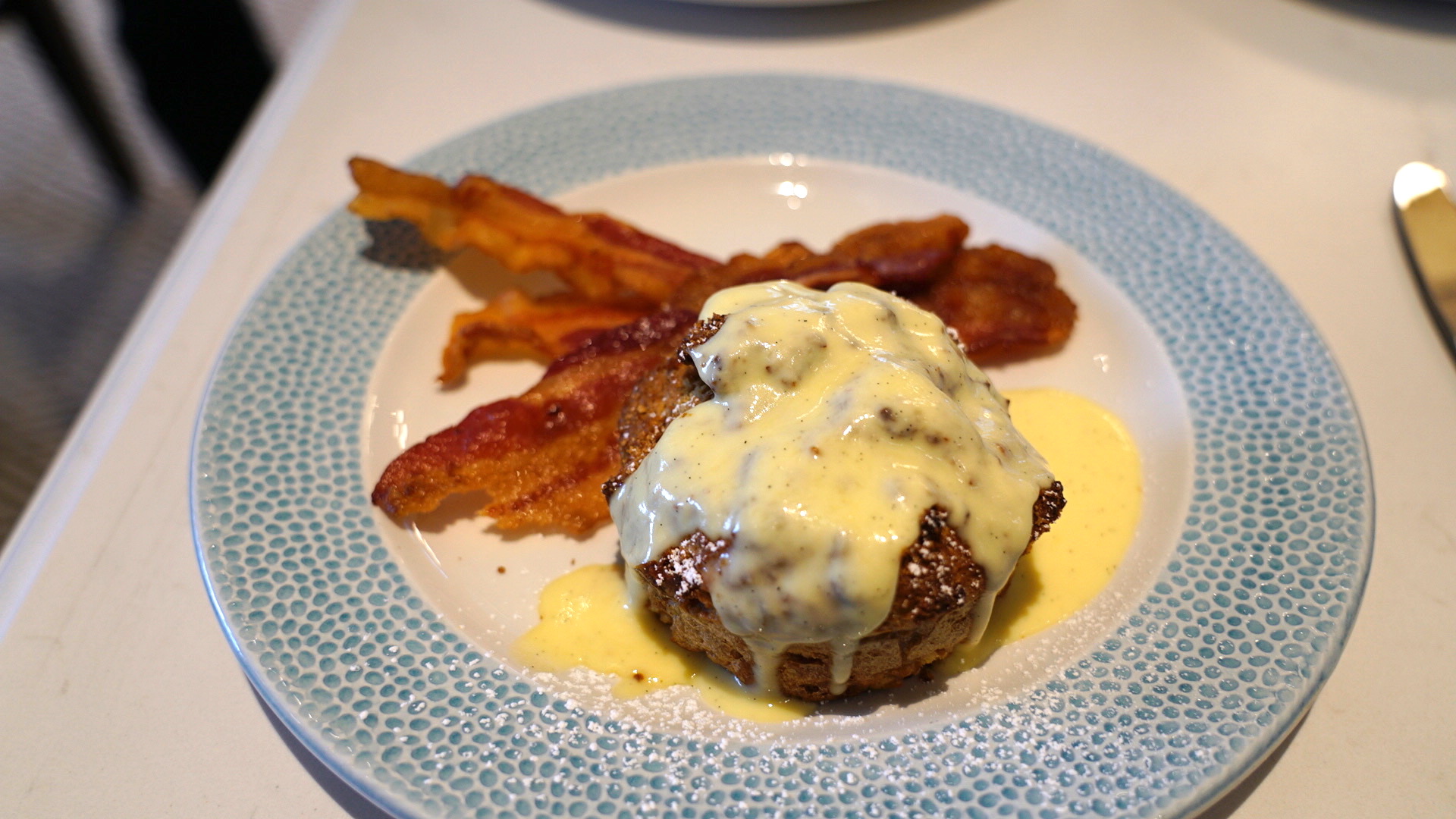 The receipt may bill this as simply “French Toast” but be warned, this is a thick puck of bread pudding that’s sure to stick to your ribs. I appreciated the thick, vanilla-bean speckled custard that’s poured over it, and the bacon that came with it was cooked to crisp perfection. We couldn’t tell where the cinnamon crumble was beneath all of the custard, but there was a slight cinnamon taste throughout. 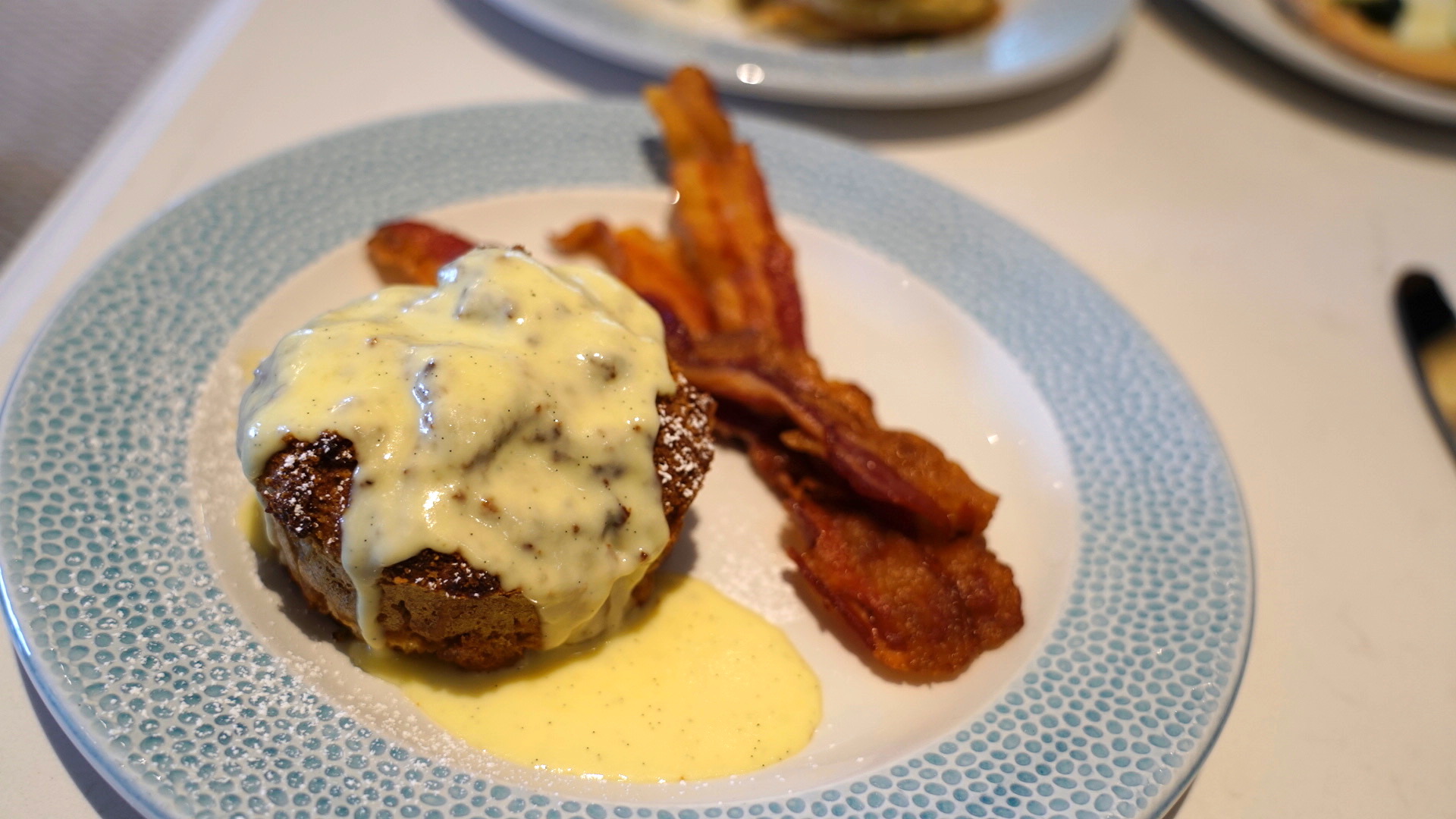 I’d still pick the blueberry-lemon pancakes over this, but if you’re craving bread pudding, this isn’t a bad option. 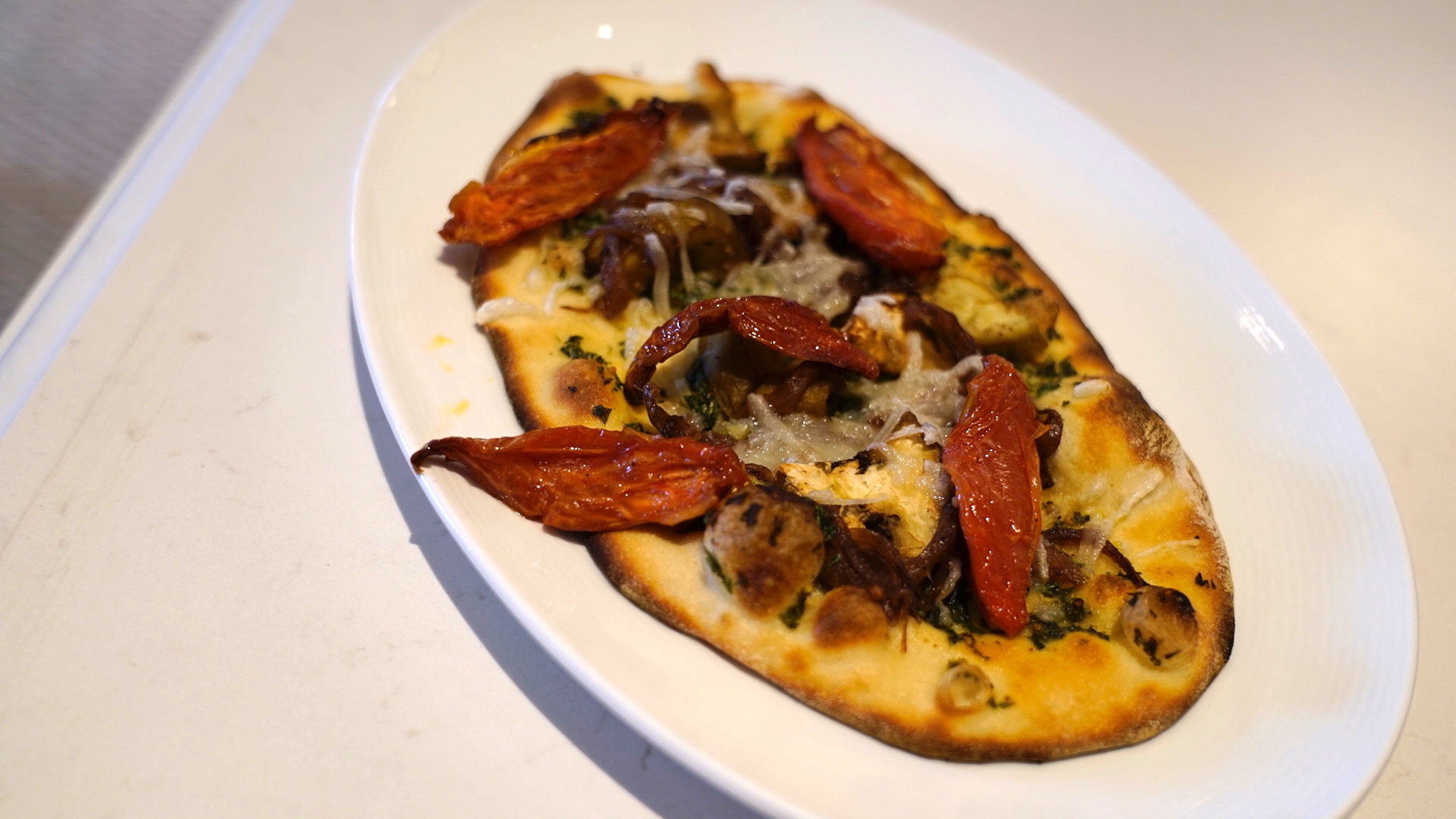 This is similar to the vegetarian pizza that’s offered at lunch, and is good if you’re okay with super savory breakfast. The carrot-top pesto does give it a strong herb taste, but it’s earthy and pairs well with the toasty pizza crust and roasted vegetables. 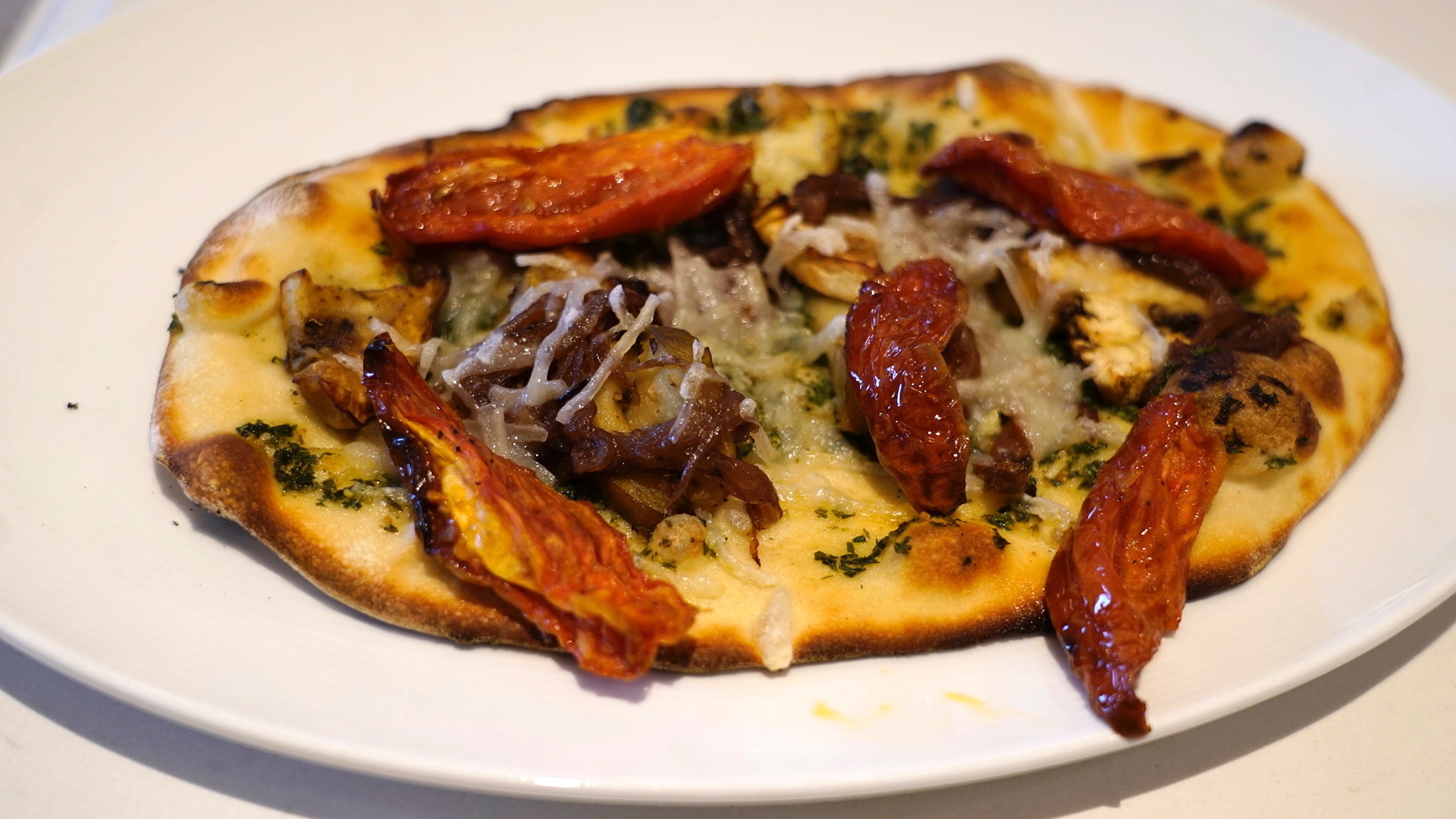 You can order a similar version of this pizza for lunch, except for breakfast you have the addition of plant-based eggs. While not our favorite out of the breakfast lineup, it’s a great option for plant-based eaters.

Overall, it’s another solid breakfast spot here at the resort, whether you’re staying here, making a stop on the Disney Skyliner, or looking for a casual place to have a morning meal, look no further.