Are you ready for #ArtfulEpcot? We sure are! The EPCOT International Festival of the Arts 2020 starts tomorrow, January 17 and runs through February 24. We know many festival-goers are currently busy planning and building their must-do (and must-eat) lists, so we were able to preview a sneak peek of the new guidemap for the festival to help them plan even further. Plus, this new guidemap offers some insight into the ever-evolving EPCOT, reflecting all of the latest changes to the park’s landscape that affect both Festival offerings and park touring alike. 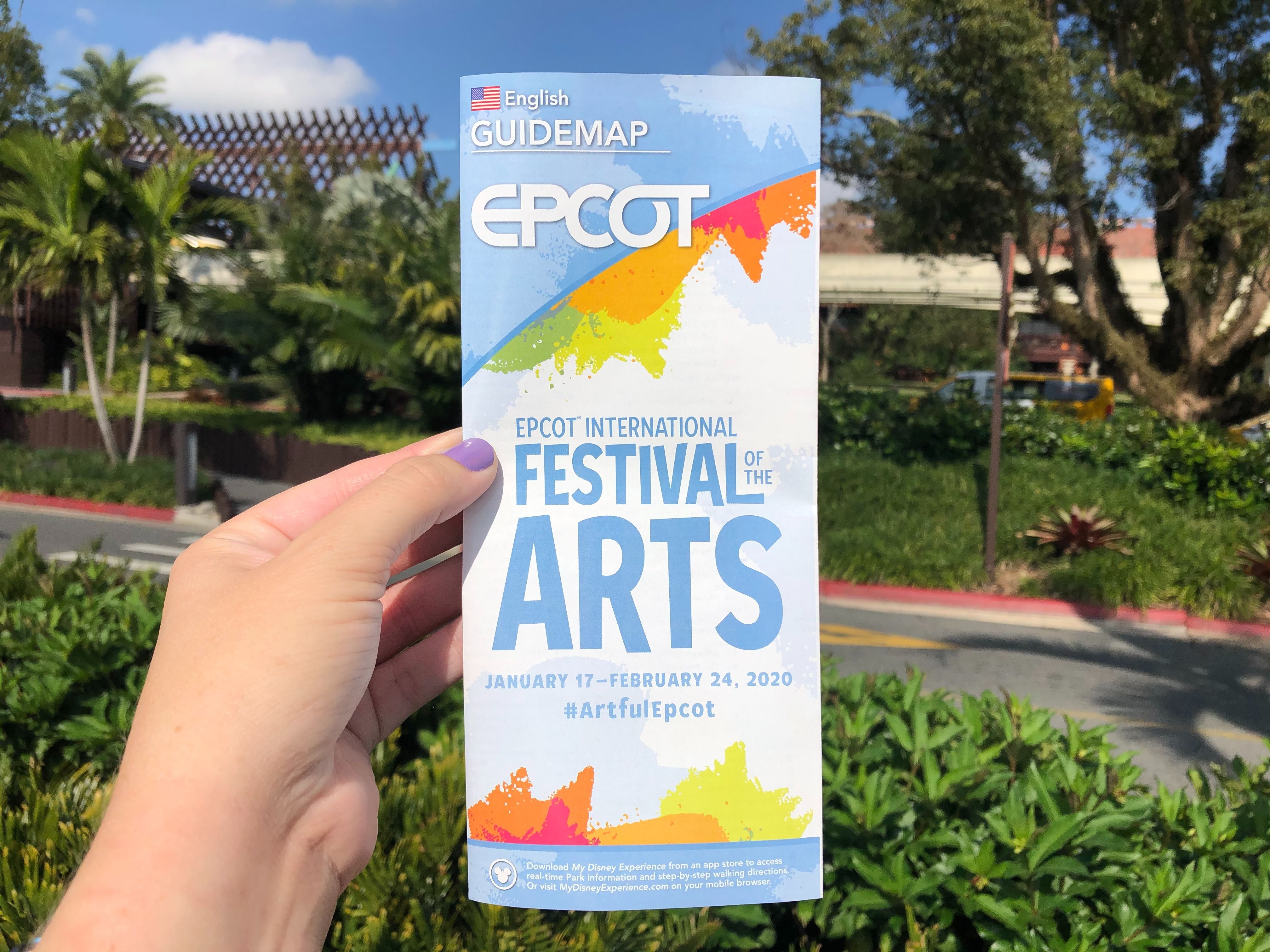 The guidemap is presented in its usual artsy style, with splotches of paint along the edges. The park encourages the use of the hashtag #ArtfulEpcot across social media. 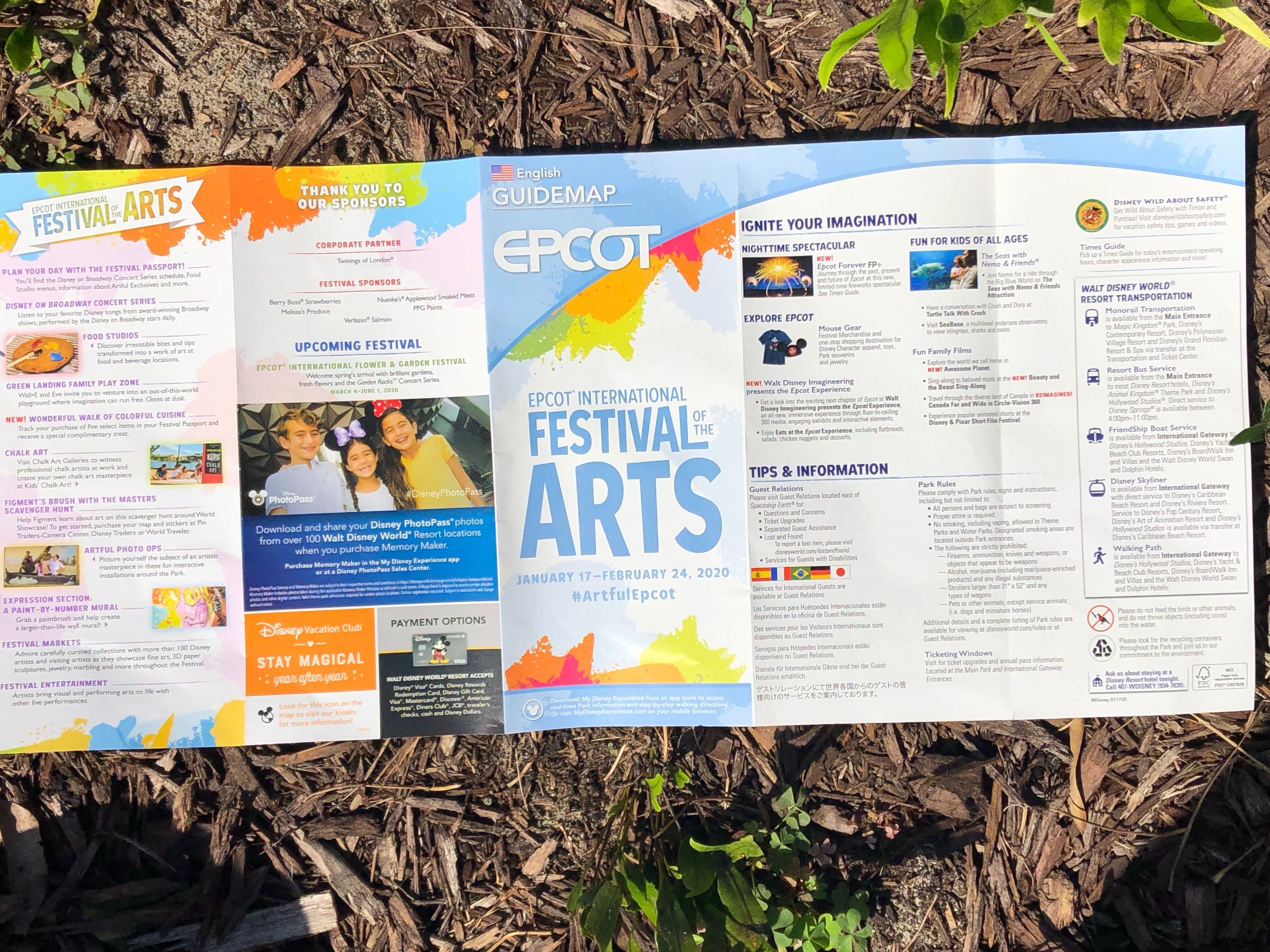 The outer cover advertises all of the fun offerings at the festival, reminding guests to pick up their Festival Passport, which contains the full Disney on Broadway concert series schedule, Food Studio menus, and more. Don’t miss out on the new Wall-E themed Green Landing Family Play Zone which recently opened up near MouseGear. Also new this year is the Wonderful Walk of Colorful Cuisine, where you can get a complimentary treat with the purchase of five select menu items from various Food Studios. Of course, Chalk Art, Figment’s Brush with the Masters Scavenger Hunt, Photo Ops, and the Paint-By-Number Mural are all returning for the festival too. 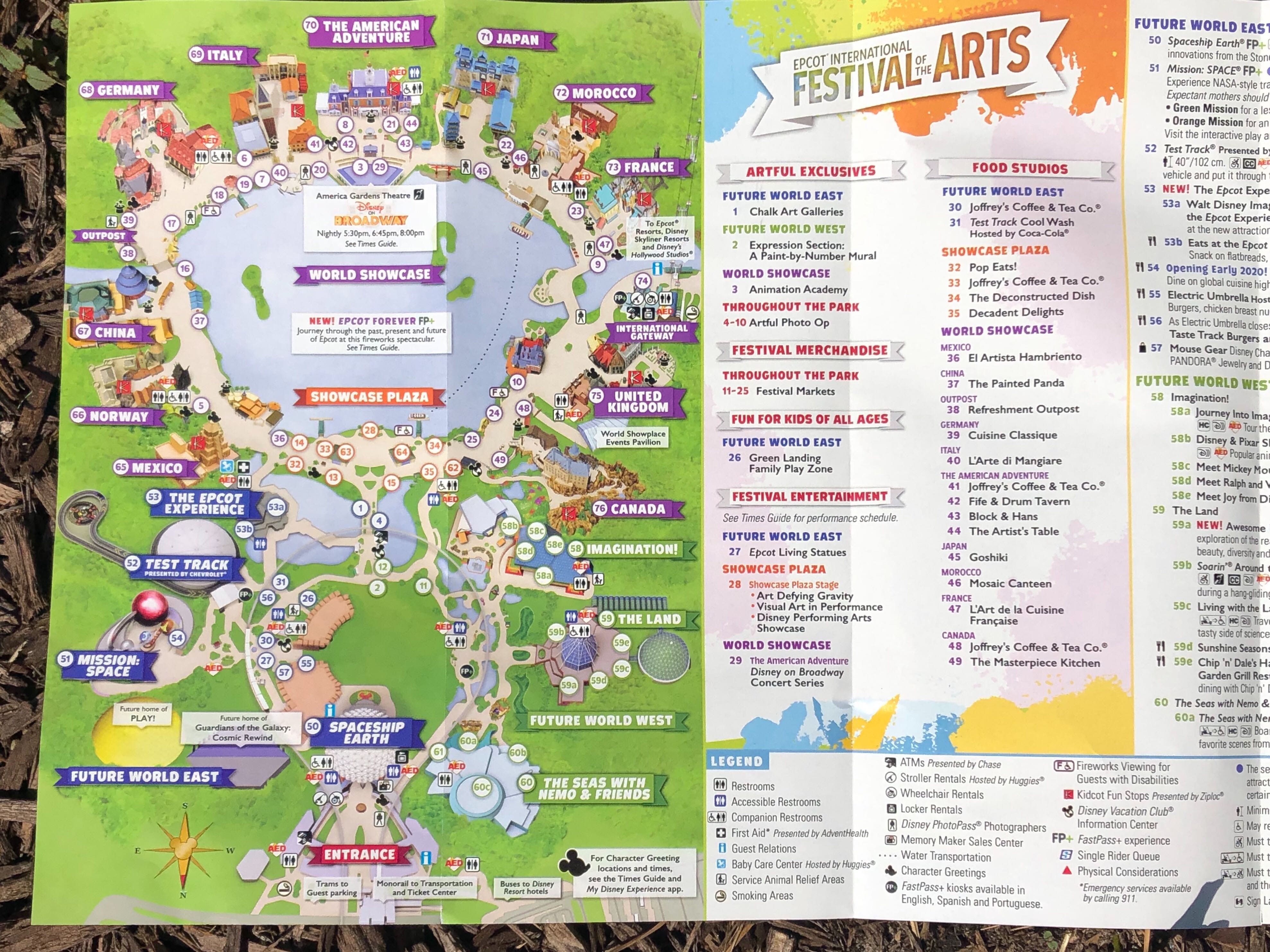 Next, we delve into the interior map and listings. Among the notable changes: The Animation Academy will now be moving to the America Gardens Theatre. Performances like Art Defying Gravity and Visual Art in Performance will now be taking place at the Showcase Plaza Stage. (These used to take place at the Fountain of Nations stage.) 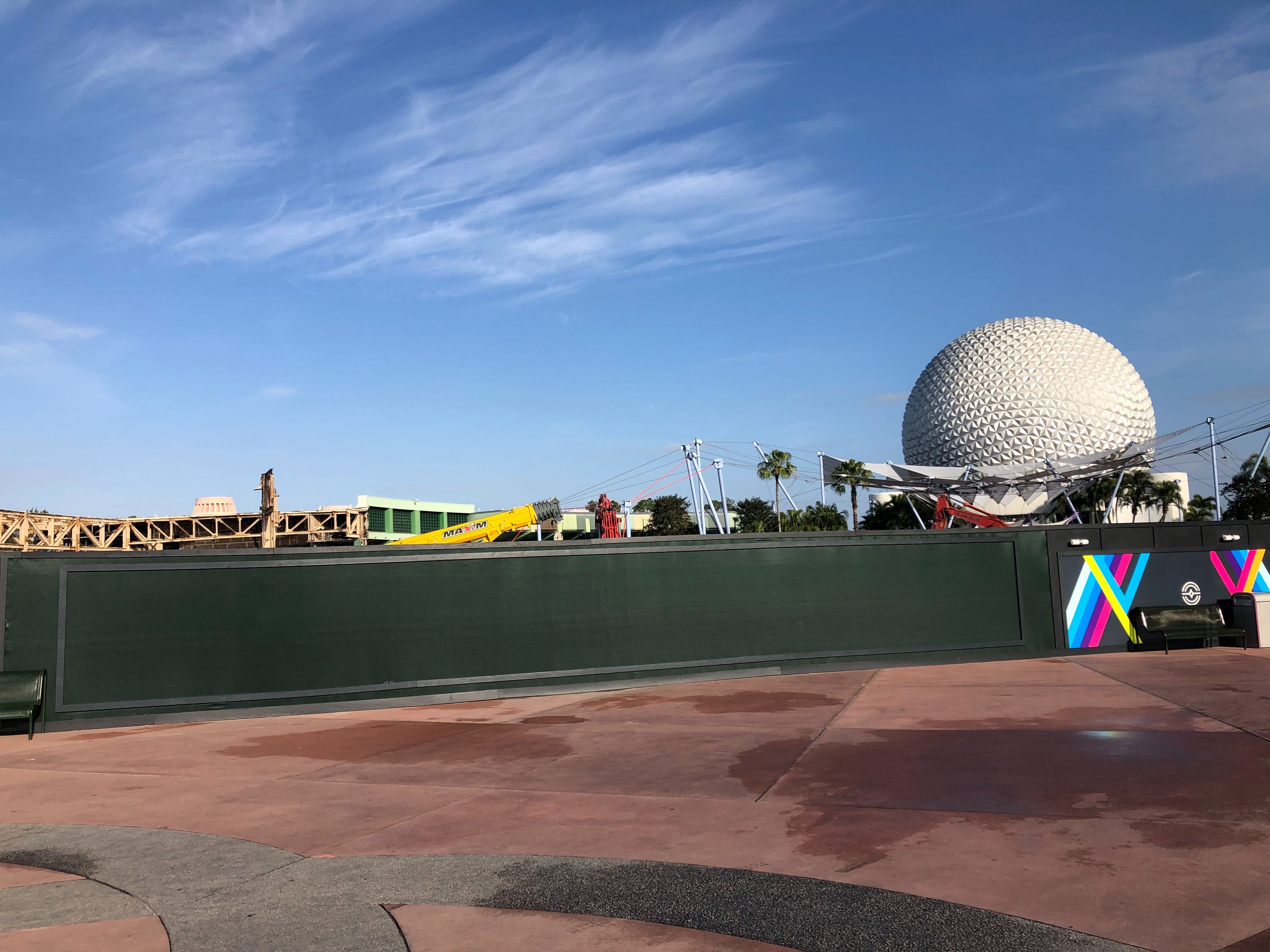 The new Paint-By-Number mural will be taking over this segment of the current Innoventions West demolition construction walls. 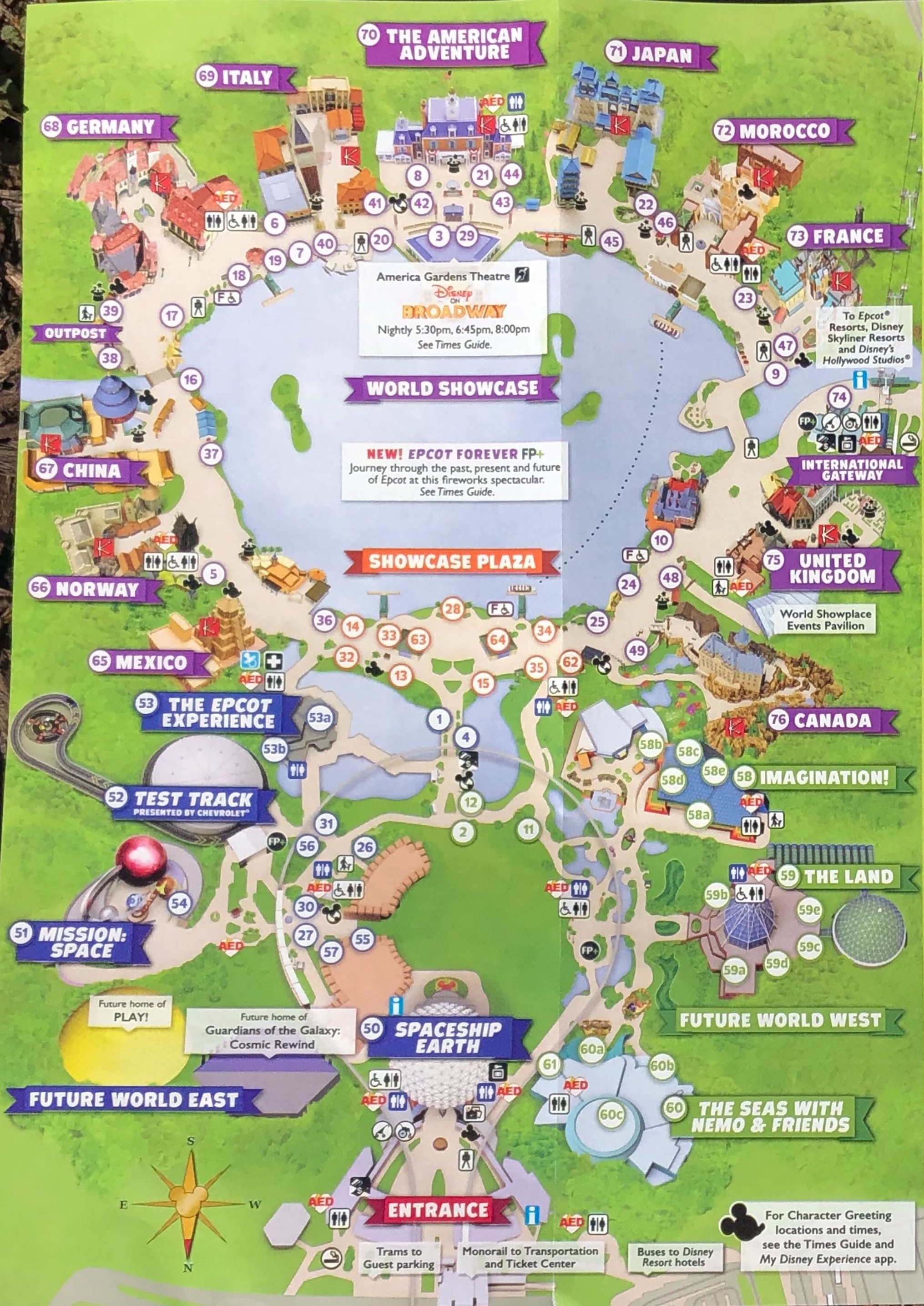 The map now reflects the latest major construction, with none of Innoventions West even showing. (It’s just this large, green expanse.) In fact, not even the Innoventions breezeway connecting Future World East and West is shown, just the new bypass walkway that leads to The Land and The Seas pavilions. 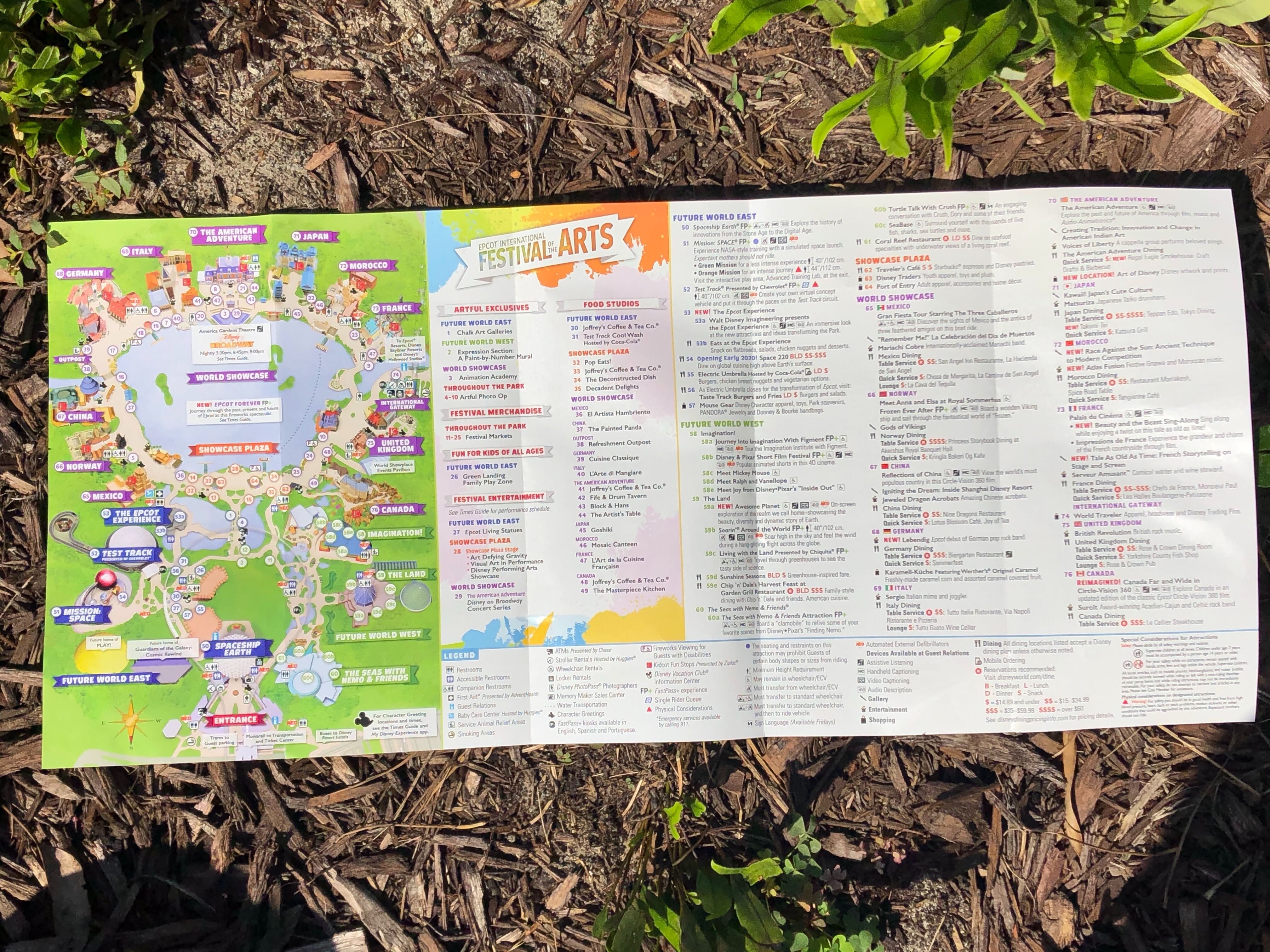 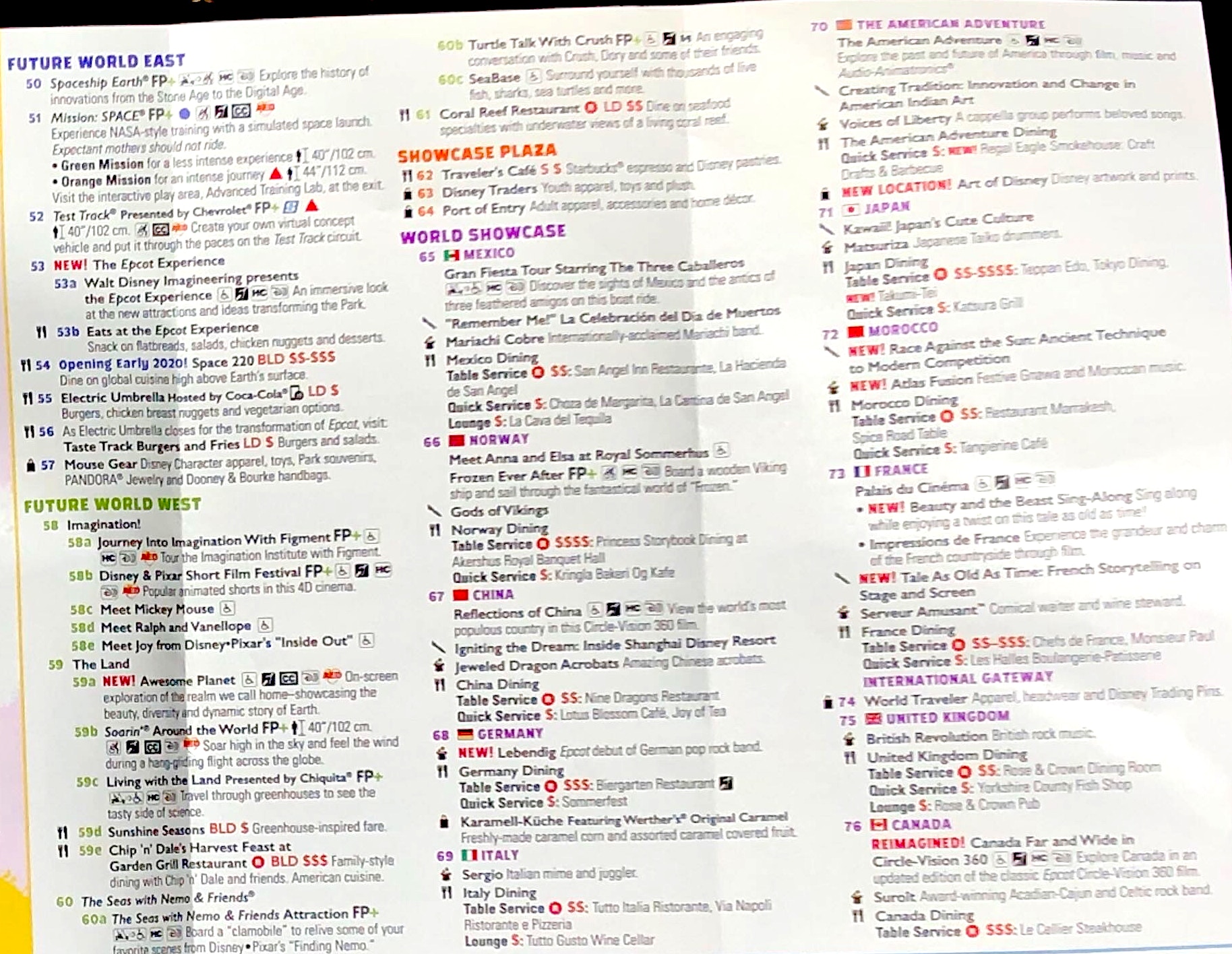 New and up-and-coming offerings also listed include Space 220, which is listed as opening “Early 2020.” Previously announced this week, Taste Track Burgers and Fries will be taking over for Electric Umbrella once it closes for major remodeling. The new Mickey Mouse and Joy meet and greets now at Imagination! are listed, as is Awesome Planet in The Land. Over by Showcase Plaza, you have the new temporary Traveler’s Cafe Starbucks. If you’ve been wondering about Regal Eagle Smokehouse, it’s listed under The American Adventure with no opening date. (Given that construction is still underway at the location, it’d be a stretch to assume this implies it’ll be open by the start of the Festival.)

Finally, in the France Pavilion you have the new Beauty and the Beast Sing-Along, Impressions de France now in 4K, and a new exhibit inside the Palais du Cinema pre-show room titled “Tale As Old As Time: French Storytelling on Stage and Screen.” In the Canada Pavilion, you have the newly reimagined Canada Far and Wide in Circle-Vision 3D.