Progress keeps on coming with the New Fantasyland expansion at Tokyo Disneyland! We’re just two and a half months away from opening, can you believe it? And some pretty significant details have been added since the last time we checked in. Construction is starting to wrap up here in Tokyo, so there’s a few surprises in New Fantasyland for us. So without further ado, let’s explore the latest additions to Belle’s Village and the world around it! If you want to take a video tour, you can check it out below. Otherwise, keep on scrolling for pictures and descriptions! 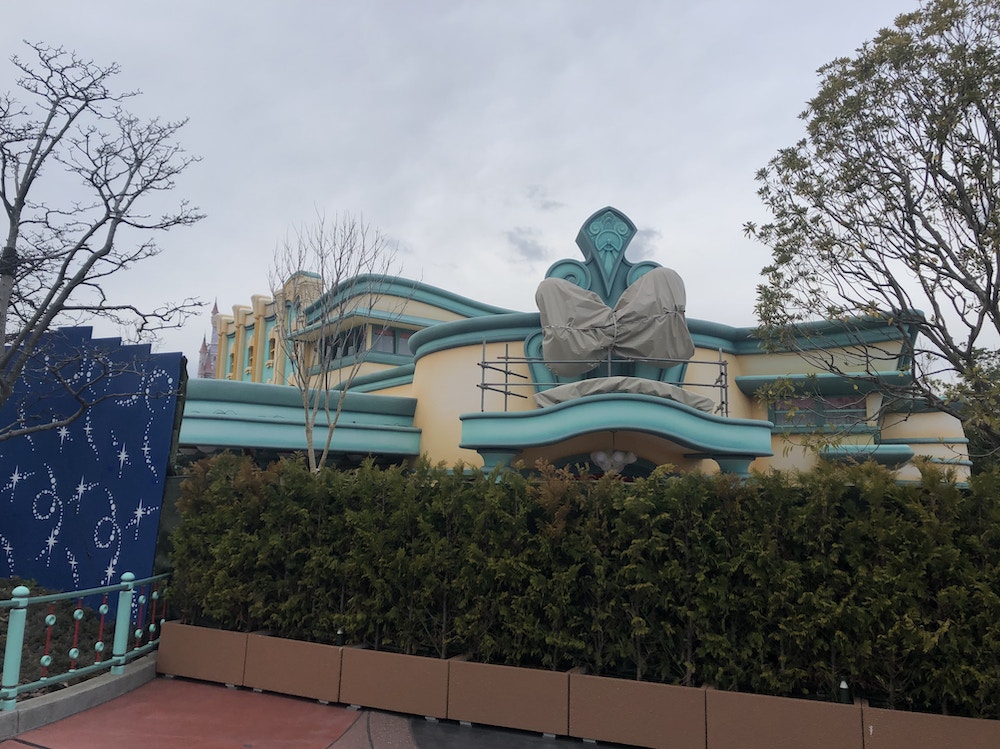 There’s not a whole lot new here at Minnie’s Style Studio. The construction is just about done, and most work outside appears to be vegetation and other finishing touches. 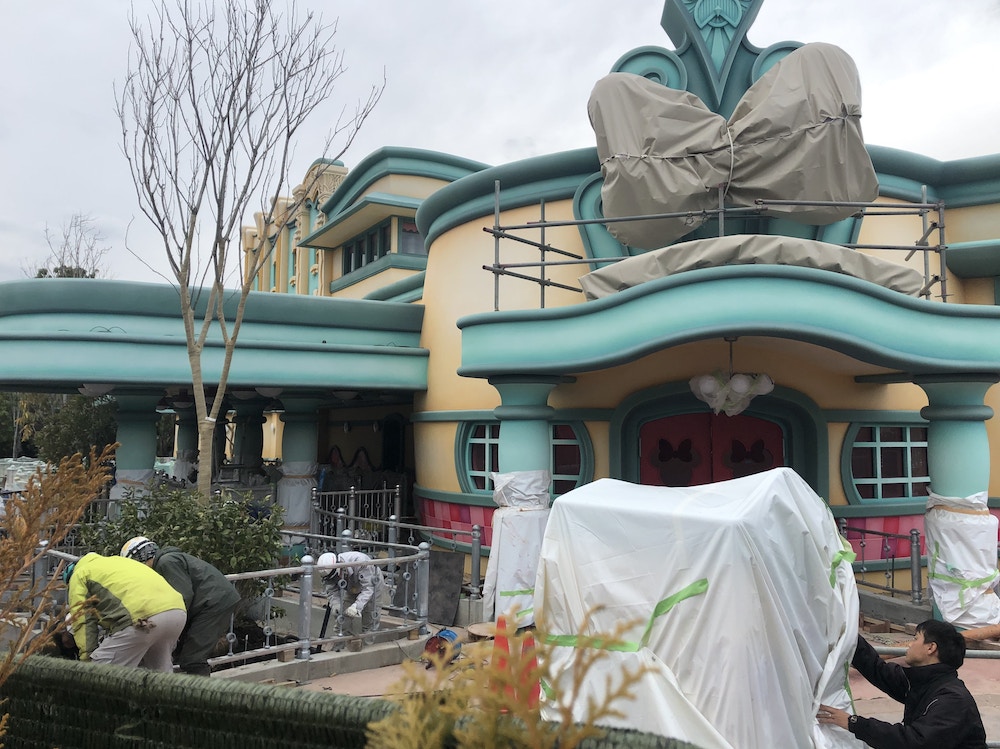 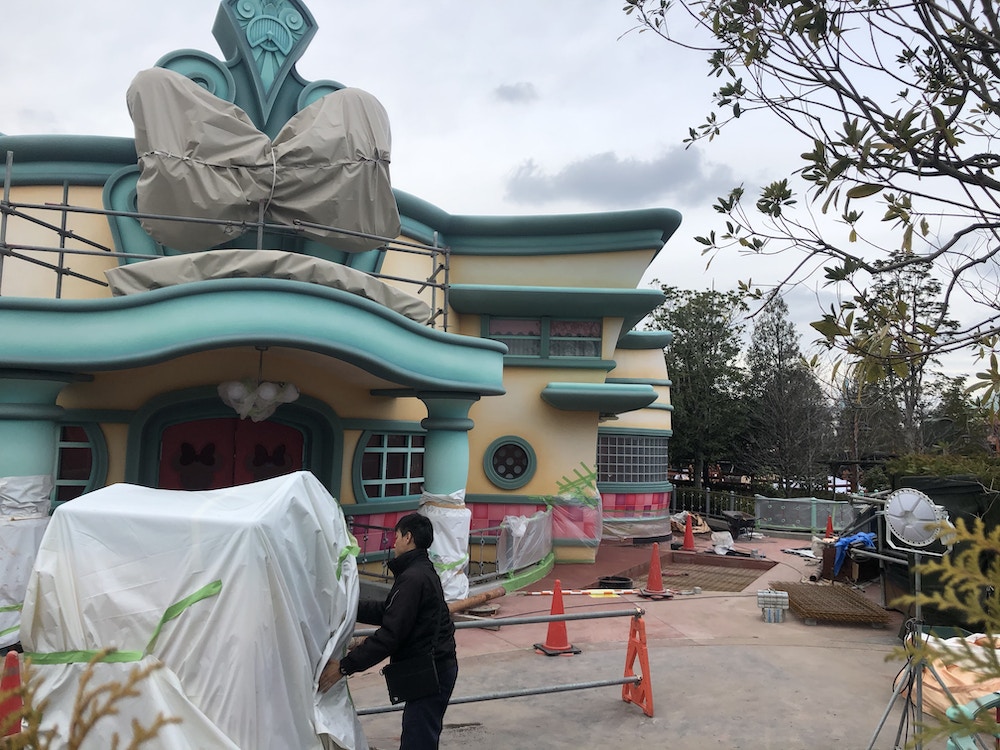 When we visited this week, we managed to catch crews chugging away to get this place fit for the mouse herself! There’s some more work to be done on pavement this side, it looks like. But it shouldn’t be too long before it’s perfect! 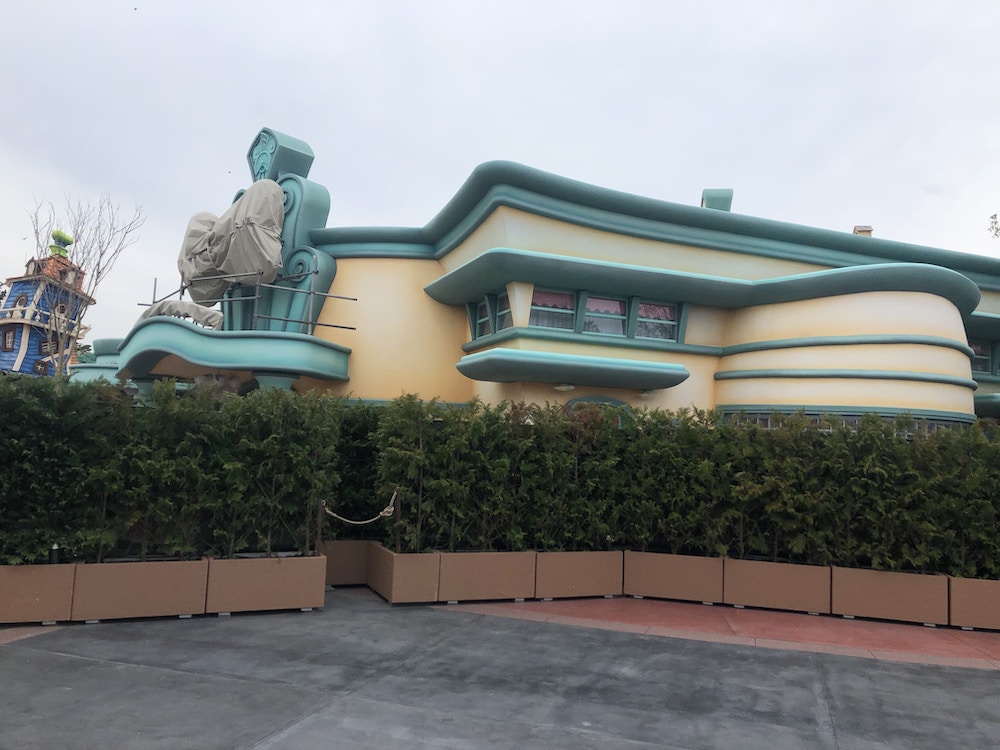 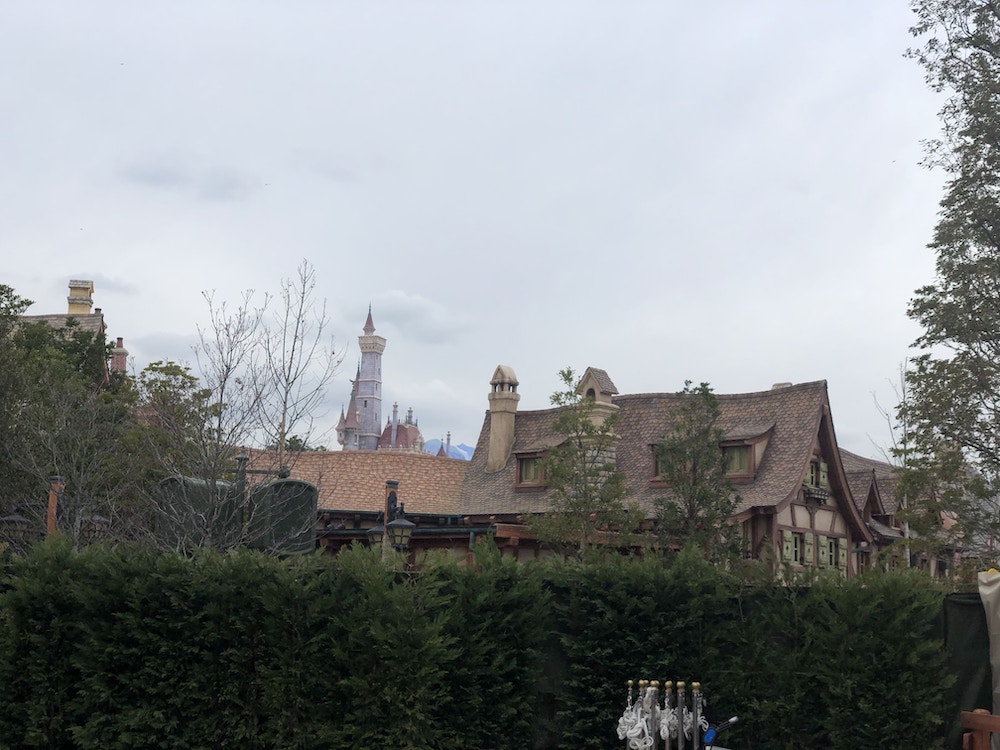 Most of the exterior work on Maurice’s House finished several months ago. 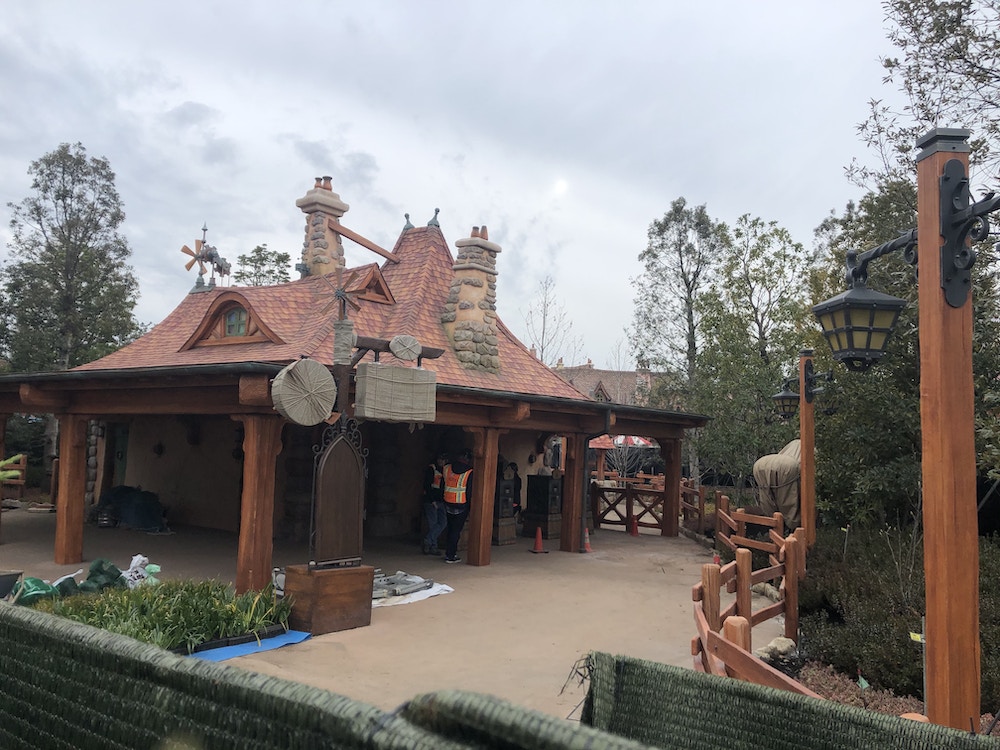 But taking a peek over the planters reveals the installed safety and wait signage. There’s also uncovered FastPass machines! But this is the closest shot we could get. These will probably be out every day for all of a few minutes, like the gorgeous Soaring: Fantastic Flight machines at Tokyo DisneySea. 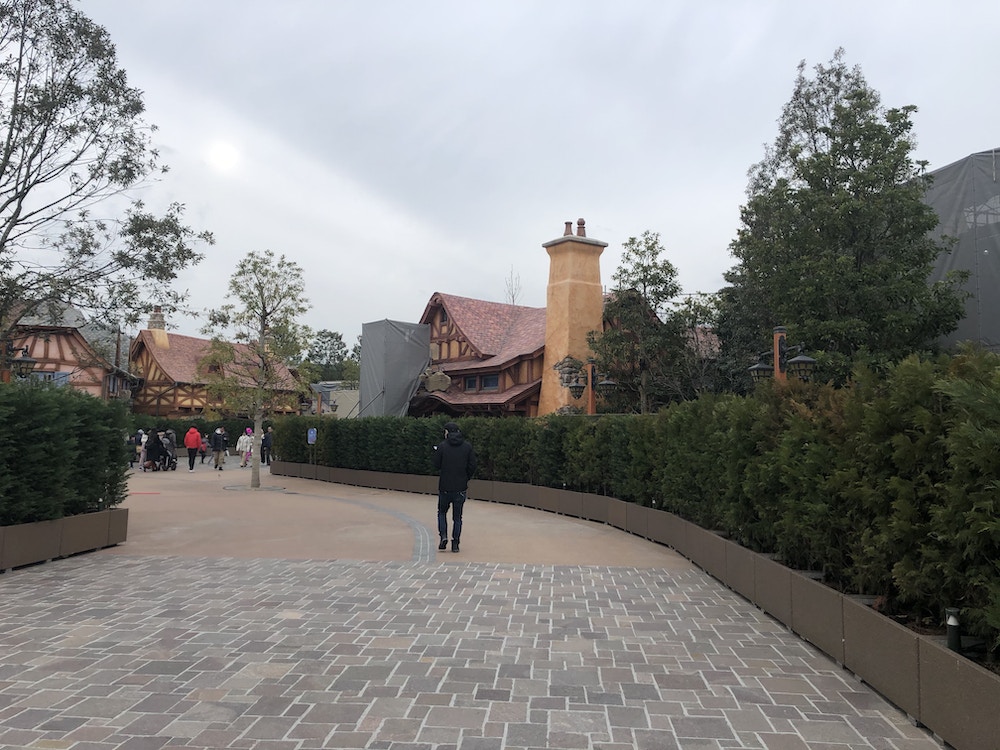 This area hasn’t changed much this week, but it’s still a relatively new view for those that didn’t catch our last update. 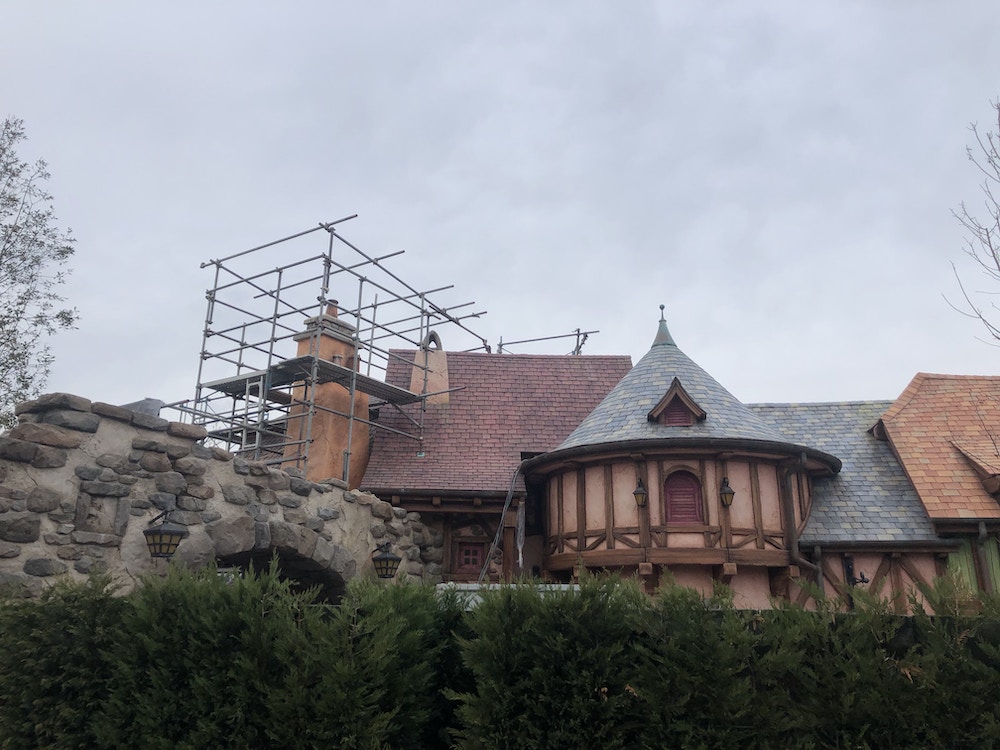 These scaffolds are also on their way down, as they’ve been for a couple weeks. It’s so exciting to see new features being revealed for Belle’s Village! 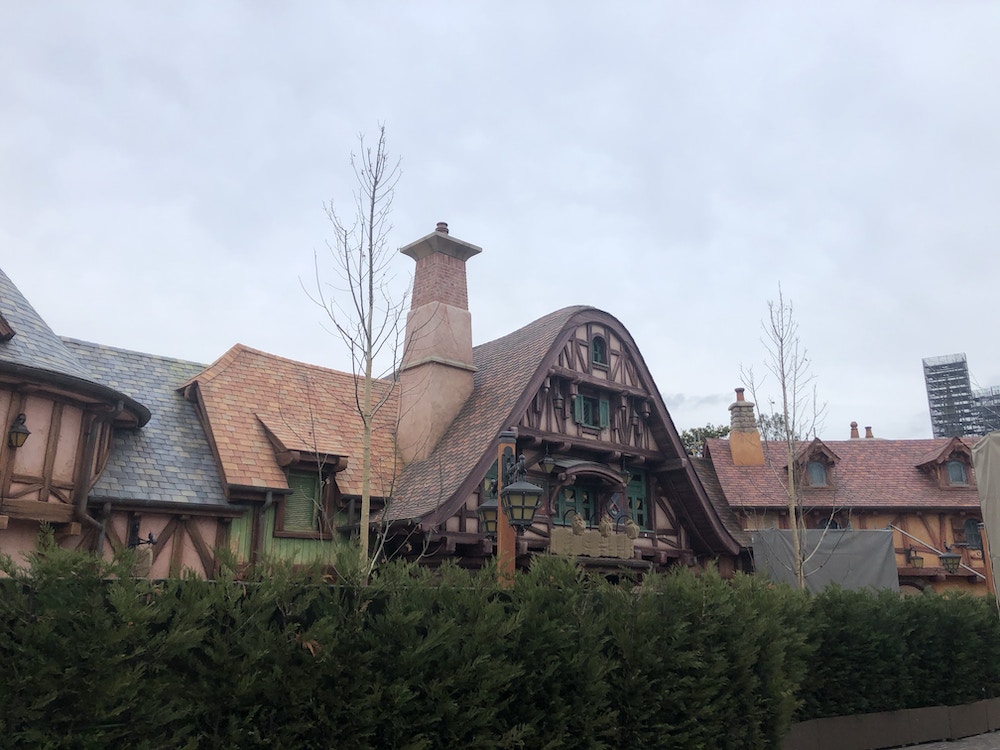 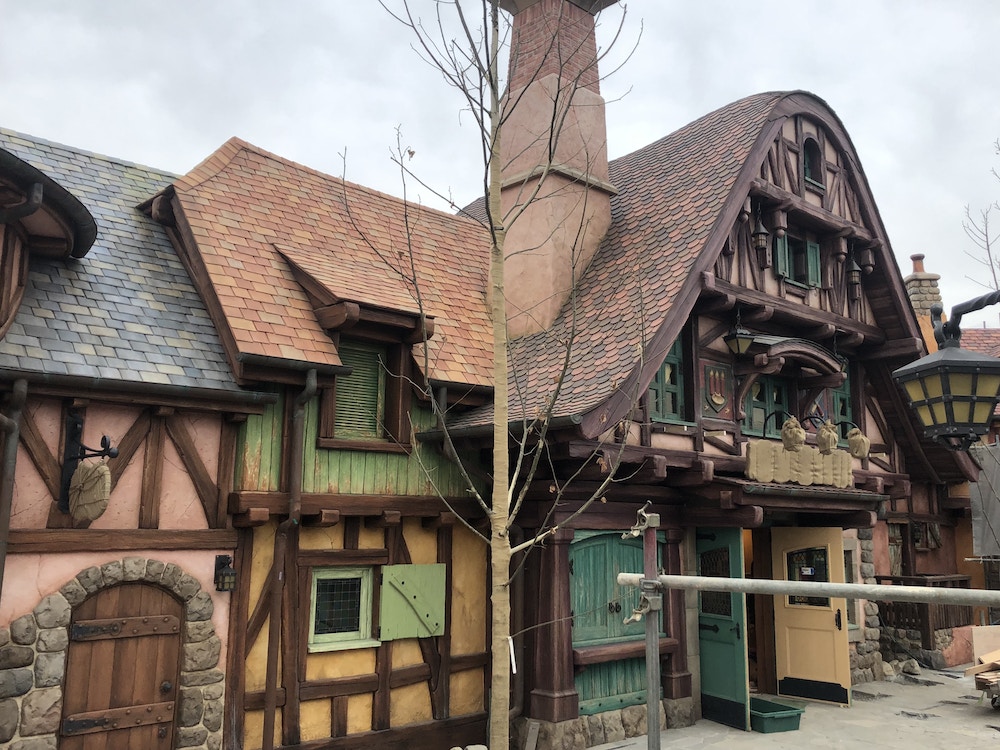 The scaffolds around the Village Shops are on their way down as well. This entire area was a brand new reveal, and it looks fantastic! Looking through those open doors didn’t reveal anything substantial, however. 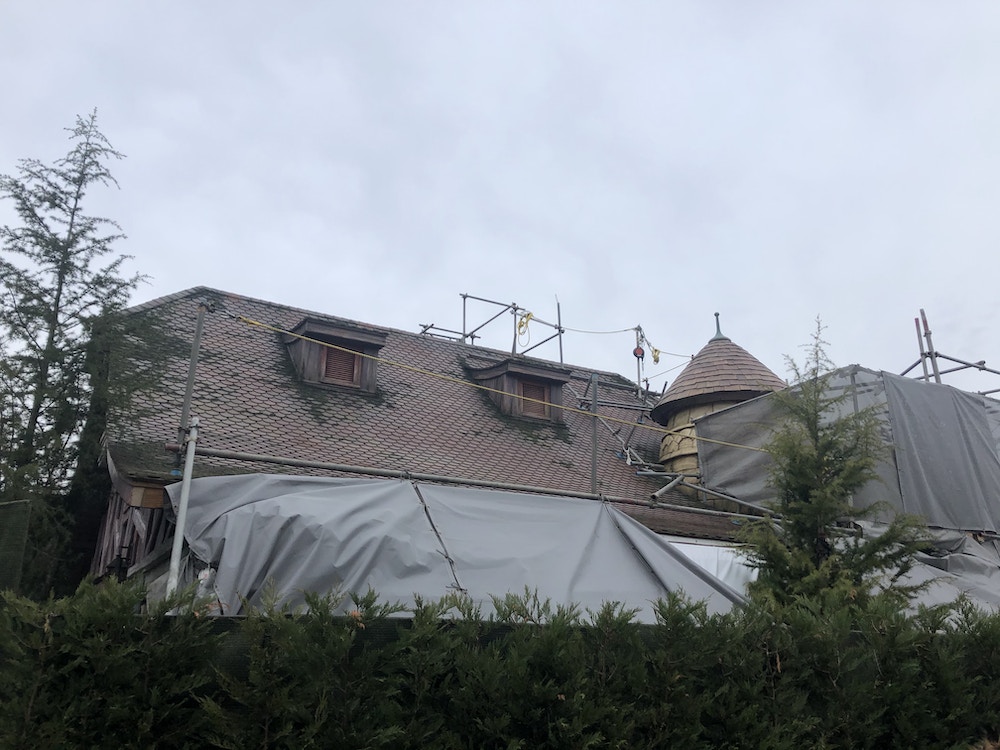 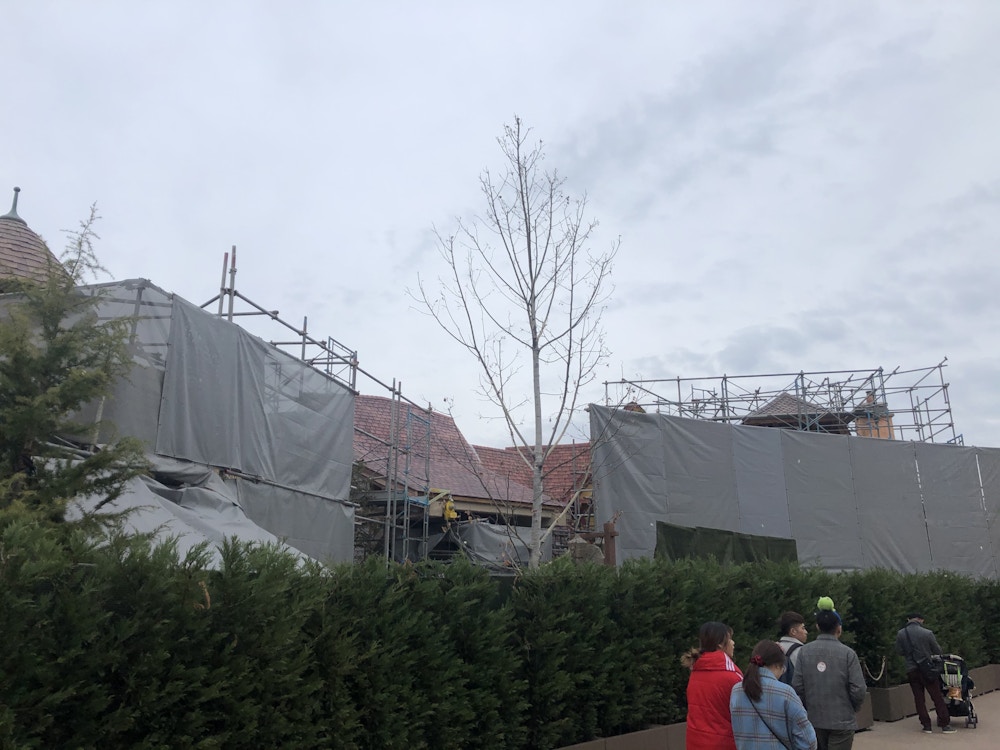 The Enchanted Tale of Beauty and the Beast 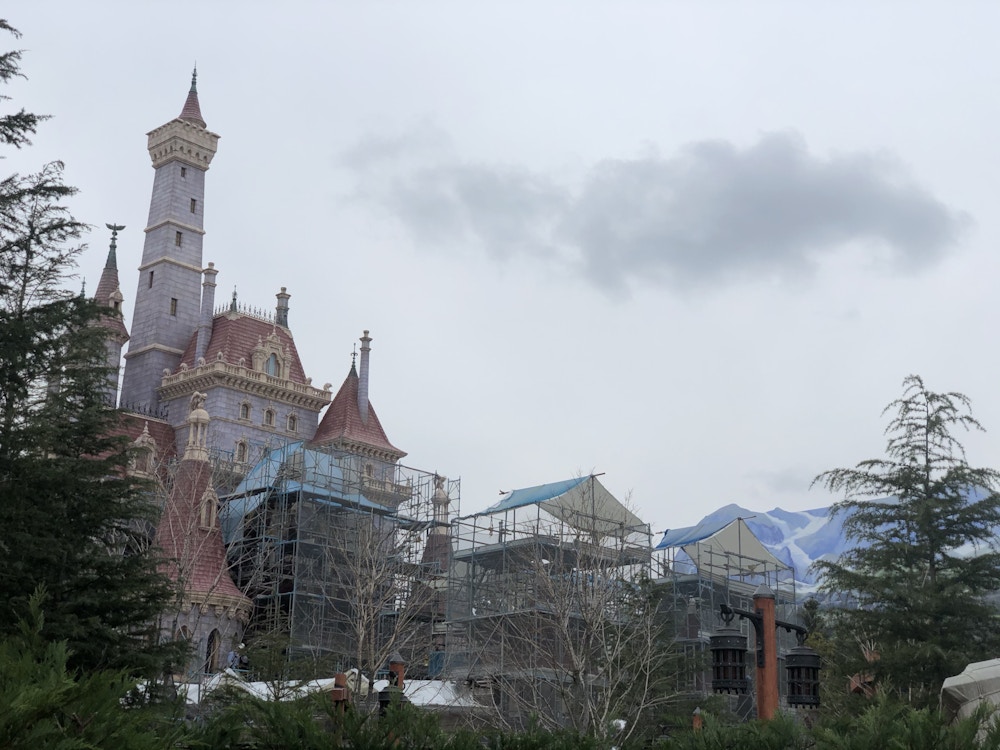 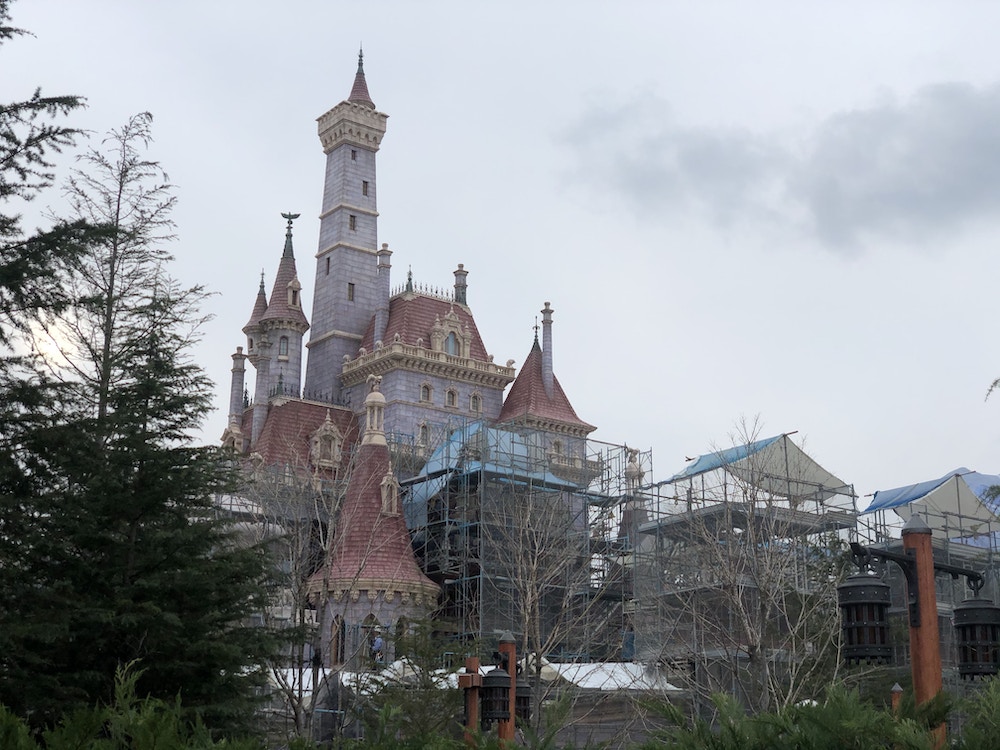 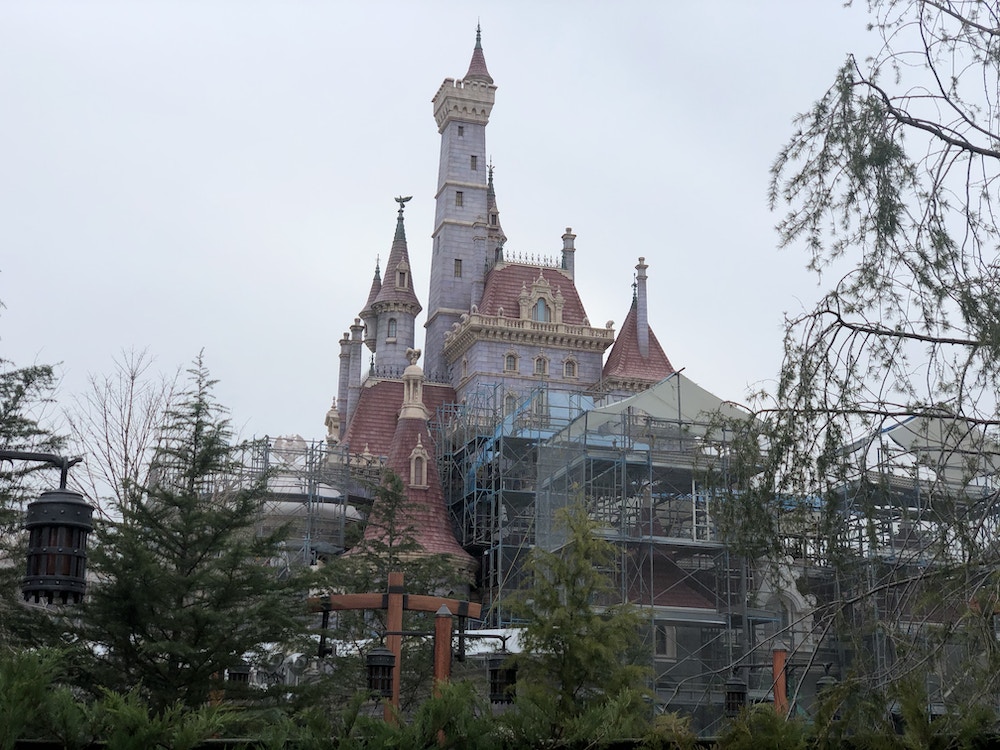 Around the castle, the scaffolding hasn’t budged too much these past couple of weeks. Most of the Beast’s Castle is now in the open for Guests to see, and it looks absolutely majestic. Photos really don’t do this thing justice. 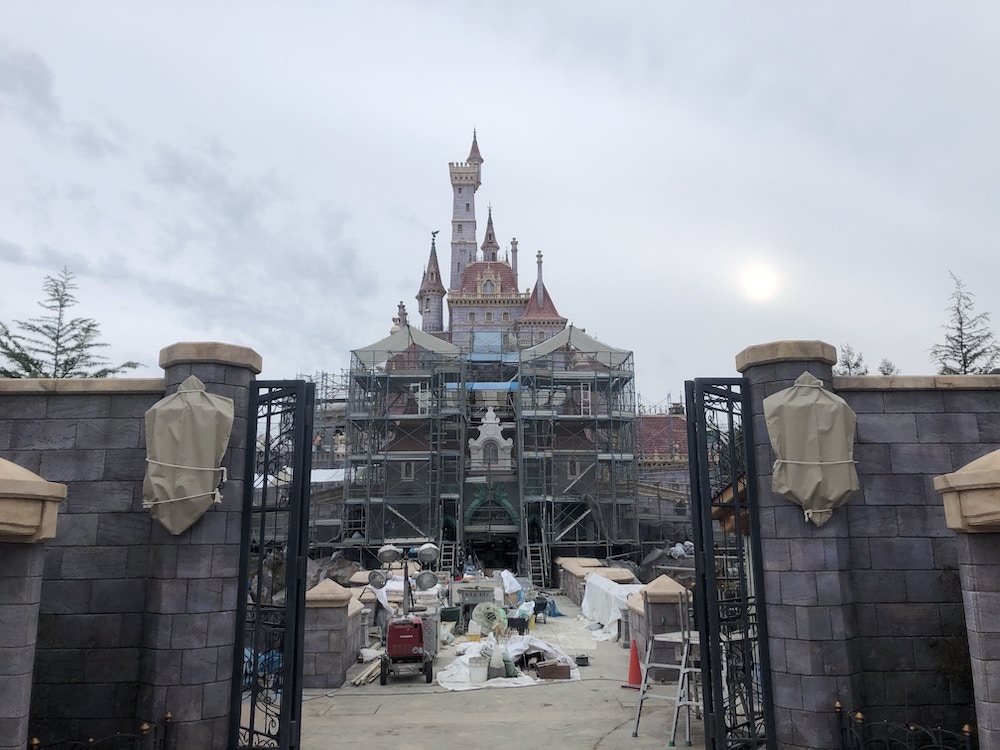 And a peek over the planters reveals a dead-ahead look at the attraction entrance. Crews are still hard at work finishing things up inside and out! Like I said, we’re only two and a half months away from the grand opening on April 15th! 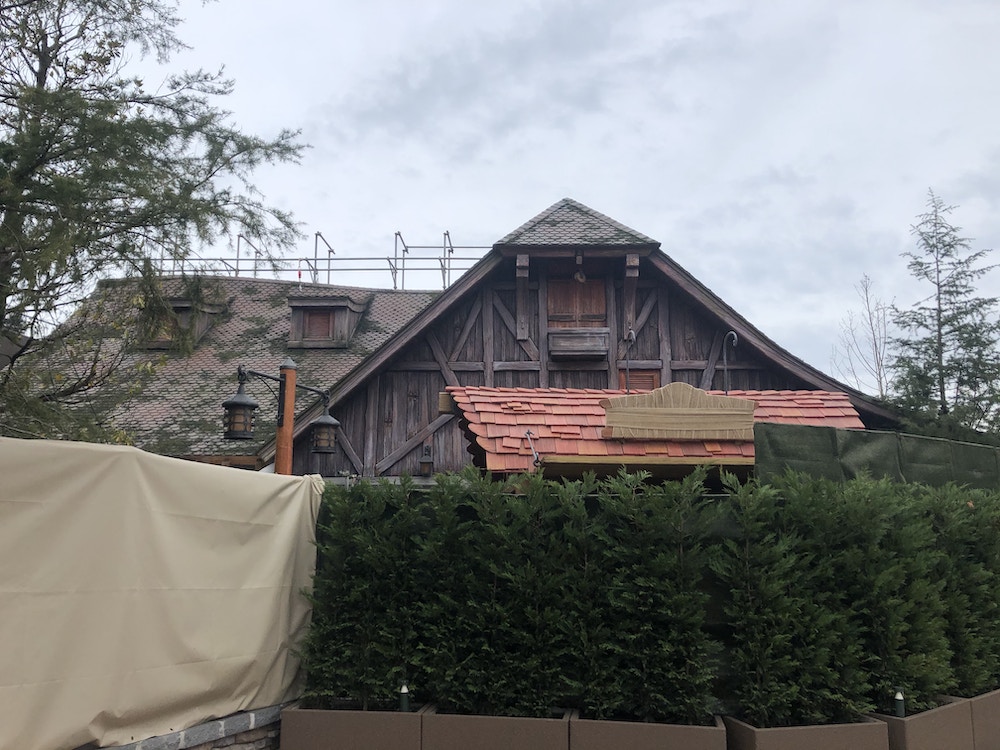 The popcorn cart across from the entrance was installed this week. The flavor is unknown at present. I hope it’s something new, and not more caramel popcorn. 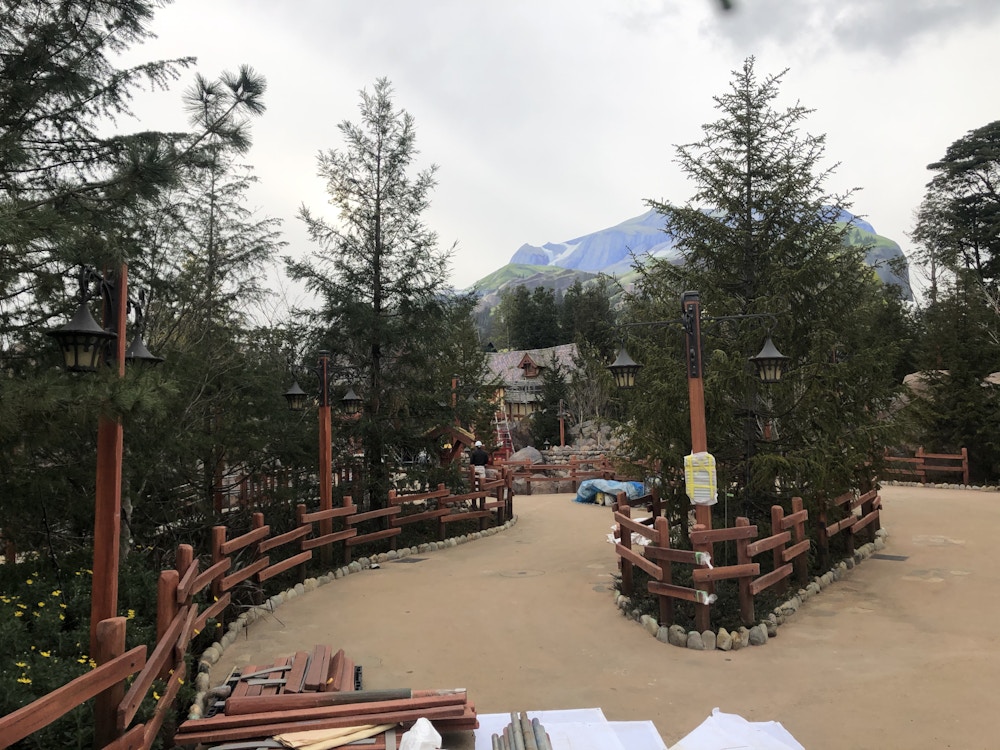 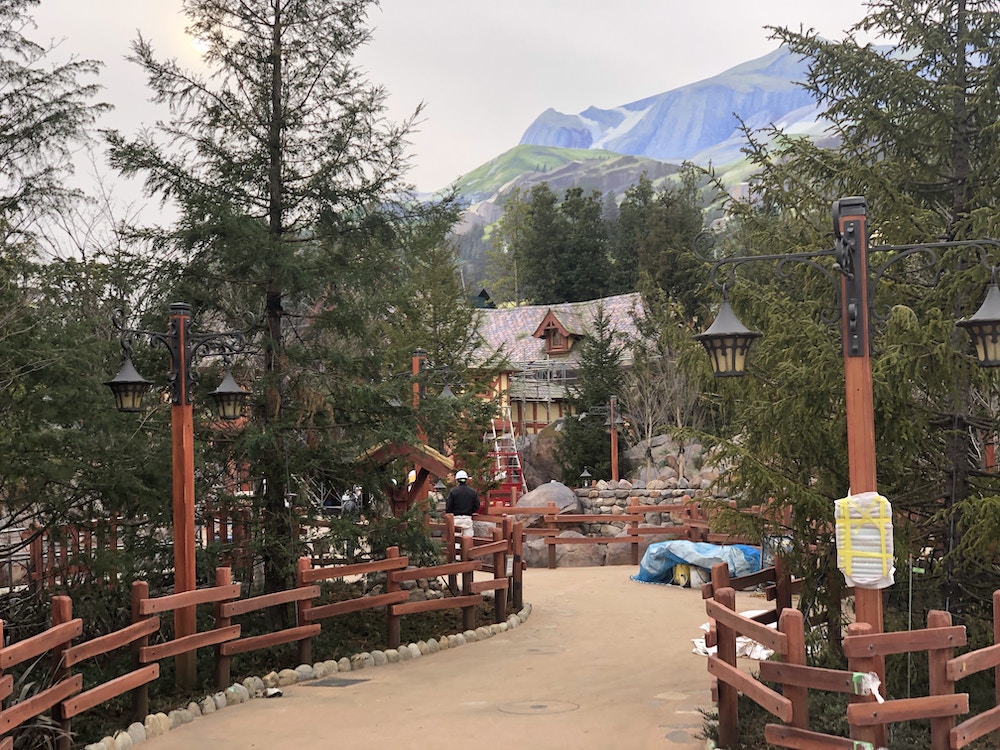 The trees on the path make it difficult to check up on construction of the theater. It appears that more scaffolding is down, and it lights up at night now. It’s really quite a sight to behold! 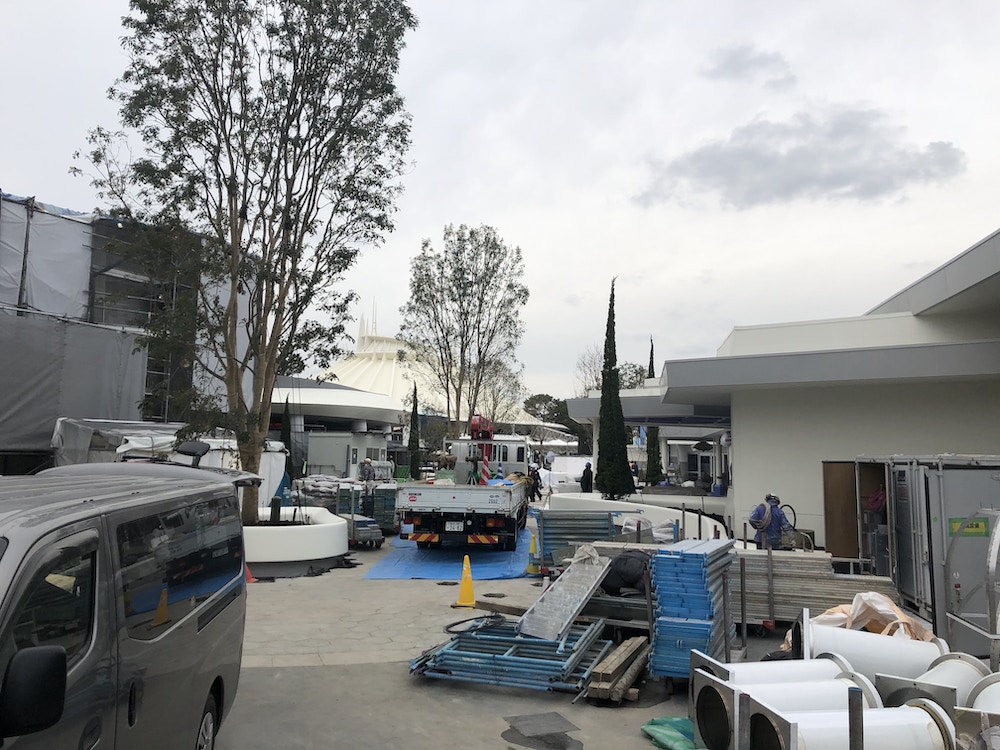 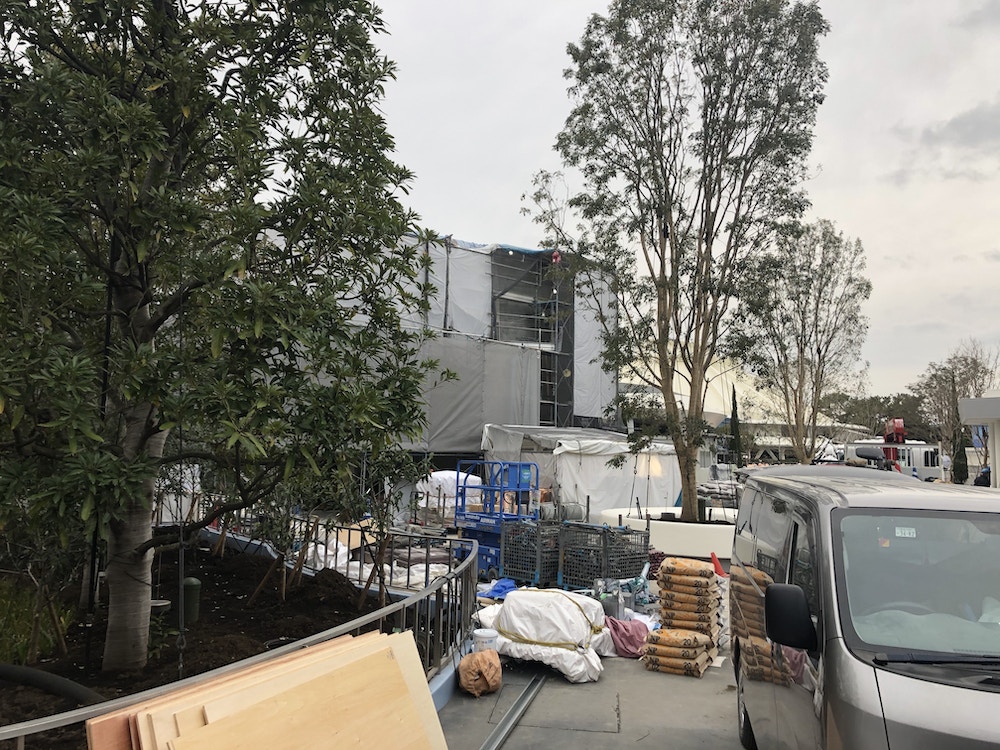 From the Fantasyland side, a fairly significant amount of work is still ongoing around Tomorrowland Terrace and The Big Pop. The latter is one of the last structures still covered with scaffolding. 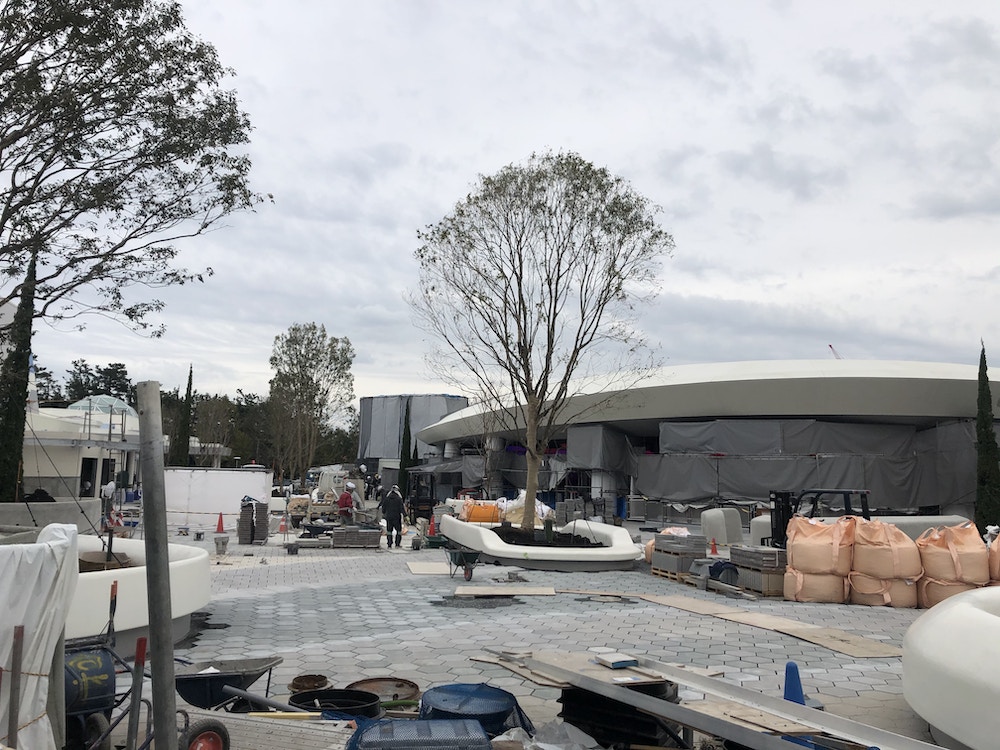 On the side facing Tomorrowland, most of the pavement work appears to be done. And work is still ongoing on The Happy Ride with Baymax. 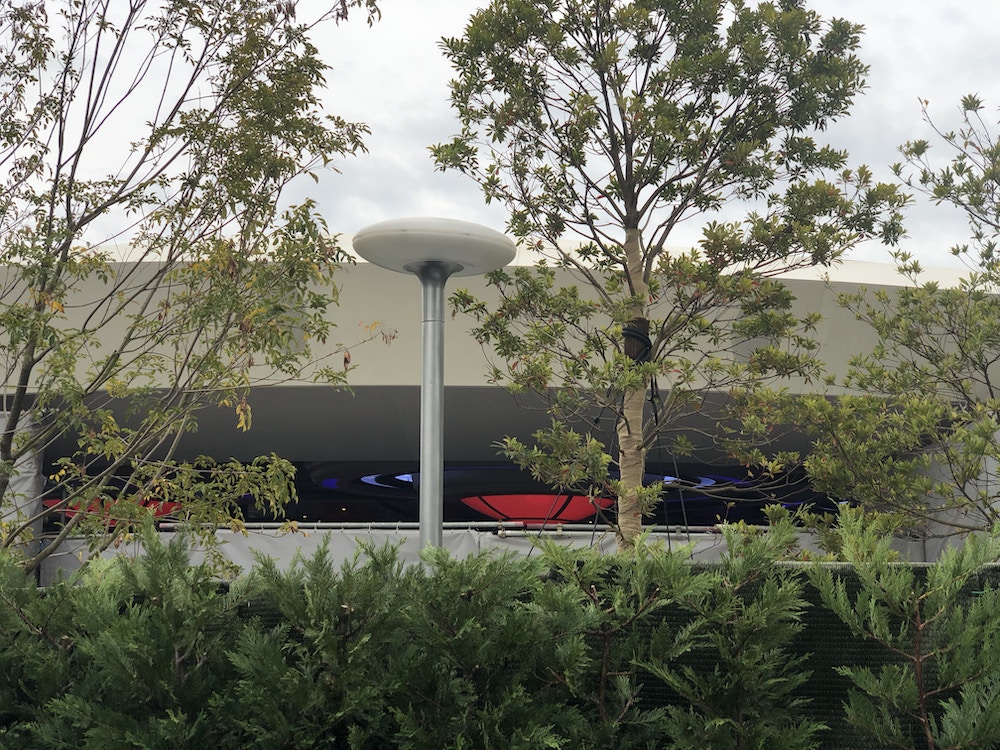 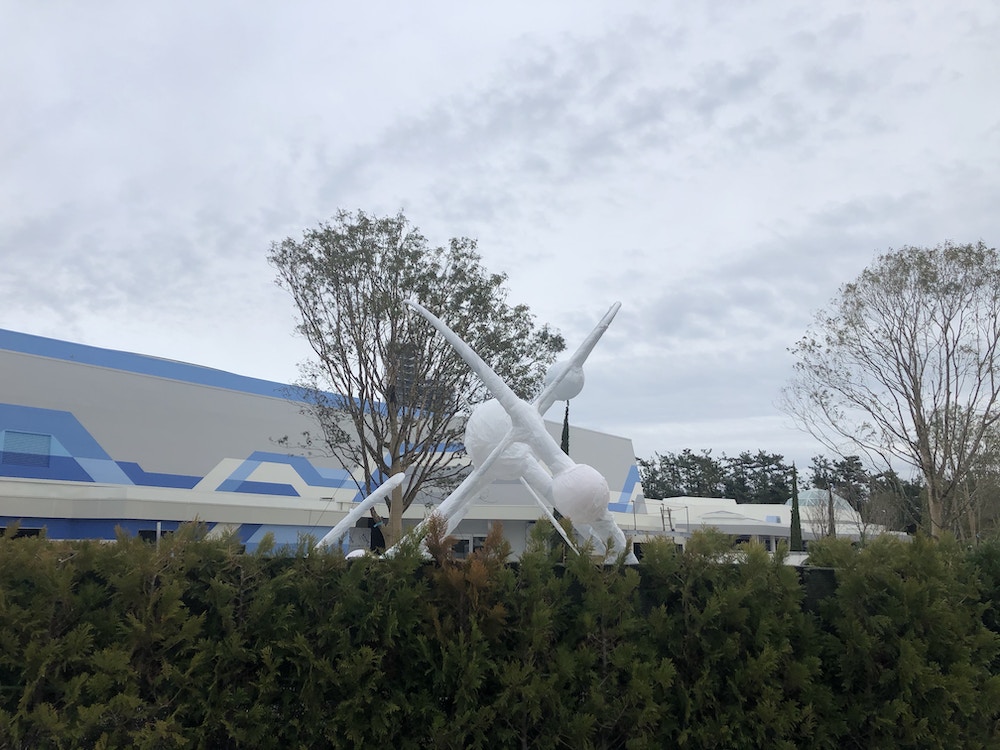 And what’s this? This is brand new, and appears to be another land identifier, reminiscent of the old Tomorrowland icon from the Disneyland TV series. I don’t remember seeing this in any concept art, so I’m excited to see what it looks like unwrapped! 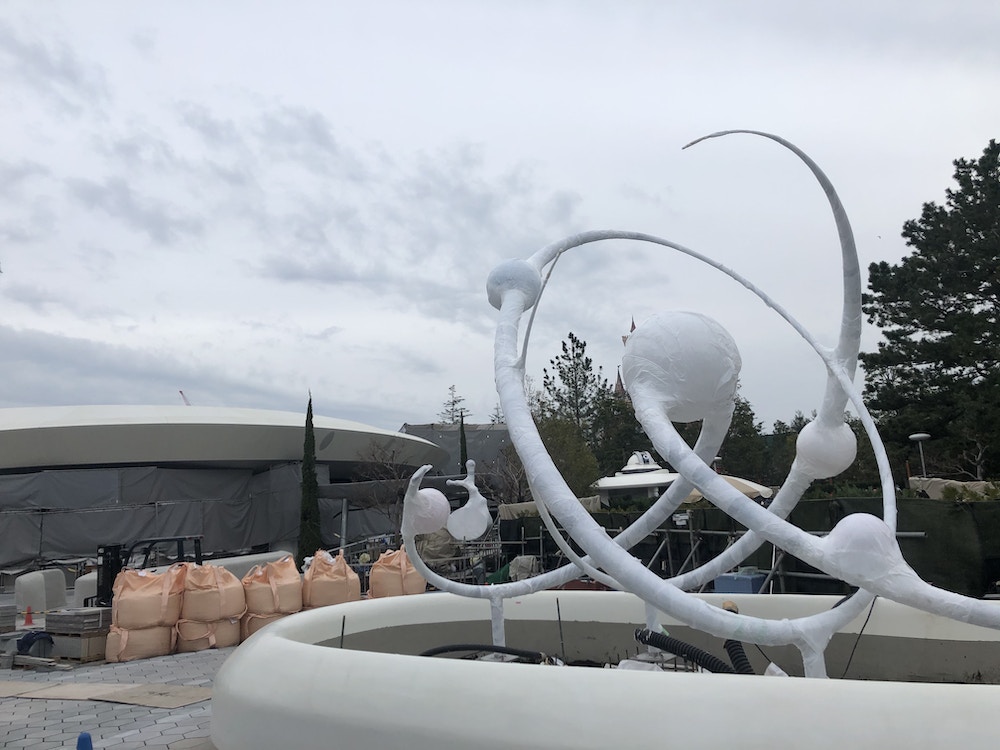 Taking a peek over the planter, we can get a clearer look at the structure. I honestly can’t tell if this will be a fountain or a planter. But I’d put my money on the former. I’m sure we’ll see more progress on this in the next few weeks. 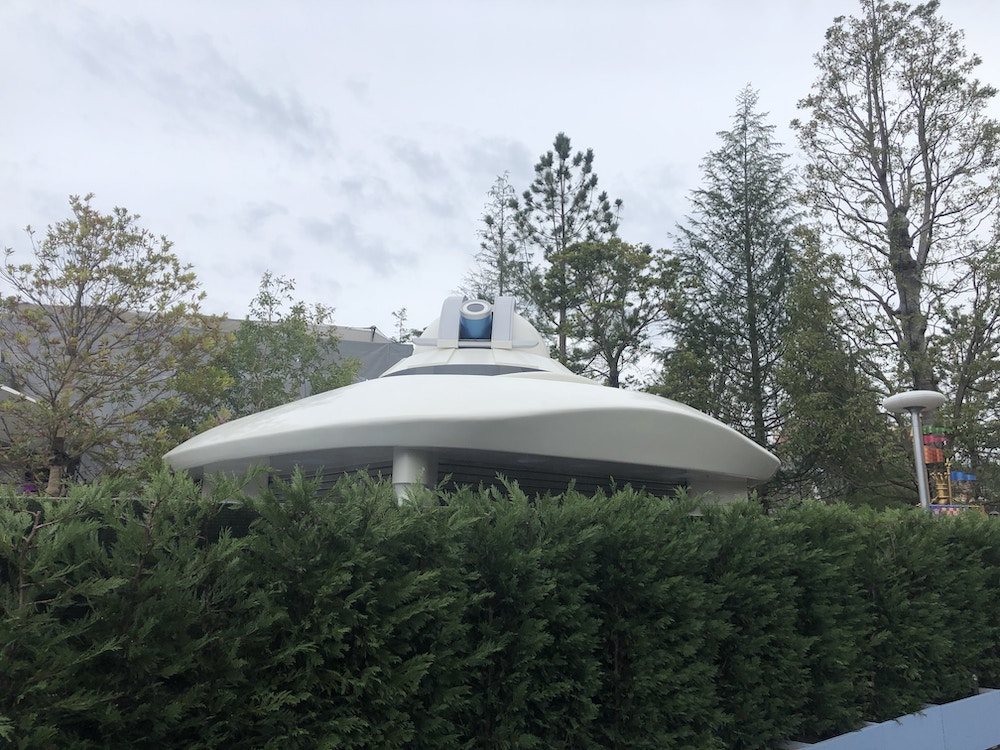 Also installed this week was this gift stand. This one will likely sell Baymax-related merchandise. 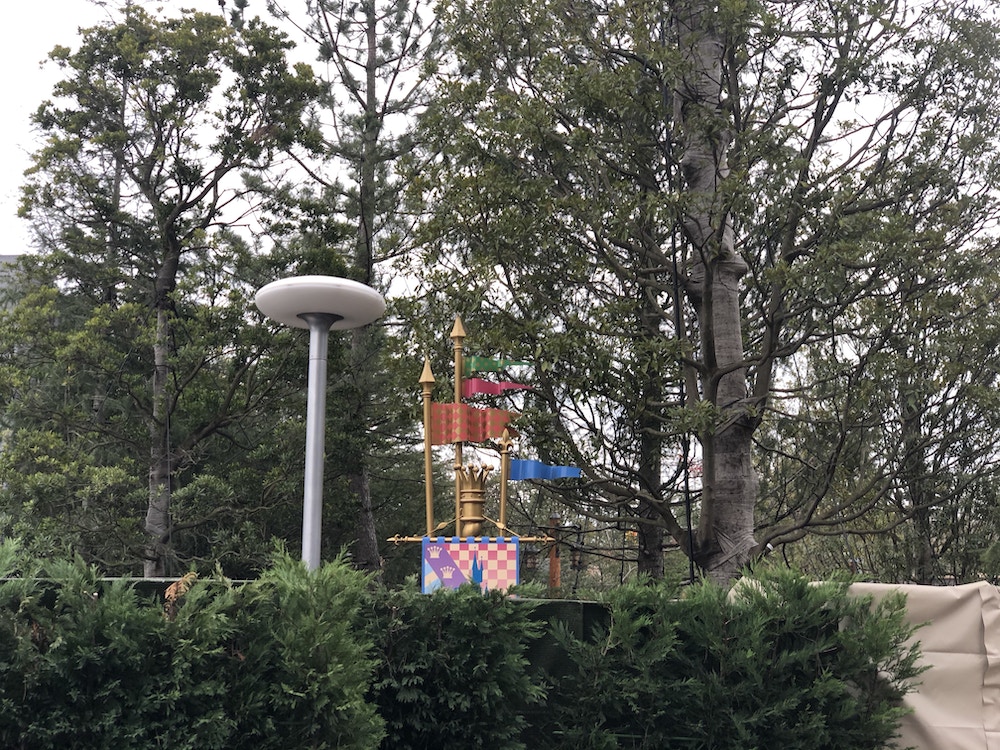 And on the edge of the land transition, the Fantasyland sign has been moved from across from Pooh’s Hunny Hunt to here.

And that’s the latest news from Tokyo Disneyland’s New Fantasyland expansion! With opening day in 85 days, it’s go time for these crews! I’m so excited to journey through the world of Beauty and the Beast, experience Mickey’s Magical Music World, and dine at La Taverne de Gaston! It’s only a matter of time. Are you excited for New Fantasyland at Tokyo Disneyland? Are you coming to Tokyo in 2020 or 2021? Let us know below or on Twitter!

Next
PHOTOS: Construction Walls Up Around King Arthur Carrousel for Extended Refurbishment at Disneyland