With Disney Parks around the world closed for the foreseeable future, WDWNT is dipping into our archives of vintage materials for a look back into Disney history! We’re heading back in time to see Walt Disney Productions in the early 1970’s with the first part of the 1973 Annual Report, featuring a celebration of the company’s 50th anniversary and a look at one of its newest jewels in the crown: Walt Disney World! 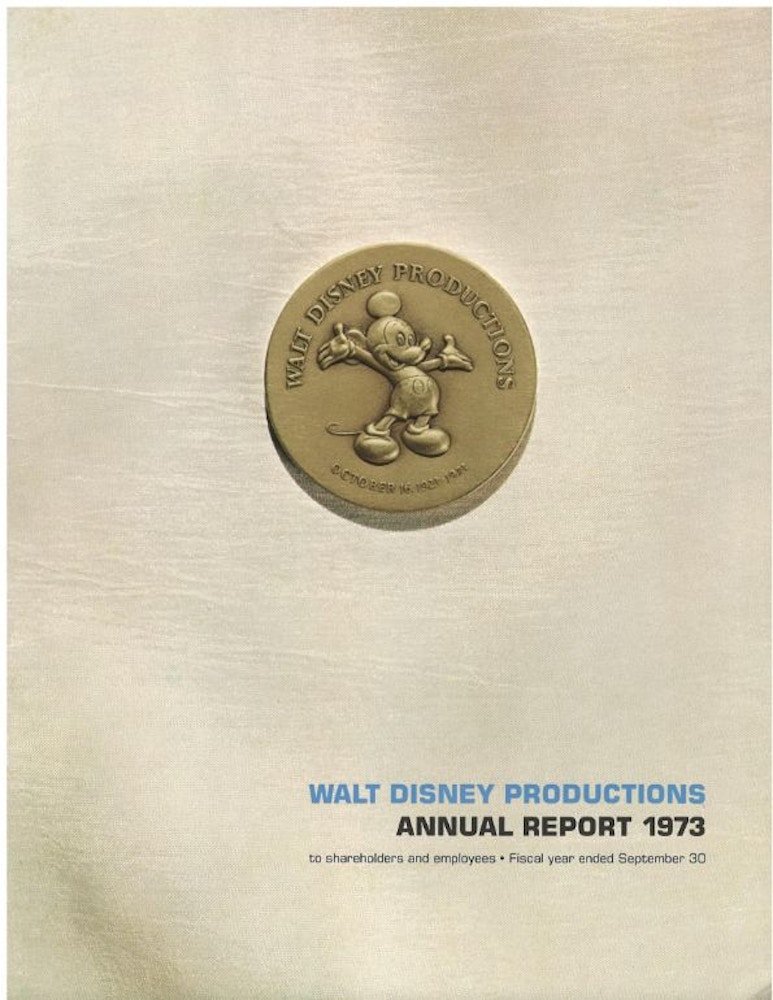 The front cover features a medal created to mark the company’s fiftieth anniversary in 1973, which was given to all permanent employees working for Disney at the time. 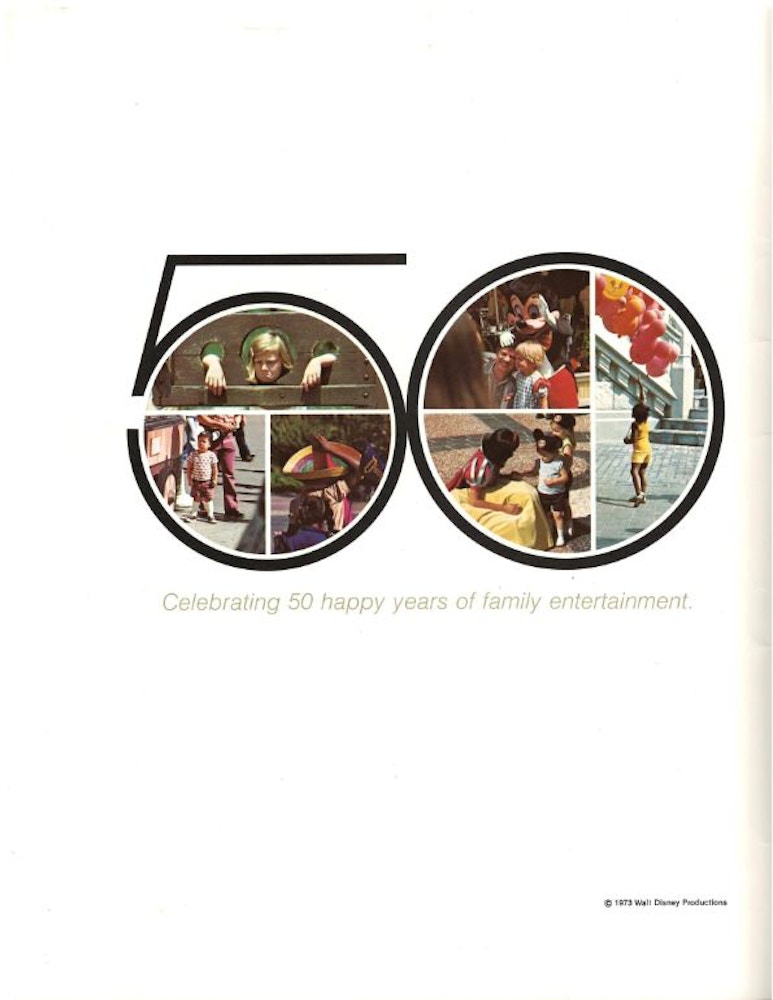 Meanwhile, the inside cover features a “50” adorned with images from the Disney Parks. 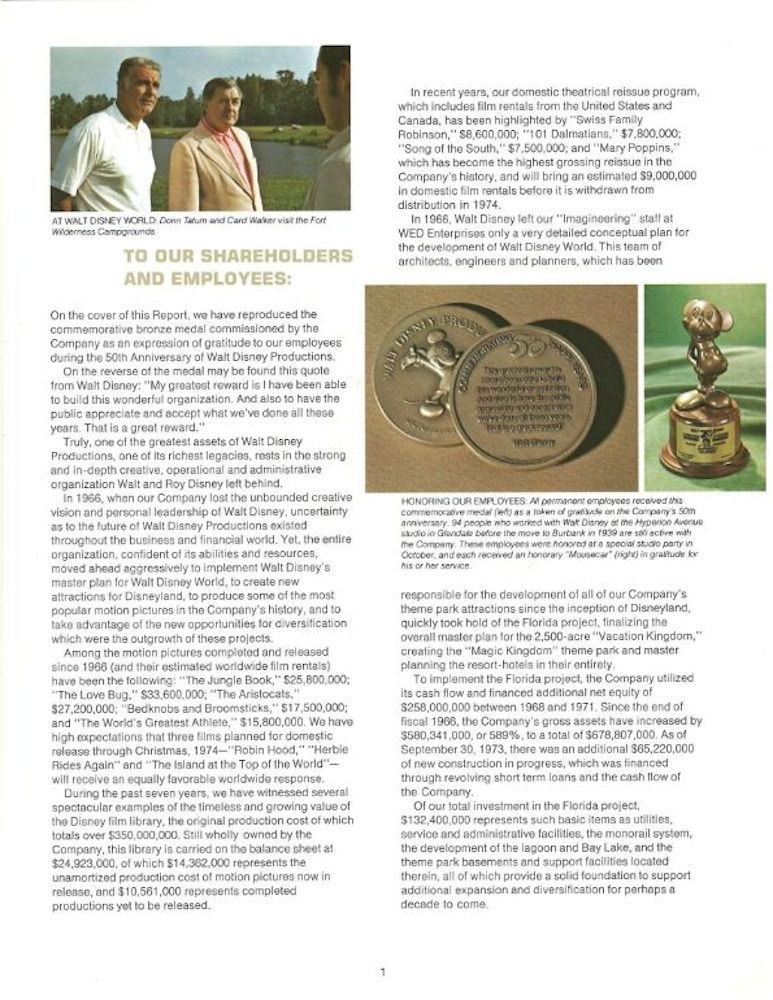 The report opens with a letter to shareholders and employees from Chairman of the Board, Donn Tatum and CEO Card Walker, both future Disney Legends. The letter reflects the celebratory feel of the company’s milestone anniversary by discussing the legacies of Walt and Roy Disney, and how they’ve performed since their deaths in 1966 and 1971, respectively.

Below, you can see some of the events the company held to mark the fiftieth, including special parades at both Disneyland and the Magic Kingdom, official proclamations from the California State Legislature and the Los Angeles City Council; and a retrospective of Disney films; seen here screening at New York City’s Lincoln Center. 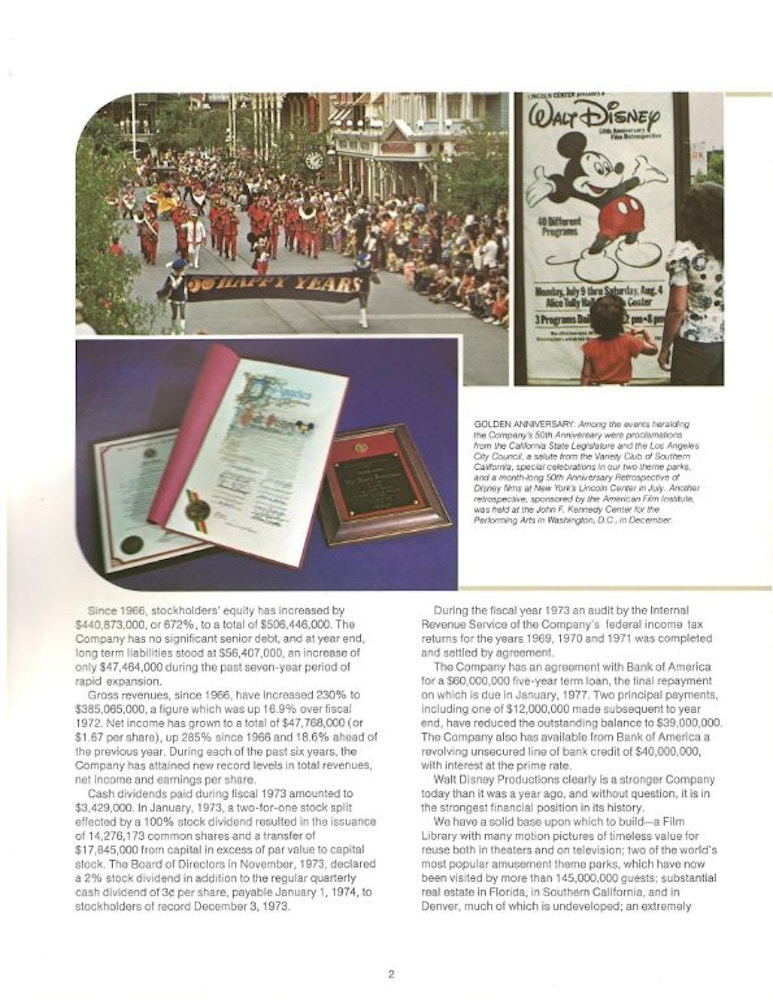 Tatum and Walker best sum up the company’s assets here:

“We have a solid base upon which to build – a Film Library with many motion pictures of timeless value for reuse both in theaters and on television; two of the world’s most popular amusement theme parks, which have now been visited by more than 145,000,000 guests; substantial real estate in Florida, in Southern California, and in Denver, much of which is undeveloped; an extremely popular television series which continues to anchor the Sunday evening schedule of the NBC Television Network; and a solid roster of rapidly growing ancillary businesses. We have a highly competent and motivated staff and a young, but seasoned management, and most important of all, we have a name and a platform of public acceptance second to none, now and for the foreseeable future.” 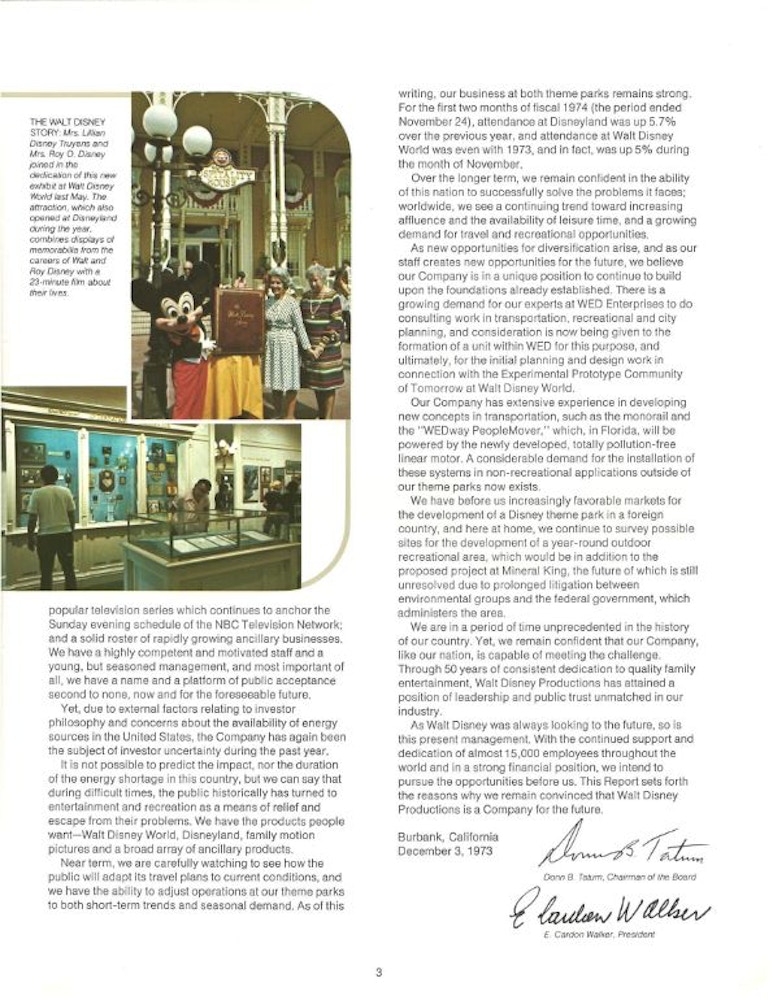 The letter then goes on to explain the challenges of the times; such as the growing energy crisis, and how the company is prepared to meet them. You can also see pictures from the dedication of The Walt Disney Story at the Magic Kingdom, which opened in 1973. 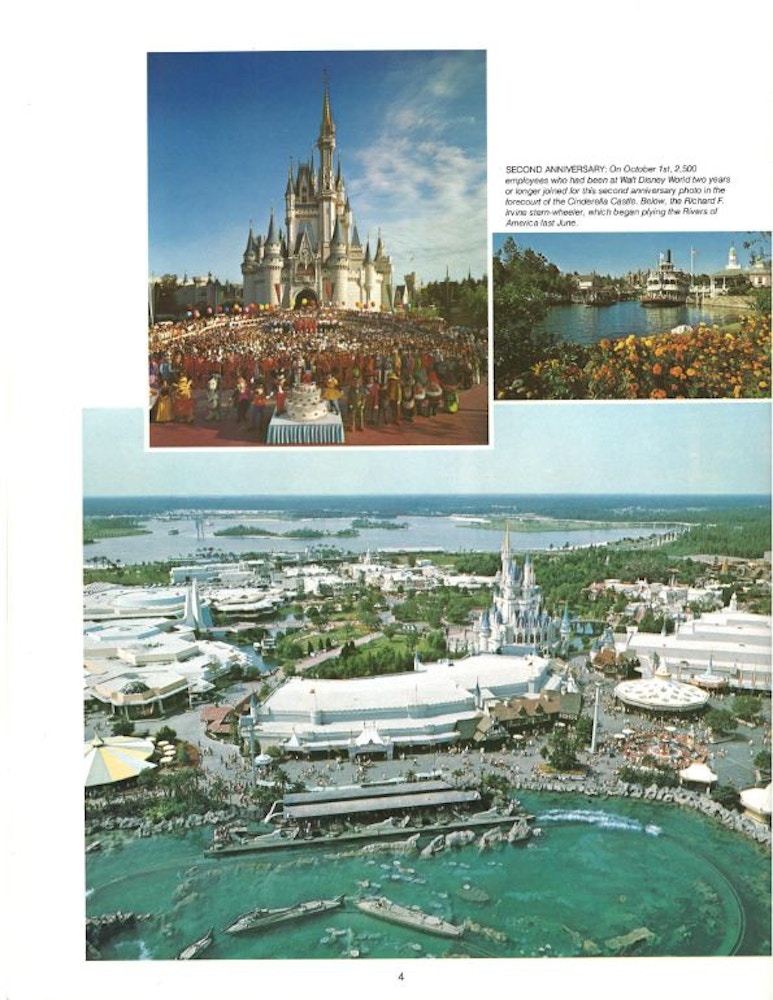 Check out these retro pictures of the Magic Kingdom! Look at that view of Mr. Toad’s Wild Ride and 20,000 Leagues Under the Sea: Submarine Voyage! 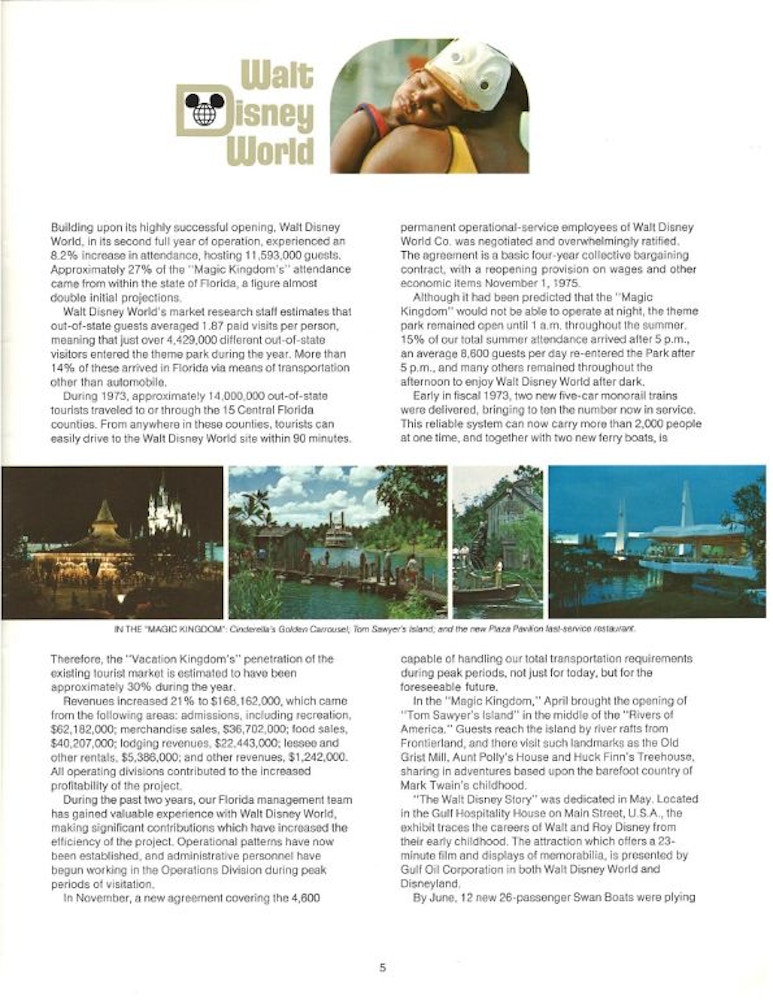 The report then focuses on Walt Disney World, including the new additions that happened during the fiscal year. In addition to The Walt Disney Story, Tom Sawyer Island, the Swan Boats, the Plaza Pavilion, and Pirates of the Caribbean all opened at the Magic Kingdom, while two new monorails and ferry boats were added to the fleet, allowing for increased ridership on resort transportation. 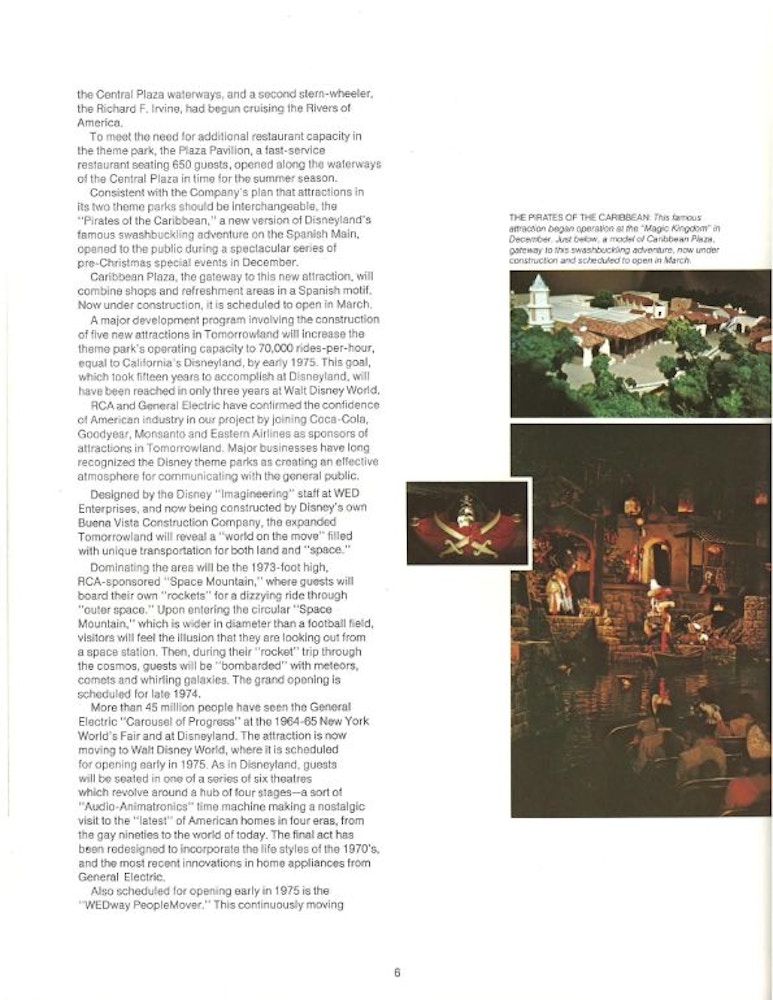 The section also offers a look ahead for the resort, particularly the Magic Kingdom’s Tomorrowland, with the additions of Space Mountain, the Carousel of Progress, the WEDway PeopleMover, and an expanded Grand Prix Raceway. While Space Mountain is scheduled here for late 1974, it and the Carousel of Progress would eventually open to guests on the same day: January 15th, 1975, with the PeopleMover opening in July of that year. (Perhaps to make up for the delay, the Rocket Jets, renamed the Star Jets, opened in late November 1974.) 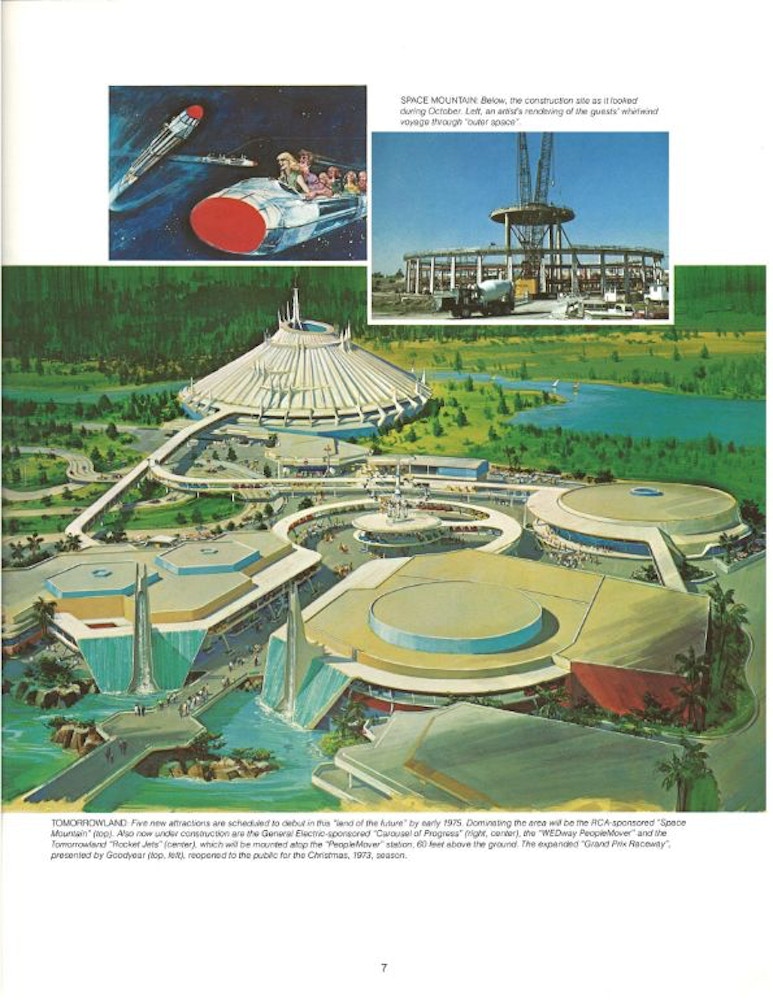 Those three attractions are featured in the above concept art for the new Tomorrowland. It’s interesting to see how much has changed… and how much has stayed the same! 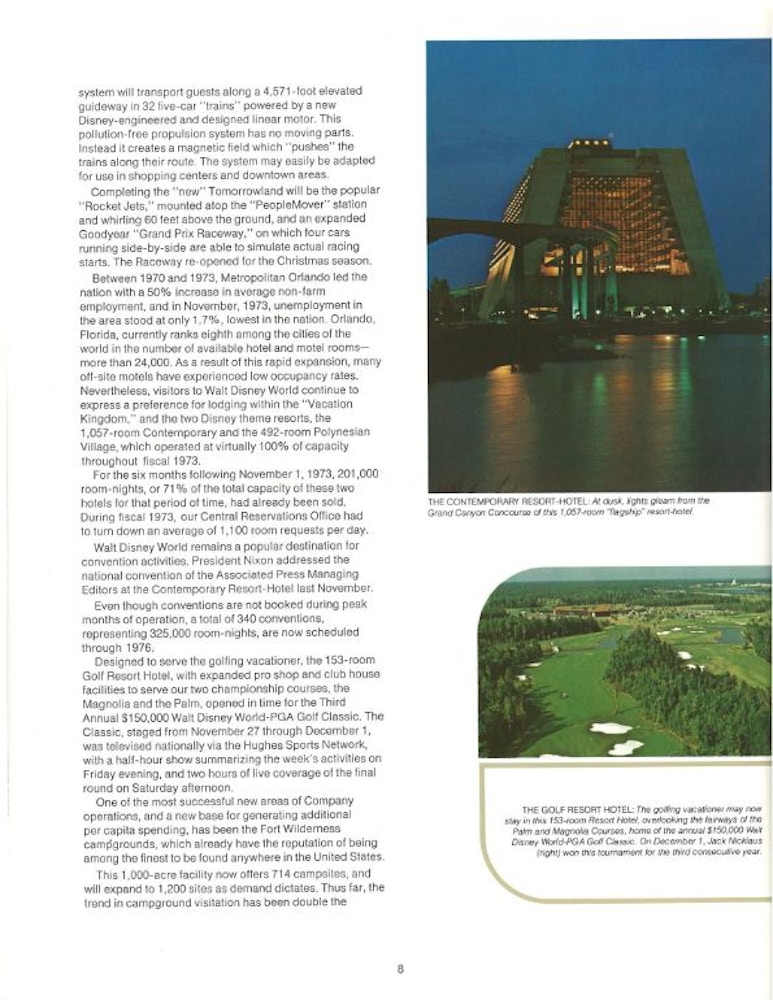 American history buffs, this one’s for you: the report also makes mention of then-President Richard Nixon’s speech to the national convention of Associated Press Managing Editors at The Contemporary Resort-Hotel in November 1973. What it doesn’t mention was that the speech was the birth of the phrase often associated with Nixon, especially in the following months as the Watergate Scandal raged on: “I’m not a crook.” 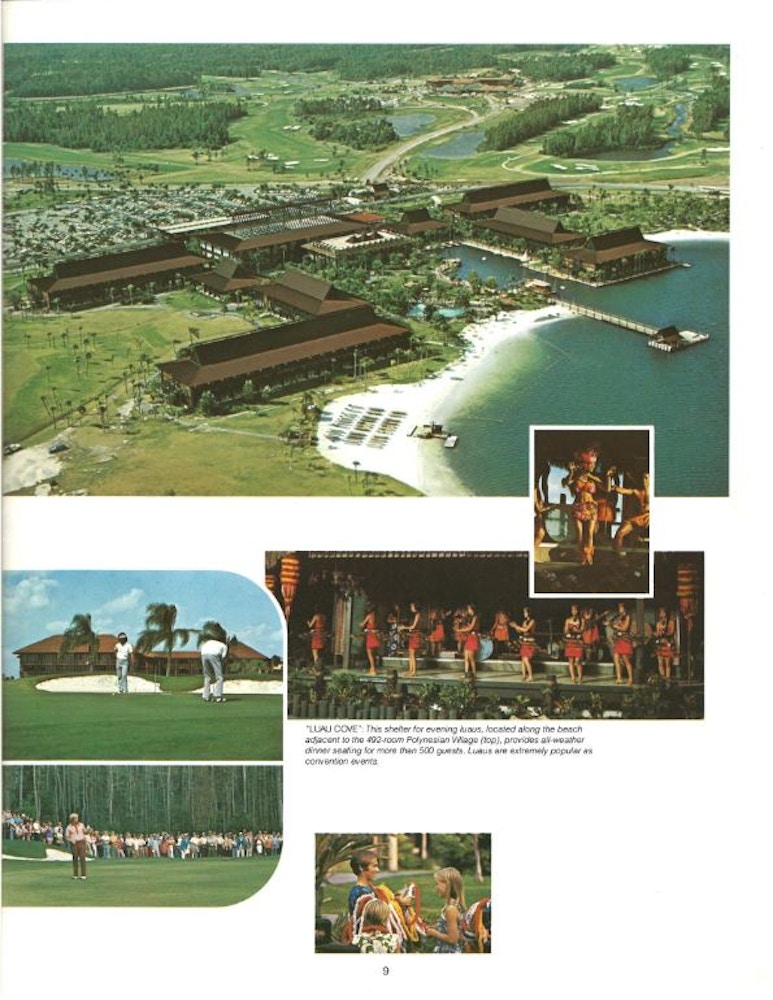 Look at those shots of Disney’s Polynesian Village Resort! 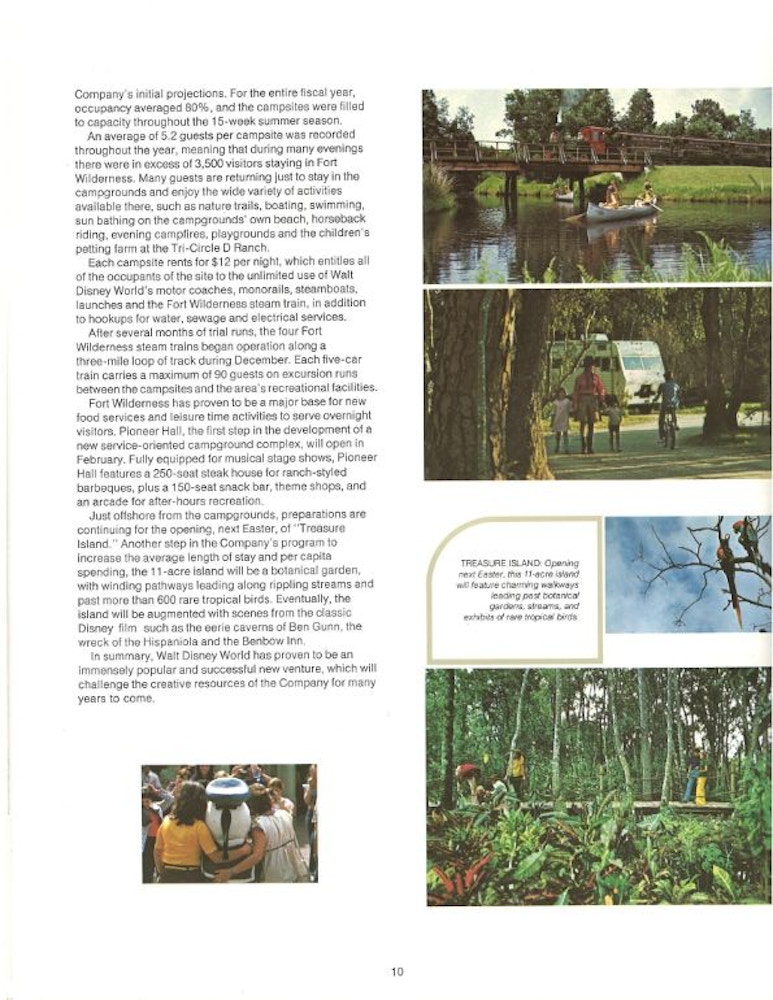 Also of interest is the opening of Pioneer Hall at the Fort Wilderness Campground Resort in February 1974. Four months later, it would become home to the Hoop-Dee-Doo Musical Revue, and it’s been that way ever since. In April of 1974, Treasure Island opened to the public, which would later be known as Discovery Island, home to exotic animal species until its closing on April 8th, 1999, exactly 25 years after it opened. 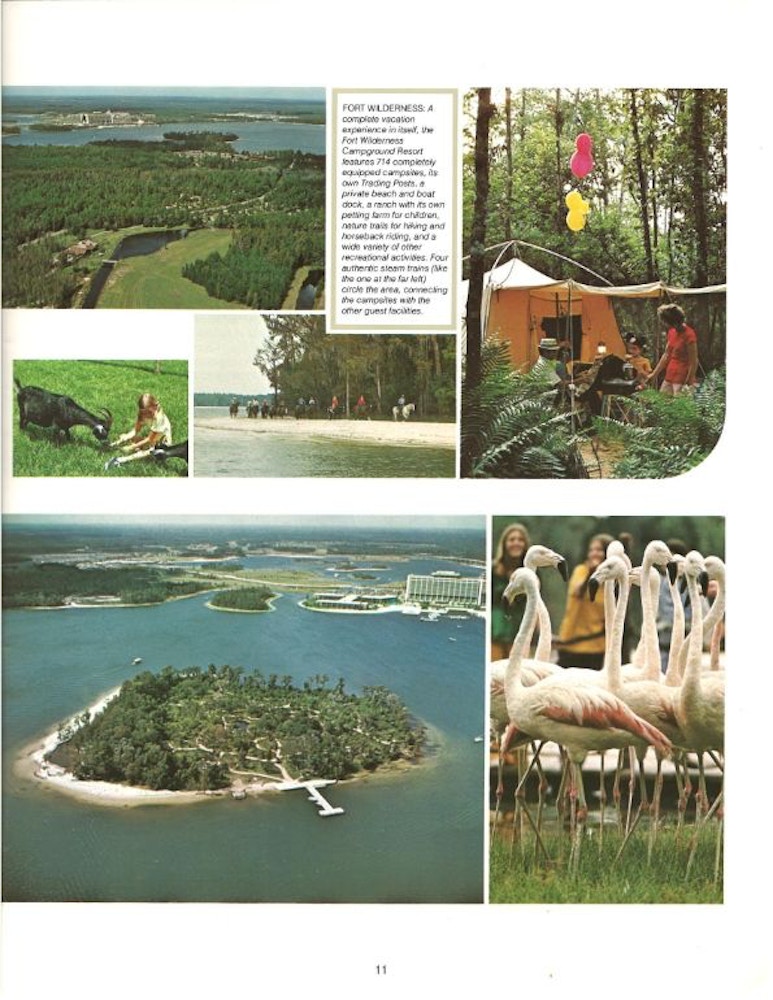 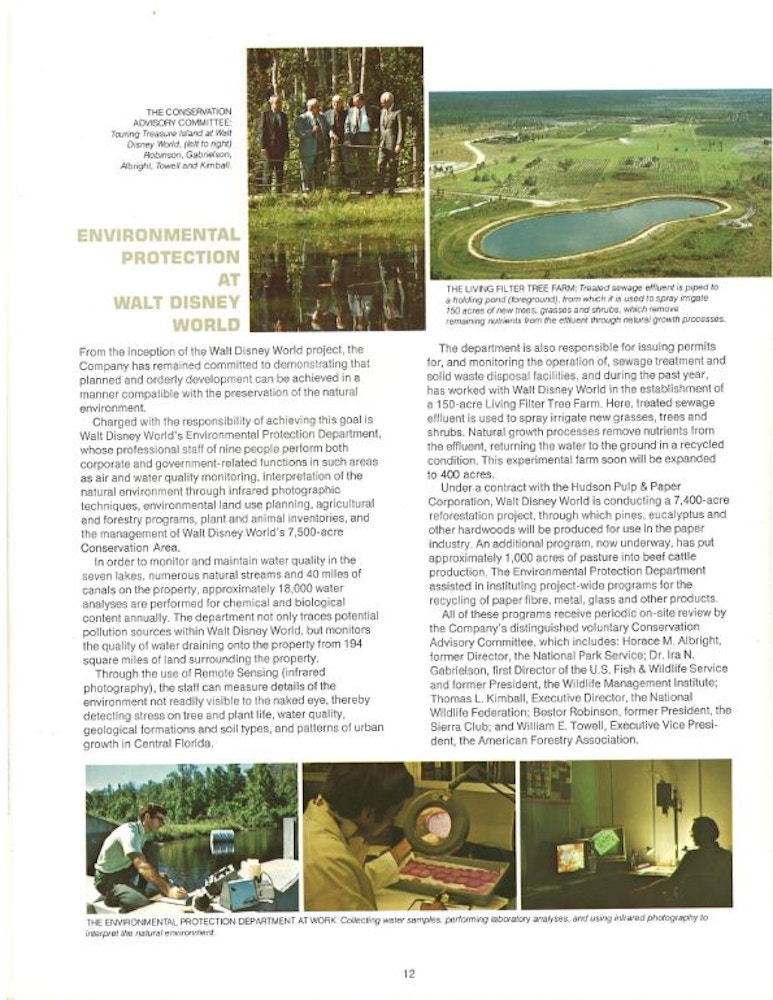 Also relatively new in 1973 was the Walt Disney Travel Company, Inc., which helps guests from around the world book vacations to Walt Disney World and Disneyland, including airfare, hotel accommodations, and park tickets. 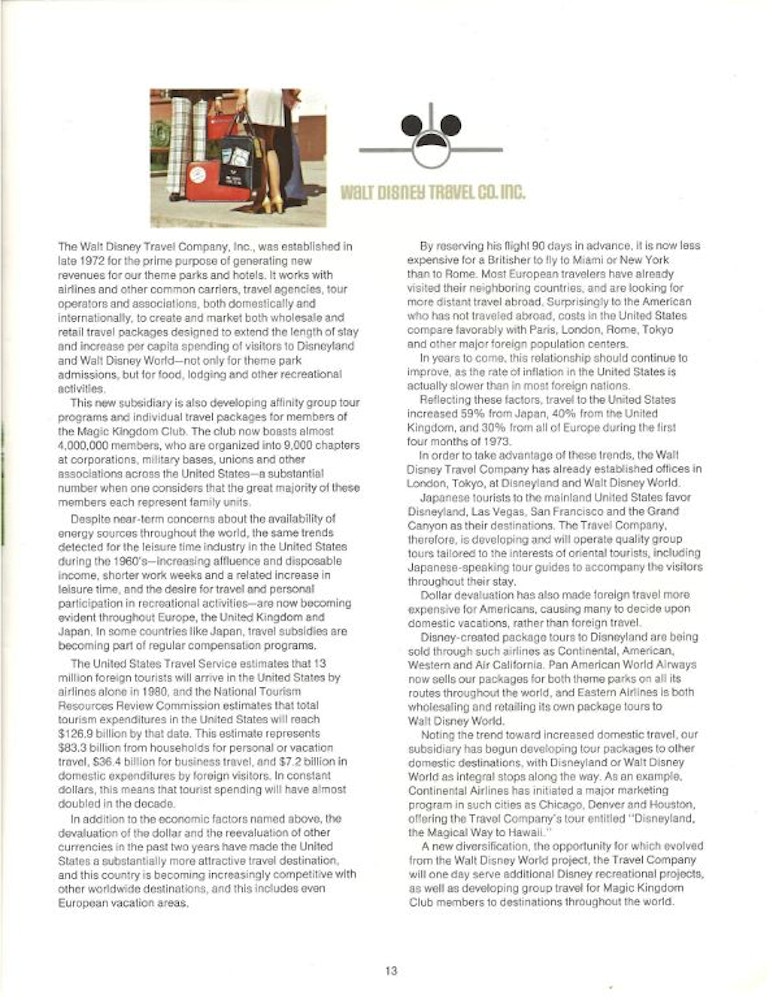 The final section in this half pertains to Walt Disney Productions’ real estate holdings, including Motor Inn Plaza, where outside companies operate hotels at Walt Disney World. This is now known as the Disney Springs Resort Area. 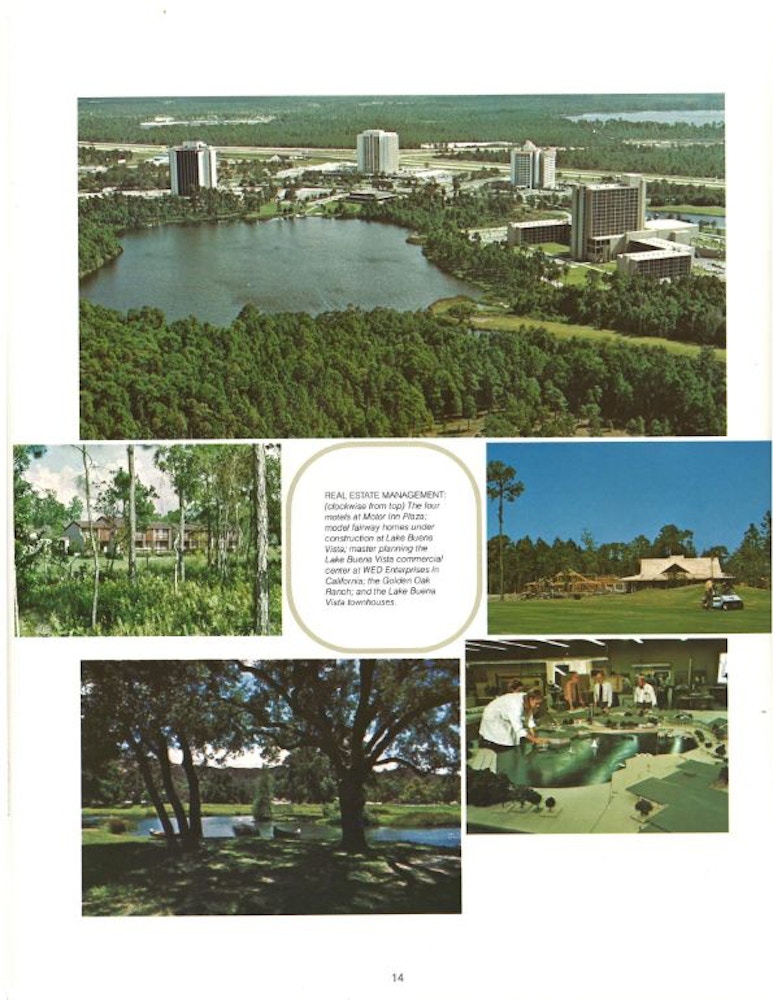 The information reads that even from the beginning, Disney realized that they would have to let other companies into their World:

“Ever since Walt Disney acquired the site for Walt Disney World in Florida, the Company has always considered some of the acreage it owns to be surplus, and available for other development.” 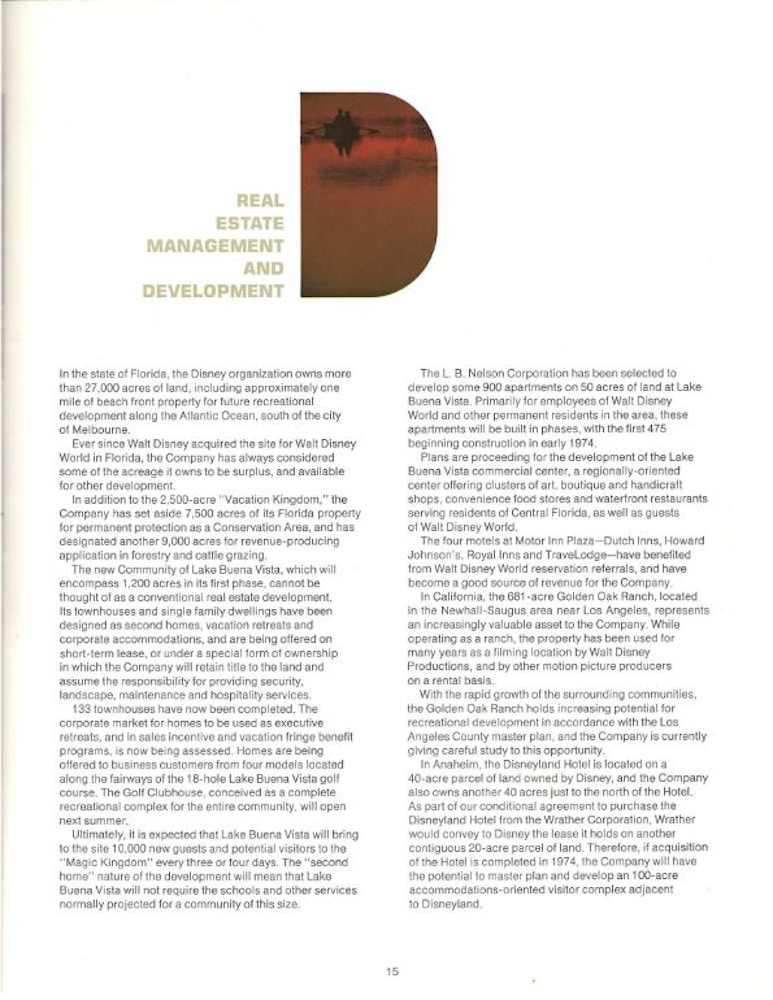 An interesting point of note here are the plans for the Community of Lake Buena Vista, which offered townhouses and villas for residential development. Years later, it would become a resort hotel: first The Village Resort, then The Disney Village Resort, before becoming the Disney Institute, which would ultimately become Disney’s Saratoga Springs Resort and Spa.

But what about Disneyland and the film and television offerings for 1974 and beyond? Find out when we return for part two! And be sure to check out our look at the 1965 Annual Report, when most of this was still just a dream!

Next
RECIPE: Capture The Spirit of Norway at EPCOT With Our DIY School Bread Copycat Recipe