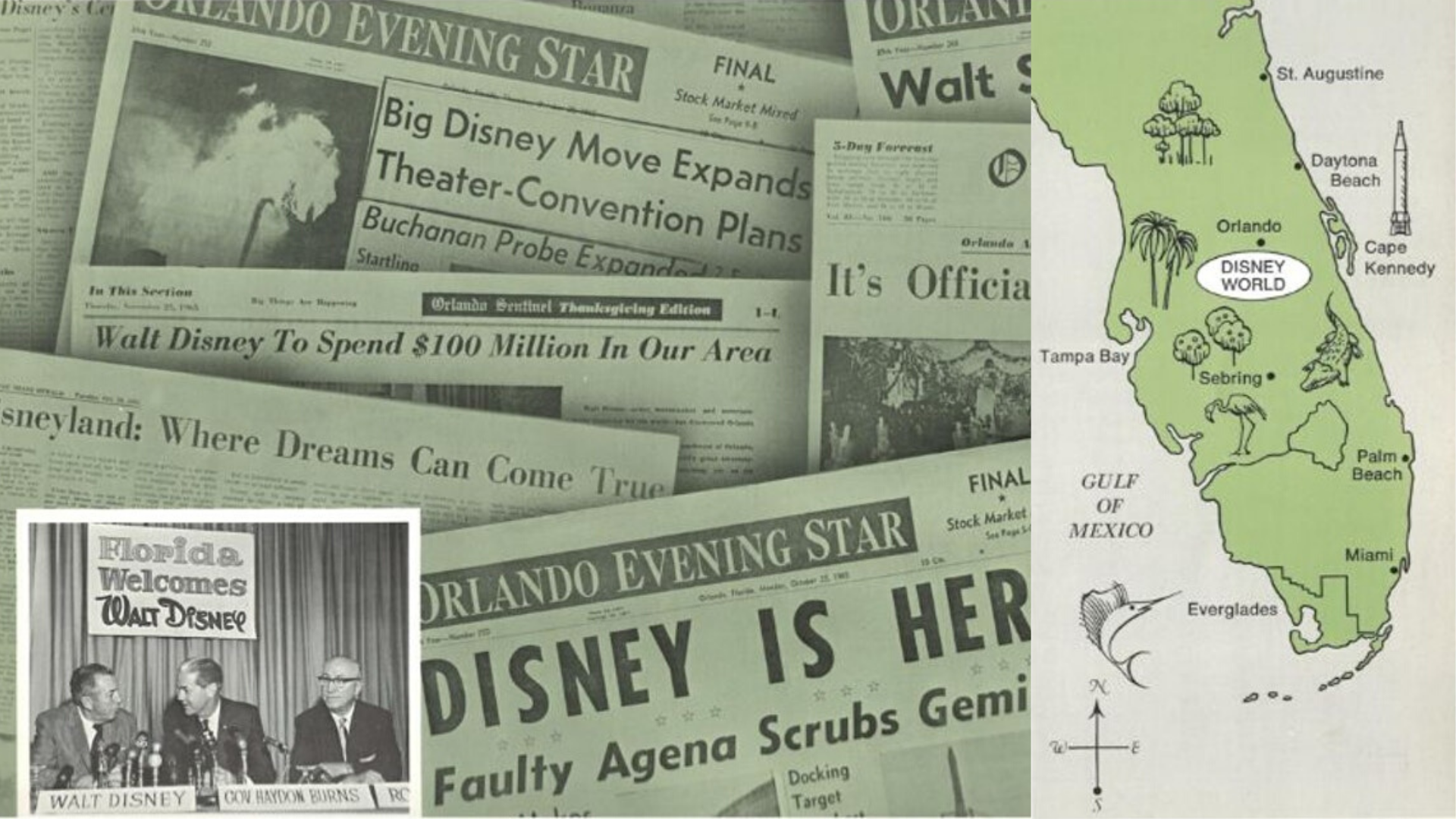 With Disney Parks around the world closed for the foreseeable future, WDWNT is dipping into our archives of vintage materials for a look back into Disney history! We’re back with the second part of our look at Walt Disney Productions’ 1965 Annual Report, featuring Disney’s 1966 offerings in film, television, Disneyland and other real estate ventures, including a certain Project Florida you may be familiar with! 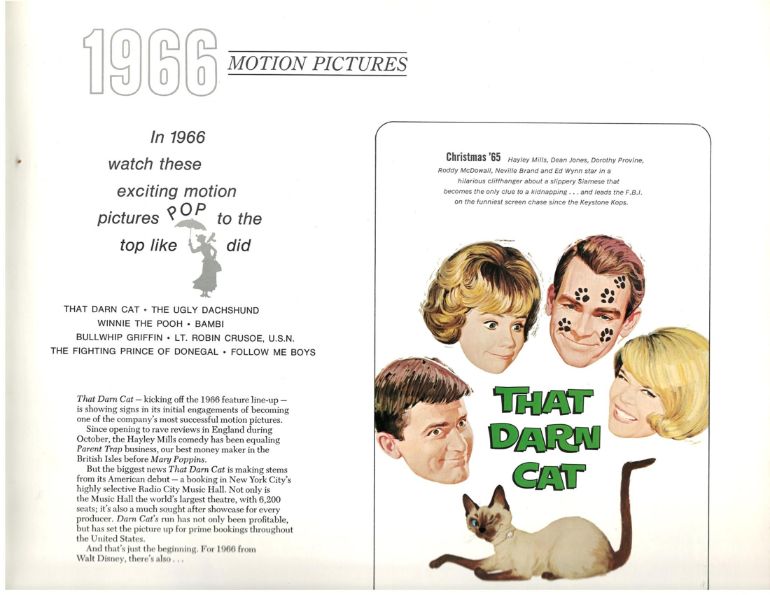 This section features Disney’s 1966 feature film and theatrical short releases, including a look back at the premiere of That Darn Cat (which released in December 1965), and looks ahead to The Ugly Dachshund, Winnie the Pooh and the Honey Tree, a re-release of Bambi, The Adventures of Bullwhip Griffin (later pushed back to March 1967), Lt. Robin Crusoe, U.S.N., The Fighting Prince of Donegal, and Follow Me, Boys! 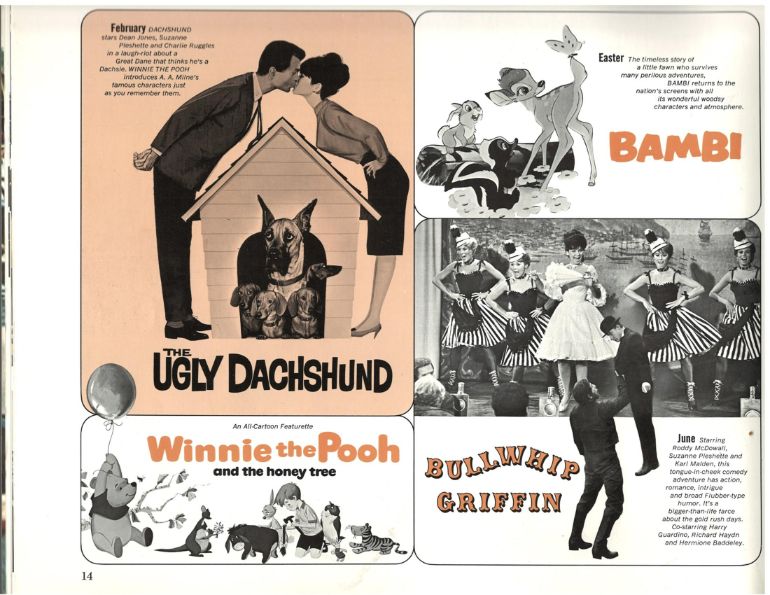 Winnie the Pooh and the Honey Tree was Disney’s first production featuring A. A. Milne’s beloved bear and the rest of the residents of the Hundred Acre Wood, which would become one of Disney’s most iconic franchises. 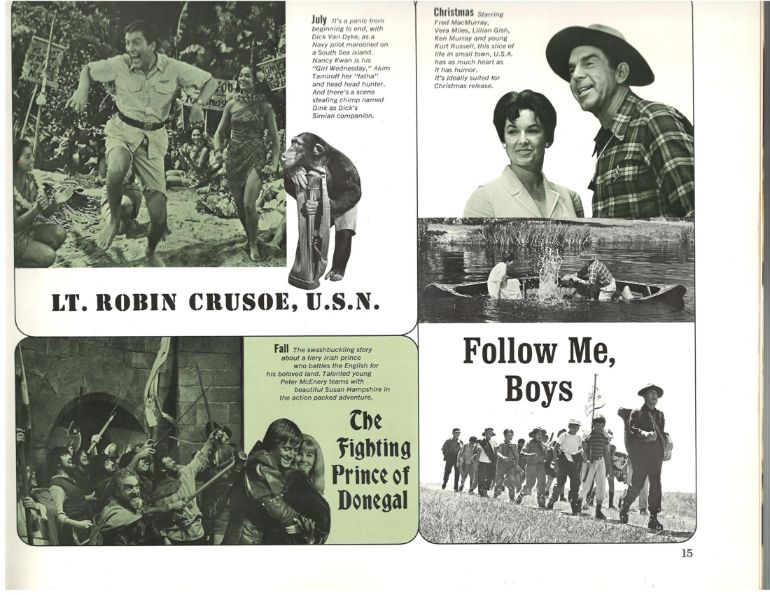 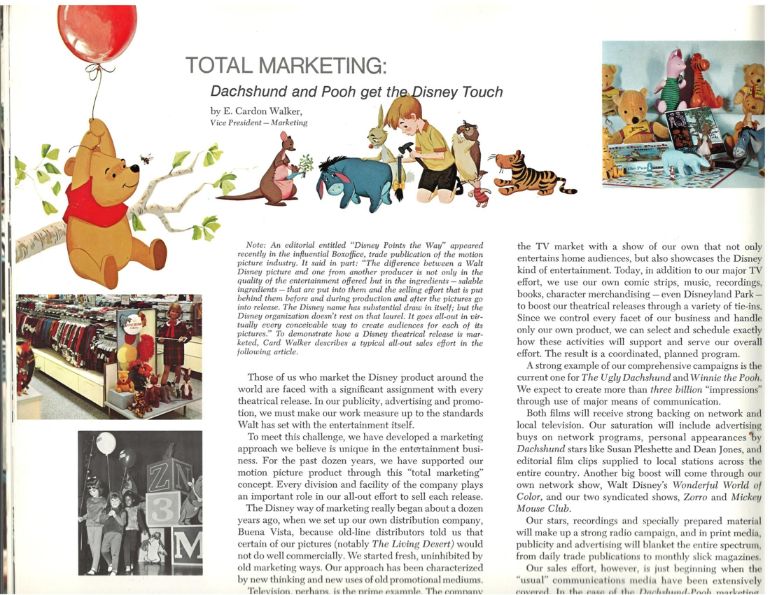 Future Disney Legend Card Walker discusses how Disney markets a film, outlining the promotional and merchandising strategies in the works for The Ugly Dachshund and Winnie the Pooh and the Honey Tree, including media appearances, tie-ins with major brands like Sears, Kal Kan Pet Food, and Nabisco, and public appearances, including at the Tournament of Roses parade. 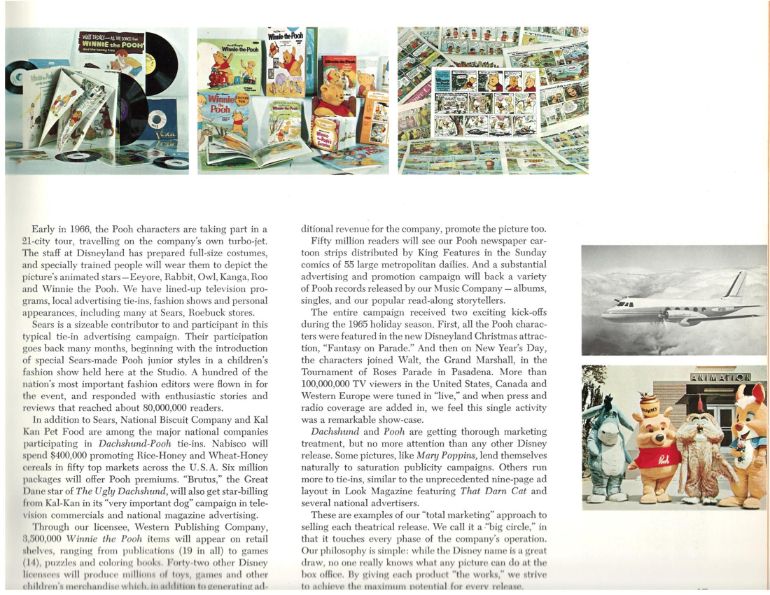 For parks fans, the report offers a look at the early walk-around character costumes for Winnie the Pooh, Rabbit, Eeyore, and Owl. Perhaps most fascinating is that while many of these costumes have changed over the years (with Rabbit becoming a rarity to see, and Owl virtually gone), Eeyore looks strikingly similar to the 2020 version, minus some color changes and added stitching.

“These are examples of our ‘total marketing’ approach to selling each theatrical release. We call it a ‘big circle,’ in that it touches every phase of the company’s operation. Our philosophy is simple: while the Disney name is a great draw, no one really knows what any picture can do at the box office. By giving each product ‘the works,’ we strive to achieve the maximum potential for every release.” 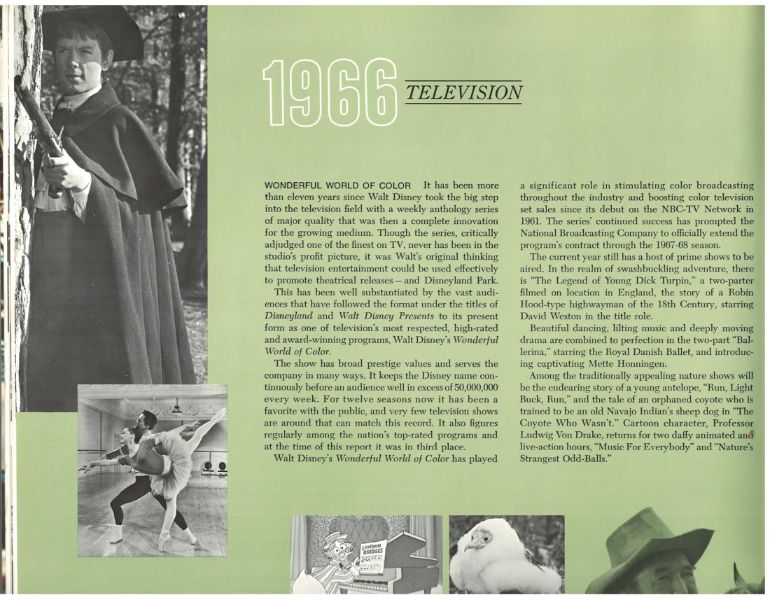 In television, Disney celebrates NBC’s extension of “Walt Disney’s Wonderful World of Color” through the 1967-68 season, and teases future episodes, including “The Legend of Young Dick Turpin” and “Ballerina,” starring the Royal Danish Ballet. Also touched on are the syndicated successes of the “Mickey Mouse Club” and “Zorro.” 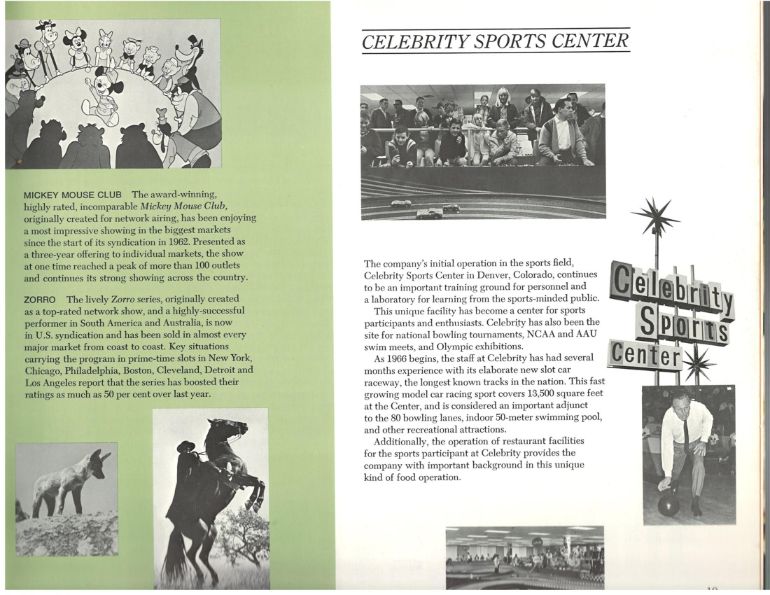 There’s even a report on Celebrity Sports Center in Denver, Colorado, which Walt Disney co-founded in 1960, and Walt Disney Productions purchased outright in 1962. Home to bowling alleys, a swimming pool, and a giant slot car track, Disney would soon use the facility as a training ground for staff soon heading to Florida to work at the new Walt Disney World. Disney would own and operate the facility until 1979. 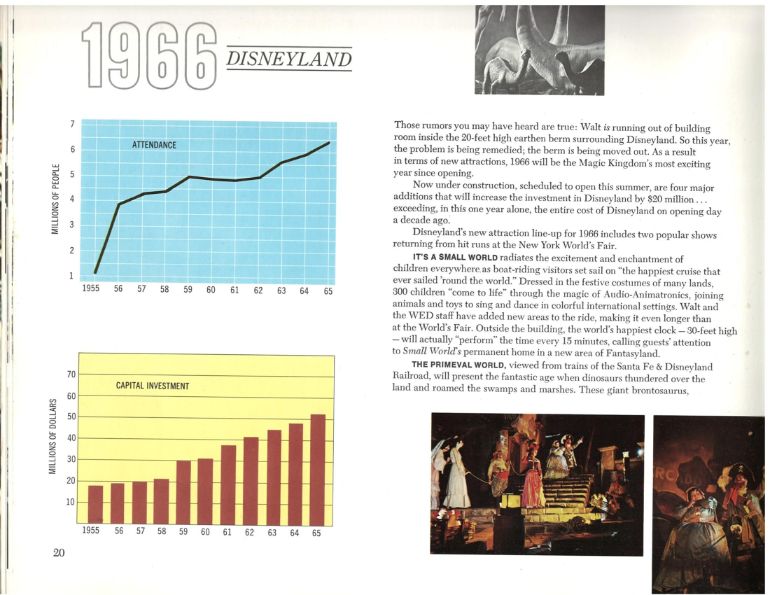 “But what’s happening at Disneyland in 1966,” you may ask. It’s nothing much, only the opening of New Orleans Square, the Primeval World diorama at the Santa Fe & Disneyland Railroad, and It’s a Small World! 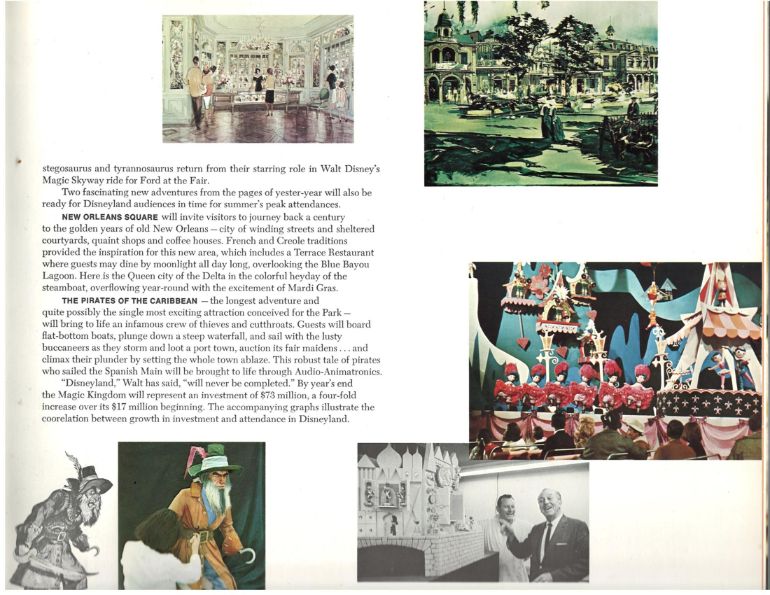 Also mentioned to open is The Pirates of the Caribbean, which wouldn’t actually open until March 1967, where it would lose “The” from its name, and become one of Disney Parks’ most famous attractions. 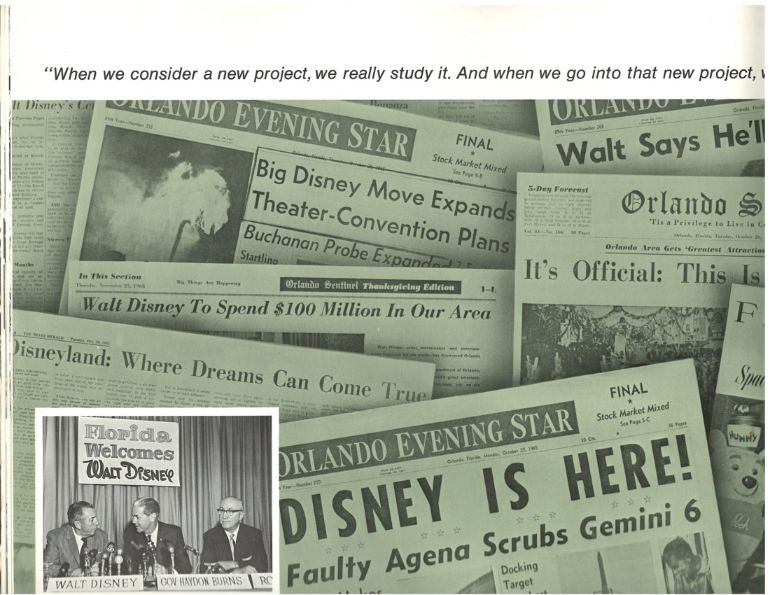 But what about this “Disney World?” Why would Walt Disney want to build something in Florida, of all places? Thankfully, there’s an explanation for that in this section, which discusses Florida’s status as “the nation’s most popular state for tourists,” particularly for those who live east of the Rocky Mountains. 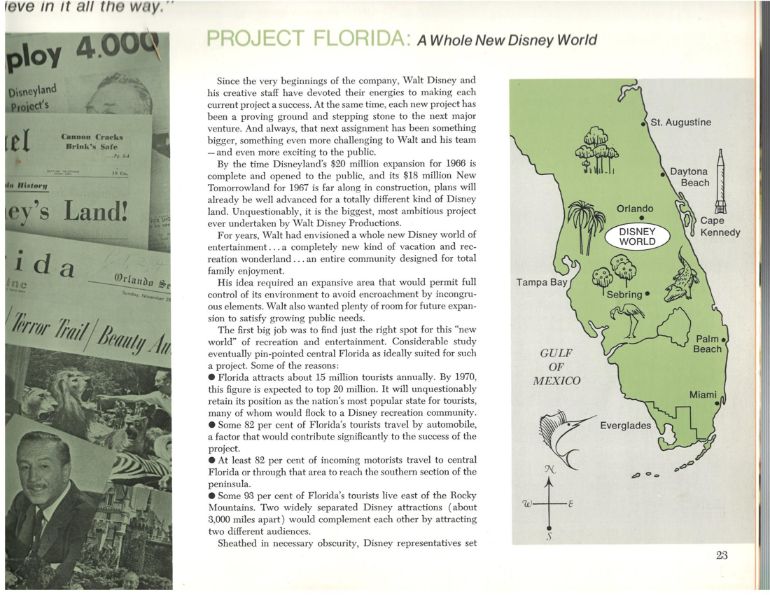 Of course, we all know that Walt Disney World would become a crowning triumph and one of Disney’s most successful projects ever, but back in 1965, it didn’t seem so certain. The piece continues to describe the real estate and political hurdles that faced the company as they moved forward with Project Florida. 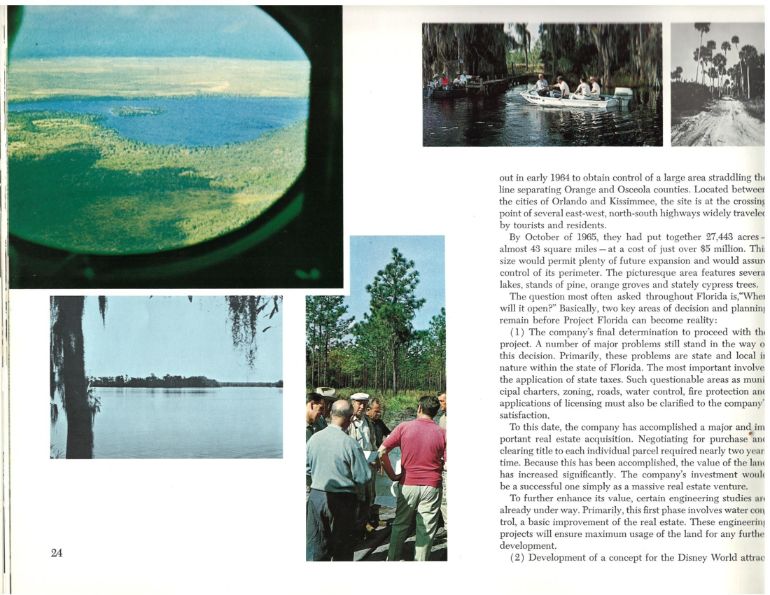 One of the main issues included “municipal charters, zoning, roads, water control, fire protection and applications of licensing.” Many of these issues would be solved with the creation of what would become the Reedy Creek Improvement District in 1967. 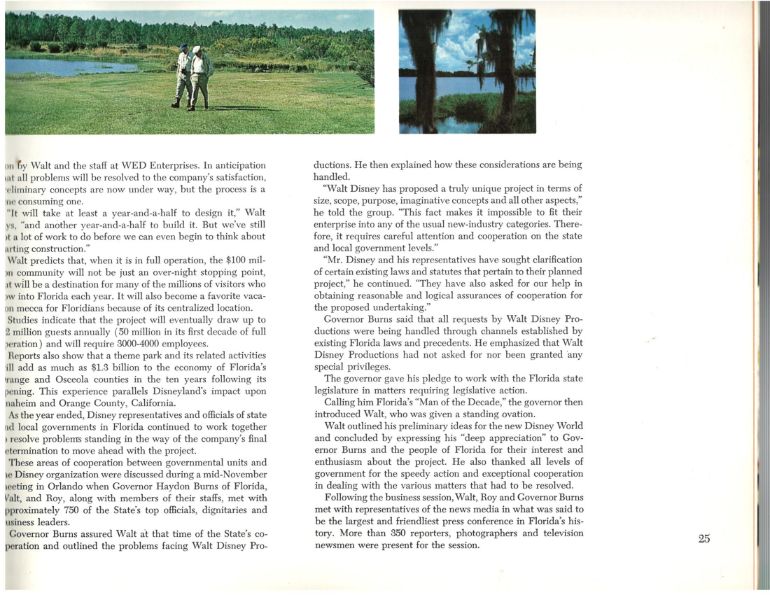 I’d like to close this part of the report with a prophetic quote:

“Walt predicts that, when it is in full operation, the $100 million community will not be just an over-night stopping point, [but] will be a destination for many of the millions of visitors who [flow] into Florida each year. It will also become a favorite vacation mecca for Floridians because of its centralized location.”

We may not have gotten exactly what Walt thought of, but his prediction was right on the money!

So what was in the works for 1967 and beyond? Keep reading WDWNT for the third and final part of the 1965 financial report! Or check out the first part, featuring words from Walt and Roy Disney themselves!