With Disney Parks around the world closed for the foreseeable future, WDWNT is dipping into our archives of vintage parks materials for a look back into parks history! And in celebration of Hollywood Studios Appreciation Week, all this week, we’re peeking into the studio vault with items from the early years of the Disney-MGM Studios! Hollywood loves a guest star, and at the Disney-MGM Studios in 1993, no stars were bigger than Aladdin, Jasmine, and the Genie, as seen in this guidemap!

Note: This article will detail the guidemap page by page, but WIGS Members will have access to download a full-resolution PDF of the entire thing. Head on over to Patreon.com/wdwnt to join WIGS, the WDWNT Inner Globe Society, for as little as $2 a month and unlock access to great content like this, and much more! 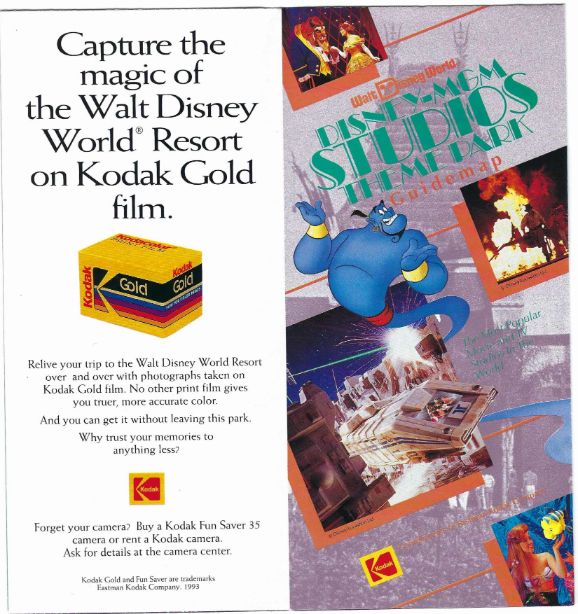 With Aladdin being the highest-grossing film of 1992, it’s no surprise that the Genie takes a featured position on the cover to the guidemap for “the most popular movie and TV studios in the world.” 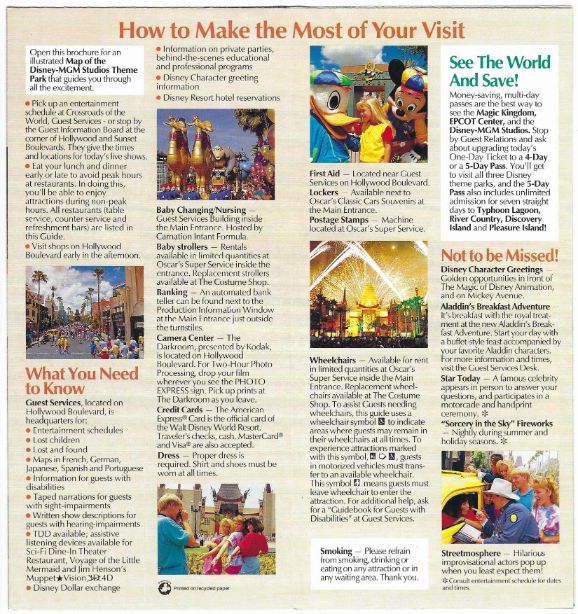 “How to Make the Most of Your Visit” offers basic information along with tips and tricks to help guests maximize their time, like eating at off-peak hours to enjoy attractions when the lines are shorter. And Aladdin-fever has even extended to the dining sector with “Aladdin’s Breakfast Adventure,” with characters from the film greeting guests at a breakfast buffet. Jasmine and flapjacks? It sounds like an adventure to me! 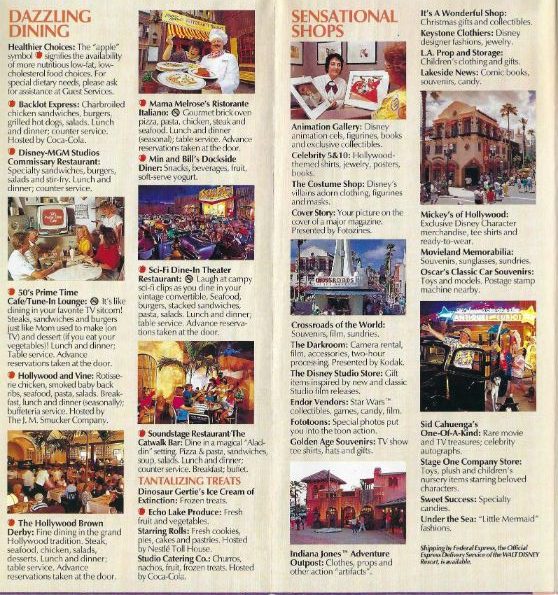 The map folds out to a spread featuring dining, shopping, photo tips, and offerings from the rest of Walt Disney World. On the dining end, not only does Aladdin have his own breakfast adventure, but decor inspired by the film is now featured at the Soundstage Restaurant. 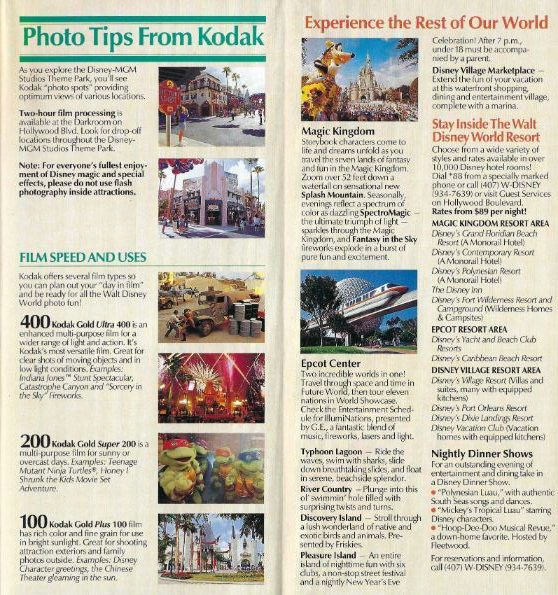 Kodak offers which film types will best capture moments at the park, while the newest thing at Walt Disney World is a new ride at the Magic Kingdom: Splash Mountain. (It’ll never last.) 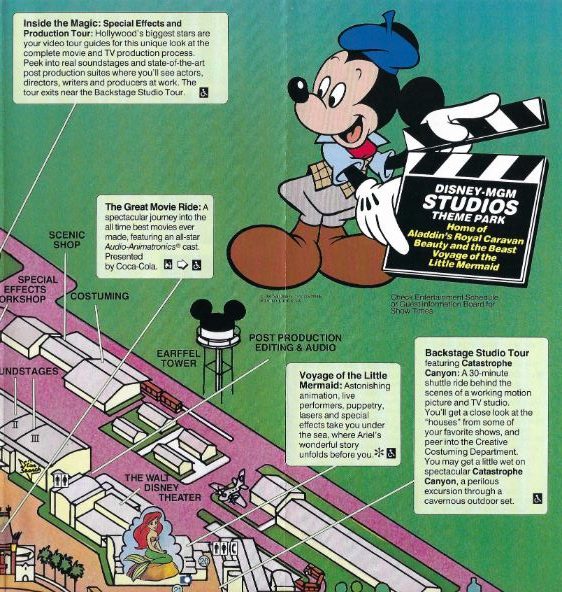 The rest is the map of the park itself. (Also, just a strange observation: only one attraction on the above section of the map is still operating. Times have certainly changed this park.) 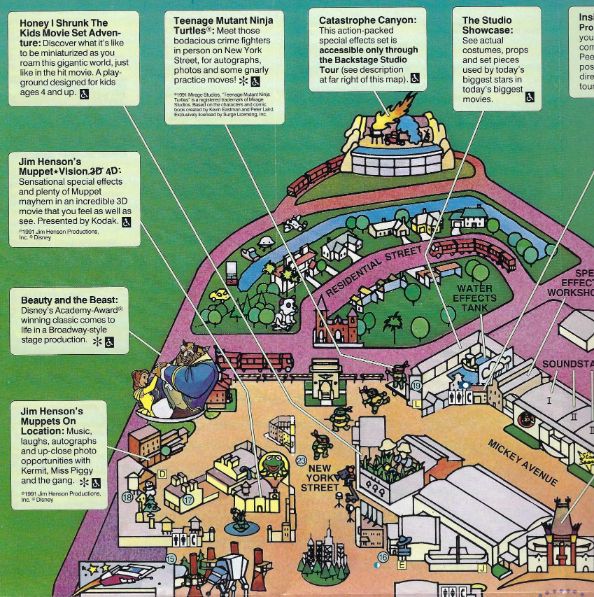 For those who looked at our 1991 guidebook, you may notice that The Studio Showcase has moved locations, from across from Muppet*Vision 3D (where PizzeRizzo is currently located) to near the Water Effects Tank, predicting its future as the post-show to what would become the Studio Backlot Tour. On an unrelated note, I really love the art style of this map. Look at how cute the Teenage Mutant Ninja Turtles look! 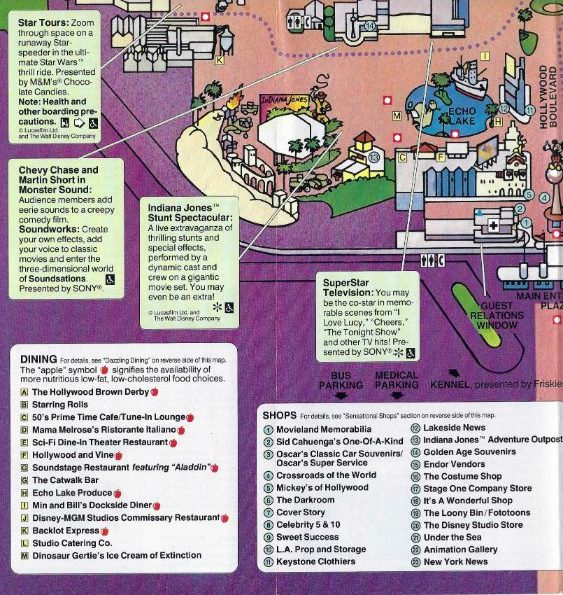 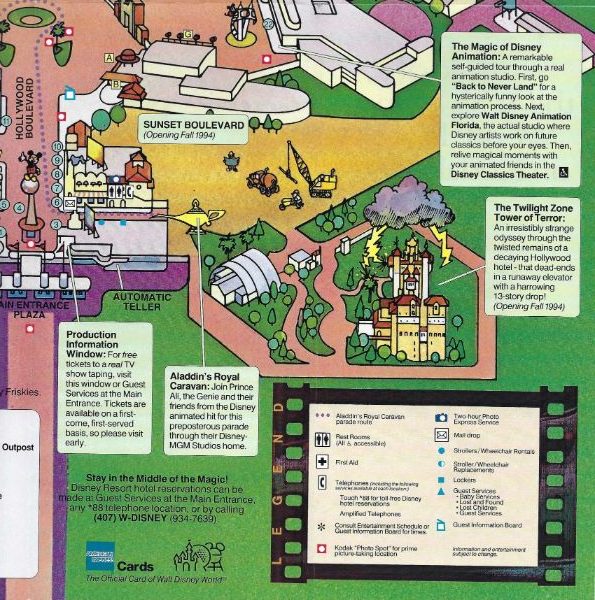 And Aladdin is back again with the daytime parade “Aladdin’s Royal Caravan,” described like this: “Join Prince Ali, the Genie and their friends from the Disney animated hit for this preposterous parade through their Disney-MGM Studios home.” Meanwhile, the park is preparing for its biggest expansion to date with the construction of Sunset Boulevard and its star attraction: The Twilight Zone Tower of Terror. Care for a sneak preview of the fifth dimension?

“An irresistibly strange odyssey through the twisted remains of a decaying Hollywood hotel – that dead-ends in a runaway elevator with a harrowing 13-story drop!”

In 1993, big changes were on the horizon at the Disney-MGM Studios. You could say it was a wish come true!

Next
Back to the Future LIVE! – The Complete History of the Disney-MGM Studios Backlot Theater Airs Tonight at 9PM