We’re back at Disney Springs today to oversee the reopenings of Pizza Ponte and Morimoto Asia, with the surprise reopening of Aerophile as well. However, any trip around the Springs will open up the appetite, and when we saw Wine Bar George tweet about their “new” Frozen & Fries combos, we beelined our way to their quick-service window, The Basket. 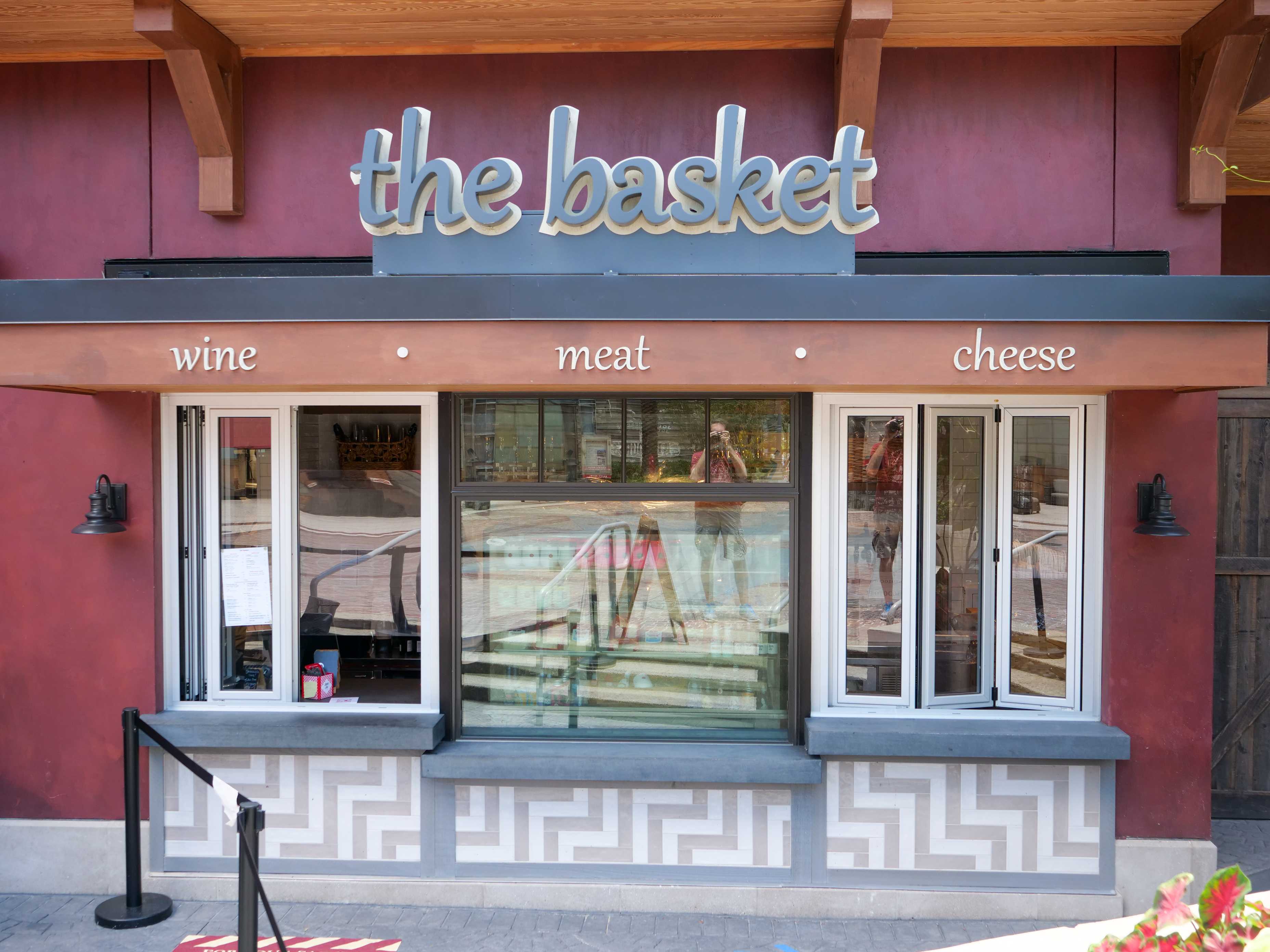 The Basket is quaint pick-up window that specializes in fancy snacks to go, most popularly known for its frozen drinks, like the Frozcato and Friezling, both concocted with Dole Whip. 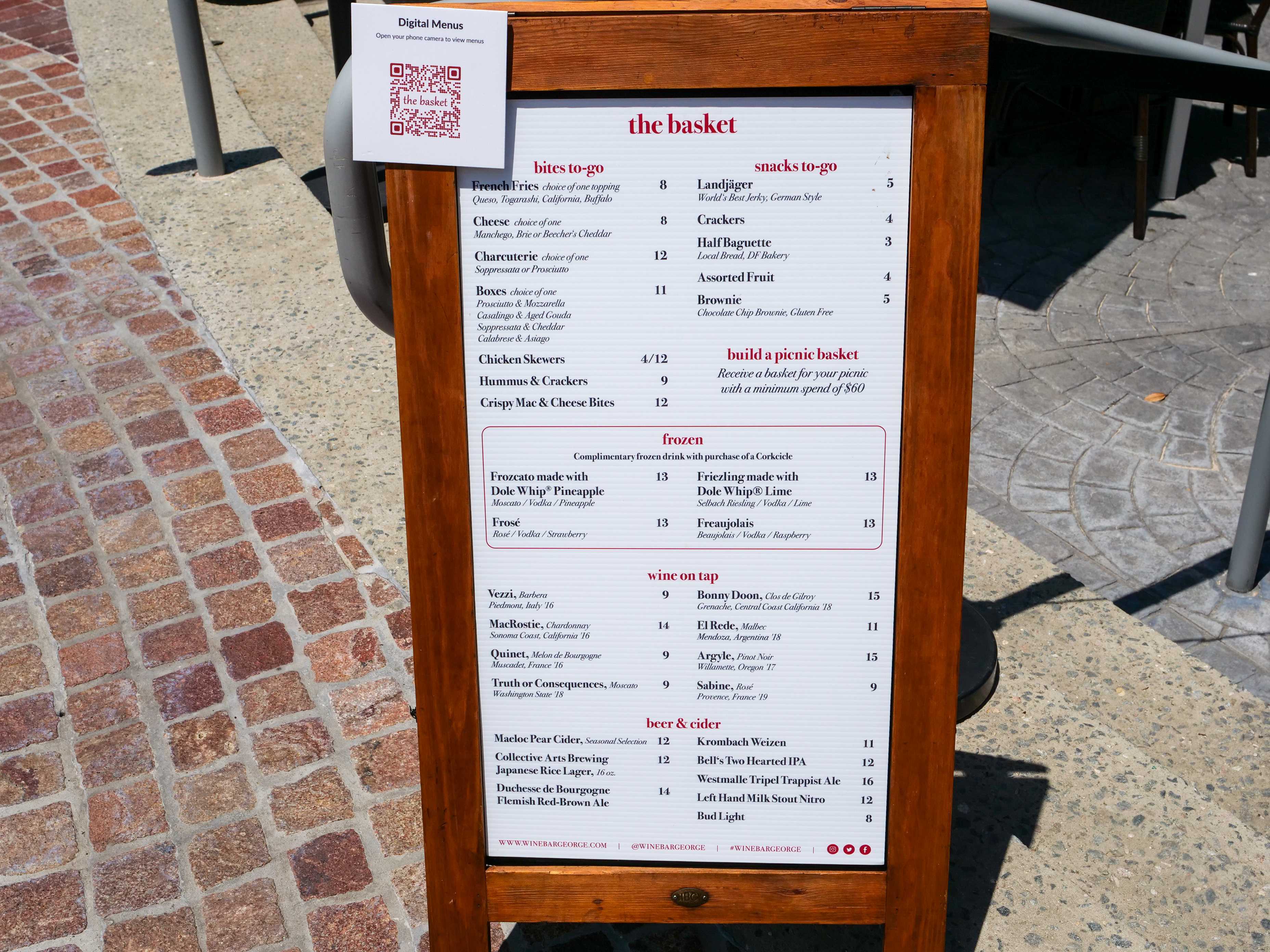 It’s worth noting that the Frozen & Fries are not actually a combo offered on the menu, according to the employees we asked. Those were merely their pairing suggestions. However, the new loaded fries still beckoned to us, and would make an excellent snack with any frozen drink here. There are four flavors of loaded French Fries, all offered at $8: Queso, Togarashi, California, and Buffalo. The Queso fries feature a roasted red pepper 4 cheese sauce, pickled Fresno peppers, and cilantro while the Buffalo fries feature buffalo salt, buffalo sauce, blue cheese chunks, and chives. Below, we’ll delve into the two flavors we tried, which were California and Togarashi. 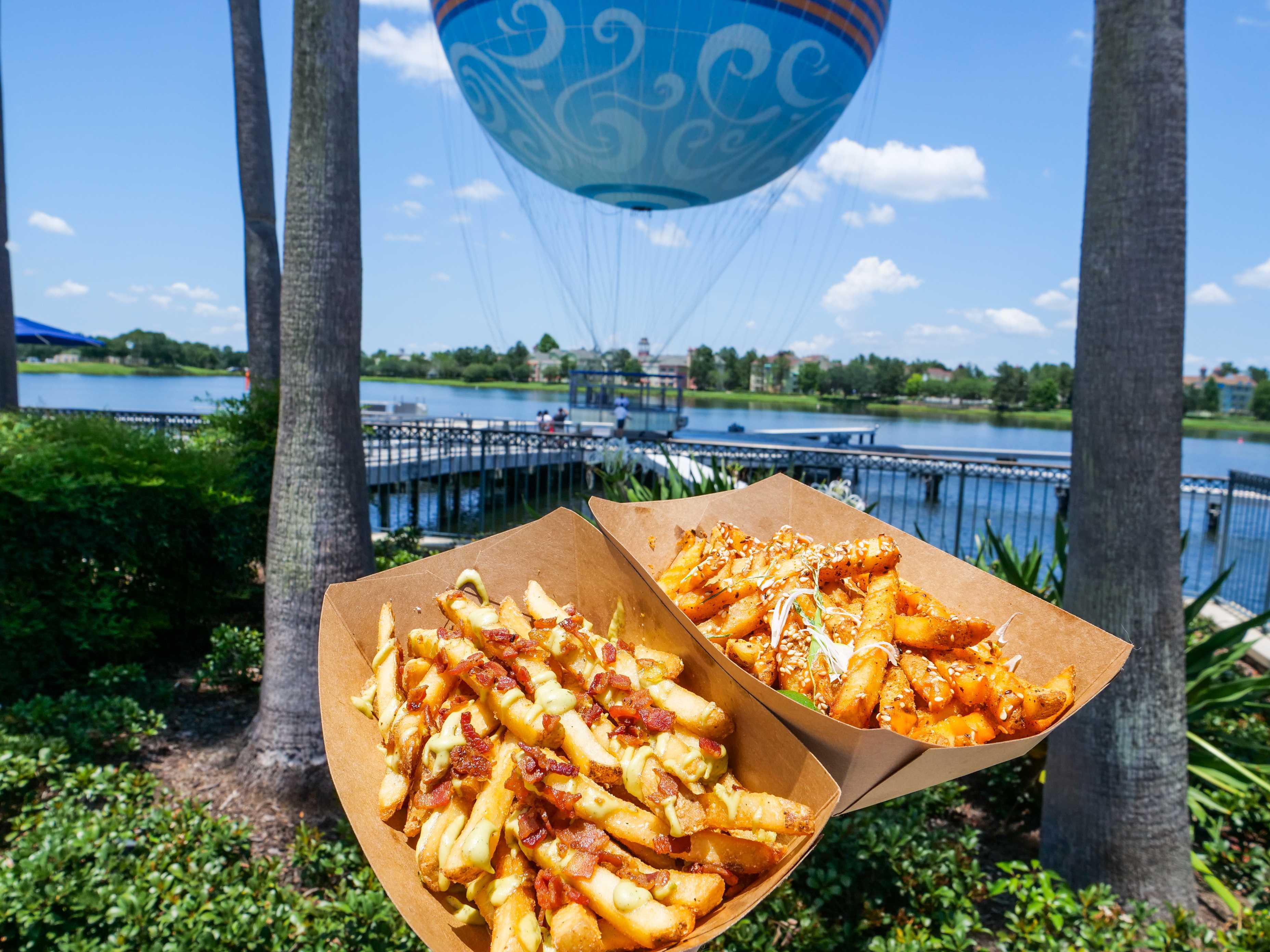 Each $8 order of loaded fries gets you a giant 16oz carton of fresh fries. 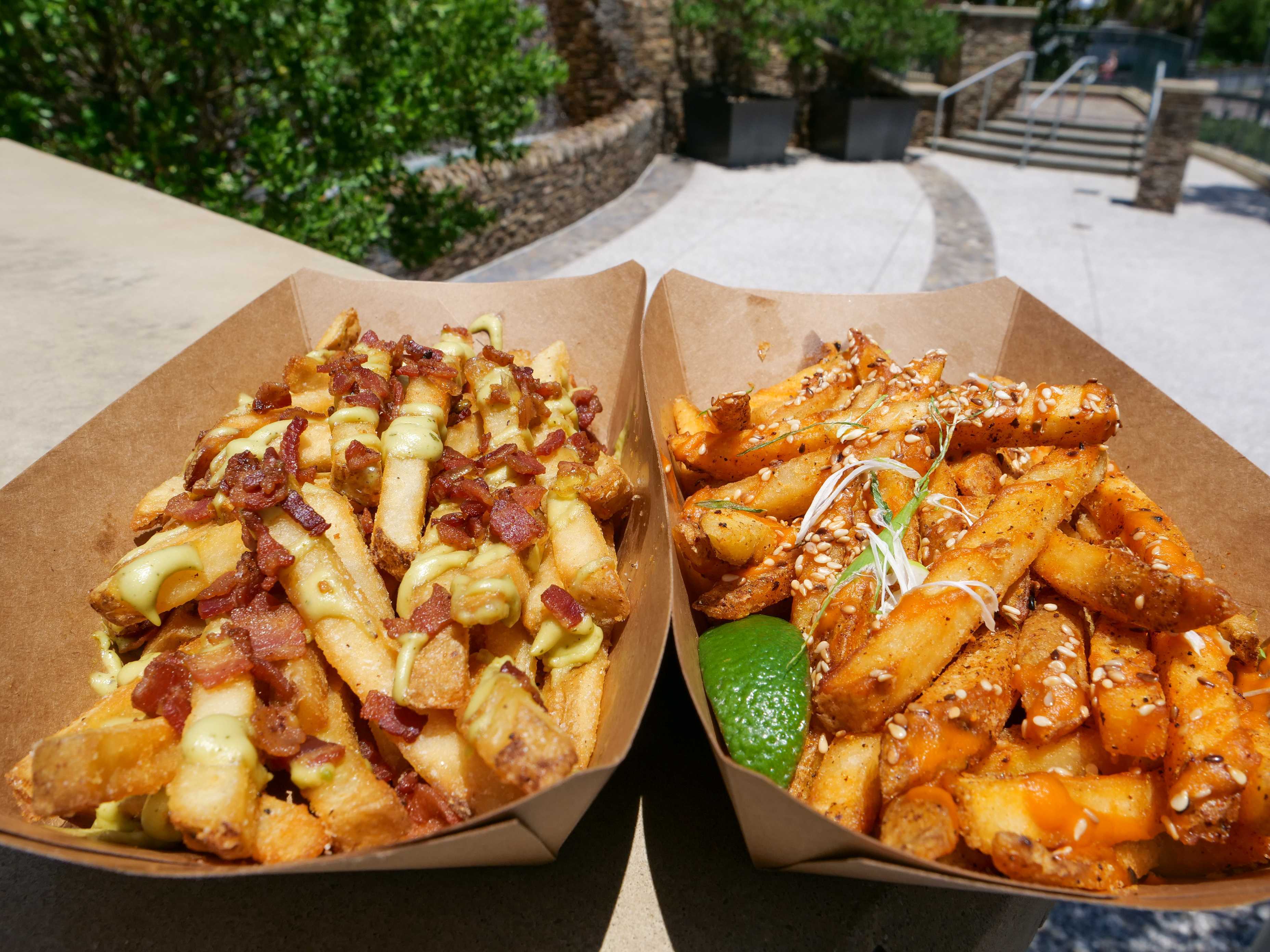 The base of fries is the same for all varieties, so they’re all the same standard square-cut fries, with the same texture. They have a nice amount of crunch, but aren’t overly crispy thanks to a well-fried outer later. This nicely balances the inner potato, which has a good amount of firmness without being hard or stiff to eat. The fries are fairly long averaging, about 3-4″, which is plenty of surface area to hold sauce and toppings. Right off the bat though, these did taste slightly oversalted, especially when combined with the toppings. 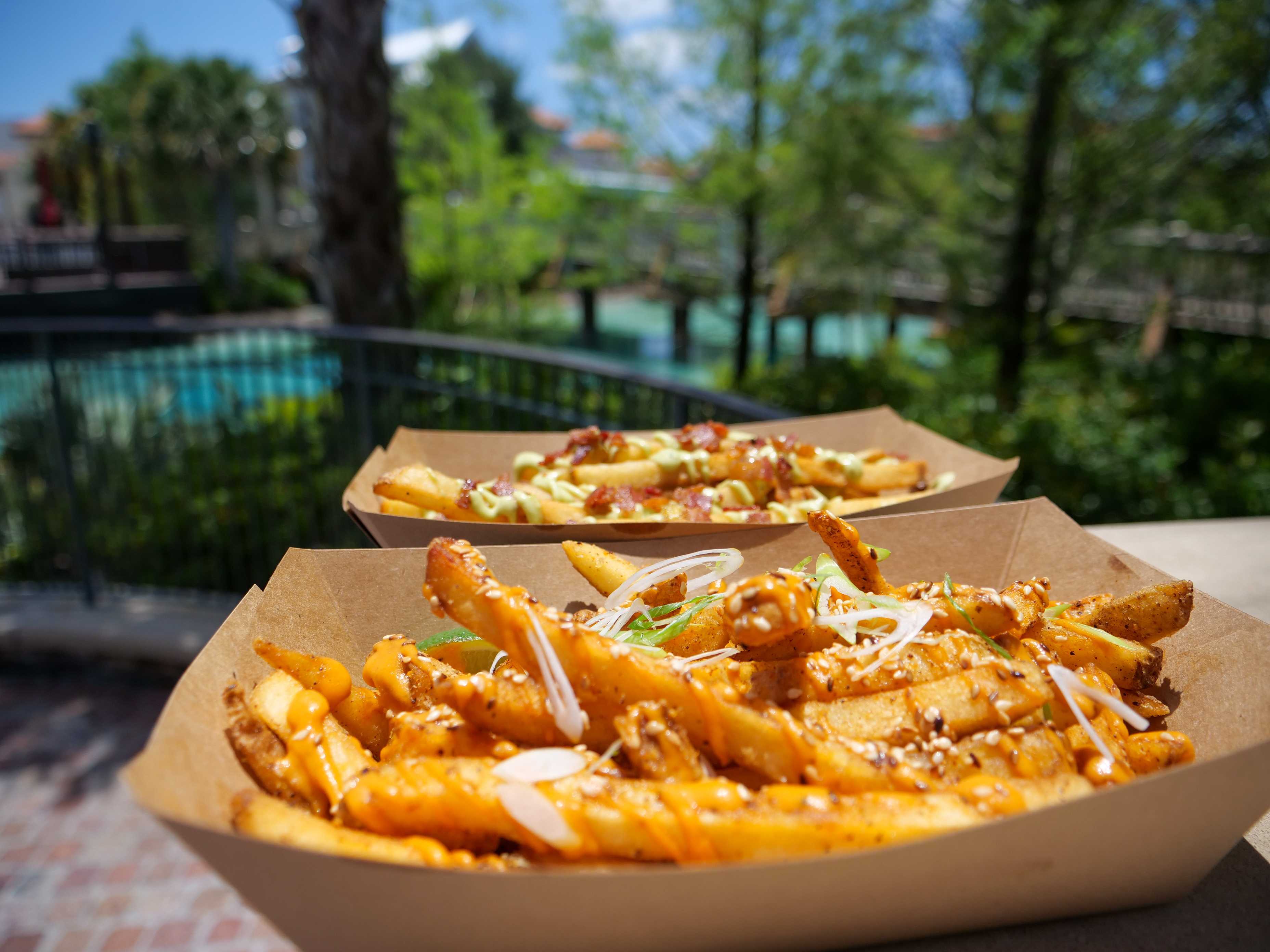 Let’s get into each flavor. 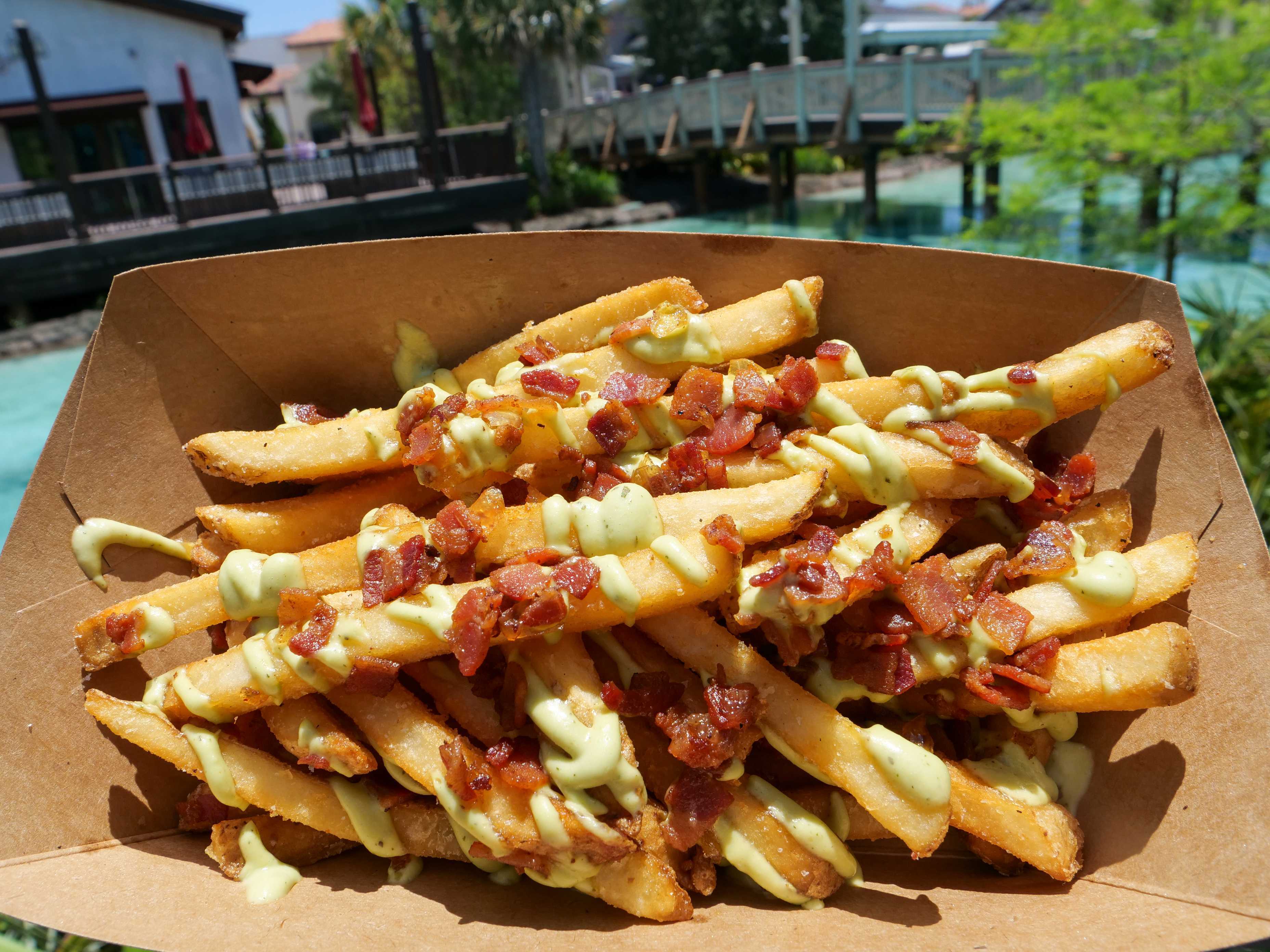 The California has a generous layer of fresh bacon bits. The bacon is fully cooked, and like the fries themselves, has a firm texture without being too crispy. The avocodo crema was applied sparingly to add notes of avocado to the natural taste of the fries. 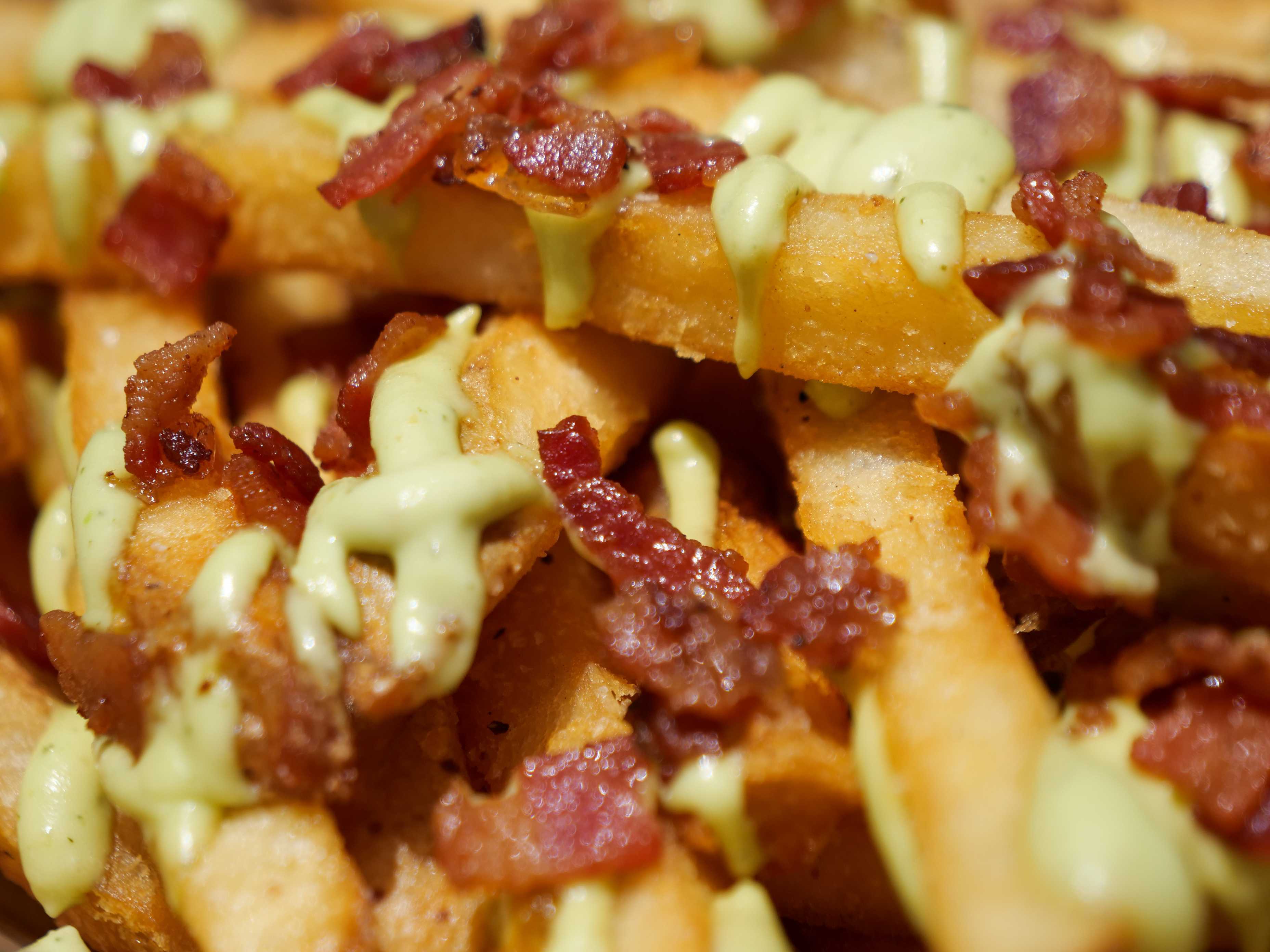 We really enjoyed the crema, however the pickled onions that also top these fries were a bit too overpowering, and didn’t allow the more subtle flavors of the bacon and avocado to shine through. 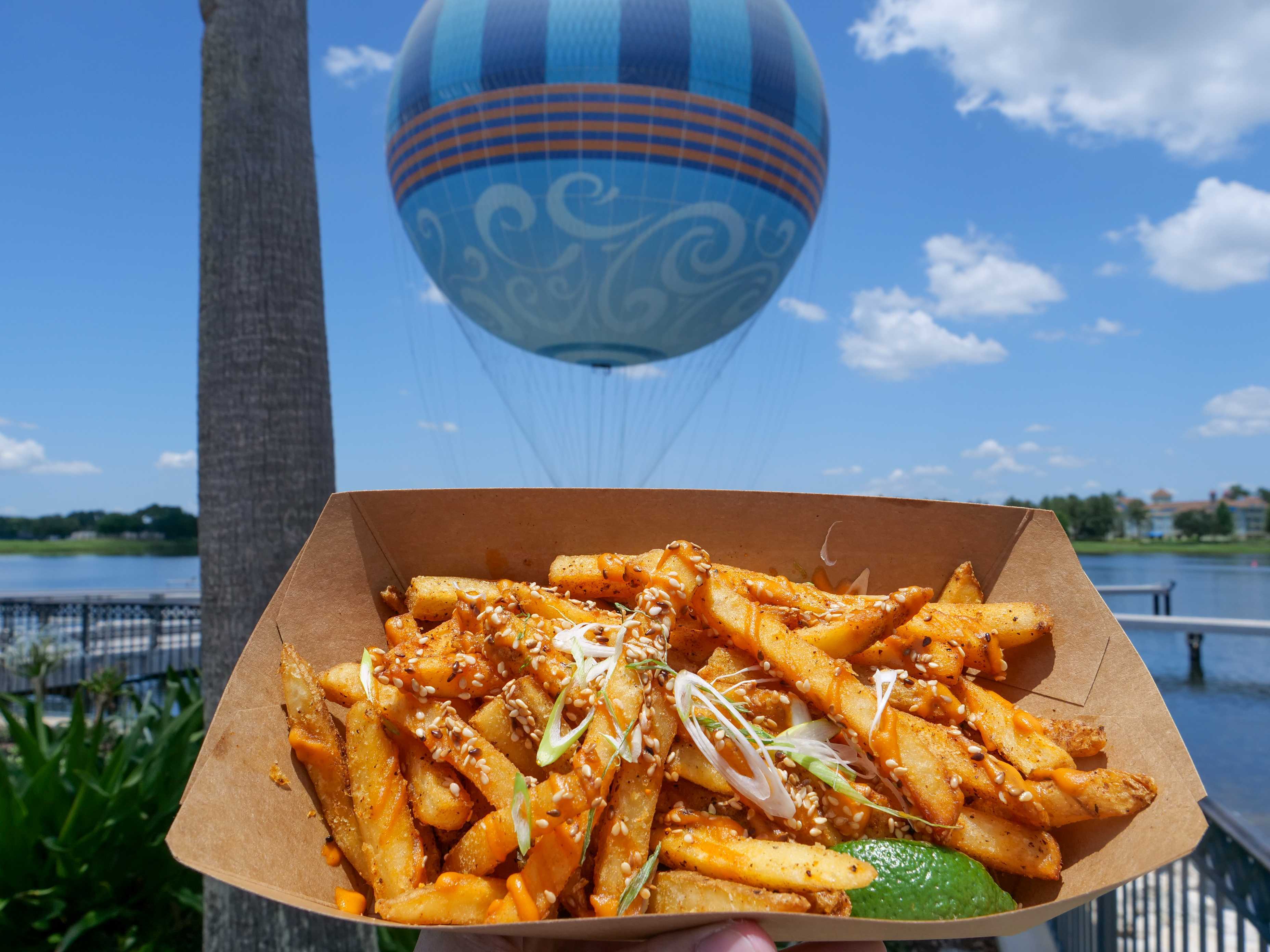 The Togarashi fries are tossed in a house-made Togarashi seasoning blend with give them a little bit of a kick, but are still palatable for those who don’t like much spice. Scallions and lime also accompany the fries, but the Thai chili sauce is what’s most prevalent and a greater portion is topped on these fries than the avocado crema on the California version. 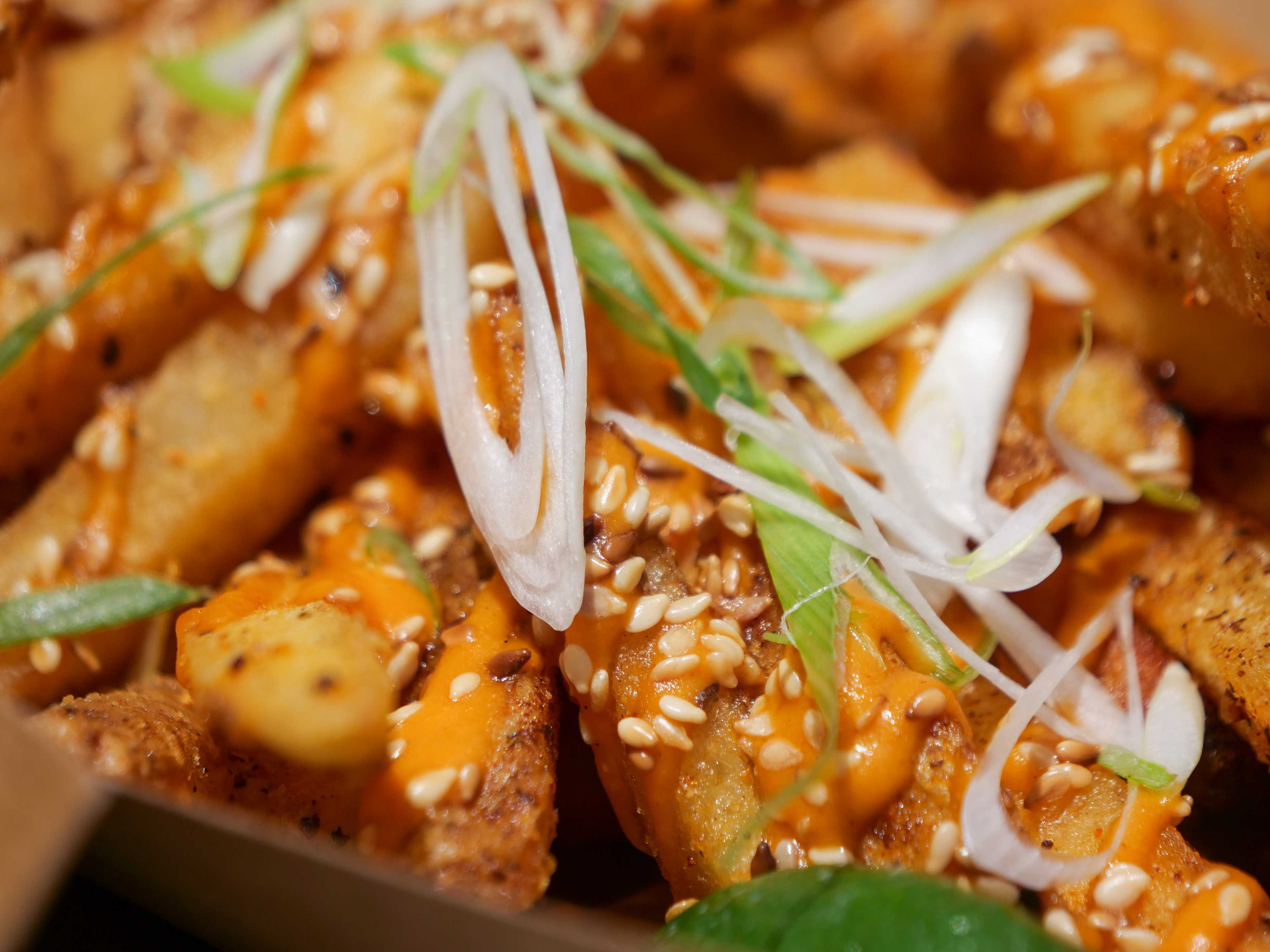 Unfortunately, the Thai chili sauce doesn’t have a lot going for it. It does add some flavor, but overall still leaves the fries feeling lacking. The sauce adds neither significant spice nor sweetness, resulting in a dish that’s a bit blander than we expected. 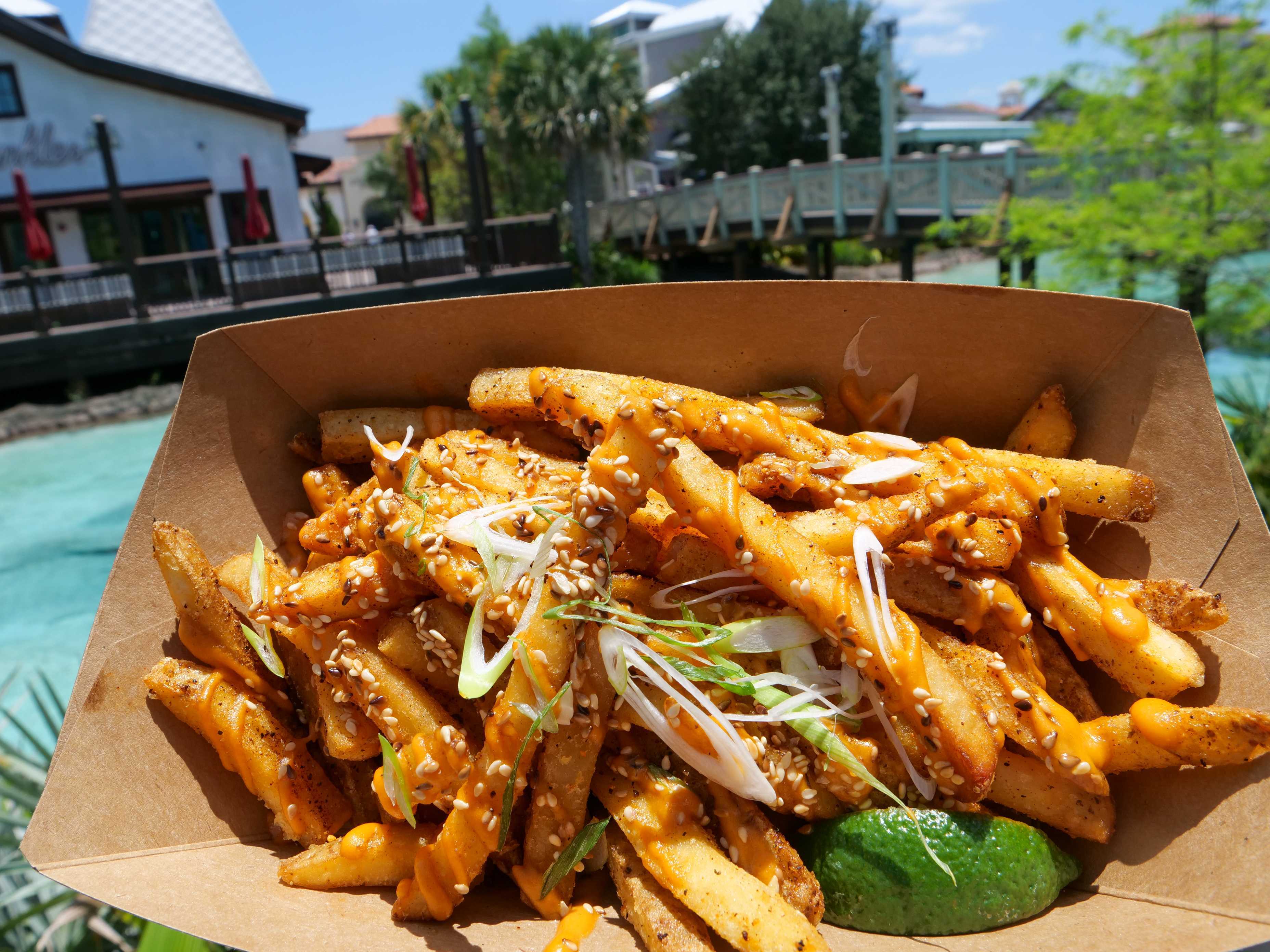 In hindsight, we tried opting for what we believed would be the more interesting of the four options, but probably should’ve gone with the Queso or Buffalo, especially considering the red pepper cheese sauce in the former.

Overall, these new loaded fries present a good value, and the portion size for the money is good. If you’re in the mood for fries and have someone to share them with, we definitely recommend getting these. However, we also recommend asking for a base of unsalted fries, and, if possible, a bit more sauce in lieu of the salt… that, or just grab a Frozcato to help curb the saltiness. You won’t regret having a frosty drink and fries in this heat.