With Disney Parks around the world closed for the foreseeable future, WDWNT is dipping into our archives of vintage parks materials for a look back into parks history! And in celebration of Hollywood Studios Appreciation Week, all this week, we’re peeking into the studio vault with items from the early years of the Disney-MGM Studios! From August 5th through 11th, 1990, stars from the streets, both Jump and Sesame, appeared at the park, as seen in this show times guide! 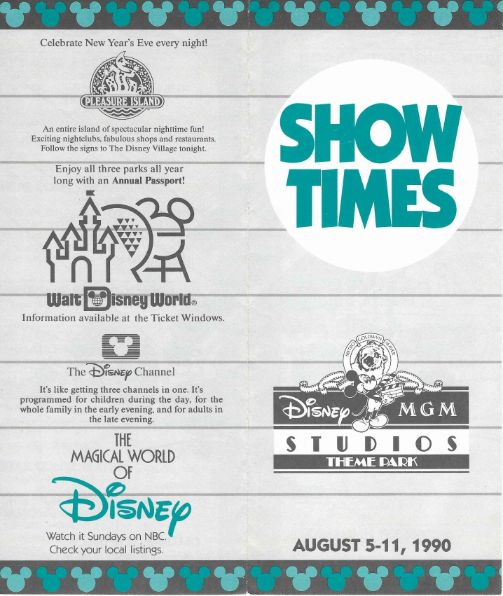 The cover, featuring that classic Studios shade of teal, features the park logo on the front, along with an ad for Pleasure Island, Walt Disney World Annual Passports, and Disney’s television ventures, including The Disney Channel and The Magical World of Disney on NBC. 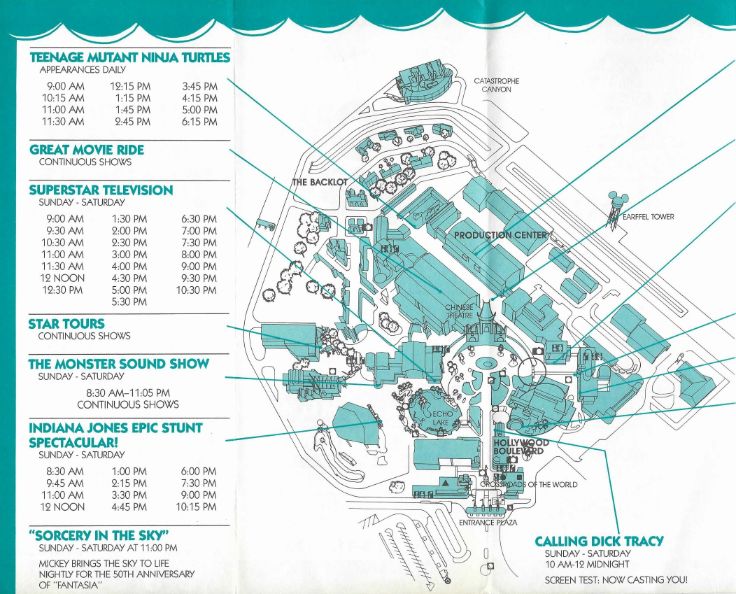 The fun and excitement at the park ran until midnight that week, with plenty of entertainment to offer. The Teenage Mutant Ninja Turtles appeared the Indiana Jones Epic Stunt Spectacular performed twelve times daily, offering plenty of chances for excitement, while Superstar Television ran almost every half hour from 9 AM to 10:30 PM, with a few exceptions at 10 AM, 1 PM, 3:30 PM, 6 PM, 8:30 PM and 10 PM. The Great Movie Ride and Star Tours ran continually throughout the day, joined by the Monster Sound Show between 8:30 and 11:05 PM. If you wanted to put yourself in the middle of “Calling Dick Tracy,” you could do that from 10 AM right until midnight. And at 11 PM nightly, “Sorcery in the Sky” lit up the night to mark the 50th anniversary of Fantasia. 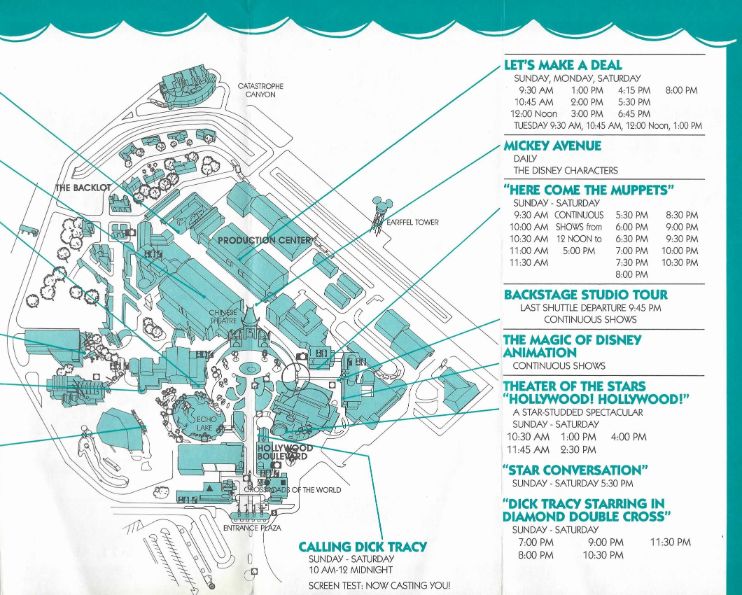 Elsewhere, Here Come the Muppets ran every half hour from 9:30 AM to 10:30 PM, with continuous shows between noon and 5 PM. Running continuously was the Backstage Studio Tour (until 9:45 PM) and The Magic of Disney Animation. Meanwhile, Let’s Make a Deal would run for guests throughout the day on Sunday, Monday, Tuesday, and Saturday, when the show wasn’t taping for television. Perhaps most interestingly in the show times is Theater of the Stars, which ran three different shows a day in repertory, starting with “Hollywood! Hollywood!” in the morning and afternoon, before the day’s “Star Conversation” took over at 5:30 PM, with the evening belonging to “Dick Tracy Starring in Diamond Double Cross.” 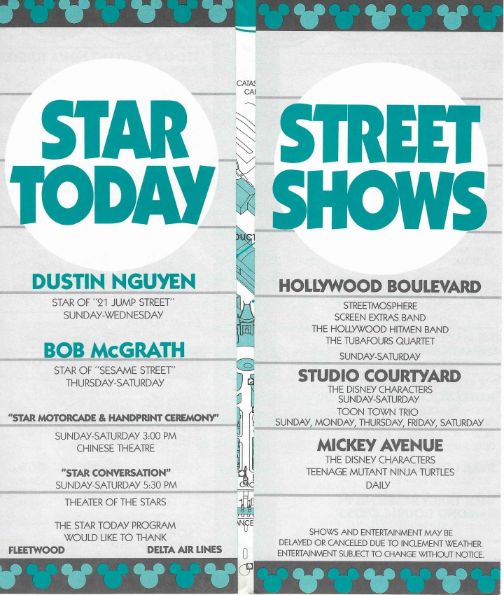 And who were the stars that week? From August 5th-8th, it was Dustin Nguyen, who played Officer Harry Truman Ioki on the hit FOX police drama “21 Jump Street.” For a sunnier side of the street (and a move from network to public television), from August 9th-11th, Bob McGrath, better known as Bob on “Sesame Street,” entertained guests. Nguyen and McGrath would appear daily in a “Star Motorcade and Handprint Ceremony” at 3 PM at the Chinese Theatre, before heading to the Theater of the Stars at 5:30 PM for their “Star Conversation.”

Whether it was a look behind the scenes in the morning, stars in the afternoon, or shows in the evening, there was fun throughout the day at the Disney-MGM Studios!

Next
VIDEO: Take a Trip to Another Dimension – The Complete History of The Twilight Zone Tower of Terror at Disney’s Hollywood Studios