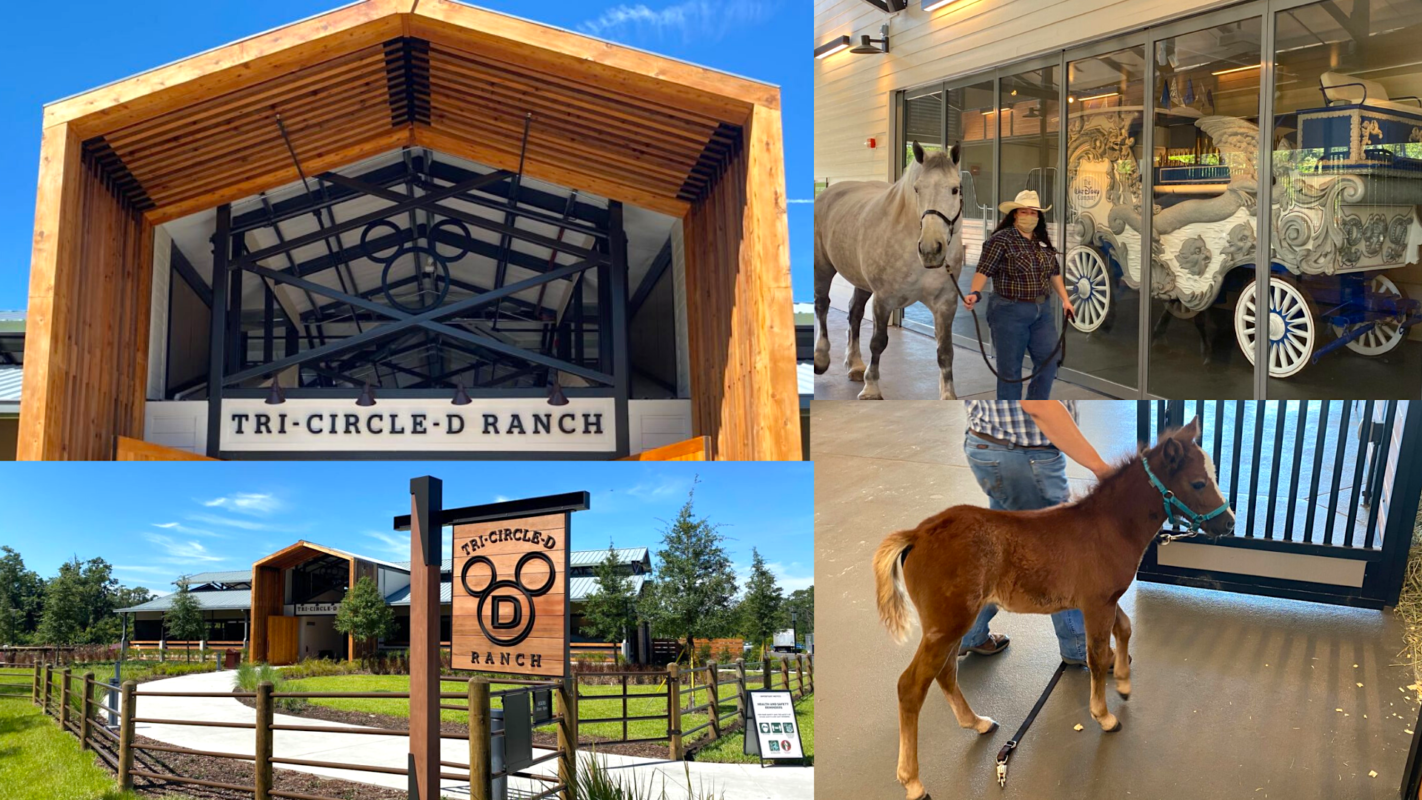 Howdy from Disney’s Fort Wilderness Resort & Campground! Yesterday was a historic day at the resort. Not only did it reopen along with Disney Vacation Club resorts following a months-long closure due to the COVID-19 pandemic, but it also marked the grand opening of the new Tri-Circle-D Ranch!

As we walk from the path from the bus stop near Pioneer Hall, we could tell we were on the right path to the ranch…

… as we saw plenty of horses! Trail and pony rides are currently available for guests.

Just a hop, skip and a trot away, you can find Tri-Circle-D in all its glory.

I love the new entrance, which blends rustic charm with Disney magic.

Be sure to look up to see the Mickey Mouse outline above the sign! The three circles it takes to draw Mickey’s head is how Tri-Circle-D got its name!

Upon entering, it looks like we were greeted by a sighting of one the ranch’s newest residents in Violet, a foal recently born at the stable!

Elsewhere, a horse is led past the new home of a Tri-Circle-D staple: the Dragon Calliope.

The circus wagon made in 1907 was originally purchased by Walt Disney back in the 1950’s for Disneyland’s Mickey Mouse Club parade. It was used in the park’s parades until its 25th anniversary in 1980. The following year, it moved to the Magic Kingdom for its Tencennial, when it was painted silver and blue. It appeared in later parades and Christmas broadcasts until being retired to the ranch’s previous location.

Thankfully, it made the move and looks better than ever!

You can even press a button to hear the calliope’s music. Naturally, we had to press it, and were rewarded with its rendition of “When You Wish Upon a Star.”

With larger stalls and a new home twice the size of the original barn, those sure do look like The Happiest Horses on Earth!

Here you see the entrance to the pony rides.

Just outside are the steps where guests mount the ponies.

The pony trail looks so fresh and inviting!

This appears to be the area where handlers wash the horses, as evidenced by the drains in the concrete.

The Wedding Harness Room features the tack used by Cinderella’s ponies when they parade her carriage around the Magic Kingdom.

This is one roomy barn!

Horses big and small seem to be enjoying the new digs.

Hardcore Disney fans should be sure to make a stop at the exhibit room, featuring items about Walt Disney and his love of horses.

The back of the room features horses and the roles they’ve played at Walt Disney World over the years.

Here are some of the awards the horses have won, including one from the world-famous Calgary Stampede! (Martin Short taught me all about it way back when.)

If you want to see how the horses looked pulling the Dragon Calliope, there’s a neat model.

On the other end of the room, the wall is decorated with pictures of Walt Disney and horses, along with an explanation of the breeds of horses you can find at the ranch.

Trail rides are also open to the public, and our own Pete Carney decided to saddle up!

With a helmet and a mask, he’s definitely putting safety first.

…after the guide calls them, of course.

There’s a hand sanitizing station for guests next to the steps. Between horses and a virus, you can never be too careful.

While we weren’t allowed to take pictures while on the trail ride, Pete enjoyed himself, showing that the new Tri-Circle-D Ranch is a great new home for Walt Disney World’s horse tradition.

1 thought on “PHOTOS, VIDEO: A Tradition is Reborn as the New Tri-Circle-D Ranch Opens at Disney’s Fort Wilderness Resort & Campground”