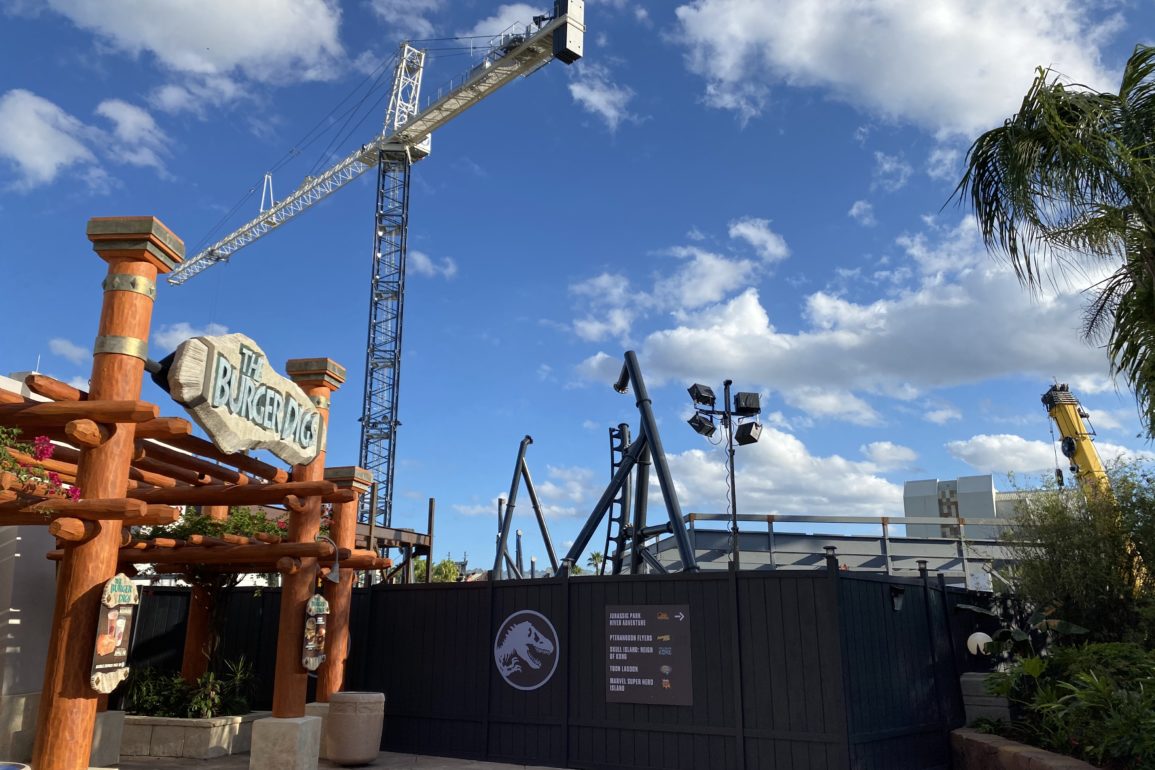 It doesn’t take a highly-evolved, cleverly engineered raptor to realize the massive development going on at the very heart of Universal’s Islands of Adventure. Despite no announcement from Universal Orlando Resort, guests and coaster enthusiasts alike are flocking to some of the park’s best hidden vantage points to catch a closer look at the rumored “Velocicoaster” taking shape just outside the Jurassic Park Discovery Center. We’ve covered some of the latest installations, including a barrel roll right over the water, and even an oscillating helix, and today we’re taking a look at a new, massive triangular support taking shape, as well as a new piece of track that’s jutting out from over the construction walls.

To get the best overall sense of the span of construction, we take to the overlooks along the edge of Seuss Landing. Here, you can see the main show building areas off to the left, which is also where those two large triangular supports have been erected. The coaster then skims along the water and across the lower half of the Discovery Center, before reaching some tight twists and turns along the edge of Hogsmeade on the right.

Here’s a closer look at the two triangular supports. If you look towards the back, these seem to be congruent with a third large support closer to the center of Jurassic Park. Track will be installed along the connectors that extend out of these supports.

Just before you reach Jurassic Park, you can see where the coaster track invades the views of the outdoor seating area of Three Broomsticks. A retention wall has been built alongside the water during construction.

Construction is apparent right as you pass the Jurassic Park arches, with a new building being built alongside the entrance path. We’ve come to jokingly call this sight “John Hammond’s revenge”, since Hogwarts ruined the skyline in his park, not to mention the Forbidden Journey extended queue, which is basically in Site A.

One of our favorite hidden viewing areas is a walkway leading to a smoking area, which is also where the Jurassic Park Jeep (the one from the old photo op) has been quietly relocated during construction.

Things get interesting once again right outside of the Jurassic Park Discovery Center, where construction walls line the very edges of The Burger Digs. The load/unload and entrance/exit of the new attraction should be somewhere in this vicinity, which now sports a fresh new piece of track.

The piece of track seems to jut out perpendicularly from the ground.

Of course, we expect to see additional track installed along the support connections in the coming days.

The views from the still-shuttered Pizza Predattoria include an array of cranes and lifts.

Many are suggesting that this structure may be some kind of dinosaur figure, due to its odd shape, but it’s too early to tell at this point. In the back, you can see the concrete walls of a show or maintenance building in progress.

Another odd place offering incredible views of the “Velocicoaster”? Toon Lagoon. The pathway lining Popeye & Bluto’s Bilge-Rat Barges edges right along the water, so you can get an even closer look at the tracks and supports.

Here’s a look at the new tower support, albeit at a different angle.

Do note the interesting set of three connectors at the middle of the new tower support.

When fully completed, the roller coaster will be transporting guests through these tracks at speeds of up to 70 miles per hour…

…however, it will come at the cost of losing thematic integrity at a number of impacted lands throughout Islands of Adventure.

Are you excited for the newest thrill ride speeding into Universal’s Islands of Adventure? Stay tuned to WDWNT for more updates as the attraction construction continues.