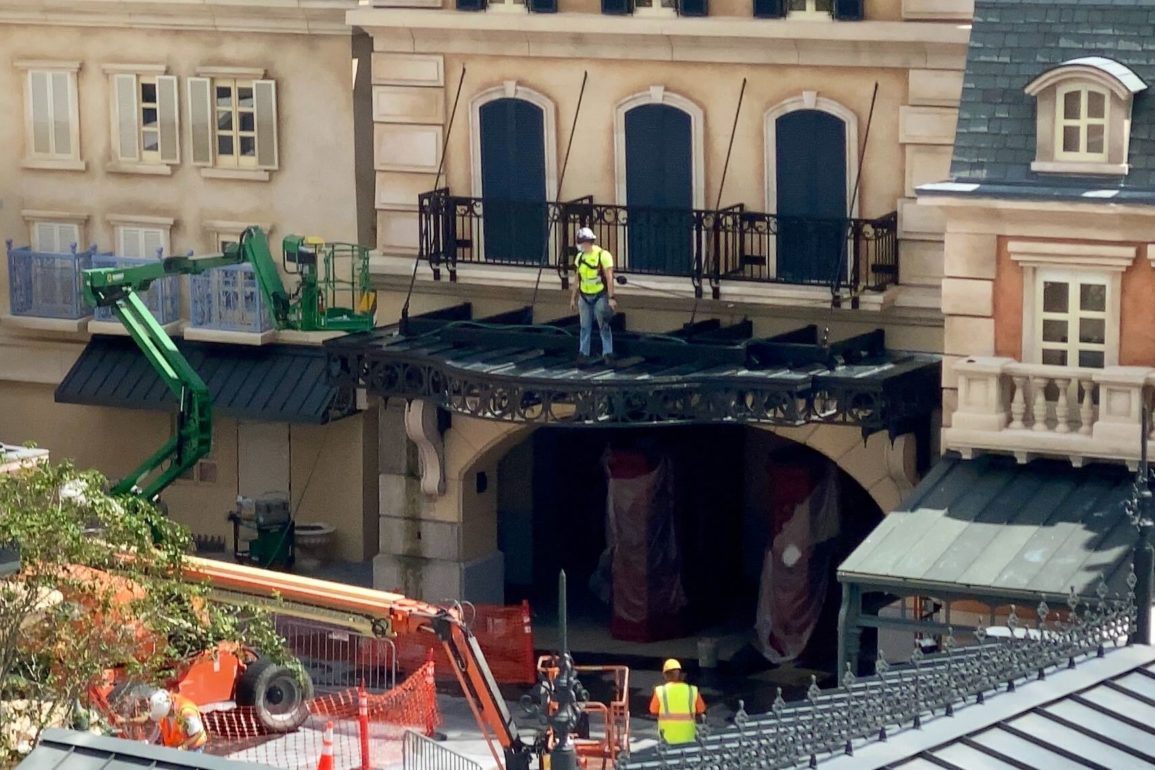 It’s another beautiful day at EPCOT, which means it’s the perfect time to ride the Disney Skyliner and get a good look at the France Pavilion expansion. We checked out the pavilion two days in a row to see what progress was made.

Landscaping continues to be filled out in this courtyard area.

The main road leading to Remy’s Ratatouille Adventure is getting a more detailed look.

There were plenty of workers on site today.

One worker was above the entrance to the future Ratatouille attraction.

It looks like they are preparing to install signage above the entryway. The faux balconies have been painted black.

Inside, some plastic wrap is visible around interior structures.

This covered area seems to be an overflow queue. It looks like workers were cleaning it up.

This backstage area has been paved since we last saw it. Certain emergency vehicles will likely need access to this area, plus it’s nice to get a clean view from the Skyliner.

Though partially obscured by trees, Spaceship Earth is visible from here.

When we were heading back, the worker had left the awning area above the attraction’s entrance.

Near the new restrooms, filming appeared to be happening with one of the Imagineers on the project.

This could mean that we’ll be getting an up-close behind-the-scenes video from the construction site soon.

Workers on a cherry picker on the main road seemed to be checking on the trees or preparing to do some work on the blue building.

The pathway leading into the expansion now looks almost completed, with no signs of construction.

Though you can’t see it from this angle, the sign in this archway was recently updated once again.

On our next trip, we got another look at a worker to the side of this pink building.

No new signage has yet to be installed.

One worker seemed to be taking a nap in the fountain and we don’t blame them.

No major changes were made to the main road overnight, but one worker was inspecting the pavement.

Beyond Remy’s Ratatouille Adventure, this expansion will also include La Creperie de Paris on a street corner.

Since the courtyard is filled with construction equipment, it’s hard to get a good look at what is going on. But it’s safe to say the expansion is making some major strides towards completion.

No opening date has been announced for the expansion and Remy’s Ratatouille Adventure, though it was originally set to open this past summer. It’s likely that Disney is still planning on opening the expansion this year.

Are you excited to walk through the France Pavilion expansion at EPCOT? Let us know in the comments.