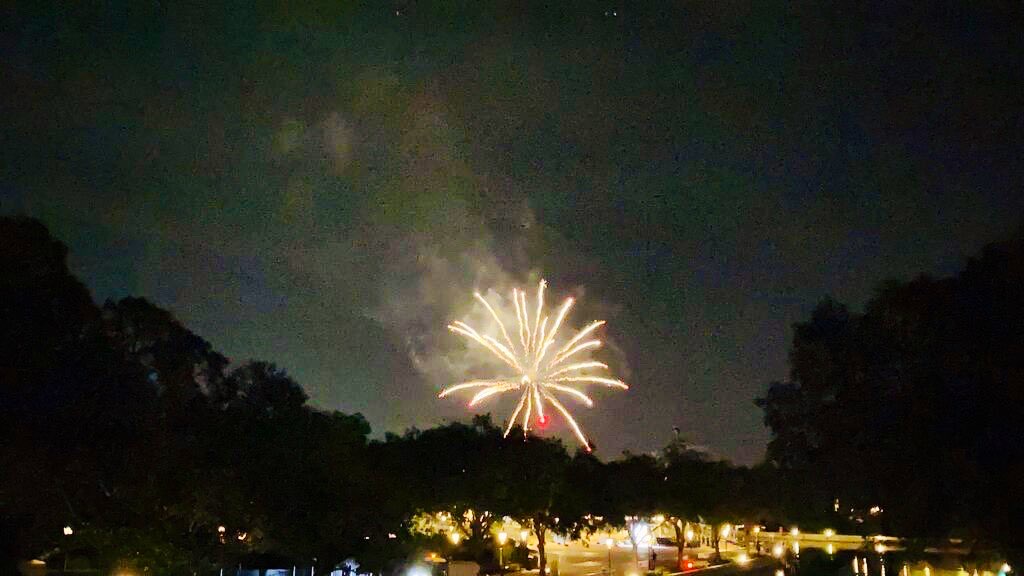 Tonight, the very first fireworks were launched at Walt Disney World after the COVID-19 shutdown. Part of a fireworks test at EPCOT, it’s unknown whether this was tied to the new “Harmonious” nighttime spectacular, the upcoming return of fireworks to the parks, or just basic show maintenance—but in any case, it was a true sight to behold for onlookers staying near Crescent Lake.

We took a position on the bridge over the waterway connecting Disney’s BoardWalk Inn to the International Gateway.

A lone boat came from World Showcase Lagoon. It quickly turned back.

The fireworks testing began around 9:12 PM, with elements launched in 2- to 4-minute intervals at first, waning off as the hours passed. No discernible music could be heard from the bridge.

By 10:00 PM, most of the more impressive high-burst fireworks had been launched, with the next half-hour being mainly low-lying launches and bursts that could barely be seen over the foliage.

The test came hours after show crews were seen photographing areas around World Showcase Lagoon. In the past few weeks, we have reported on “Harmonious” barge construction and the removal of the scrim from the show’s control center.

An opening date for “Harmonious” is still unknown after suffering delays during the COVID-19 pandemic closure. At this time, nighttime spectaculars are suspended indefinitely due to strict health and safety guidelines.

Is this news getting you excited for the “Harmonious” nighttime spectacular? Use the comment feature to tell us just how excited you are, and stay tuned to WDWNT.com for continuing coverage of “Harmonious” and other construction projects at Walt Disney World.