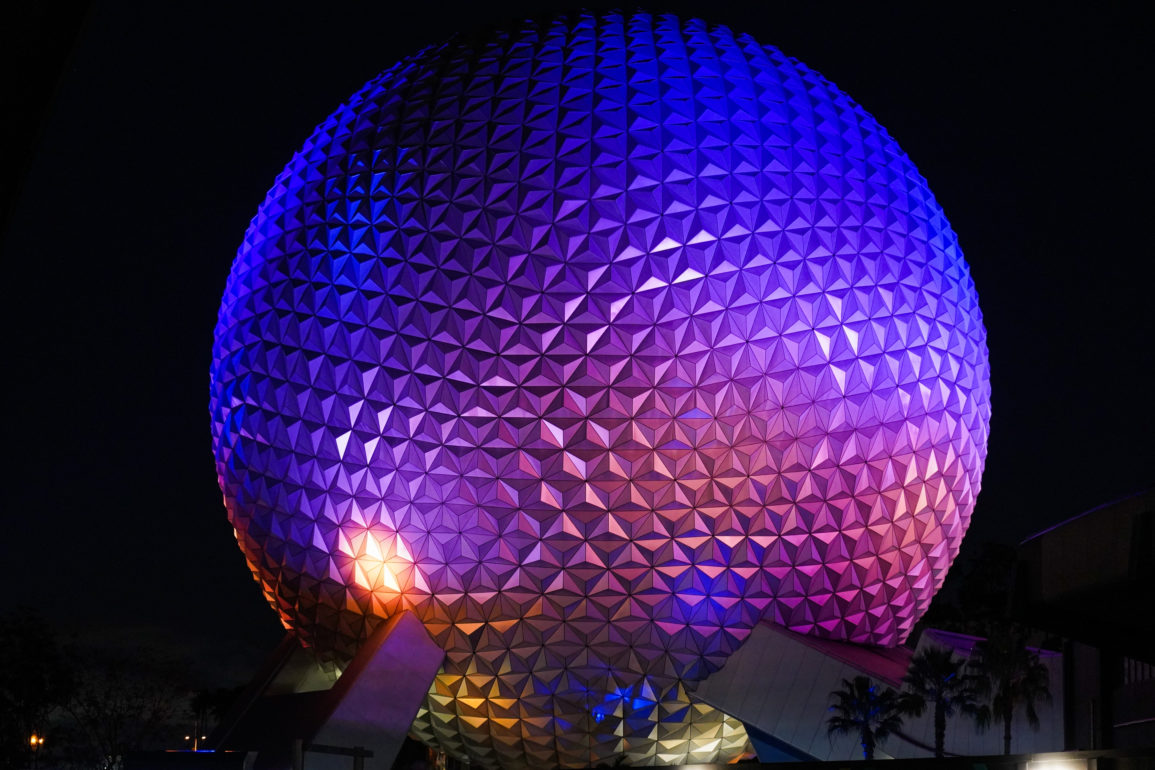 Hello from EPCOT on yet another busy weekend! Now that The Walt Disney Company has broken the silence and admitted to an increase in park capacity, the slowly increasing crowds have a bit more of an explanation. Despite the number of guests in the park, there are still plenty of updates and developments from the park — let’s take a look at what’s new.

At the front of the park, most of the new fountain is still hidden behind construction walls, allowing little more than the Lucite pylons to be seen from the ground. Thankfully, we have an update on the entrance plaza from the air, giving us a better look at the status of the project.

Guardians of the Galaxy: Cosmic Rewind has seen slow progress as of late, despite a recent sneak peek at the attraction’s ride vehicles.

Much like the rest of the attraction, the Xandarian Nova Corps ship which will eventually be perched out front has seen little movement in the two-and-a-half months since scrim was hung around its foundation.

While situated only steps away from Guardians of the Galaxy: Cosmic Rewind, the progress on the exterior of the Play! Pavilion was quite different, making large amounts of progress in a short time as nearly all of the roof panels were replaced. Since that time, though, little visible work has occurred.

Outside of the Imagination Pavilion, lighting rigs have been added to illuminate the area where Joy from Inside Out and Winnie the Pooh both frolic throughout the day — more on that later.

At the nearby Innoventions West, demolition continues to creep along after half of the structure was completely dismantled at the beginning of the year.

On the East side, work has been a bit more moderated as bits and pieces of the former Mouse Gear and Electric Umbrella locations have been slowly removed since the project began.

On the topic of Mouse Gear, EPCOT’s major retail shop has added yet another Mandalorian-themed item to their shelves — this set of PEZ dispensers. Naturally, the pair of dispensers includes a variety of the namesake candy to load up your new dispensers with.

Over at The Land Pavilion, some changes have occurred to the queueing process outside, with a more structured line set up in the area normally reserved for stroller parking.

This has resulted in the removal of the snake-like portion of queue from the walkway into the pavilion, which generally resulted in guests racing in a zig-zag fashion versus a useful portion of a line.

Inside the pavilion, Living with the Land has made huge strides forward in the installation of its Christmas overlay. Guests are now able to get into the winter season from the comfort of a greenhouse.

In World Showcase, specifically the Mexico Pavilion in this case, crowds and lines were both sizable in the same vein as The Land Pavilion.

At the France Pavilion expansion, lines and crowds are not a part of the landscape — yet. With rumors swirling of a ramp-up to the opening of the new area early next year, swarms of guests will be part of the reality of these now-quiet Parisian streets.

Nearly all of the finishing touches have been added to the expansion, supporting the notion that guests may soon be welcomed to walk down the cobblestone and have a crepe or two.

Outside of the France Pavilion, character cavalcades continue to make their way around the lagoon on a regular basis.

As the sun begins to set, Spaceship Earth is covered in an orange glow – one of the three looks for the iconic sphere during our visit today.

The sun setting also meant checking in on the new lighting for the Imagination Pavilion character engagements.

Once daylight had vanished, Joy could be found prancing around the former butterfly garden with only the new lighting to illuminate the area. As the park had a late 10:00pm closing time, lighting either needed to be added or characters would not be part of the EPCOT experience for the last 4 to 5 hours of the night.

Rounding out the evening, Spaceship Earth was also coated in nothing more than colorful, artificial light as we made our exit. Considering the recent days when EPCOT after dark wasn’t an option, these are welcome changes to the Walt Disney World landscape.

Thanks for joining us at EPCOT today! With all of the rapid changes to the parks — increasing capacity, but also expanding hours and options — is it a worthwhile trade off for you? Do you think longer lines and larger crowds are worth it to have more time in the parks and more of the amenities you’re accustomed to? Let us know in the comments!