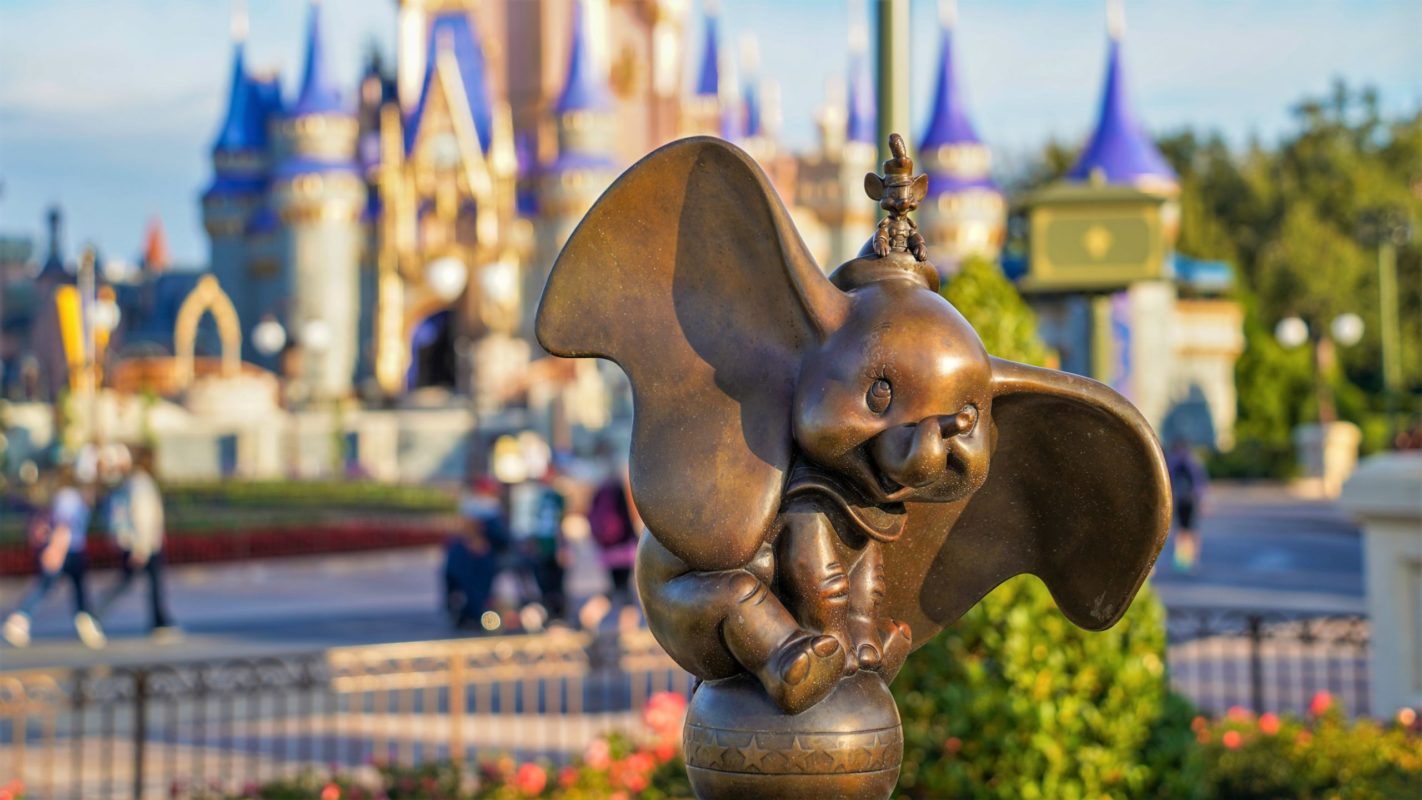 Welcome to the Magic Kingdom! Unlike our adventures through a waterlogged park yesterday, the weather is absolutely perfect today — the sun is shining with a high temperature of 76 degrees. It’s not all good news, though, as today marks the conclusion of Sorcerers of the Magic Kingdom’s run for almost a decade in the park.

Cinderella Castle made for a beautiful sight in the sunshine this morning — its burnt pink hue notwithstanding.

After the unpleasantness of yesterday’s weather, we decided to take a few moments to appreciate some of the beauty and details of Magic Kingdom that are sometimes overlooked, such as this fountain in the hub.

There are no shortage of other details around the central point of the park.

Moving on to Tomorrowland, today was unfortunately not the day for the Tomorrowland Transit Authority PeopleMover to return to service. While the refurbishment is currently scheduled through late January, we can always hope for work to be completed a little early.

In the same vein as the PeopleMover, TRON Lightcycle / Run is also subject to some rolling delays as its initial opening date has seemingly been abandoned.

Bonjour! Village Gifts, like TRON, didn’t see much in the way of progress since yesterday as crews tend to have the weekends off as of late.

Despite the lack of weekend construction and refurbishment work in the parks, the Rivers of America have continued to fill with water as the refresh enters the home stretch.

In our mode of appreciating the park when we aren’t getting rained on, we also stopped to enjoy Splash and Big Thunder mountains in the morning sun.

We also enjoyed a moment outside of Beast’s Castle, and pondered how nice it would be if this area was more than a pricey restaurant — even if it’s a good restaurant.

At the Emporium, new pet merchandise which is not part of the recent Disney Dogs & Cats collection has appeared in the Emporium. These Mickey-themed items were available on shopDisney during the park closures, but have finally made it into stores.

Perhaps even cuter than dogs and cats — or at least on par — are these new Wishables keychains which features imagery from The Haunted Mansion, Pirates of the Caribbean, Dole Whip, and Frozen.

Back in Frontierland, Tinkerbell made her way out as part of one of the many cavalcades which can be found at the Magic Kingdom.

On Main Street, some of Winnie the Pooh’s associates could be found on a trolley as part of the ongoing “Fantasyland Friends” cavalcade.

Another “oldie but goodie” cavalcade, if six months counts as “old”, is “A Goofy Cavalcade” which continues to run regularly throughout the park.

Unfortunately, today marks the end of a far more long-standing piece of the park than a mere cavalcade, as Sorcerers of the Magic Kingdom marks the end of its quest. Many guests, from individuals to large families, participated in the attraction today. We can only hope that something equally unique will take its place, though considering the current Disney management Sorcerers will most likely be replaced with… nothing.

We hope you’ve enjoyed our much drier journey through the Magic Kingdom today. We’ve bid farewell to Sorcerers of the Magic Kingdom, but what do you think will replace this unusual interactive attraction? Let us know your thoughts for what could — or should — take its place in the comments!

RUMOR: EPCOT’s Play Pavilion Will Not Be Mentioned at D23 Expo, Attraction Either Cancelled or Scale...September 5, 2022
Out of the Wild Turned Into Seating Area at Disney's Animal KingdomFebruary 25, 2022
Animated Mickey Snow Wand and Glow Necklace Available for the Holidays at Disneyland ResortNovember 2, 2022