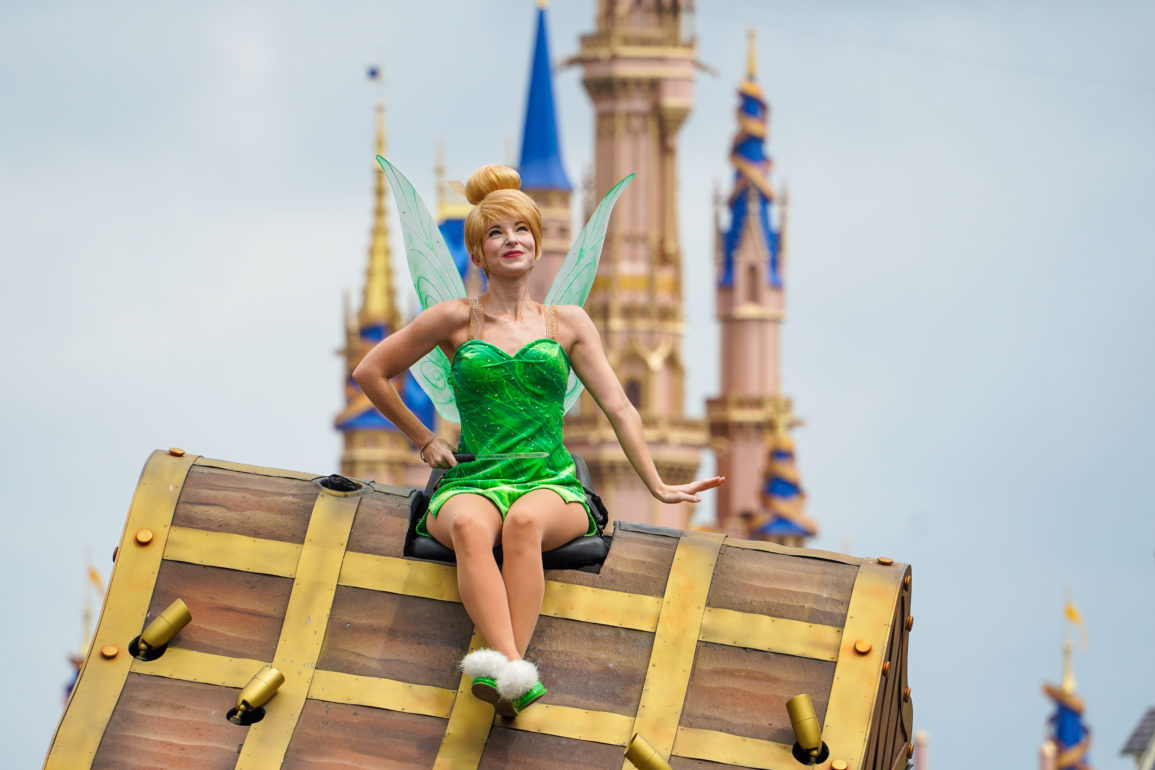 Royal greetings from the Magic Kingdom! While it’s yet another sold-out day, we’re on the tail end of Spring Break and the “capacity” crowds seem to be slowly dwindling. We’ll be taking a look at a few of the ongoing projects in the park and finding anything else that may be new.

It started out as a gloomy morning, with a light mist dulling Cinderella Castle, whose transformation for the 50th Anniversary is nearly complete.

Similarly, Cinderella Castle Stage is reaching the latter stages of its refurbishment as layers of surfacing are added.

In the adjacent Fantasyland, guests nearly entirely circled Seven Dwarfs Mine Train in an effort to ride the attraction before the line got even longer later in the day. This plan wouldn’t work out so well for many of them, though.

Over at the Jungle Cruise, we’re still missing two key elements on the shores of the various rivers. While Trader Sam’s departure will be permanent, his replacement has yet to appear — in whatever form that may be.

This week’s removal, the “Trapped Safari” rhino pole, still has only crates in the pole’s place. Unlike Trader Sam, the vertical scene is expected to return, albeit slightly modified.

We’ve got a variety of projects to check on in Tomorrowland.

Tomorrowland Transit Authority Peoplemover, while running for much of the day, still hasn’t shown any specific signs one way or the other about how imminent its reopening may be.

Refresh work on Cool Ship continues, though many elements are still in rough shape.

Inside Tomorrowland Light & Power Co., merchandise is appearing that is focused on the original trilogy of Star Wars, taking a break from the newest trilogy and Mandalorian-focused items which have overwhelmed the parks lately.

TRON Lightcycle / Run continues to make achingly slow progress, with little to show for the past week of activity.

Heading back to Main Street U.S.A. and popping into Emporium, we found this Up-themed cookie jar, which joins a similarly substantial Cinderella Castle jar.

Over at Storybook Circus, there wasn’t any overnight work on the repainting of Dumbo the Flying Elephant, but we took a close look at the attraction’s sign ahead of an expected replacement. Given the significant damage to the sign, a total overhaul is in order.

Back at Seven Dwarfs Mine Train, the attraction was down from about 8:00 AM (the park’s official opening time) until nearly 10:00 AM, hence the thwarting of guests’ plans that we mentioned earlier. Some guests still opted to wait for its reopening, however.

At Peter Pan’s Flight, the sign has yet to return since its removal a few weeks ago.

The themed scrim surrounding much of the attraction’s exterior has also not changed, and it has now been up for a month and a half.

Back on Main Street, we were able to catch some of the park’s entertainment. Here, the Dapper Dans made a loop of the Hub as they performed their signature melodies.

Tinker Bell also made her way down Main Street, with an updated Cinderella Castle in the background.

Finally, Cinderella Castle was far more visible and vibrant later in the day than it was in the early hours. Whether or not all of the recent additions and changes are seen as positive is a very personal preference, though.

We hope you’ve enjoyed our trip around Magic Kingdom today. Be sure to check in regularly with WDWNT for all of the latest news and updates from the Disney parks around the world.