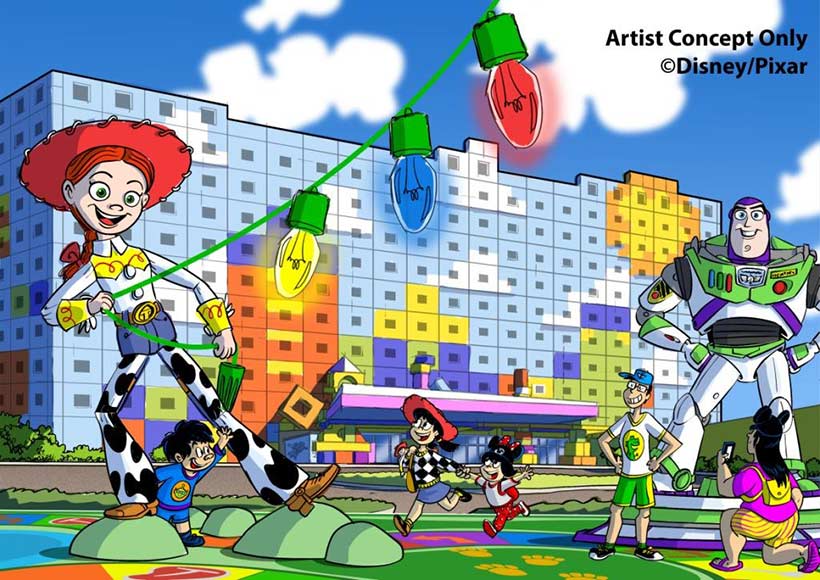 Over the past year and a half, we’ve slowly watched the Toy Story Hotel rise above the Bayside area of Tokyo Disney Resort, but with no word from the Oriental Land Company on its intended design or official name, until today! Today, the Tokyo Disney Resort operator released official concept art for the hotel, opening in 2021, as well as revealed the official name!

The new hotel will be dubbed simply “Toy Story Hotel”, and will open as planned in 2021 as Tokyo Disney Resort’s first Moderate-class hotel. The hotel is located at Bayside Station on the Disney Resort Line monorail, sandwiched between the Hilton Tokyo Bay and the Hotel Okura Tokyo Bay.

Our most recent trip to visit the construction site pretty much matches how the hotel appears in concept art.

The Toy Story Hotel is set to be the second of its kind, following the iteration that opened in 2016 at Shanghai Disney Resort, and the fifth Disney Hotel in Japan. The hotel has 11 aboveground floors and one basement, hosts 595 guest rooms, and is an approximately $285 million investment by the Oriental Land Company.

Are you interested in staying at the Toy Story Hotel after it opens this year? Or will you stay away due to its rather… distinctive appearance? Let us know in the comments below!