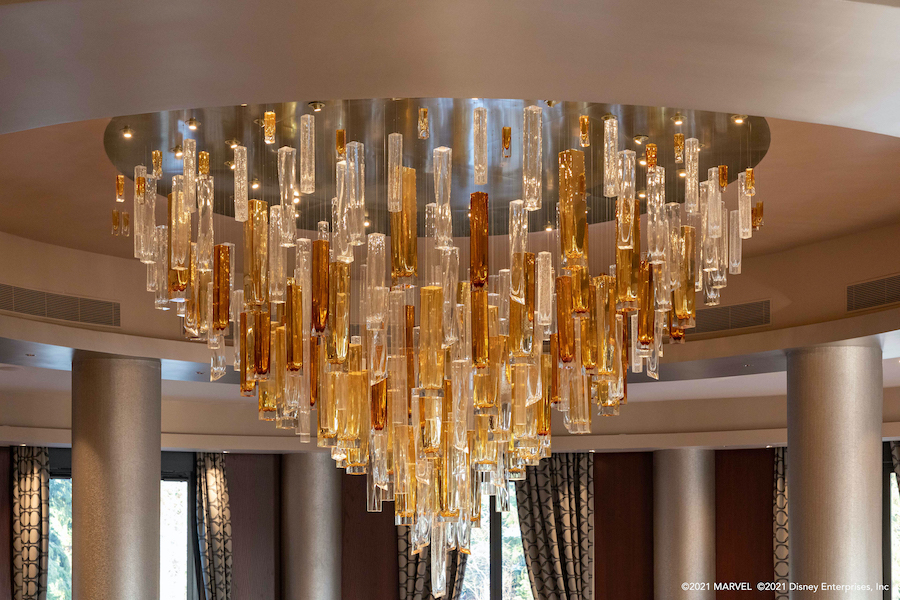 On June 21, guests will be able to enter Disney’s Hotel New York – The Art of Marvel in Disneyland Paris for the first time. The hotel has been reimagined to be dedicated to the artwork of Marvel, including comics and films.

Among the hotel’s amenities is the Manhattan Restaurant, where guests will be able to admire an impressive chandelier inspired by Thor’s planet, Asgard, which also aludes to Manhattan skyscrapers. Disney Parks Blog spoke to Sylvie Massara, Art Director at Walt Disney Imagineering Paris – Design & Show Quality, and Thomas Muller, Scenographer, to learn about the chandelier.

According to Massara, the team sought out vendors with expertise in working with metal and glass, identifying several in Prague, Czech Republic, the worldwide home to Bohemian crystal craft. They ultimately partnered with Lasvit. Each component of the chandelier was traditionally glass-blown in Bohemian crystal glass in champagne, amber, and light crystal colors. Each component is also silver-plated from the inside with pure silver. The chandelier is four meters tall, has more than 225 glass pieces, and took a year to create.

Muller explained that in order to hang the chandelier, the ceiling had to be reinforced. A metal structure was integrated into the concrete slab and the air conditioning had to be rerouted.

Previous
PHOTOS: Scaffolding Erected Inside Theater of the Stars, Home to Beauty and the Beast at Disney’s Hollywood Studios