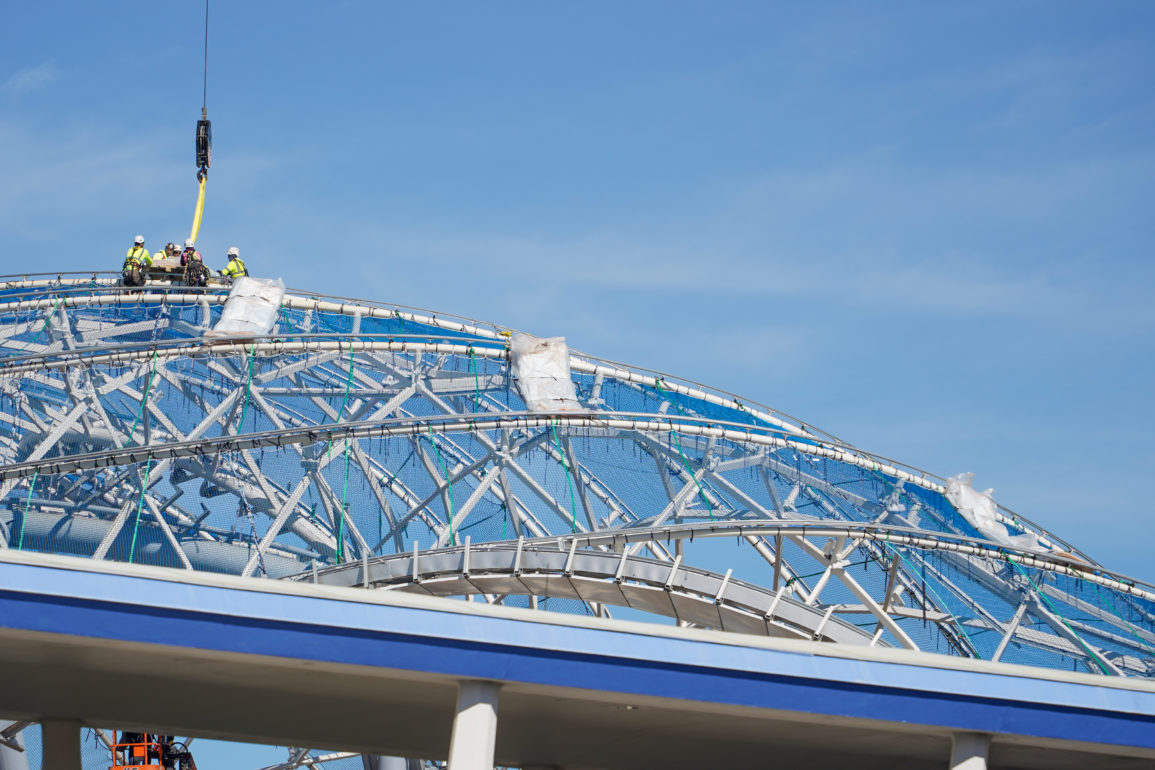 Good morning from Magic Kingdom on what will surely be one of the coldest days of the year! We’re starting out the day at a chilly 35 degrees, but thankfully with plenty of Florida sunshine to warm things up later in the day. There’s also a lot going on inside the park to keep us on our toes.

First thing this morning was the official release of Vault Collection 1970s vintage map merchandise at Main Street Cinema. The Spirit Jersey was accidentally released early last week when we found it at the Contemporary Resort.

In addition to the Spirit Jersey, a new Harveys bag was released with some amazing art on both sides as well as a lot of fun details throughout.

The Crocs sported similar art to the Spirit Jersey and Harveys bag but also included their own unique accents. Check out our post on these beauties for all the details.

Amidst all the hustle and bustle for the vintage map items, a new Vault Collection hoodie was released. If you’re looking for something a bit tamer than the map Spirit Jersey, this jacket may be more your style.

Next door at Uptown Jewelers, a new Dooney & Bourke ‘Alice in Wonderland’ collection was released. The set includes a total of four items, ranging from a wallet to a tote.

Finally, making our way past Main Street, in Tomorrowland we saw a huge milestone taking place — the first stages of the roof installation for the TRON Lightcycle Run canopy. The massively delayed attraction has finally been making steady progress for the last few months.

In Frontierland, a stage has been set up for a Cast Service Celebration scheduled to take place on January 25, the reason for the park closing at 4:30 p.m. that day. The event ended up being canceled due to inclement weather, though.

At Splash Mountain, work continues on the attraction’s annual refurbishment. While major changes to the attraction for cultural sensitivity reasons are coming, this work is unrelated.

While Splash Mountain may be delaying its transformation, cultural sensitivity changes appear to have been made at nearby Tom Sawyer Island. The rafts previously featured the names of four characters from the Mark Twain novel—one of which contained a racial slur. Cast Members were unsure what, if anything, would replace the names.

As we headed out of the park, we checked back in on the status of the new vintage map items. The Harveys bag sold out very quickly after release, but Spirit Jerseys were still available in all sizes, and Crocs in limited sizing.

Outside of the park, many guests waited to enter during the noon hour. Because of the park’s early closing the next day, many guests are opting to visit the park the day before or after the Cast event.

When we hopped over to Disney’s Hollywood Studios, we found more crowds and surprisingly long lines. Despite being considered the “slow season,” the parks were fairly busy today.

At the exit to Toy Story Mania, the gift shop has been closed ahead of its transformation to Jessie’s Trading Post. The store was previously only lightly themed with generic Toy Story decor.

Finally, over at Droid Depot, droid carrying backpacks are once again in stock after being unavailable. The cardboard carrying boxes included with a droid build only returned a couple days prior. The standard lightsaber carrying cases have yet to return to Savi’s Workshop, though.

Thanks for joining us on this busy day at Walt Disney World! Are you planning on buying (or attempting to buy) any of the new 50th anniversary merchandise? Let us know in the comments.