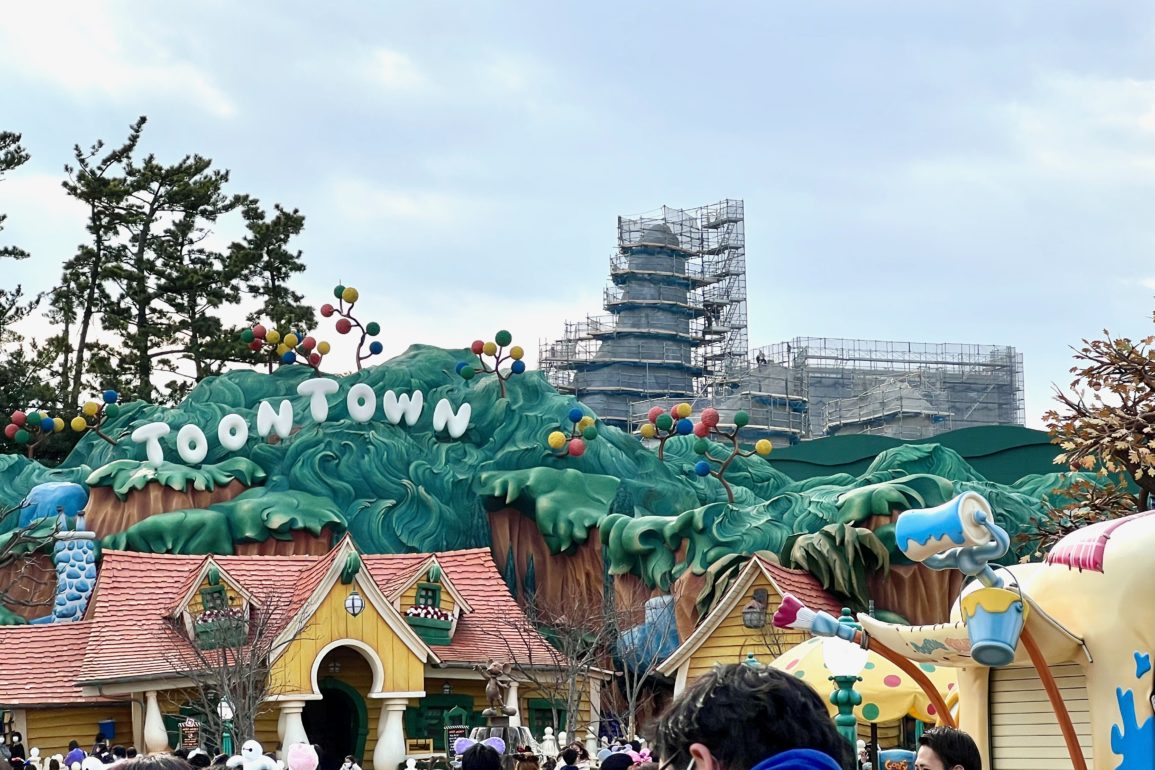 Although winter is the comparably quiet season here at Tokyo Disneyland, that doesn’t mean there aren’t a few things happening worth checking out! So let’s take a spin around the Kingdom of Dreams and Magic to get the latest.

First thing’s first, everyone knows you gotta walk past Bon Voyage to get to Tokyo Disneyland… but parts of it are currently under refurbishment. The giant suitcase handle and one of the exits are currently covered with scaffolds for some touch-ups.

The cupola has finally returned after a fairly long refurbishment. This actually came back at the end of January, but we haven’t been at the parks in a while.

Last month, Tokyo Disney Resort ended its Early Entry upcharge experiment at Tokyo DisneySea, now they’re trying it at Tokyo Disneyland. Guests who purchase can enter the park an hour early and gain access to all attractions in Tomorrowland. They can also pull Standby Passes early for Enchanted Tale of Beauty and the Beast and The Happy Ride with Baymax. Seems like for an upcharge, you should get full access to those attractions as well.

Despite being time for Totally Minnie Mouse, the flower bed still shows as Mickey in his classic style. At least he’s back to red and white!

With park capacity raised back up to 50%, the entire park is getting back towards being lively as ever. Even toward the afternoon, World Bazaar was bustling without feeling overly crowded.

The shade structure in front of the Crystal Palace is still under refurbishment after four months. Some things never change!

Most of the Crystal Palace itself is also undergoing exterior work. The outdoor patio in particular is currently unavailable, which is fine by us considering it’s still rather chilly.

During “Dreaming Up”, the Mad Hatter was missing yet again. He’s been gone for almost a week, per social media.

Tokyo Disney Resort just announced a seven month-long refurbishment of Pirates of the Caribbean. While the scope of this hasn’t been announced, we fear our days with the redhead are numbered.

Matcha-White Chocolate Popcorn has made its way to Tokyo Disneyland, in Adventureland. We were lucky enough to try this when it first debuted in early 2020, and you can watch Tom and Spencer try it on YouTube.

The Theatre Orleans meet-and-greet with Donald, Daisy, and Goofy in their “Let’s Party Gras!” costumes is set to close this week. Maybe a grand entertainment return is on its way? We sure hope so.

The Polynesian Terrace Restaurant is back once again, with a special Totally Minnie Mouse pancake set to boot! We weren’t huge fans of the pancakes when it first reopened in August 2020, so maybe this is one to skip.

The stagecoach-shaped Curry Popcorn cart seems to be under refurbishment, so a generic version is in its place for the moment.

Bit of a strange spot, but concrete work is underway in Westernland across from the Country Bear Theater.

Splash Mountain is also back from its annual refurbishment, and it looked as lovely as ever when we rode! There’s quite a few differences from the Walt Disney World and Disneyland versions, and you can check out our full POV video here.

The Orange-Chocolate Popcorn moved from Le Petit Popper in front of Enchanted Tale of Beauty and the Beast to the Castle Carrousel cart. But it’s still one of the best flavors at the park!

Exterior refurbishment is still underway at the Fantasyland restrooms and the former Pooh’s Hunny Hunt FastPass distribution space. But the restrooms themselves have reopened to guests, filling a massive gap in available facilities.

Unlike Mickey’s Toontown at Disneyland, our Toontown is remaining open with no changes and no Mickey & Minnie’s Runaway Railway.

Our Toontown construction focuses on Fantasy Springs over at Tokyo DisneySea, where the North Mountain from the “Frozen” area is extremely visible.

The former downtown area will live on in its original form, even as its transformed into the El CapiTOON Theatre at Disneyland.

Dinghy Drinks has quietly closed permanently, according to the Tokyo Disney Resort website. Vending machines across Toontown at Goofy’s Gas opened last year, likely as a replacement for a manned drink stand.

And that’s the latest from Tokyo Disneyland! Things are fairly quiet as the park prepares for its first real seasonal event next month. But we’ll be back either way to show off the latest and enjoy “Usatama on the Run!”

Are you excited to see more coming to Tokyo Disneyland this year? Let us know in the comments below!