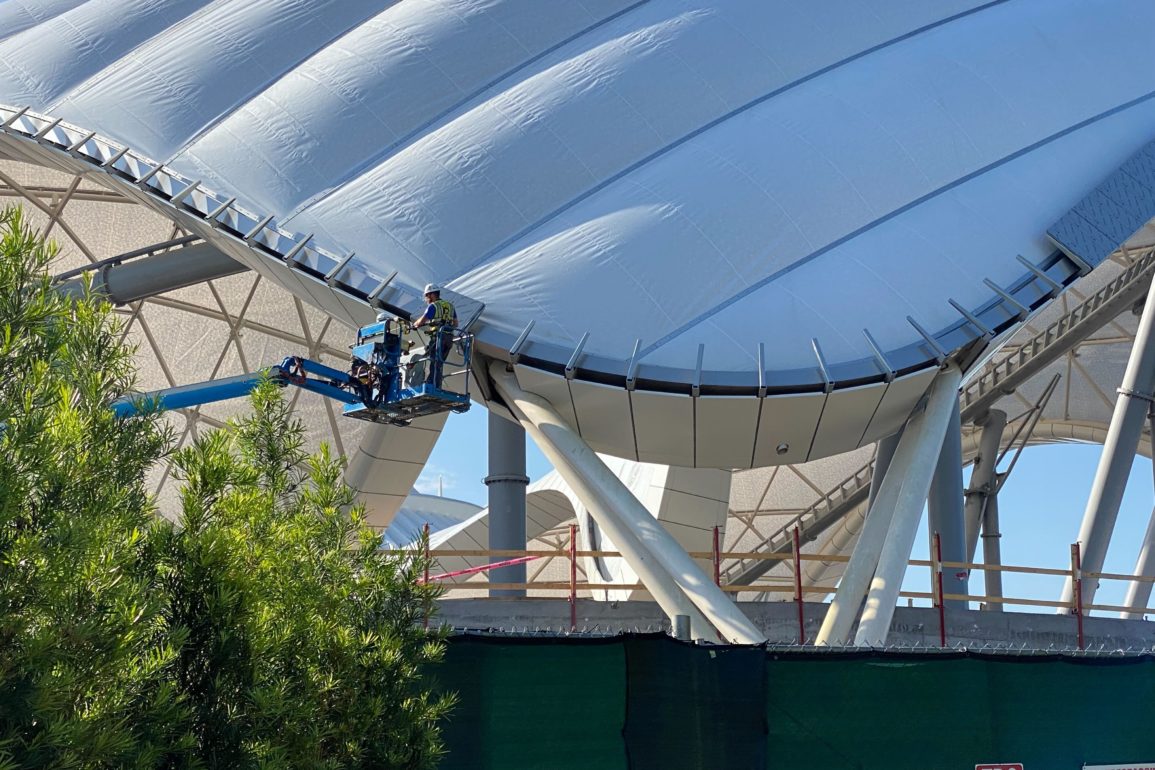 Almost the entire canopy of TRON Lightcycle / Run has been installed above the new coaster at Magic Kingdom.

Crew members are attaching strips of the canopy to the framework piece by piece. On our latest ride on the PeopleMover, we saw them working near the show building.

The blue netting is temporary while the final canopy is installed.

Three crew members were atop the canopy framework, pulling the new piece taut and securing it.

Paneling will also need to be installed along the edge of the canopy.

A second smaller canopy will create a sort of tunnel towards the attraction’s entrance.

The canopy not only shades the exterior portion of the coaster but will light up during the ride.

We could see crew members in a cherry picker installing some white paneling on the inside curve of the canopy.

Guests will walk under the coaster to reach the entrance of the ride.

The walkway has been paved, but final railings have yet to be installed.

A crew member was standing near a large crate today.

A second walkway — which connects to Storybook Circus — will go under the first. There are several wave-shaped walls sticking out from the first walkway now.

This second walkway has yet to be paved and is still just flat dirt.

A row of rebar to the left seems to be forming another wall.

The planter at the beginning of the walkway will hold a sign for the attraction.

Past the walkway will be the Walt Disney World Railroad tunnel.

A path lined with orange netting seems to outline where the train tracks will eventually go.

The tunnel will go beneath the walkway.

Several scissor lifts were up for working on the entrance canopy.

Two large crates were sitting near the scissor lifts.

We saw ride vehicles push-pull testing a few weeks ago but haven’t seen them since. They might be testing inside.

From Storybook Circus, we can see the lockers building for TRON Lightcycle / Run.

The building is almost entirely covered in grey paneling, but some green weather-proof sheathing is still visible.

Crew members have been working on this platform, but we didn’t see any today.

The entire canopy visible from this side has been installed.

White paneling is still missing from the edge.

The white panels will create a rounded look to the edge of the canopy.

Right now, there are several spokes pointing in toward the canopy. The next round of panels will go between these spokes.

There is no announced opening date for TRON Lightcycle / Run at Magic Kingdom.

Next
New Permit Filed for Show Scene Installation at Guardians of the Galaxy: Cosmic Rewind as Grand Opening Draws Near