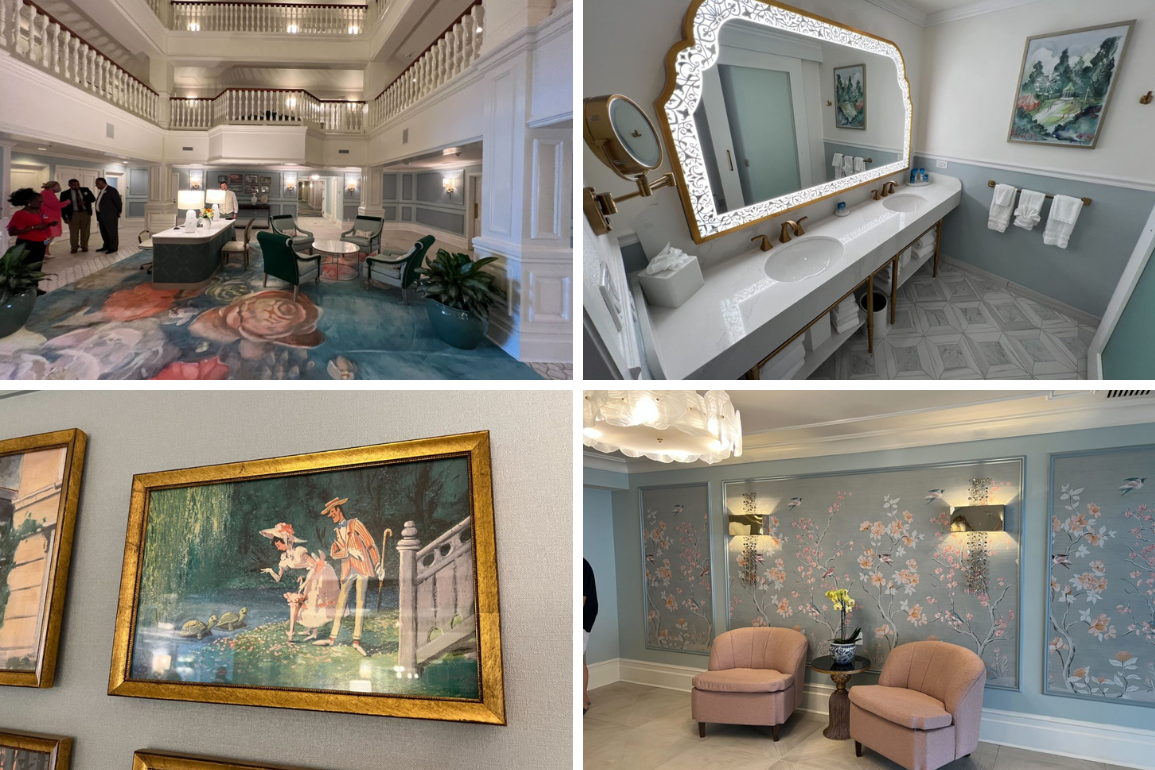 The Big Pine Key building has reopened at Disney’s Grand Floridian Resort after an extensive refurbishment. This building holds the new Disney Vacation Club resort studio rooms, which are the first guest rooms in the new style. The rest of the rooms will receive the same remodel later in the ongoing resort overhaul.

We’ve been watching for weeks as the exterior of the building was refurbished.

The stairwells were demolished and rebuilt.

The land around the building is devoid of plants and grass right now, but we expect to see landscaping completed soon.

There is a small porte-cochère at the entrance to the main building.

The entry has light blue walls and pink chairs.

Panels on the walls are painted with pink flowers and birds.

These chairs sit next to a small table topped with a potted plant.

The yellow flowers stick out of a blue and white pot.

The new furnishings and style match what we’ve seen in the other refurbishments so far, such as Cítricos and the Enchanted Rose Lounge (formerly Mizner’s).

Lights on the wall are silver with metal flower stems sticking out of them.

A different style of pink chair is on the other side of the entryway.

The floors are light brown wood.

A long table sits beneath a mirror.

The table is topped with bird figures, a bowl, and a vase.

The ceiling light looks like it is lined with giant transparent flower petals.

The entryway leads into the larger lobby, with hallways overlooking.

The elevators are to the left of the entryway.

The walls of the elevator bank are blue-green. The elevators have gold doors.

Inside, the elevators have white walls and golden railings.

The floor has grey and white tiles.

The ceilings have translucent chandeliers made of flower-shaped pieces.

The elevator walls are decorated with patterned panels.

There’s a mirror along the back wall.

There are blue panels at the bottom of the elevator walls.

Between the elevators are light fixtures with golden stems and white translucent leaves.

The shade is white.

Other wall lamps have boxy lampshades and stems with wider petals/leaves.

The lobby is lined with white columns.

It has a blue carpet covered with flowers.

White flower-like tile is around the edge of the carpet.

Green armchairs are gathered around a white marble-top table.

White throw pillows with flowers on them sit on the chairs.

The table has golden accents.

A black table is against one wall, with four clear legs.

On the wall above the table are several “Mary Poppins” paintings. The building and its studios join Cítricos in bringing the practically perfect nanny to the Grand Floridian.

A small white table at the center of the lobby is decorated with jars, sculptures, and glass bowls perched on golden stems.

There is a long dark green curved couch in one corner.

There are two chairs next to the couch.

A lamp carved with white roses sits on a flower-shaped table.

The chairs have a flower pattern on the outside and light green velvet where guests sit.

A standing lamp sits next to the other chair.

The couch is decorated with mismatched throw pillows with various patterns and textures.

There are two more pink chairs with pink velvet throw pillows next to a small white marble-top table.

Hanging above the lobby is a white chandelier.

It has glass panels around the outside and electric candles on the inside.

A golden and glass chandelier hangs from the ceiling.

The walls of the hallways are adorned with pink blossoms.

All of the resort studio doors are white.

Inside a refurbished resort studio, there is a marble-top table next to the entrance, below a circular mirror. We took a tour of a sample room earlier this year and the finished product is the same.

Behind the mirror, the wall is painted with green leaves, white flowers, and birds.

The mirror has a gold frame.

A blue velvet bench is under the table.

The edge of the bench has floral embroidery and the legs are gold.

The bathroom has a double basin sink, under-counter towel storage, and a shower/bath combination.

On the wall are a whimsical painting of a carnival and a hook. The towels are folded to look like a shell or perhaps a flower on the towel rack.

The bathroom has a backlit mirror edged in vine-like spirals.

To the left of the sinks is a swiveling makeup mirror.

The sink has golden faucets.

The under-counter storage is stuffed full of washcloths and towels.

The shower continues the theme with a golden shower head and handheld sprayer. The toiletries are wall mounted.

The bedroom has two queen beds and a nightstand between them.

There is a Mickey-shaped towel on the end of the beds.

The plush headboard is bordered with wood and includes a reading light on each side.

Between the balcony and the bed are another charging station and crystal-like lamp.

There is a small platform for phones and other items.

The window allows for a look at the Floridian flora and fauna.

The gold and white curtain rod holds up a thick tan curtain.

Disney Resorts have moved away from carpeting in guest rooms, but there is a rug under the beds.

The blue couch converts into a twin bed.

This room is being advertised as a model room.

These are the instructions on how to open and close the sofa bed.

The side table is also accented with gold.

Above the sofa bed is a watercolor painting of Mary Poppins gliding above Cherry Tree Lane.

Above the room are a paneled ceiling and golden chandelier.

The nightstand includes a phone, lamp, and Bible.

More accents of gold are on the nightstand.

The lamps have designs of umbrellas, butterflies, and flowers.

The flower design is continued to the wardrobe which has pink paneling and rose prints.

The inside includes two bathrobes, an extra blanket and pillow, slippers, and coat hangers.

The interior door has a mirror as well.

Upon opening the other wardrobe door, we discovered a hair dryer, an ironing board, a handheld steamer, and a safe for valuables.

The television is framed with white wood.

The tv sits across from the beds and above a dresser. The welcome channel is playing upon entering the room.

The dresser has more information about the resort, parks, and in-room dining. The remote is packaged in a plastic sleeve.

Below the coffee station is a mini-fridge.

The mini-fridge has two shelves.

The wallpaper behind the coffee station features more birds, umbrellas, and flowers.

The centerpiece of this wall shows Mary Poppins and the Banks family.

Even the vent is covered with a latticed, white-metal guard with designs of umbrellas (and a hidden Mickey!)

The renovated rooms from Big Pine Key at Disney’s Grand Floridian Resort is decked out with references to “Mary Poppins” and designed to suit a family looking for comfort and class.

Disney’s Grand Floridian Resort & Spa has been undergoing refurbishment to move away from the old Victorian style and toward a new, modern version (including the increased presence of IP). CEO Bob Chapek reportedly expressed his displeasure with the property, claiming it was not up to standard. Other aspects of the resort are on the slate for refurbishment, including Narcoosee’s (which closed on June 18 for work to begin) and the iconic main lobby.

Watch our full video tour of the refurbished Big Pine Key building and DVC studio below.

Let us know what you think of the refurbishment below!

Previous
VIDEO: Watch a Sneak Peek at Dress Rehearsal for ‘Harmonious Live!’ at EPCOT, Including a Gospel Choir Performing ‘Dig a Little Deeper’