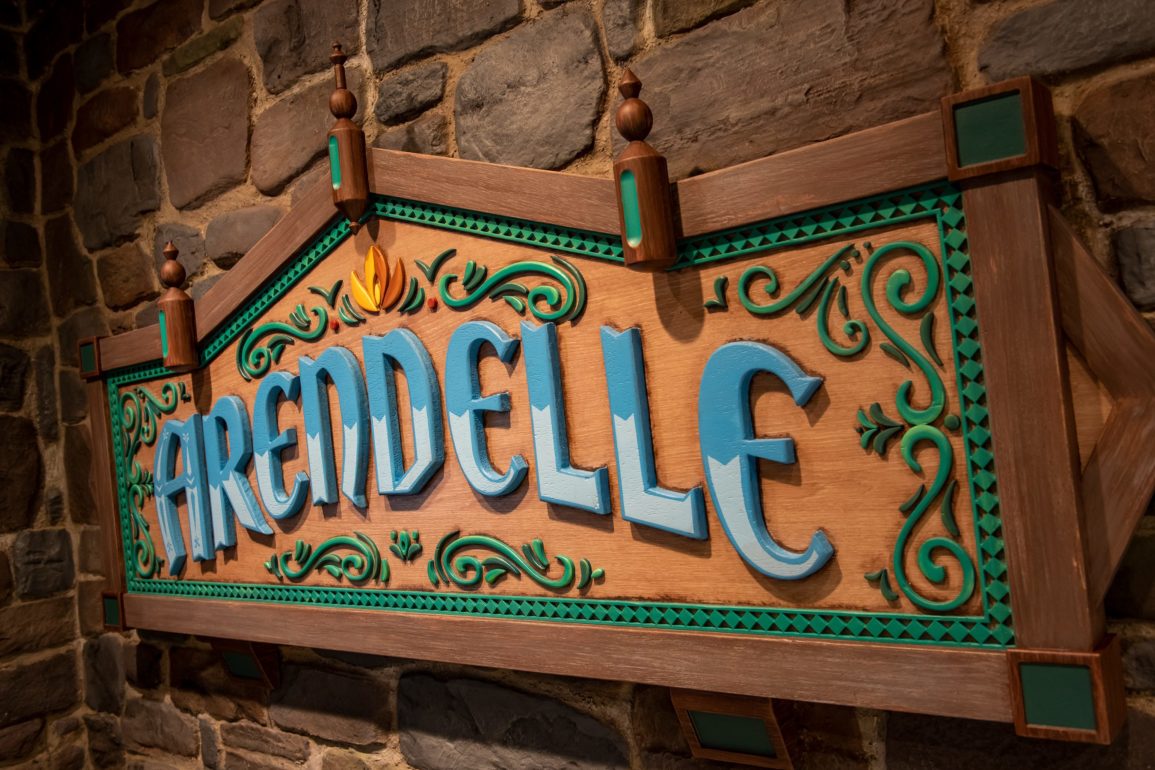 PHOTOS, VIDEO, REVIEW: Arendelle – A Frozen Dining Adventure is a Disney Wish Highlight, Even with a Broken Olaf (and Maelstrom Cocktails)

Journey with us to Arendelle for A Frozen Dining Adventure aboard the Disney Cruise Line’s newest vessel, the Disney Wish!

The entrance to Arendelle is near the Aft elevators. Once past the sign, there is an insanely long hallway that leads to the dining room, which is at the very back of the ship with a beautiful view of the outside world.

The beginning of the hallway features portraits of characters from Frozen 1 and 2.

The restrooms are very well themed inside, but sadly they were full of guests throughout our experience and we couldn’t get any photographs.

The second half of the hallway features paintings you may have seen in the films.

These beautiful busts of Anna and Elsa greet guests ahead of the dining room. We can’t help but wonder how much of this decor might appear in the Frozen lands coming soon to Hong Kong Disneyland, Walt Disney Studios Paris, and even Fantasy Springs in Tokyo DisneySea.

Arendelle is the only dining experience on The Wish where everyone is seated in the same room. This is simply because a show will be presented on the center stage and around the entire venue.

The interior is very charming, with artwork from costumes and buildings in the films appearing on the chairs and on the ceiling.

The place settings are very cute, really making you feel like you are dining in the castle of Arendelle.

I really wish they would sell these plates featuring portraits of Anna and Elsa.

Typically, the show features an impressive audio-animatronic Olaf that travels around the room. Sadly, during our cruise, he was not operating, so costume character Olaf was rushed in to fill the void. Reportedly the animatronic returned on the next cruise after missing the first two official ones.

Above is the official press image of the audio animatronic Olaf with its human assistant.

First off, the musicians are world class, possibly the best we have ever seen in a themed entertainment environment. The vocals, the arrangements, everything was perfect, all topped off by a violin solo of “Into the Unknown” that brought down the house.

This is essentially mixed in with a character stage show hosted by the charming and funny Oaken.

In what was a moment no one would have predicted, the boys are the ones singing “Let It Go”, which is a nice break from the usual.

The character do not really stop at tables for photos or the like, but they will roam around and wave and have short conversations with tables along the main pathways.

Overall, the show is great, and the mix of stellar performances with character appearances is sure to please guests of any age group.

You can watch our video of the full Arendelle: A Frozen Dining Adventure show (with “b-mode” Olaf) below:

The six-grain loaf and the French rolls were forgettable, but the roasted onion dip made everything better. I had expected a typical onion dip taste but this was a complex flavor provided by the onions actually being roasted.

The salmon was insanely dry and not at all smoky. The gravlax was fantastic, albeit typical for upscale cruise fare. The shrimp were tasty and well prepared; not overcooked as one might expect for a mass-produced offering. The lefse roll was the highlight of the dish. Although it was smothered in chives, once those were shaken off it was a tasty rollup of smoked trout with the piquant tang of a bit of horseradish. Very flavorful. Overall this dish was one of the more traditional “Arendellian” (or Nordic) offerings and I would recommend it.

A somewhat forgettable appetizer, although it was well prepared, there just wasn’t much flavor overall.

This was an impressive presentation. The puff pastry created a large bulbous top to the dish, and was in fact quite good in and of itself.

The two scallops immersed in the bisque were overcooked as we expected. The soup itself was fine but nothing special, so we weren’t very disappointed that it was a relatively small serving underneath the huge puff of buttery pastry.

This was a tasty tart, although ours wasn’t served as hot as we would have liked. Nonetheless it was well prepared, and the pear compote served its purpose as a sweet side to the savory ham and cheese tart. If you like quiche, you’ll probably enjoy this.

As opposed to World of Marvel, we were impressed with the effort to theme dishes here.

It’s traditional, yet palatable to most American tastes, a relative success. Everything was as fresh as it could be, making for a fine dish.

The lingonberry dressing was the highlight of this dish. Just the perfect amount of sweetness from the lingonberries made for a fantastic topping for rather lackluster greens. Again an example of trying to be fancy, the greens were somewhat bitter and we would have been much happier with some simple baby lettuce. The candied walnuts were tasty on their own which is how we ate them. All fo that said, it was a pretty good salad.

Surprisingly and unexpectedly good, which is probably a requirement to convince most people to eat carrot soup. It has a really thick consistency which may not be ideal for everyone at the table.

A rather mediocre soup, though the ham was flavorful enough. If it had more ham and some croutons I might have liked it more, but otherwise I’d pass on this and go with the carrot soup.

A nice, well-prepared pork medallion was the highlight of the dish. Prepared to a medium temperature, the pork was tender and juicy; a stark comparison to the pork entree at the Worlds of Marvel restaurant. The mashed potatoes were somewhat disappointing, requiring a bit more flavor and seasoning to make a good impression.

A great seafood entree option, the fish was perfectly prepared, tender, and not dry at all. So good in fact that we didn’t need the Mjod Vinaigrette at all. The vegetables were forgettable though, as they were quite overcooked.

This dish was the clear winner of the evening. The meatballs were fantastic: decadent, well-sauced, and tender.

What stole the show was the noodles with rosemary cream reduction. I could have eaten an entree of just the tender noodles. Although the name of the dish might be difficult to pronounce, don’t let that deter you from ordering it.

If you must go with a chicken entree, it will serve the purpose, but the bone-in chicken breast was somewhat difficult to cut, while the double-fried potatoes looked much better than they tasted. Maybe they sat around for too long before being served, but they were disappointingly limp and not crispy.

A fairly standard prime rib offering that could be had at your everyday hometown steakhouse. That being said, it’s a good option for a picky eater and the the double-baked potato was excellent.

This vegetarian offering is an odd rollup of thinly sliced vegetables.

The Aquavit Jarlsberg Cream was not enough to rescue the dish from the tasteless vegetables. It’s something different for vegetarians, but that doesn’t make it good.

A cabbage leaf stuffed with a “beef” and rice filling, this dish is a better choice than the vegetable rollup but not by a large margin. The plant-based beef doesn’t taste very good (weird, off-putting consistency), so I wouldn’t order these again.

A rather inedible combination of terribly-overcooked salmon atop what appears to be many of the same bitter greens in the appetizer salad, with a forgettable mustard-based dressing not helping anything.

The art of the dessert menu is very charming.

The best dessert of the bunch! The apple cake was warm and moist, accompanied by sweet, crunchy almond brittle, cool vanilla ice cream, and a rich caramel sauce.

These are quite simple, but surprisingly good and refreshingly different. It’s very shareable thanks to the presentation style. It’s similar to a Lefse as it is slightly sweet, very subtle in flavor, along the lines of a crepe.

The white chocolate cheesecake was good enough, but the pancakes with cream are the highlight.

This looked like it would be something like a Napolean in flavor, but turned out to just be a subtle cake with hints of almond from the meringue.

This was a pretty basic chocolate cake with toppings thrown on it. Very one note, very unremarkable.

Fro being a no-sugar added dessert, this was perfectly fine compared to the others. It has a subtle lemon flavor with a. more profound taste of almonds. The accompaniments were nice and fresh as well.

As stated in the other reviews, each restaurant on The Wish has a sundae for dessert. This was the worst of the three for us, as the marshmallow consistency didn’t blend well with the ice cream. Other than that, it’s just mint chocolate chip ice cream which you could have anywhere.

Yes there is a Maelstrom trio…

Your basic, sweet cocktail you expect from Disney. It does the trick if you are into such drinks, but obviously stay away if sweet isn’t your thing. I will say, it was less syrupy in texture than some similar beverages we’ve had, which is a positive.

This was super strong. This is a great cocktail if you want to feel a good buzz after just one drink, but it probably could be mixed better.

This was delicious! Any fan of a good whiskey sour will likely find pleasure in this cocktail. There is definitely unadvertised sour mix in this, but we found no taste of coriander and no physical traces of it (it was likely muddled in).

Despite not saying it, the Northern Sour from above is definitely the Linie Aquavit cocktail on this board named after the now-defunct EPCOT attraction replaced by Frozen Ever After. The entire thing is served on a large wooden board.

What was labeled simply as Einstock Beer appears to be their lager, brewed with Citra and Citra-cryo hops. As advertised, it has a hoppy and citrusy taste that many find appealing. It was a big hit with the beer drinkers at our table.

The Viking Mjod Mead was essentially a sweet beer, perhaps overly so for our taste.

Arendelle: A Frozen Dining Adventure was probably the highlight of our entire cruise as far as dining is concerned. The food and drink was good enough, but the show was loads of fun and was more enjoyable for adults than we might have thought it would be. With a beautiful venue, well-themed and good cuisine & libations, and a rousing show that doesn’t fall into the usual Frozen stage production expectations, this is sure to be a royal celebration everyone will enjoy.

For more from aboard the Disney Wish, check out the following: