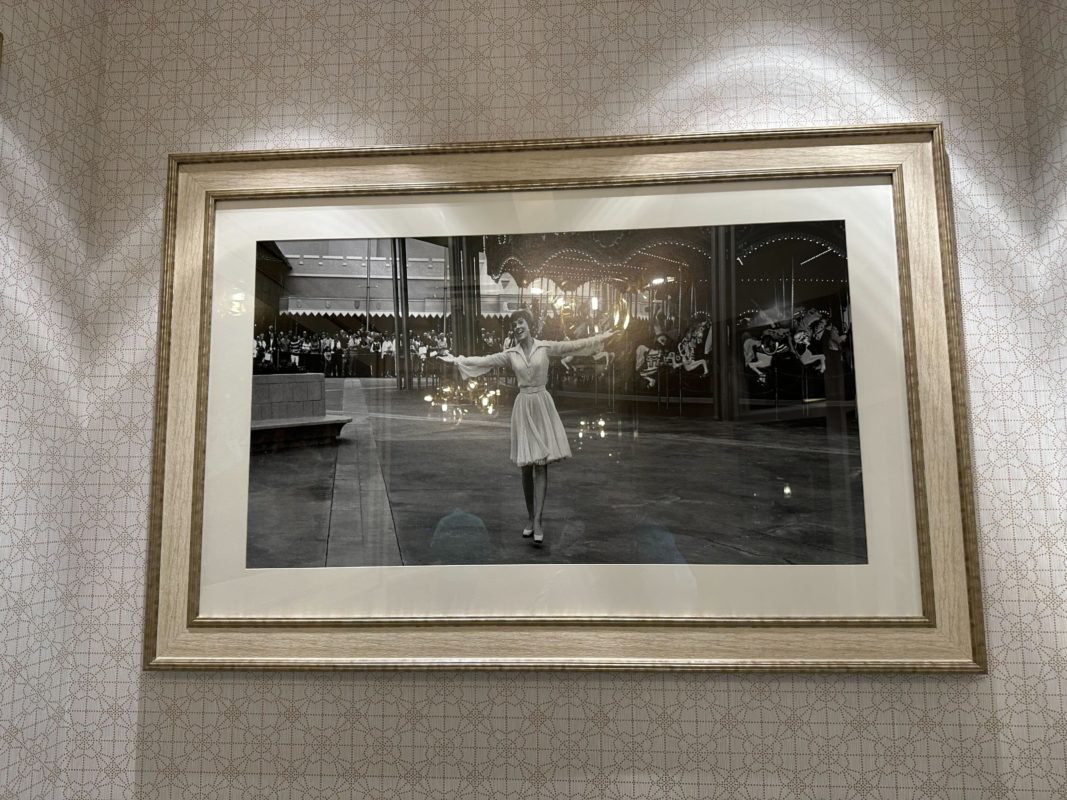 Two weeks after the grand opening of the Carousel Coffee at Disney’s BoardWalk Inn, a few more decorations have been added to the otherwise bland shop.

Carousel Coffee is located in the lobby, replacing Dundy’s Sundries, which closed permanently in October.

A black-and-white photo of Cinderella Castle has replaced a photo of Goofy riding Mad Tea Party, which we criticized in our first post.

The photo wouldn’t be much more than a stock photo of the castle, except that Julie Andrews is standing at the entrance, putting this at the opening of Walt Disney World. Specifically, it’s from the grand opening TV special. We don’t know what she has to do with boardwalks, carousels, or coffee — but at least this is a more interesting historical moment than a photoshoot with Goofy.

A random table and two chairs have been added to this nook.

Another framed photo of Julie Andrews performing during the grand opening is nearby. In this one, she’s actually singing in front of Prince Charming Regal Carrousel (then known as Cinderella’s Golden Carousel).

Also new is an overhead photo of the Mad Tea Party at Disneyland.

This color photo of Prince Charming Regal Carrousel was already here at opening.

The next change comes at the seating area a few steps outside of Carousel Coffee.

There are now succulents in marble pots on the tables.

There are multiple different types of succulents, some pink, some red, and some green.

And we know what you’re thinking but please don’t steal the succulents.

The interior of Carousel Coffee added fuel to the fire on the current hot-button issue amongst Walt Disney World fans: the removal of theme and story from Walt Disney World Resort Hotels. Of course, it has been discussed for years with the addition of “bland” new resorts such as Riviera and the remodeling of old favorites such as Yacht Club, the Contemporary Resort, and more. Now, with the lobby refurbishments looming at Disney’s Grand Floridian Resort and just outside these walls at the BoardWalk, fans are anxious about the future and if the touches and themes they love so much about these enchanting escapes will be erased in the name of industry-standard hotel design.

See the full Carousel Coffee menu with prices here. The coffee shop is currently scheduled to be open from 7:00 a.m. until 4:00 p.m. daily. Check out our review of the Cinnamon Bun Frozen Blended Coffee, Crunch Raspberry Danish, and Mickey & Minnie Sugar Cookies.

The new shop and seating area are part of a larger refurbishment effort at Disney’s BoardWalk. Belle Vue Lounge was also remodeled recently, and the guest rooms are set to be refurbished as well. Outside the Inn, BoardWalk Deli has replaced the old bakery, the ESPN Club is becoming the Cake Bake Shop, and BoardWalk Ice Cream opened in 2021 where Ample Hills Creamery used to be.