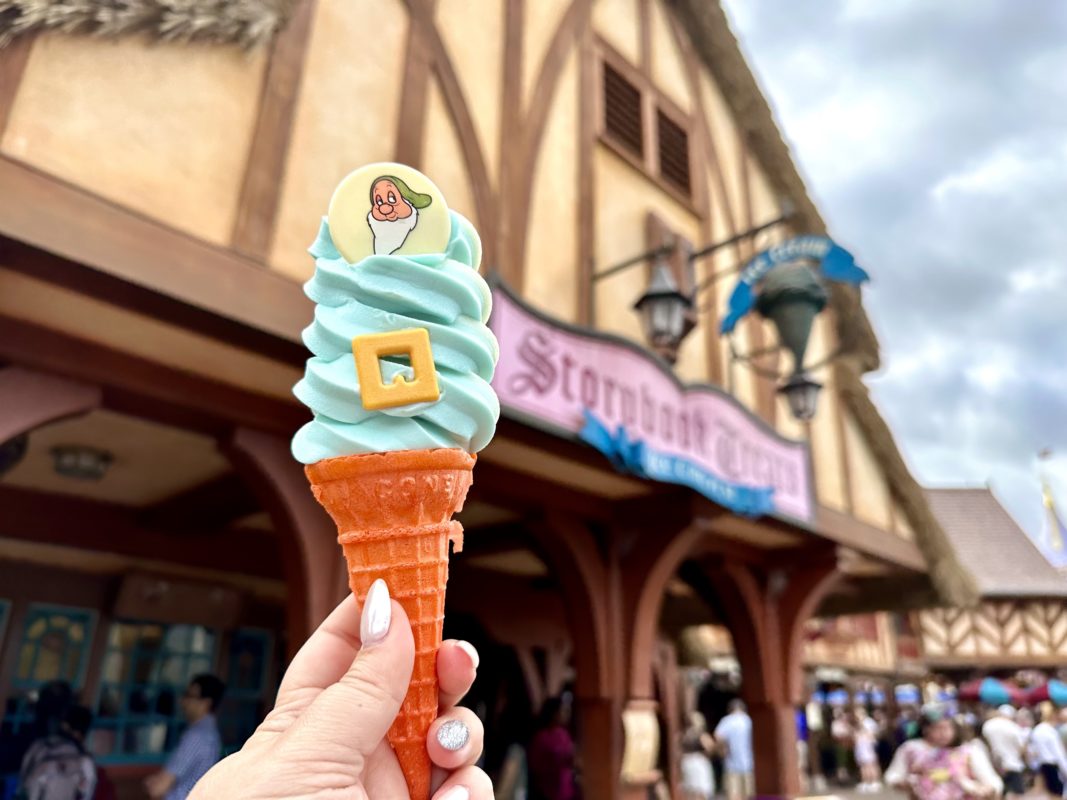 Happy New Year from Magic Kingdom! It is a brand new year and we can’t wait to see all the new things to come this year at Disney parks. New limited time 50th Anniversary treats have been released in Magic Kingdom today and we plan on trying them all. We also plan on doing some shopping to see if there is any new merchandise. Without any further ado let’s get started.

We are so happy that the Main Street, U.S.A. train station is now open and we can get this great view of the park.

First we decided to stop into the Emporium to see if we could find any new merchandise. A new light up Grogu glow wand is now available.

There were two new mugs available in the Emporium. The first mug features Disney princesses, Rapunzel, Cinderella, Tiana, Merida and Belle. Inside the mug states, “Moments Together.”

The second mug features Winnie the Pooh and Piglet. On the other side of the mug has the writing, “Good morning sunshine.”

More Disney 100 merchandise is arriving in the parks. A new youth Disney 100 T-shirt featuring Minnie and Daisy is now available.

We spotted this new Jungle Cruise T-shirt in the Emporium. The shirt features a Jungle Cruise boat, hippo and python from the attraction.

We checked on the TRON Lightcycle Run construction. We noticed the gear clock, electrical tower, and signage has been removed from Tomorrowland Light & Power Co.

In Bigtop Souvenirs a new 2023 2-piece die-cast bus set has arrived in time for the new year.

It’s time to start trying the new 50th Anniversary treats that were released today! First up we stopped by Gaston’s Tavern and tried the Minnie Mouse Dome Cake.

At Storybook Treats, The Seven Dwarf cone featuring Sleepy is now available. This is the seventh and final cone to be released for the 50th Anniversary. The Sleepy cone features blue cotton candy and vanilla soft-serve ice cream.

Malasada features flavors of Hawaii with a mango-coconut sauce.

At Golden Oak Outpost, the 50th Anniversary Loaded Chicken Strips is now available. The chicken strips are topped with cheese sauce, bacon and green onions and comes with french fries.

Our final treat of the day was the Bear Tracks Churro that we found at the churro cart in the hub. The churros are served with marshmallow cream, chocolate sauce and candy bar pieces.

That’s all for today. Thanks for following along with our day!