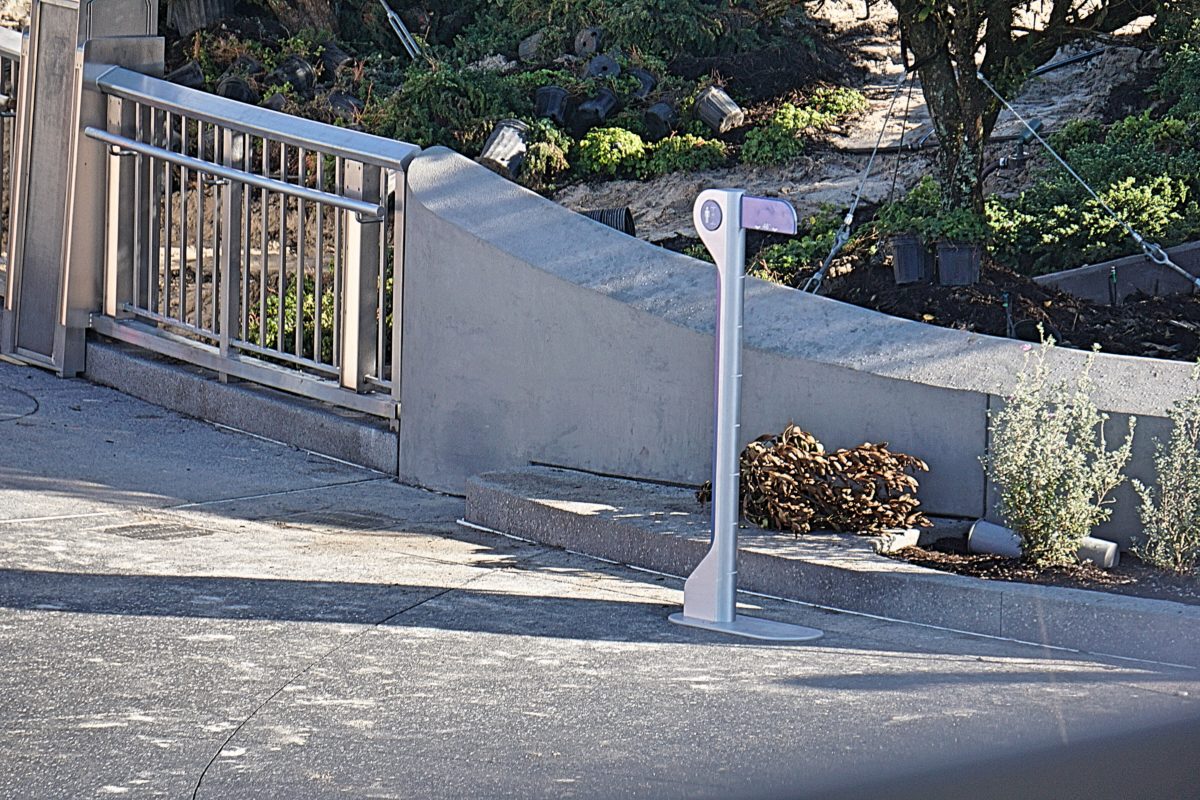 With the opening of TRON Lightcycle/Run at the Magic Kingdom rumored to be sometime in early April, we went to check out its progress. While riding the Walt Disney World Railroad today, we noticed a height requirement sign added.

The silver and blueish-purple sign has a medallion on one side with a figure of a person standing erect, showing how guests should be properly measured. On the other opposite side is a curved marker with two arrows indicating the height minimum and 48″ in between those arrows.

A restrooms sign has also been added above the entrance as well.

Meanwhile, the Imagineers are still running the ride vehicles with test dummies. However, as of last month, they started testing the attraction with people as well.

On Christmas Day we even got a sneak peek at a nearly completed attraction when the hosts of Good Morning America rode the attraction as part of the Disney Parks Christmas Day Parade broadcast.

Here we can see the themed sign for the restrooms with the symbol for the attraction on the far right.

Workers continue to make progress on the ramps leading to and from the attraction. Planters are nearly completed and just waiting for landscaping.

Here’s another look at the newly installed height requirement sign from the Tomorrowland Transit Authority PeopleMover.

Last week we reported that construction walls have finally come down at Tomorrowland Light and Power Co. and now there seems to be a security guard posted outside the building.

Here’s an overall look at the progress of the attraction.

Work also is continuing on the other side of TRON Lightcycle / Run.

Coming through the tunnel we can see the massive structure from the underside.

The track comes quite close to the ground.

When TRON Lightcycle / Run opens it will be one of the fastest coasters at any Disney theme park in the world.

Check out some of our other progress reports on TRON Lightcycle / Run:

Are you excited to finally get to ride this highly anticipated attraction? Let us know in the comments below.