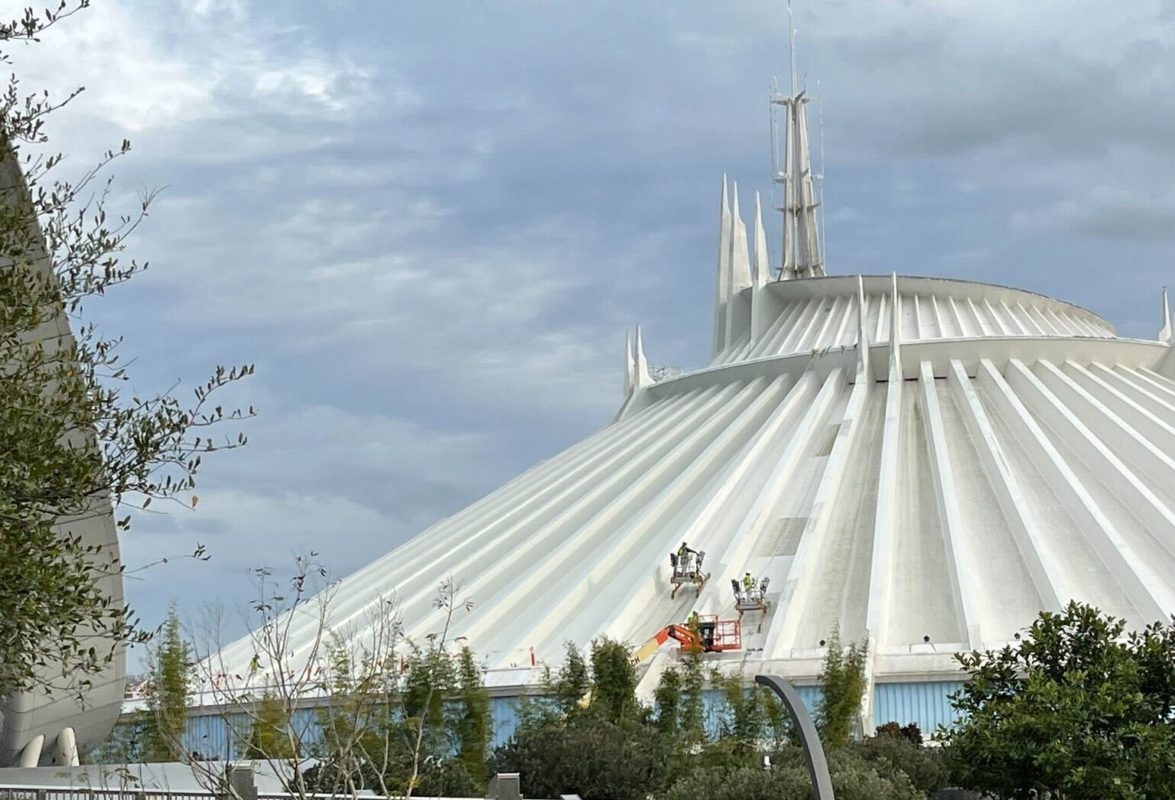 It’s cleanup time here at Walt Disney World, following several instances of public backlash in the past month regarding cleanliness issues around the parks. Just over two weeks ago, we reported on crews beginning a cleanup of Space Mountain at the Magic Kingdom, and now work is progressing to get all that dirt and grime off the iconic structure’s exterior.

Crews seem to be hard at work power-washing the exterior of the mountain. A cherry picker is raised to the lip between the base structure and its towering roof to allow crews access.

Crews appear to be power-washing the gritty building exterior in stages. Years of dirt, dust, and grime are caked on the Space Age-esque white exterior. We can see rectangular sections where crews have already power washed the exterior, with some sections still left unwashed for comparison.

Temporary platforms have been erected along the sides of the mountain to keep crews stable while they use power wash equipment. A cable appears to run up the entire length of the building to allow the platform to be moved to access the higher levels.

This cleanup may take some time, but it’ll be none too soon with attention descending from all over to its nearby neighbor in just a couple months time with the grand opening of TRON Lightcycle / Run on April 4. Riders will be able to visit The Grid even sooner though if they’re Cast Members, with the first previews beginning February 6.

Cleanup has been something of a contentious issue of late around Walt Disney World, with the controversy kicking off late last year as the “it’s a small world” boats were found to be turning black from filth and grime. Before long, reports came flooding in about caked-on dirt aboard the Tomorrowland Transit Authority PeopleMover, mold on Toy Story Land props, and the sad state of the Walt Disney World Monorail system.

Are you excited to see Space Mountain get a good scrubbing? Let us know in the comments below!

TONIGHT on WDW News Tonight (1/19/23) – The Price is Right, Remembering Splash Mountain, and a BIG Surprise